Wild Rose isn’t about about giving up on dreams, it’s about making compromises. 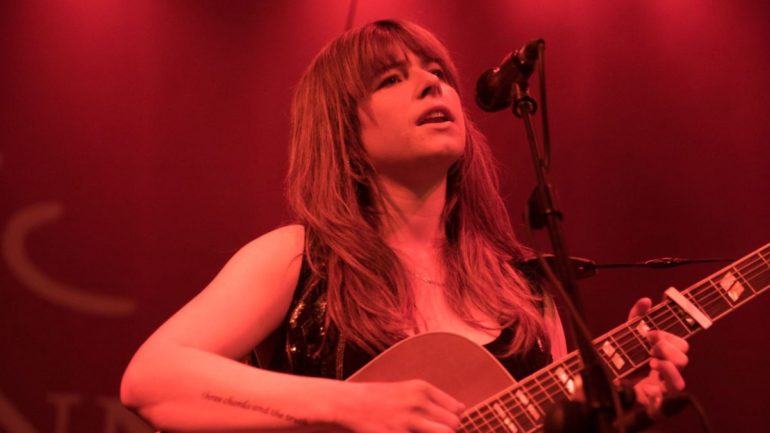 A common misconception of Johnny Cash is that he spent time incarcerated. Although the country legend never actually spent any real time in prison himself – save for his famous and controversial live album recording at Folsom prison, the influence is clear in Wild Rose’s opening scene.

We see Rose (Jessie Buckley) leaving the correctional facility she has just spent a year in. She collects her belongings (including a map of Nashville and a garish white and blue Western outfit), has her ankle bracelet fitted, and leaves with her head held high. All that’s missing is a magnificent steed, it seems.

It’s an opening sequence that certainly sets the tone for Wild Rose, a film about a feisty redhead (in every sense of the word), who embodies the outlaw country spirit that Cash was associated with. Jessie Buckley’s performance is cathartic and breathtaking, a no holds barred, tour de force portrayal that will surely, much like her characters chief desire, lead to her name in lights.

What I found so endearing about Wild Rose is more about what it has to say on dreams, and facing the reality of the situation you find yourself in. It is a film that shares stark similarities with others that focus on depicting the trials and tribulations of a musician, such as Inside Lllewyn Davis and Crazy Heart. While those movies focus on the lives of fading musicians, struggling to move on from past glories, Wild Rose’s focus is on that of a burgeoning talent, a blossoming flower, if you will.

At heart, these films are an exploration of social realism, a quality that is as much a driving force behind the story as the pursuit of passion that exists within the central character. What sets them apart from conventional musicals is their non-linear approach to storytelling, and the desire to expose the often harsh realities of being a professional musician, and the road it takes to get there.

It’s a long, demanding road full of twists and turns in the form of failings, self doubt, and empty promises. In Crazy Heart, we see the profoundly negative effect it can have on your personal life. With Inside Llewyn Davis, we see how it affects your relationship with others. But what we see in Wild Rose, is how detrimental it can be to your family.

What makes these films unconventional in their approach is a desire to tell an honest and provocative story. They’re more than simply an entertaining visual spectacle. Like the best musicians, they have something to say.

At the other end of the spectrum, there’s modern musicals. Despite featuring similarly themed storylines, their habit of glossing over the less desirable aspects of notoriety creates an entirely unrealistic representation which, considering the scope and influence of these movies, could even be deemed as irresponsible.

Famed for their glamorisation rather than their realism, the often defining characteristic – apart from their songs – is the perpetuation of stardom, a notion that the main character, or characters, won’t find fulfillment until they have achieved their dreams.

The narrative often plays second fiddle to the films real showpiece: the songs. While these are often a means of expression for the character, they offer little in terms of actual character development, usually operating simply to highlight their characters desperate need for attention. If you’re not a fan of hyperbolic numbers, the end product is often (frankly) irritating.

An interesting film to note, and one that seems to have a foot in either category, is La La Land. It’s one that breaks away from conventions and offers something a little different.

The songs featured serve multiple purposes. At the forefront, they are a means of character expression and a visual spectacle, coupling expertly choreographed dance sequences with an effervescent colour palette. They’re also a means of escapism, a way for Sebastian (Ryan Gosling) and Mia (Emma Stone) to distance themselves from the doomed nature of their relationship. Their aspirations for the future directly affect this relationship, offering similarities to the struggles depicted in Wild Rose.

Mia toils against the stagnant nature of her career, while Sebastian’s decision to choose financial stability over his dream of opening a jazz club is damaging both on a personal level, and to their relationship.

While there’s aspects of a conventional musical, there’s unfamiliar realism, and a welcome lack of glamorisation. Ultimately, it shows us the cost of dreams, with the final scene truly enforcing this for the viewer.

Rose’s dream of being a country star in Nashville, Tennessee, is constantly on the edge of derailment by the obvious fact that she is a mother to two young children, a factor that for a large majority of the story seems almost lost on her, were it not for the near constant reminder of her mother (Julie Andrews). Indeed, it isn’t until she is faced with the very real prospect of giving up on her dream that she finally gains some perspective on her situation. Ultimately, it all comes down to being realistic. Rose has to at least begin her journey to realise what she’d lose, should she continue on the road. In the end, her experience gives meaning to her craft, and we see this take form in her original song, No Place Like Home.

Wild Rose isn’t about about giving up on dreams, it’s about making compromises. It’s unique, because it shows us that while the grass may always seem greener, sometimes, just a taste is enough. In a sea of sickly musicals, it’s a breath of fresh air.