Home
Gaming
Why Is Six Days In Fallujah So Controversial?
Gaming
·6 min read

Why Is Six Days In Fallujah So Controversial? 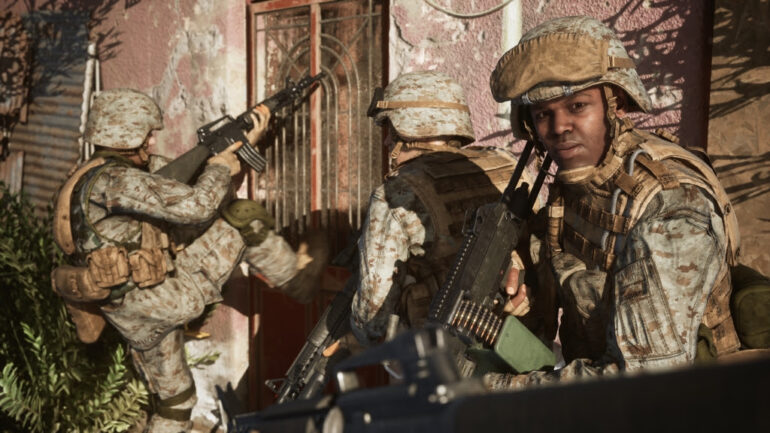 Victura and Highwire Games have announced that they’re making Six Days In Fallujah, a project that was originally announced by Atomic Games and Konami back in 2009 before being dropped by its publisher. There’s a trailer at the top of the page, if you want to check it out, but there are plenty of questions as to what Six Days In Fallujah is, why it was so controversial and whether or not it’ll repeat its same mistakes.

Why Was Six Days In Fallujah Dropped?

The game was removed by Konami to due to the controversy surrounding the depiction of the real life Second Battle of Fallujah, which took place during the Iraq War in 2004. Many feared that video games wouldn’t accurately convey the seriousness of that event, which at the time, they were probably right. This is a world that was still pre-No Russian, and that didn’t exactly sit well with a lot of people when Modern Warfare 2 dropped. For a lot of people, Six Days In Fallujah sounded like No Russian but based on a real life war, which naturally set off alarm bells.

At the time of its cancellation, a Konami spokesperson had this to say: “After seeing the reaction to the video game in the United States and hearing opinions sent through phone calls and email, we decided several days ago not to sell it. We had intended to convey the reality of the battles to players so that they could feel what it was like to be there.”

One of the key groups speaking out against the game was the Stop The War Coalition peace group, who stated to TechRadar (via GamesIndustry.biz) that making a game “out of a war crime and to capitalise on the death and injury of thousands is sick”. They also cited that an estimated 1,000 civilians died from the bombardment and raids, and shared the fact that “the town’s football stadium had to be turned into a cemetery to cope with all the dead bodies”.

Of course, the game had its fair share of supporters, with former SAS soldier Andy McNab arguing that war had been used for entertainment by the media for years, arguing that the events in Fallujah as far as the Americans are concerned are like “folklore”, along with the point that American’s Army has been simulating real-life events like this for years.

Why Would Six Days In Fallujah Be Revisited?

It’s an interesting question, honestly. Victura is a publishing company created by former Atomic Games/Destineer CEO Peter Tamte, and the press release about this announcement states that the company was created “with the goal of bringing a new Six Days in Fallujah to players”. Seems like Peter is determined for this game to see the light of day.

In the same press release, Tamte shares this interesting quote: “It’s hard to understand what combat is actually like through fake people doing fake things in fake places. This generation showed sacrifice and courage in Iraq as remarkable as any in history. And now they’re offering the rest of us a new way to understand one of the most important events of our century. It’s time to challenge outdated stereotypes about what video games can be.”

The official website also includes a section on why the developers believe this game is necessary, stating that: “When we originally announced Six Days in Fallujah in 2009, we learned that some people believe video games shouldn’t tackle real-life events. To these people, video games seem more like toys than a medium capable of communicating something insightful. We disagree.”

The statements goes on to say: “Throughout history, we’ve tried to understand our world through events that happened to somebody else. Six Days in Fallujah asks you to solve these real-life challenges for yourself. We believe that trying to do something for ourselves can help us understand not just what happened, but why it happened the way it did. Video games can connect us in ways other media cannot.”

Industry insider Daniel Ahmad took to Twitter to speculate that the reason why Six Days In Fallujah is back is due to US Army recruitment being at an all-time low. While that’s not the confirmed reason, and is just conjecture on his part, the US Army’s ties to gaming have only increased over the past decade.

I couldn't possibly guess why Six Days in Fallujah is being revived at a time when US army recruitment is at an all time low.

This reboot is from the same people that worked with the FBI and CIA on training systems and is basing its game on excusing US war crimes. pic.twitter.com/5H8vVqKh9s

There was that whole fiasco with the US Army Esports Twitch channel that was nothing more than a recruitment drive for the Army, just for one quick example. Call of Duty’s ties to the US Army are also well documented, so another military shooter like this is always going to conjure those same feelings.

How Is Victura Going To Avoid The Same Pitfalls As Before?

It would appear that Six Days In Fallujah is going down the route of “authenticity”, with the fact that over 100 marines, soldiers, and Iraqi civilians who were present during the Second Battle for Fallujah have been involved with the game’s development. They’ve shared first-person accounts, photos and video recordings with the team, and the game will include documentary style interview footage with these people.

Former Marine Sergeant Eddie Garcia, who was wounded during the Battle for Fallujah, and was the one who pitched the idea for the game in the first place back in 2005, said this in the press release for today’s announcement: “Sometimes the only way to understand what’s true is to experience reality for yourself. War is filled with uncertainty and tough choices that can’t be understood by watching someone on a TV or movie screen make these choices for you. Video games can help all of us understand real-world events in ways other media can’t.”

As far as gameplay goes, Highwire appear to be quite capable when it comes to making first person shooters, as it was founded by former Halo and Destiny devs. Jaime Griesemer was a lead designer for the original Halo games and Destiny, while Marty O’Donnell is the legendary composer behind Halo and Destiny. Jared Noftle also helped co-found Airtight Games.

The original developers behind the game were Destineer, of which Tamte was the CEO. Back in 2005, Destineer already had quite prominent ties to the US Military, as they were developing “Judgmental Shooting Simulators” for the CIA and FBI. Six Days In Fallujah was set to use those simulators as a basis for its combat, which isn’t a good look. However, the Variety article that mentions this also mentions how hands-on Tamte was responsible for the decision to use the Atomic Games brand, not Destineer’s. Whether that’s an attempt to cover up the links to the CIA is unknown.

Tamte himself was also a former VP of Bungie, so that might explain why Griesemer and O’Donnell are working with him today on the Six Days In Fallujah reboot. While it might be trying to shake off the controversies of the original iteration, the fact that Tamte is still involved irrevocably ties Six Days In Fallujah to that original iteration and the issues it faced.

Will Six Days In Fallujah Be A Success?

It’s hard to tell. Since its cancellation, there have been games like Spec Ops: The Line; military shooters that aren’t afraid to tell stories that avoid the overly-patriotic nature of games like Call of Duty. Perhaps Call of Duty’s most relevant transgression to this story is when Modern Warfare caught flak for retelling the Highway of Death, changing it so that the Russians bombed civilians instead of the Americans.

If Six Days In Fallujah can tell both sides of the story, along with the effects that the Iraq War has had on everyone involved, instead of just being the typical “kick down door, kill insurgent, rock flag and eagle” that Call of Duty all too often is, there could be some hope for it. As much as video games have grown to tell more emotional and morally nuanced stories, I’m not hopeful. This could be a genuine attempt to recreate the experience of military personnel in active combat, or an exploitative attempt to use real-life experience of marines, civilians and others to recruit more potential soldiers.

Either way, Six Days In Fallujah is scheduled for release on PC and consoles this year, and some press will apparently have impressions of the game out next month. We should find out more then.