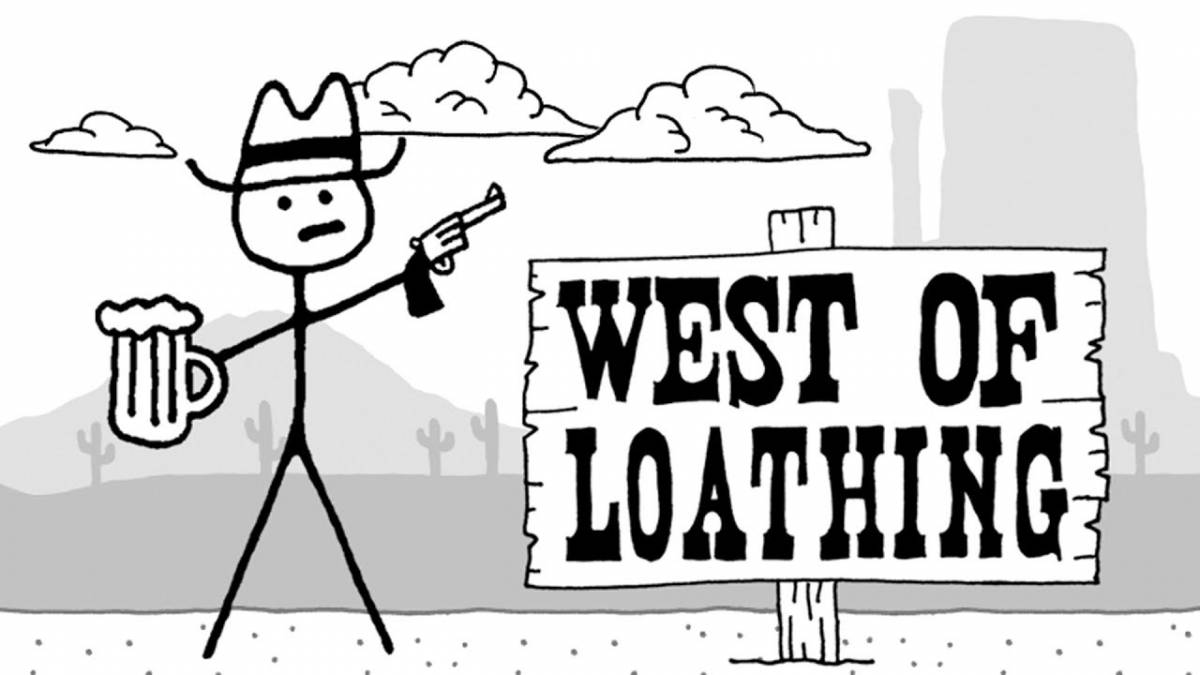 If you head over to Steam and have a look at West of Loathing, you might not really understand what you are looking at. It looks like nothing at all. It’s just stick figure drawings on a plain white background, yet somehow it’s rated Overwhelmingly Positive with 800+ reviews. What’s going on here?

Well as it turns out, West of Loathing is actually a fantastic game.

Created by Asymmetric, a studio that consists of around five or so nerdy internet guys with a real sense of humour, West of Loathing is a mix between the RPG and Adventure genres, and is set in the Wild West, with cowboys and saloons and all that good stuff. As expected, its most unique feature is it’s visual style. It’s entirely black and white with stick figure drawings for everything in the game. It looks like it’s just a bunch of doodles, but it isn’t pure laziness – it’s deliberately going for a very simplistic look, and it does work quite well with the overall silly tone of the game. And despite the characters being so basic, the animation of the stick figures is quite successful in making everything much more expressive. It’s stick figures at their best.

The main draw of the game is its humour and writing. Everything in this game is funny. And I mean it, the game is genuinely really funny, in a very witty and clever way. It’s not one-note, either – there’s elements of parody, word-play, slapstick, absurdism, recurring gags, bad puns, subtle deadpan delivery, satire of video game tropes, satire of Wild West tropes, general silliness, etc etc; the whole spectrum of comedy is present in the writing of this game, and there isn’t a single element of the game that doesn’t contain some kind of joke. Even the graphical quality settings in the options menu is a joke, which was amazing because it caught me off-guard. I wasn’t expecting to be laughing before I even created my character.

The game is worth the price of admission ($11) just for that alone. You can use this game purely as a joke delivery mechanism and be entirely satisfied with it. But there’s more to it than that – it’s not purely jokes with no substance. The game actually does try to have some deeper intrigue to it as well. There are a few serious notes sprinkled throughout to add a bit of depth to the world, and there are a lot of cool world-building elements hidden throughout the game if you go looking for them.

The gameplay of West of Loathing is sort of a cross between RPG and Adventure genres. For the most part, West of Loathing follows the tropes of an Adventure game, where you wander around scenes, talk to characters, learn about mysteries, find clues to solve puzzles, and so on. You explore around saloons, mines, ranches, cemeteries, and it’s just fun to poke around, trying to pick up every item and talk to everyone you meet. The areas are small enough that exploring them is not tiresome, but they’re filled with enough stuff to make it worth your while to try and find everything. Your curiosity is always rewarded with items, stats or at the very least some funny text, and sometimes the most hilarious writing is hidden in the most obscure places.

The RPG side of things comes into play with your stats and items. Often the rewards for solving puzzles are gear or consumable items that raise your stats, which determine your strength during combat. The combat system in this game is rather simplistic, but it works well enough. It’s standard RPG combat – you select a skill, select an enemy, and watch the HP bars go down. Often combat can feel like a foregone conclusion – either you’re obviously strong enough to win without much effort, or you’re too weak to win, and need to either level up or change equipment and try again. There are very few random elements to combat, so it’s purely a numbers game that determines if you can win or not. There isn’t a whole lot of depth to it, but you will need to pay attention to your skills and equipment if you want to do well. 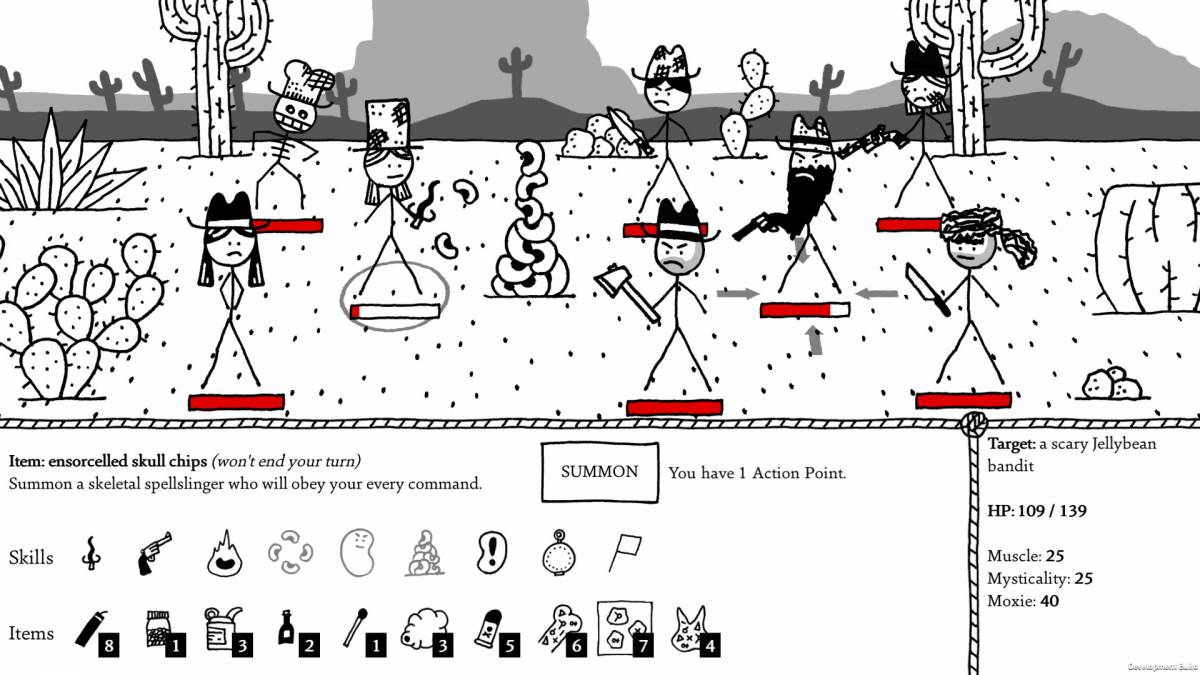 Asymmetric understands that RPG combat can sometimes be really annoying, so they have tried their best to address common annoyances. Firstly, there are no random fights that appear as you walk around. You can see every enemy before you engage, and you can even choose to not fight if you’re not ready yet. Your HP is fully restored after every fight, which removes the need to heal all the time. They also included a ton of usable items such as dynamite that will deal damage without ending your turn – so if you’re really stuck on a tough guy, you can just buy a ton of dynamite and keep chucking them until you win. It works to the game’s favour in that you’ll never be truly stuck, but it can make the fights seem unsatisfying. The penalty for losing a fight is actually not really a penalty – you get a small stat boost due to your character getting angry from losing, which can help you win if you decide to try again. Becoming too angry will make your character pass out from exhaustion, though, so you can’t just keep doing that.

Overall, there are no real highlights in the game’s combat system. There are no truly imposing boss fights, and very few enemies for whom you’ll need to vary your strategy. They tried their best to make sure that combat was never the roadblock to your progress, which is an interesting choice – in most RPGs, you can get stuck behind a boss and need to grind for bit, but that never happens in West of Loathing. It works here because combat is not the main focus of the game, but it does feel very barebones.

It doesn’t matter too much, though, because combat can usually be skipped altogether – it’s possible to beat the game without entering a single fight, because there are always multiple solutions to every obstacle. Sometimes having the right item or just having high enough stats can allow you to skip past certain enemies altogether. It’s an interesting way of doing things, but there are a couple of occasions where it felt a bit cheap to be able to insta-win what looks like big encounter.

The replay value of West of Loathing is good. The game can be beaten in 5-10 hours, depending on how much you explore, but you will definitely miss a lot of things during your first playthrough just due to the sheer number of secrets packed into the game. There are some underlying puzzles that may take a few playthroughs to understand, and there are also some mutually exclusive choices to make throughout the game, meaning that each playthrough can be a little different from the last.

And that’s it. I heartily recommend West of Loathing to everybody who is willing to sit down and wander through absurd scenarios for a few hours while reading funny jokes. It’s seriously worth your time, even if it doesn’t look it on the surface.