We Are Not Alone REVIEW — Not Quite Out Of This World 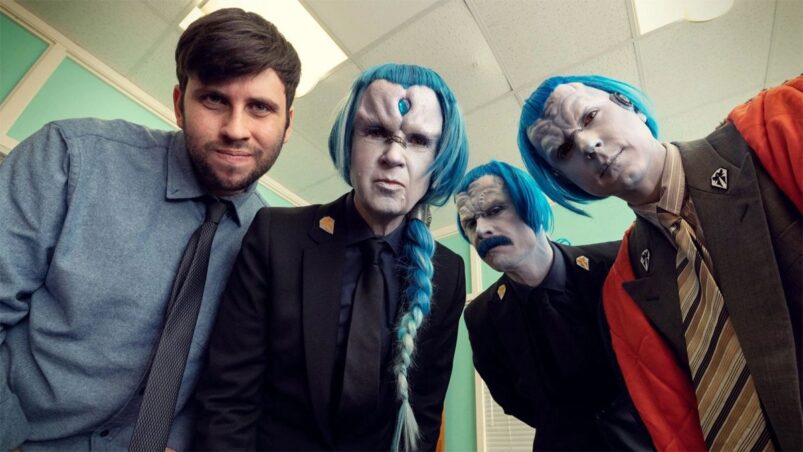 Countless sitcoms have used the idea of an alien invasion of Earth as fruitful comedy fodder. My Parents Are Aliens, Mork And Mindy, Solar Opposites, 3rd Rock From The Sun, all shows that have built their comic foundations on the plight of their respective alien colonisers attempting to understand the strange quirks and esoteric peculiarities of their new terrestrial cohabitees. The consistent gag across these similarly intergalactic efforts is that the aliens’ detached responses to their peculiar new home are in fact highly revelatory of mankind’s own flaws and failings. It is almost always the strangeness of humanity that is held up to the satirical spotlight far more than the eccentricities of any fictional alien species.

It’s the same premise used by We Are Not Alone, a feature-length comedy special from Laurence Rickard and Ben Willibond, two of the principal writers and creative forces from the BBC’s hugely popular spectral sitcom Ghosts. Eccentric historical ghouls have been replaced by an extra-terrestrial invasion of intergalactic refugees who land in the unassuming Lancashire town of Clitheroe and set up their officious, somewhat incompetent dominion over its inhabitants. Chief among these unsuspecting residents is Stewart, a generic loser archetype appointed as the alien’s new liaison and public relations manager caught between his loyalty to humanity’s resistance and his desire to keep some sort of fragile inter-species peace intact.

It’s another typical ploy, especially for more high-concept British comedies, to have the incursion of a large exterior force acting as the key motivator for our central schlub of a protagonist to finally get his act together. In the same way that Shaun of the Dead uses hordes of zombies to motivate Simon Pegg’s titular hero to finally shake off his malaise of suburban apathy, it is the invasion of aliens that supposedly kicks Stewart’s own character arc into action.

Note the word supposedly. Pegg’s iconic electronics salesman pretty sharply gets his head out of his backside in a vain attempt to formulate a plan (or multiple plans) to extricate himself and his friends from their apocalyptic predicament. Comparing a Dave production to arguably the most beloved British comedy of the century may seem unfair, but the lessons We Are Not Alone could learn from Shaun of the Dead clearly highlight the show’s defects. Whereas Shaun is a hopeless but good-hearted bungler with a glint in his eye and a bat in his hand, Stewart is a damp flannel in human form, moping and mooching and frequently reiterating his desire to simply not be involved. It isn’t long before we, the audience, start to echo his sentiments.

Not that there’s a staggering amount to be involved in. Rather understandably for a presentation airing on digital repeat-merchants Dave, there simply isn’t the budget to have aliens and resistance members duking it out with nuclear weapons and energy pulse laser cannons. It’s an understandable necessity that sometimes lends We Are Not Alone a healthy, parochial sort of charm, but when you realise that the central administrative building seems to be populated by the same six staff members and three rotating alien security guards, the threadbare seams do begin to show.

This rather limited budget inherently hampers the narrative, the story often dragging its feet and focusing in its first act on a slow-moving string of vignettes and fish-out-of-water gags before the central tension of Stewart’s predicament really kicks in. It’s a shame that Stewart is such a bland, featureless figure, too, considering that few other characters in We Are Not Alone demonstrate much agency, motivation or development of their own to speak of. Things essentially boil down to a basic dichotomy of anti-alien vs. alien, with Stewart marooned in the middle.

WANA is also somewhat hampered by its rather inconsistent tone. Not quite an adult satire on our own intra-species political divisions or the ongoing refugee crisis (absolutely crying out for further exploration) and not quite a knockabout farce either, the special is always precariously hovering between two stools, not quite committing to any one aspect that would really give it some bite.

For instance, there’s a relatively splattery death at the story’s outset that hints at a gory marker being set down, only to be replaced by rather more innocuous fare as things progress. You’ve got the aforementioned gags about human peculiarities, such as tussles over nuclear disarmament and the usual ponderings as to why we all drink bovine lactate in our tea abound to plug the gap, but there’s never anything truly substantial to get your teeth into.

The fundamental question to be asked of Dave’s feature-length comedy special, then, is whether it’s actually funny, a test We Are Not Alone strains, sometimes admirably, to pass. Never a complete comic black hole, there are chucklesome moments scattered across what is a strikingly malnourished narrative, most of which come courtesy of Joe Thomas’ parka-wearing alien simpleton Greggs, keenly exploring his new residence in the same way that a Labrador puppy cheerfully investigates a new kitchen by putting everything in sight in his mouth regardless of edibility or function. Thomas’ performance is one of several game standouts, with Mike Wozniak’s iron-fisted second-in-command Gordan another fully committed highlight. The script may not be worthy of its performers, but the likes of Thomas, Wozniak and Vicki Pepperdine’s amenable ruler Trater do their best with the material at hand.

In truth, the cast might in fact be WANA’s true saving grace. Yes, there are instances in which galactic talents like Catastrophe’s Rob Delaney or the hugely versatile Ellie White (see The Windsors, Stath Lets Flats, The Other One) are left with little more than infuriating short cameos, but mostly the performers feel so genuinely committed they push WANA through the barrier of mediocrity into something resembling a worthwhile endeavour. The script may not fizz and spark as the talents involved behind the camera might have promised, but there’s no lack of gusto from those performing in front of it.

That, after all, is We Are Not Alone’s main strength: a large roster of gifted comedy performers giving their all for an outlandish premise brought to life with the barest of means. A finer script would have provided more much-needed laughs along the way, but there’s still a quirky, easygoing charm to proceedings, an inoffensive and innocuous watchability that defies vitriol and repels genuine ire.

You’ll doubtless have already heard the usual alien gags, like not knowing what a hoover does or thinking that an electric egg whisk represents the baffling pinnacle of human technology, so don’t go into WANA expecting boundless originality, but an affection for any one of the show’s core players is enough to keep a degree of gentle investment. We Are Not Alone is hardly a stellar excursion, but it’s not a complete crash landing either. 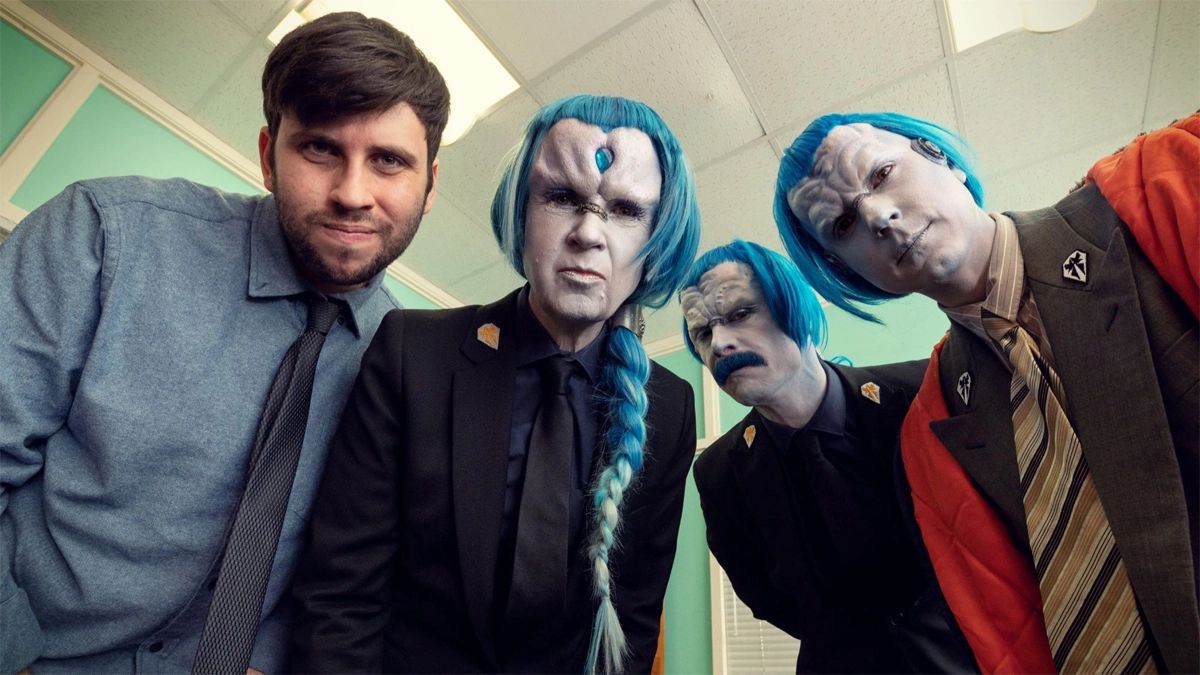 Verdict
Never quite able to escape the surly bonds of earth and really reach for the stars, We Are Not Alone sees a strong, committed cast hampered by a frustratingly underwhelming script.
5.5
Cultured Vultures is a pop culture website established in 2013 covering all things gaming, movies, and more. We eat your words.
All The News On The Biggest Games