Where To Watch Peep Show 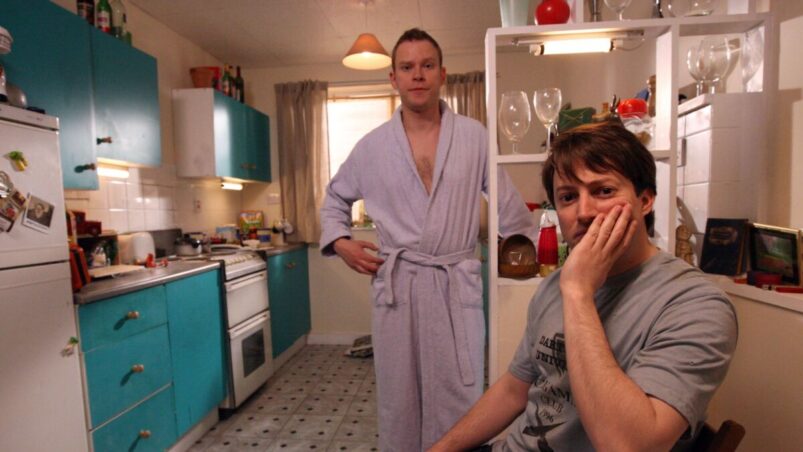 David Mitchell and Robert Webb are an excellent comedy double act in their own right, but will always live in the shadow of their central roles in the mighty Peep Show – two helpless neurotics, one an uptight office drone, one a slackery failed musician, who shared a flat in South London and cringed their way through life. Here’s where to watch Peep Show in the UK and US.

“I suppose doing things you hate is just the price you pay to avoid loneliness.”

Peep Show has nine seasons. This took us all the way from Mark and Jeremy’s aimless late twenties, through loves and losses and the credit crunch, right up into their forties – which Mark celebrated with a banner bearing the backhanded legend ‘Jeremy, you are forty years old’. But watching the pair age before our eyes was perhaps the least of the painfully intimate windows into their lives.

Peep Show used an unusual point-of-view filming style, with every shot within a rounding error being the characters’-eye-view. It could so easily have been a gimmick. Instead, by letting us share in their perspectives and their inner thoughts, it elevated the whole affair into comedy gold. Everything they got up to, whether it was Mark stalking his office crush or Jeremy pretending to have a terminal illness, we were there with them, sharing in the (usually ill-thought-out) thought processes that had brought them to this state.

Even without sharing in their inner monologue, it would have been excellent cringe comedy – but that added layer made it all so uncomfortably real. Most people could see something of themselves in either Mark or Jeremy, and, unfortunately, very often both of them.

Watch Peep Show In The UK

Peep Show is available to stream in the UK for free on All4.

You can also buy physical copies on DVD from Amazon. There’s no Blu-ray version at this time.

Watch Peep Show In The US

Peep Show is available to stream in the US on Amazon Prime and Hulu.

You can also buy physical copies on DVD from, again, Amazon.