Aethyr look at these tips. 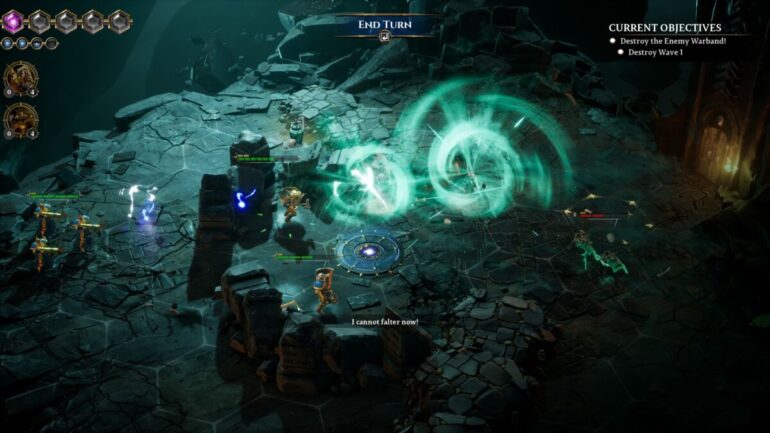 Warhammer Age of Sigmar: Storm Ground is a small-scale and intense tactics game where players compose warbands, earn rewards, and do battle against the nightmarish and the heroic. Players will have the opportunity to command one of three varied factions in the roguelike campaign and liberate, conquer, or corrupt their way to glory. It can be a daunting task figuring out the best path forward, so here is our list of Storm Ground strategies, tactics, and tips to get players started. Though the dynamics of the campaign are different to the competitive multiplayer modes, plenty of the following Storm Ground tips can be adapted for multiplayer.

As players recover chests and complete missions, they’ll receive an ever expanding collection of units, weapons, equipment, and skills. Not all loot is equally good and, in fact, some of it can be even worse than the starting base wargear. Not to worry, however: unnecessary and unused wargear can be sacrificed as tribute for an experience boost to a unit, which will, in turn, improve its combat capabilities, with rarer and more valuable items giving an increased amount of XP.

Elevated terrain can be a powerful asset to a warband if used properly. The main benefits of higher ground are that it increases the range of ranged units by one hex and that it reduces movement by one when going up the slope. While the distance buff to ranged units is self-explanatory, occupying elevated hexes can prevent enemies from attacking friendly units if they don’t have the requisite points available, reducing enemy action options while opening new tactical opportunities for allies. Remember the words, “I have the high ground!” and you will prevail.

Equip Heroes with the Best Gear

Hero units are the linchpin of any warband as they are some of the most durable and versatile units and their loss will lead to a guaranteed defeat. Since heroes are so important to victory and tactical success, it’s highly recommended to reserve the best gear for heroes, especially if players have a specific tactical role in mind. Non-hero units are relatively fickle in comparison and can be easily defeated and replaced, meaning any equipped powerful items will have a limited impact on the field.

As mentioned previously, Storm Ground’s campaign is structured as a forgiving roguelike, where players are almost expected to succumb to defeat, but they do not lose their rewards. Not only is there a story reason for many of the factions’ immortality and subsequent return to the fray, it’s also an integral component of the learning process. The roguelike structure lets players reflect on past failures, take stock of their refreshed arsenal, and compose a new approach which will inevitably increase the chance of victory.

Active abilities are a dime a dozen in Storm Ground with many units having knockback or terrain manipulation options. Being cognizant of how units are deployed and maneuvering to create optimal situations, such as multi knockback damage, can shift the flow of battle very quickly in a player’s favor. Positioning also relates to terrain manipulation as for either the Nighthaunt pyres or the Maggotkin corruption placement are crucial to their factions’ playstyle.

During missions, there will be a smattering of treasure chests and scrolls for players to interact with. They may not have an immediate tactical effect, but they are vital to long-term campaign success as the chests in particular hold rewards for new wargear and unit unlocks. The scrolls usually provide lore and are less vital to practical success, but nonetheless are useful pickups to understand the setting and characters better.

Movement points in Storm Ground can also be considered action points for movement and attack. For example, a unit with a movement rating of two can stand and attack, foregoing movement altogether, move one hex, then attack, or move two full hexes, but can’t attack (artillery and other ranged units follow slightly different rules). In essence, attacking counts as if the unit is moving into the hex and thus requires a movement point. However, most abilities usually don’t require a movement point and can serve as a useful substitute for the standard attack action. Remembering and understanding this dynamic can help optimize unit movement and activity.

Since Storm Ground is a small-scale tactics game, it’s vital for every unit to have an assigned role, which will in turn guide the tactical decisions on abilities and positioning. Included in unit role configuration is the sequence of deployment of units, as players will have limited resources to bring in new units every turn. Another vital component to the battle plan (which will inevitably help with unit roles and deployment) is the victory condition of the player’s warband, or in other words the method through which the player will achieve their objective. Having a set battle plan (with backup plans just in case) will give a clear idea of how to position correctly and defeat the opponent.

Most abilities in Storm Ground will have an Aethyr cost (mana) associated with it to activate. Some of these abilities can be game deciding and expensive. On some battlefields, an Aethyr wellspring can spawn which will drastically increase the resource generation for the faction that holds it with a unit. Increased Aethyr generation can mean overwhelming the opponent with a decisive and unexpected blow and keeping your own units safe.

Though we mentioned previously that defeat is a necessary component to success in Storm Ground, it’s still good practice for players to do their utmost to keep their units alive. Players can revive defeated units using the incredibly scarce Miracle resource, but it’s best to avoid using this resource until the campaigns get really difficult. Not to mention, having as many live units as possible for any given mission means the player will have a greater number of options from which to compose their warband.

Warhammer Age of Sigmar: Storm Ground is available on PC, PS4, Xbox One, and Switch.

READ NEXT: The Best Warhammer Strategy Games You Should Check Out