Vampyr (PC) REVIEW – Sink Your Teeth Into This 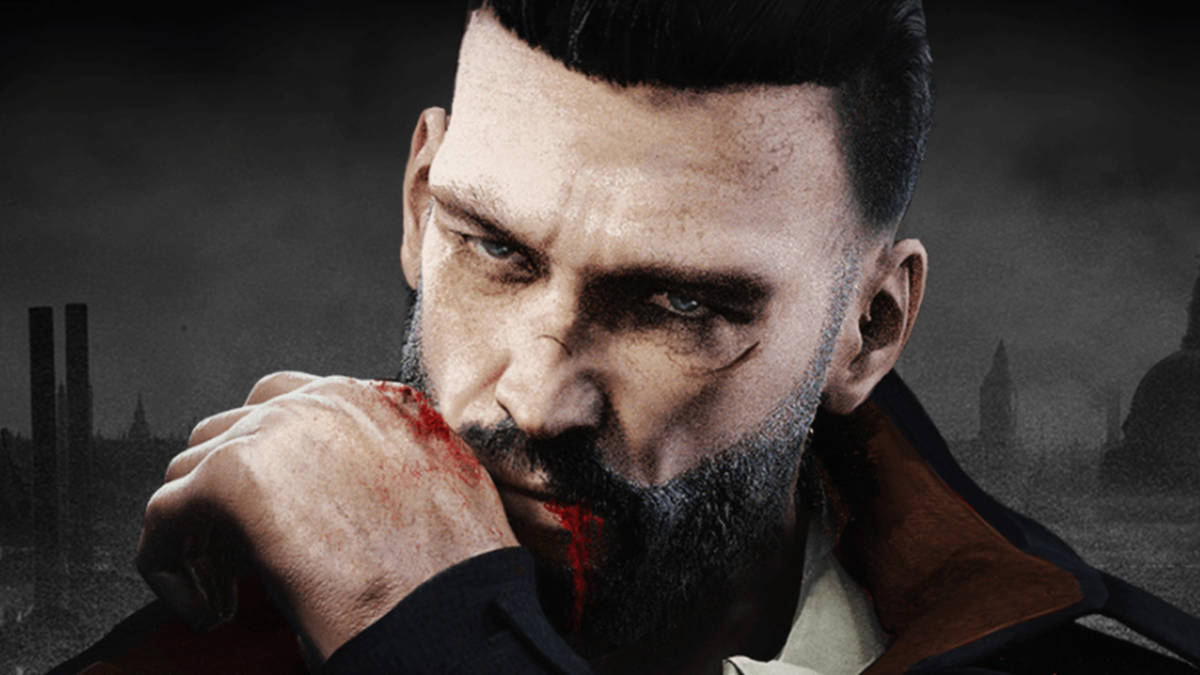 After Dontnod’s last game, Life is Strange, no one expected them to hit back with a vampire action-RPG, but they did, and it’s finally here. It’s a thrilling tale of vampirism in the wake of the first World War, and how humans and vampires react to justice and injustice.

The game kicks off after a short animated comic-style noir sequence with the death of your sister, Mary, and you fleeing for your life as people hunt you for being a vampire. As far as tutorials go, Vampyr has a fairly simple one by not being too in your face about it, but also still very much holds your hand for the first few minutes of the game. It also doesn’t sacrifice tension for the sake of “helping the player” in those first few minutes, seeing as you’re still on the run.

One of the many tools the game gives you to navigate the flu-stricken city of London are the so-called vampiric senses, which look a lot like a Sin City version of Batman’s detective vision, letting you see traces of blood and people’s intravenous systems in bright red, whereas interactive objects occasionally flash and the rest of the area is in greyscale. It’s not utilized as often as it could be — at the very end of the game it’s used in an interesting way that should have been used more often throughout the game, but it still serves its purpose quite well for a vampire stalking its prey. 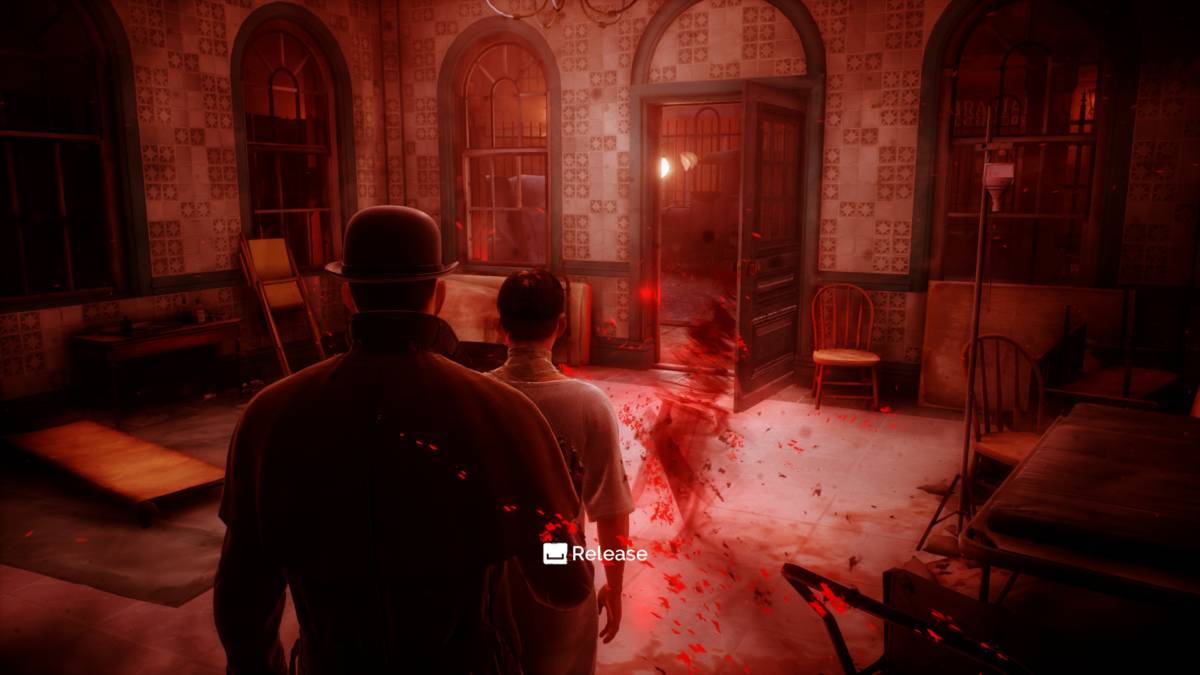 The city of London isn’t the most friendly one, and with everything been torn apart from every side, the people aren’t always as hospitable as you might like. However, there are still a bunch that don’t mind talking. In fact, each of the four districts, be it Pembroke Hospital, Whitechapel, The Docks or West-End, has a pillar, a person important for the wellbeing of the entire district, and a varied assortment of other folks to get to know. Whether or not you kill them is a different question. There’s a chart of characters for each district available next to the map and inventory, and every single character on those charts is killable. In fact, as the game so kindly reminds you every time you die, the game gets easier the more citizens you kill. However, it’s not that simple.

On the chart, you’ll also see three other things when you hover over a specific person that you’ve met before: their health, the number of hints you’ve found, and the XP they’ll give you when you kill them. The XP they give you is dependant on how many hints you’ve found and how healthy they are, so killing everyone from the get-go probably isn’t such a good idea. In fact, the more people you kill, the fewer side quests you can complete and the fewer merchants you have on the streets.

Side quests help you get money, ingredients for medicine, weapons and parts for weapons so you can upgrade them, which you’ll definitely need. Despite being an RPG, the game doesn’t adhere to the typical “gain XP and level up” routine that you might be used to. The game only lets you level up when you’re at one of your hideouts, several of which are found in every district, and you have to go to a bed. You spend the XP on abilities and health/stamina/blood upgrades, and the more you purchase with XP, the more you level up. At hideouts, you can also upgrade your weapons or make medicine/serums, provided you have the materials (and for medicine, the recipe). This means that there will be times when you need to choose between levelling up enough to survive the scaled enemies and saving a district. 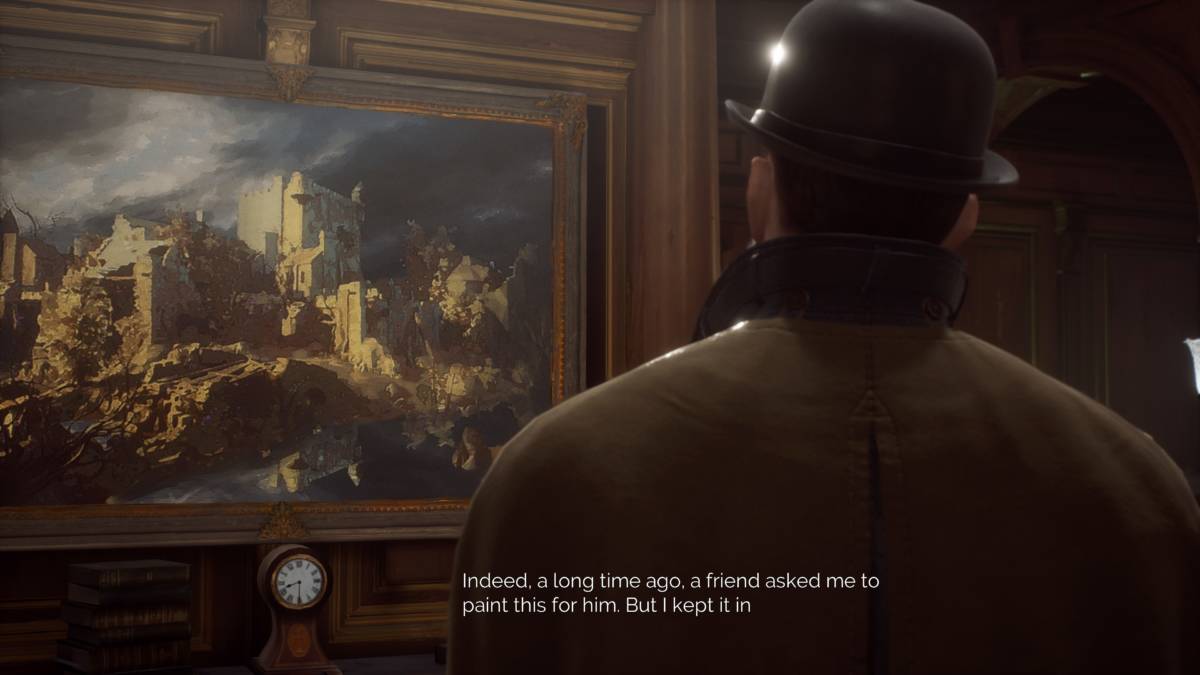 Medicine can be used on sick people in conversations, whereas serums are used on yourself in battle. You’ll need to use the medicine if you don’t want everyone to die, as going to bed means ending the night and sleeping through the day (to avoid sunlight). All sorts of crazy things can happen in the daytime, depending on what you did the previous night, and the sicker many people are, the worse the whole district is. If the district turns hostile, it’s not unlikely that everyone in the district dies. That means that all the sidequests you had with them are gone, and all the XP you hadn’t harvested up to that point is lost forever.

The people of London are interwoven in all sorts of ways, and the more you talk to people, the more you find out about others, which makes for a highly interesting dialogue system which can have you preoccupied for ages, going back to a person every time you get a new hint for them, just to see what they have to say about it. It really breathes life into the game, and without this system, London would feel incredibly empty, even with all the enemies. More often than not, games let you talk with characters that feel two-dimensional, but the London in Vampyr is full of characters with strengths, weaknesses, and stories.

Unlike some of the more popular vampire media these days, Vampyr respects vampire lore while adding parts of its own, but it’s also not incredibly overblown about all of it. Although holy symbols can slow or even harm you and fire is extremely effective, the game doesn’t put a clock on nighttime, forcing you to rush to a hideout or die, and it doesn’t over-explain why those things affect you. It mentions them once, but for the rest of the game, it’s even regarded as common sense. The game also doesn’t exposition-dump you (most of the time) but drops lore bits in dialogue while talking to people on the street, meaning that if you don’t spend time getting to know people, you might not even see the whole picture. 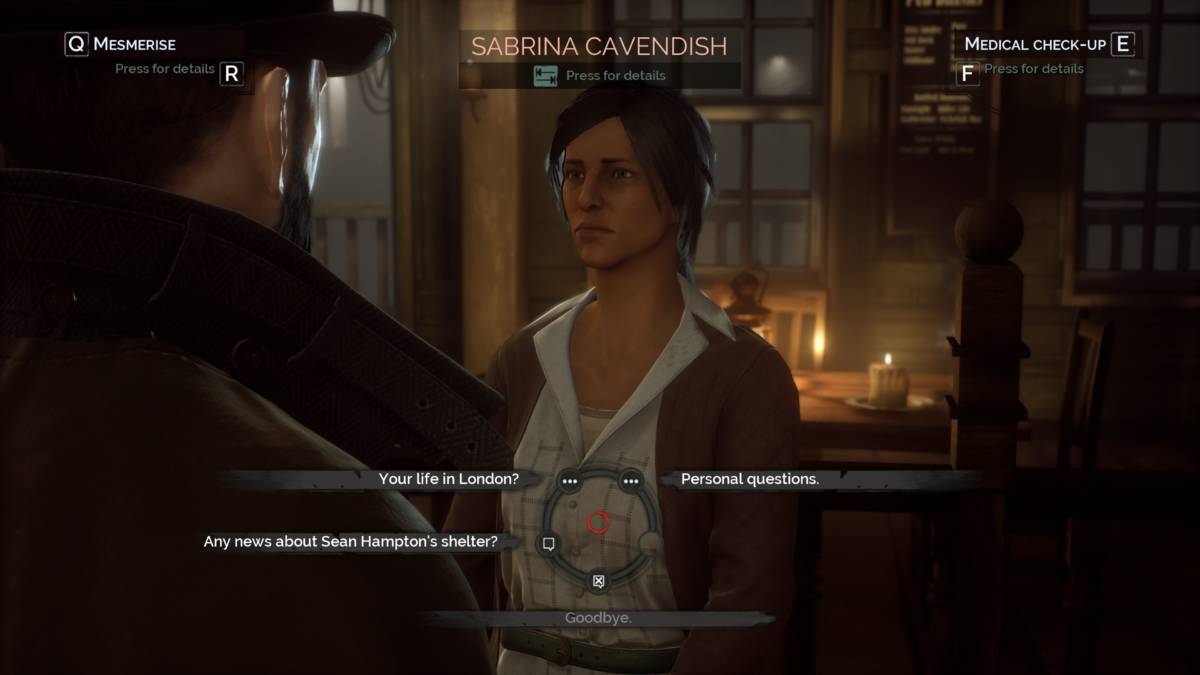 In fact, purely by the way that the different species of vampires stack up against each other, with some types being seen as lower types, and some being seen as high society, the game tackles topics that many other games wouldn’t even bother looking at. However, it also doesn’t scream “hey, look, these different vampires types are a metaphor for real racism!” because it actually has real racism in the game, too. It also thematizes sexism and classism in these ways, although the latter is probably the least important in the grand scheme of things for Vampyr. None of these are the focus of the game, but it’s good to see them being approached either way.

Vampyr starts with two types of enemies and around the halfway mark has four different types of enemies. Each of these types is completely different and dangerous in its own way. Skals are the lowest vampires there are, and are comparable with zombies, except for the fact that they can be extremely fast and some can even vomit a type of gas that harms you very effectively. Then there’s the Guard of Priwen, a group of religious fanatics hellbent on wiping the vampires out of the city. They tend to use fire, crosses and crossbows, meaning they can be deadly if you don’t expect it. If any of these two different groups meet in the city, they fight each other and don’t just stop fighting once you go by, although one enemy usually turns around to attack you before going back to the others. The other two groups are a bit of a spoiler and possibly depend on your choices.

The enemies you find in the streets do scale as the game goes on, but in quite a particular way. How you level up throughout the game plays absolutely no part in determining how much they scale, but instead, it only has to do with the chapters. Even there, however, the enemies don’t scale uniformly. In fact, the enemies only scale in the areas that you need to pass through to get where you need, but if you choose to go a different direction than the game expects you to — to check off some sidequests or to buy some more stuff — the enemies often won’t be as high a level as they are elsewhere. 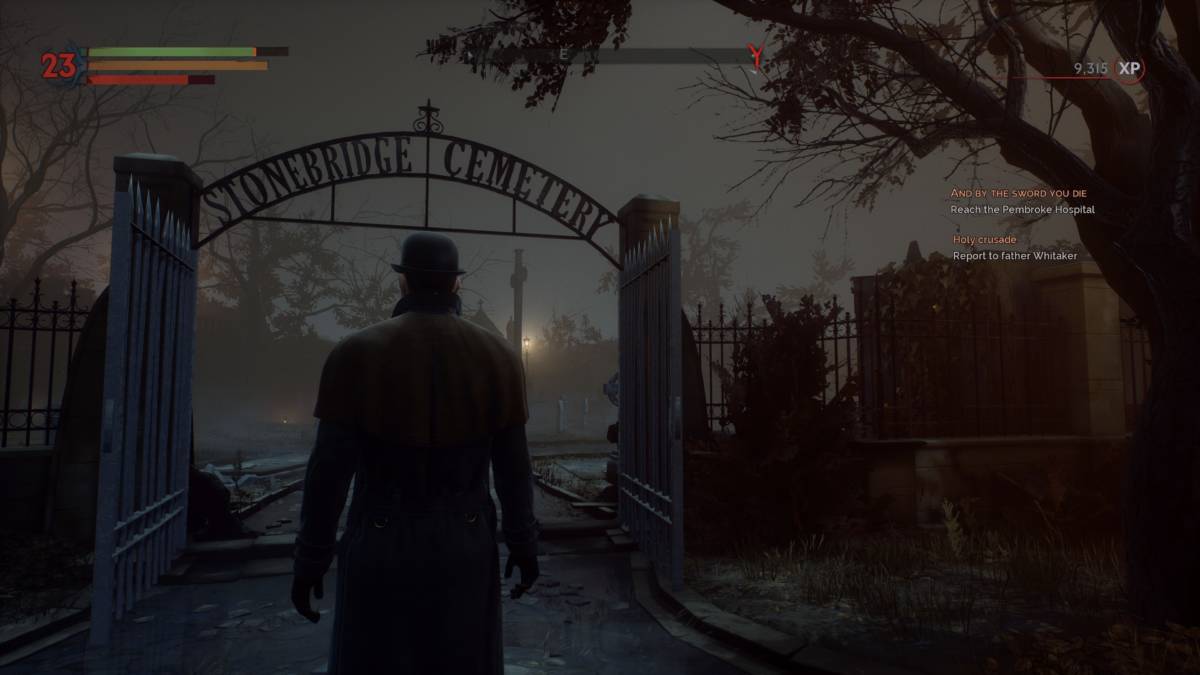 Every so often in dialogue, you’ll have two or three options that actually mean something. These are marked by the game’s signature Y in the middle of the dialogue circle. Although these choices have consequences, it’s often not clear what consequences these have. Sometimes it tells you that you failed a hint, but other times it can say nothing, meaning that there’s not always a “Dr Edgar Swansea will remember this” notification every time you say the wrong thing to a patient, for example.

Although the game’s music is absolutely top-notch, working in the background and intensifying the happenings in the foreground, and the voice acting is mostly pretty good, the animations of characters during dialogue usually leaves room for improvement. They often have very repetitive gestures and movements that don’t fit the tone of the dialogue. Dr Swansea, in particular, has gestures that look like the SNL High School Theatre Show sketch, although he’s clearly the worst case. Often it’s not conspicuous, but there are one or two characters where it definitely is, which is a shame.

As a whole, Vampyr is really good at guilt-tripping you. Throughout, it constantly tempts you to kill a citizen, even just one, to level up because the enemies scaled so brutally, or because you need more stamina to kill a really fast boss. However, the more you kill, the more it gives you bad news, for example, newspaper articles written by suspecting journalists. It also fuels guilt with the “last words” mechanic. It’s a very small addition to the game, but it makes a world of difference. Whenever you kill a citizen, their last thoughts when you killed them echo through your head, and a lot of them really hit hard. If you’re unlucky, you might even find their tombstone in a graveyard.

Vampyr knows and embraces the fact that it’s a vampire RPG, which lets the game go further than it otherwise could. It also doesn’t use the fact that the main character is a doctor solely as a backdrop for more sinister goings-on, which is a welcome change to so many games that don’t let a qualified professional do his job. From fairly varied combat to intriguing webs of characters, Vampyr is a hard-hitting game that rarely lets go.

Verdict
Filled with moral dilemmas and an unexpected strategic depth to its city system, Vampyr is a vampire RPG that isn't afraid to bite back. Although some characters are quite stiff in dialogue, it's still a great game overall with intense confrontations, fast-paced combat and a thrilling story. Microtransactions: none
8.5