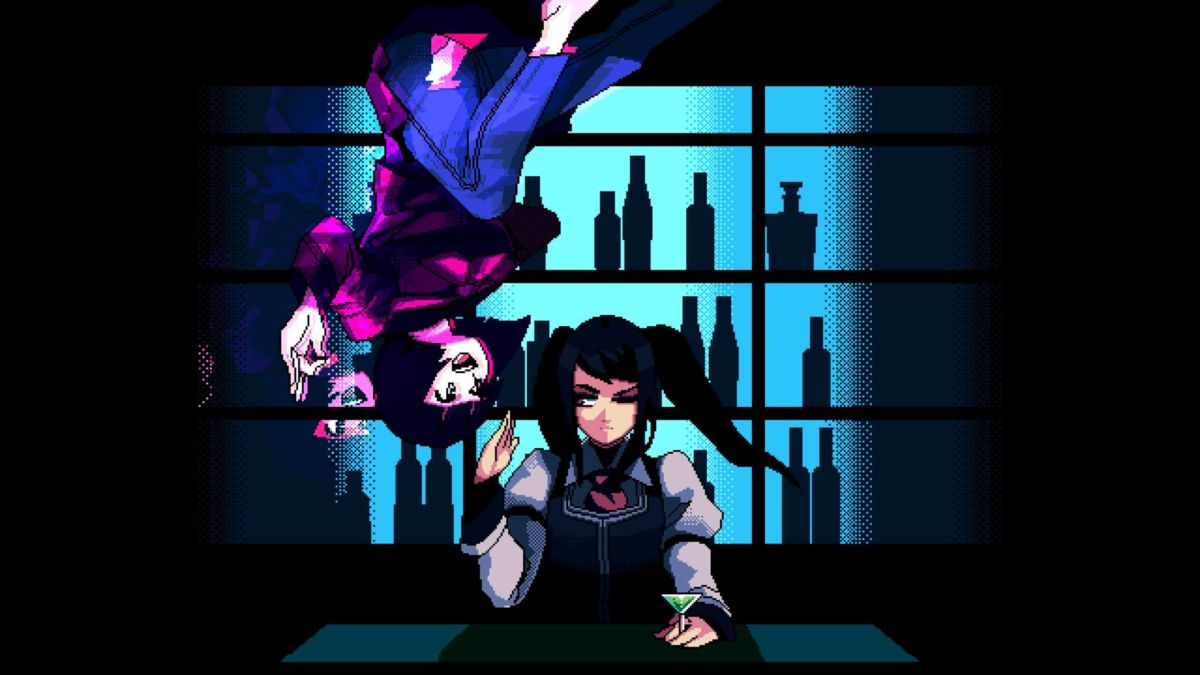 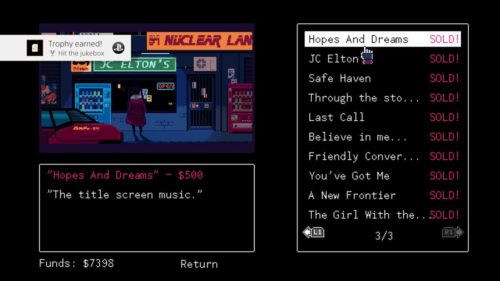 Sukeban Games’ VA-11 HALL-A is the kind of game you show to those who say that visual novels aren’t worthy of anyone’s time, or that their classification as “games” should be questioned. As someone who didn’t really have much of an opinion on the genre beforehand, VA-11 HALL-A left me wanting to check out more of its peers, though I have a hard time believing they will leave quite as big an impression.

VA-11 HALL-A — quite literally — tells you very early on that it’s a game where you’re supposed to sit back and soak it all up, maybe with an alcoholic drink of your own in-hand. I took the game up on its advice, switching booze for Heineken 0.0 and sinking into my couch for eight hours in total. What I discovered was a far-flung story featuring talking dogs, brains in jars, and weird cocktails that somehow also ended up being deeply human and relatable. 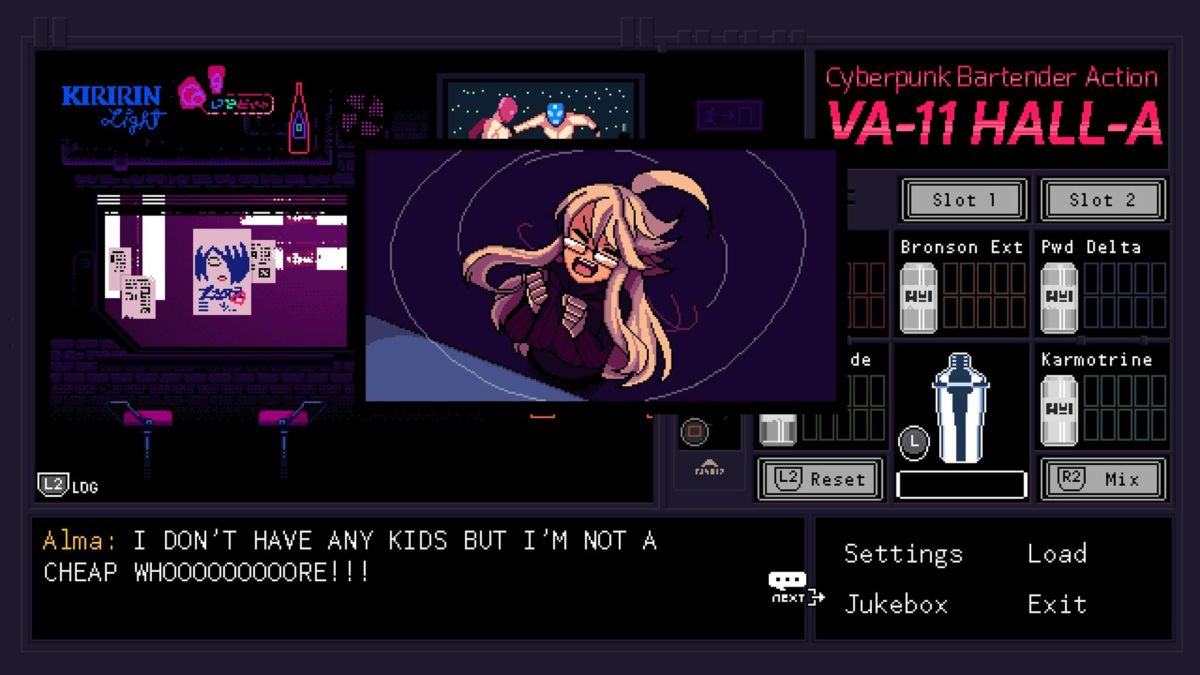 You play as Jill, a hardened but ultimately sympathetic bartender in the distant future who must serve some of Glitch City’s most “unique” characters at the Valhalla bar. As a cyberpunk tale, you can expect more than your garden variety Barney Gumbles to come looking for drinks. VA-11 HALL-A has one of the most interesting and diverse casts of any game, though it must be said that not all of them are as fascinating as each other, even if you do get the impression that different players will have different favourites.

Gameplay in VA-11 HALL-A is mostly passive and only asks you to select “next” to keep the conversation flowing. If the writing wasn’t as good as it is, this leisurely pace could be a problem, but luckily VA-11 HALL-A doesn’t struggle to make the player smile along (or even chuckle often if you’re like me and laugh at everything) or get really invested in the happiness of its characters, the game’s protagonist most of all. Jill is a hard-ass, but someone who cares deeply for her patrons and colleagues, who she almost all considers as her friends. There is a deep sadness, a sense of guilt in her that the game chips away at while winding up for a total gut-punch, which I won’t spoil here. 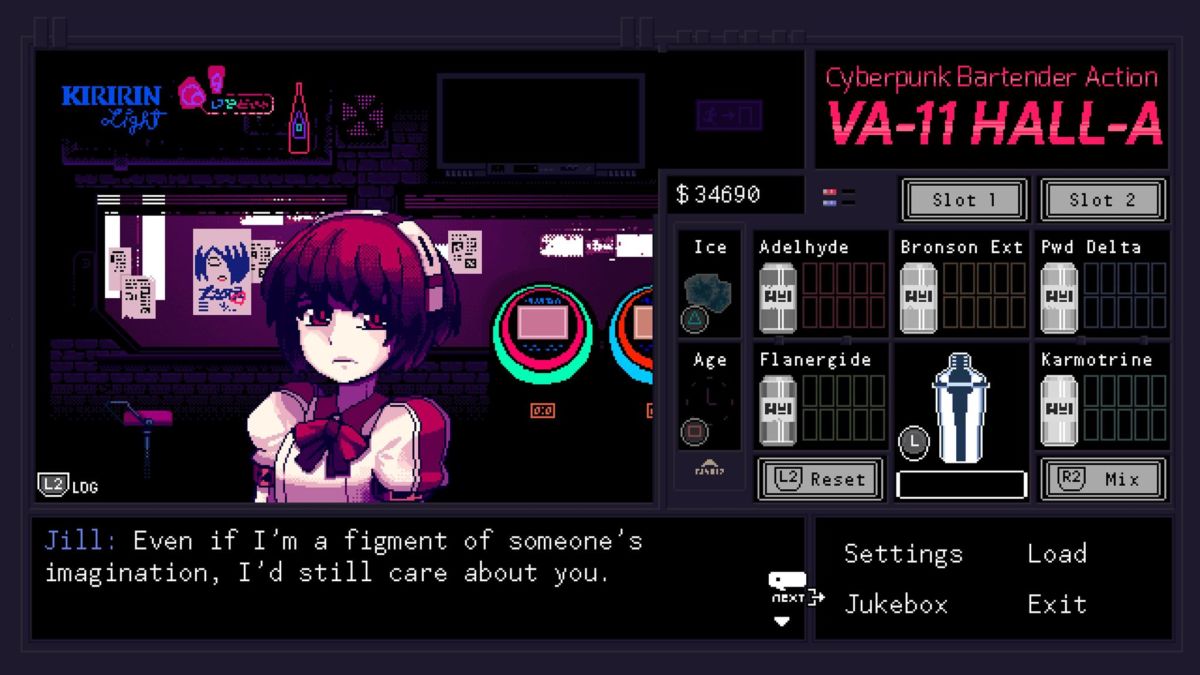 You wouldn’t be a bartender unless you occasionally poured some drinks, and that’s where the variety arrives in VA-11 HALL-A. Luckily for those not wanting to get out of first gear, there are no rhythm mini-games to contend with. A customer will ask you for a particular tipple, you refer to the guidebook, and then you make the drink based on five ingredients. Some orders can be “big” versions of the regular drinks, which just entails doubling up on everything. You use the left stick to select different ingredients, which does feel slightly too fine as it will sometimes flit between them with the lightest of touches on the left stick, making you reset after you select the wrong ingredient. While serving the wrong drinks isn’t ideal and can lock you out of certain endings, it’s impossible to fail in VA-11 HALL-A — even the worst of the game’s many endings isn’t that bad.

VA-11 HALL-A is a largely linear game in that it plays out mostly the same in different playthroughs with the only real changes coming in how well or otherwise your relationships bloom with others. Unlike basically every other game ever made, however, you don’t foster deeper connections based on dialogue choices, rather on how well you follow their drink orders. While I initially would have preferred a mixture of the conventional and unconventional to make it more “my” Jill’s story with me choosing who she did and didn’t gel with a bit more traditionally, her overall arc was satisfying and captivating enough that I was won over before long. 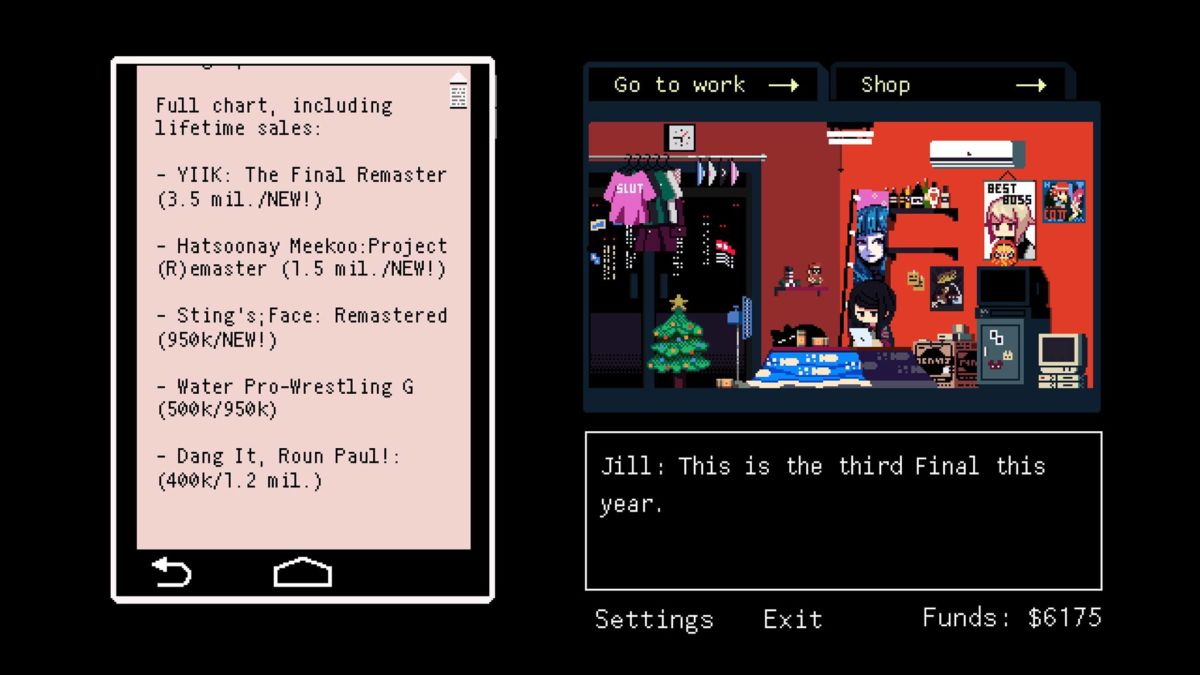 The length of a regular shift in VA-11 HALL-A will probably be determined by your reading speed, but the game is wise to break days up by sending Jill on breaks. You can also select your own soundtrack from the game’s handsome selection of songs, and while I deferred to my Spotify playlists for that extra bit of comfort for most of my time with VA-11 HALL-A, the music definitely features a bop or two. Anyone who loves retro synth will find something to love on the game’s jukebox, and even if you don’t straight away, you can always go buy some more from the shop, or even unlock a few by making the right drinks.

Once her shift is over, Jill returns home, at which point you are let loose a little more. Whether you’re catching up on the news or customising her room in a gaudy leopard style, there’s a nice bit of variety to be enjoyed here. You can even venture to the shop to buy some decorations (read: junk) for her room, but the looming spectre of bills are hard to ignore. As it’s set in the future, renting in the city is somehow even more exploitative than it is now, so you have to save your money, which you get more of by doing a better job. However, Jill can become distracted and forget drink orders if you don’t buy her something she wants, so there’s a fine line to walk. 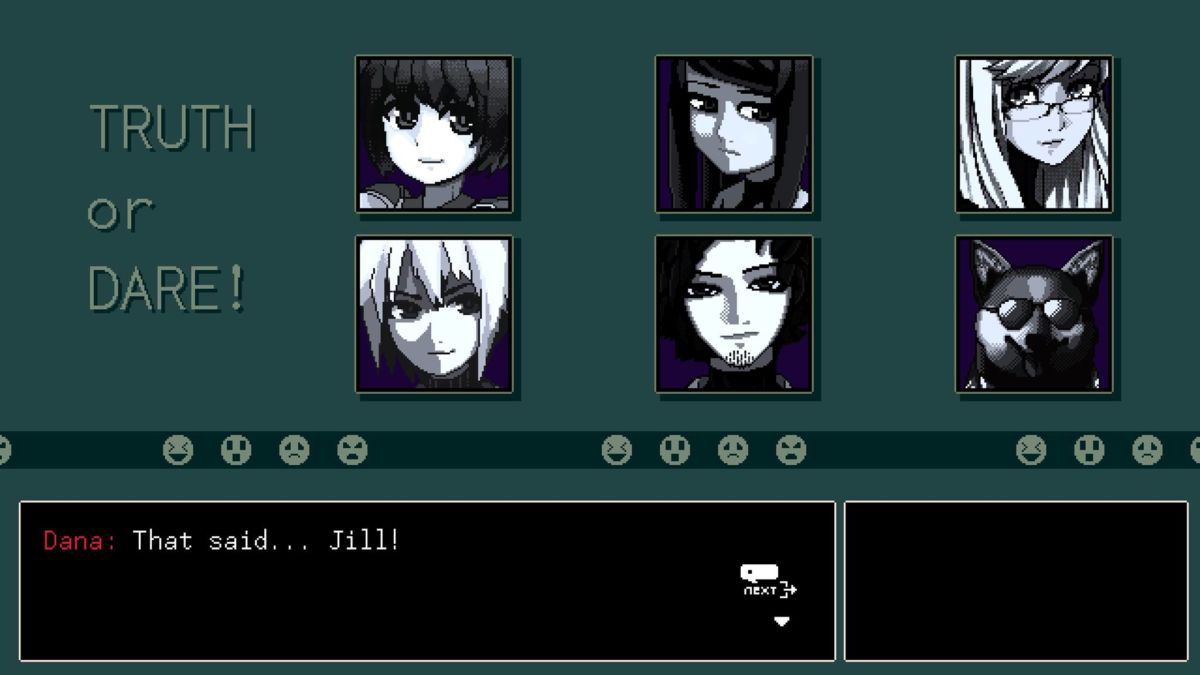 VA-11 HALL-A is not just shift after shift of pouring drinks, however. It does a great job of taking a break from routine by having Jill enjoy a few beers with her boss (who might be the game’s best character) or playing truth or dare with all her closest friends, among other cutaway moments. This all combines to make VA-11 HALL-A feel like a game that creeps up on in you in terms of how engrossed you become in it. I was slightly cold on it to begin with, but before I knew it I was beaming along like a dumb idiot after each Dorothy or Sei appearance, not to mention the banter between the three Valhalla workers.

While it’s not the most immediate of games and probably won’t appeal to those who want constant stimulation and action, VA-11 HALL-A has a tonne of heart that cannot be denied and a lot more depth than you may initially realise, all backed by razor-sharp writing (which also isn’t afraid of pushing taboos) and lovely visuals. Pour yourself a cold one and allow yourself to be surprised by this gem.

Verdict
Even for those who don't have a lot of love for visual novels, VA-11 HALL-A's varied gameplay, charming characters, and superior writing make it worth seeking out.
8