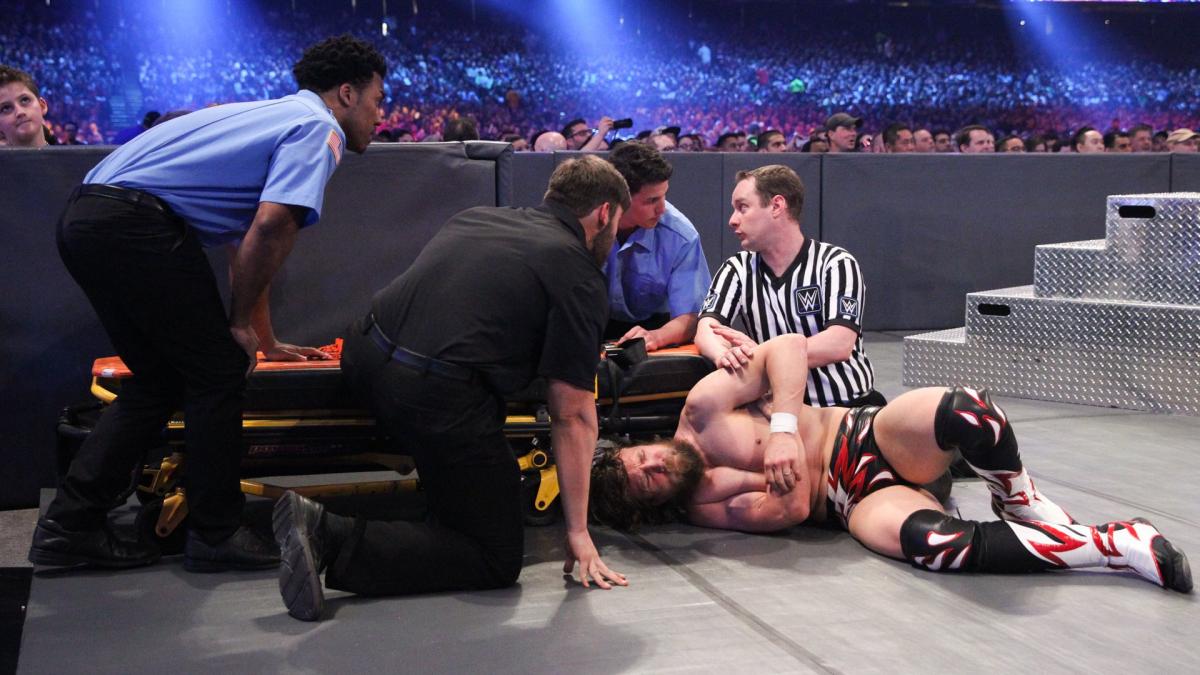 Wrestling as a craft is built on extremes. Matches and storylines can go too far one way or do too little another. The same can be said for everyone’s favourite patented finishing manoeuvres.

There are moves in the business that are tiresome or preposterous, either in effect or execution, looking in their aftermath as if they do no damage. Then there are those manoeuvres that are common, used get a pop from the fans, but pose risks to the performers and could potentially shorten careers.

Protecting an opponent should be a wrestler’s number-one concern. If they can’t prioritize that, then their spot shouldn’t be worked into the match. These next few moves are either wisely not worked into a match anymore or could stand retirement.

We thought this one went out with the Benoit tragedy and the concussion scandal, but somebody forgot to remind the front office as of late. The diving headbutt rears its ugly self (head and butt) on occasion, most recently as a finisher for the equally notorious and mercurial Lars Sullivan, then disappears just as quickly.

You’d think they would have learned by now. Wrestling moved on from chair shots to the cranium and managed to thrive just as much. Diving headbutts would be no big loss.

Admittedly, we all like it, but how many ways do you need to drive someone’s face into the mat? Devastating as it is, the DDT was original when it was first invented, by accident, back in the 1980s. Not so much anymore since it became a redundant transitional move and a finisher for every rookie learning how to work. That and it is dangerous when done wrong.

Leave the DDT to its pioneers – Jake Roberts and Raven.

How many more necks have to break before this move is declared too unsafe? Buckle bombs are forbidden after Sting and Finn Balor were badly hurt, but the powerbomb itself could be the real issue. Sports scientists found out the force of it reaches the equivalent of a car accident. This move has ended careers and almost cost John Cena his.

It might be best to reserve powerbombs for the occasional table spot.

As long as people have been doing it, the suicide dive has been as questionable as the mindset of its various users. Most of the time it’s performed without a hitch, but it’s called high risk for a reason. Your chance of a dive going wrong increases every time you execute it. And fans are continually treated to a handful in a single match. I understand Daniel Bryan loves flying like Superman, but his opponent won’t catch him every time.  One concussion is enough.

In the case of moves where everything could go wrong, a competitor flies through the air from the top rope and plants both feet into his opponent’s chest. Finn Balor hasn’t hurt anyone so far with his Coup-de-Grace, but that doesn’t make him more than an exception. Imagine if someone wasn’t prepared to take this move or to properly execute it. Plant a foot in the wrong place, landing on a guy’s head or throat, you could end a career.

When it was a rare spot done by Japanese or X Division wrestlers, it was fine. Now everyone stuck on the main-roster grind has the potential of this high-risk move going awry and having their ribs crushed.

Remember when you were a kid and your peers goaded you into going higher on the swing, until you went so high they dared you to jump and hurt yourself? Here is one final case of landing wrong spelling certain doom.

Botching a superplex on Smackdown put a halt to Dallas Page’s career for a few years. A super back suplex was the move that broke Chris Benoit’s neck. Bret Hart stressed the importance of protecting his late brother Owen when they executed the move in their matches together. It’s clearly dangerous; is it worth saving? Is it even necessary?

Seth Rollins does a decent job of floating through and no selling superplexes on a weekly basis. The architect, however, only makes people underestimate the risk involved.