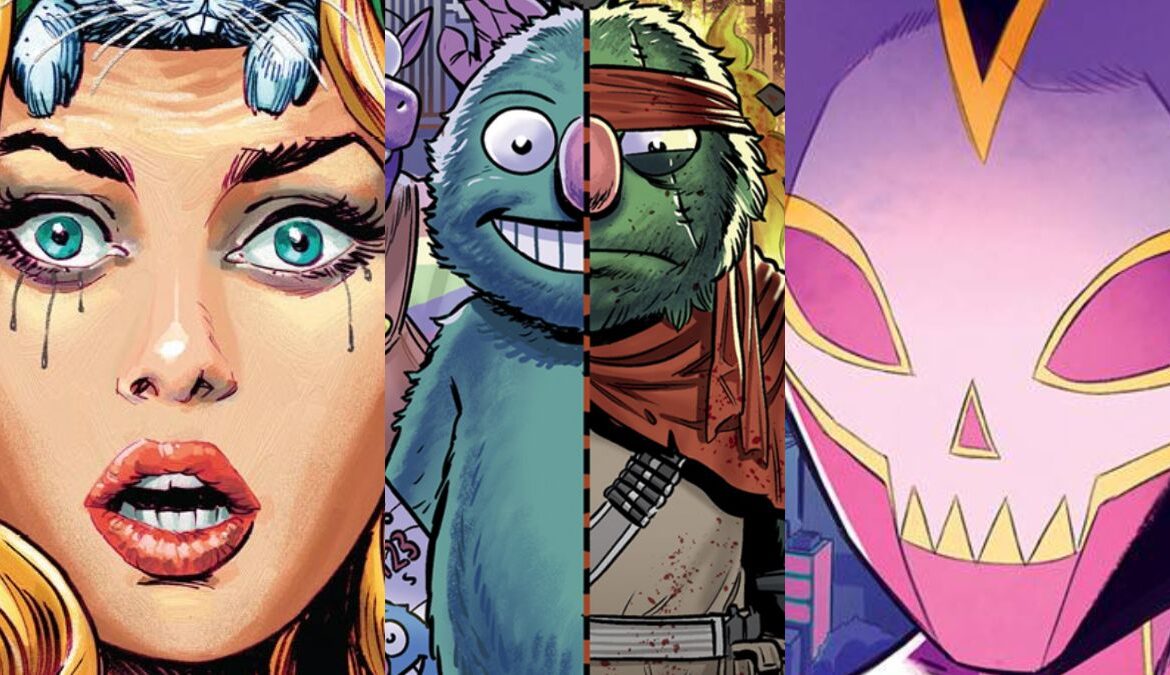 Comic releases are heating up as this hot year continues. Comics put on hiatus or series that faced publishing delays are finally seeing publication and future release dates. It’s a big relief for creators to see their work in print after so long, and their dreams coming to fruition.

While we await comic issues we’ve been patiently looking forward to, tons of comics have surely flown under our radar. Indie comic publishers AHOY Comics and BOOM! Studios both released conclusive, explosive fifth issues for their G.I.L.T. and Alice Ever After series, respectively, in August. Former Kickstarter success story comic True KVLT got a wide print release from IDW Comics this month. Check out these 10 underrated August comics you shouldn’t have missed.

If you grew up reading Archie Comics, you might remember the mischievous blond Li’l Jinx from the Little Archie comic line. After reappearing in the recent Archie Horror comics, Jinx returns to Riverdale as a roguish teenager in Jinx’s Grim Fairy Tales.

Somehow, despite her childhood antics, Jinx Holliday has established herself as the main babysitter in Riverdale. Jinx has a method to positively change kids’ behaviours: She tells them stories from an odd book of fairy tales. There’s sorcery and sadness in these grim tales with a lesson on morality the kids may or may not completely understand.

As a fan of Archie Comics and their horror line, Jinx’s Grim Fairy Tales is a delightful ode to the character. Each spooky story incorporates old and new Riverdale characters as the writers give Jinx a distinct narrative voice.

Burger Lord veteran Marty Tarantella finds himself in a lingering ennui after 15 years of burger flipping. One day, he plots how to commit the perfect crime: Rob all the neighboring stores on his lunch break and change his life. However, Marty makes a crucial error and finds himself in trouble with an angry cult.

True KVLT feels both modern and nostalgic with its themes of depressed employees, Satanic panic, and heist excitement. Neon colors pop against the saturated interiors, manifesting a pitch-perfect atmosphere. The hilarious story stands out as one of the best comics published in August 2022.

Alice Ever After has proven itself to entice more and more with each passing issue. A dark take on the iconic Alice in Wonderland story, this comic series shows Alice addicted to drugs and taken into an insane asylum. It’s about finding the bliss of Wonderland again when you’re all grown up without any escape from painful reality.

After the events in the penultimate issue, Alice battles against her trauma, repressed memories, and the kleptomaniac Red Queen at Sacred Heart Sanitorium in Alice Ever After #5, which concludes the BOOM! Studios miniseries. Any fan of Alice adaptations should tumble down the rabbit hole and read this wondrous adventure comic series.

It’s hard to believe G.I.L.T. (Guild of Independent Lady Temporalists) has reached its final issue already. Comic readership frequently drops off after a few issues, unfortunately, which is a shame since G.I.L.T. releases from AHOY Comics have been such a highlight of each month. Now is the ideal time to revisit this series if you haven’t been keeping up on this satirical, elderly woman time travel adventure.

G.I.L.T. #5 concludes one of AHOY’s most daring and hilarious series thus far in the publisher’s history. Trista and Hildy have taken a long trip down memory lane after they accidentally traveled back in time to their first fateful encounter in 1973. Our heroes await trial in a dark basement, and everyone’s fate hangs in the balance in this climactic issue.

An underrated August comic release, do yourself a favour, read G.I.L.T., and ponder what would happen if you could change your past.

Alternate-history comics such as Watchmen offer readers a glimpse at how changes in the past could affect the future. 20th Century Men #1 from Deniz Camp, S. Morian, and Aditya Bidikar re-imagine international historical events from the 20th century in an ambitious apocalyptic tale.

The extra-length premiere issue from Image Comics traverses various decades from the last century. Soviet super-soldier Petar Fedorovich Platonov takes centre stage, fighting for justice in a war-torn world. In the United States, the scheming President, a different kind of super-soldier himself, formulates a plan to heighten America’s military supremacy above all other nations.

The comic wastes no time casting readers into the burning carnage and political warfare inside its pages. Through prosaic language, dynamic art styles, and innovative lettering, 20th Century Men #1 establishes a harsh, ambiguous atmosphere you’ll find yourself wanting more of by the end.

Fans of Radiant Black from Image Comics should consider themselves lucky to read another top-tier sci-fi/action comic in the Massive-Verse with The Dead Lucky #1.

In the technologically advanced city of San Francisco, Afghanistan veteran Bibiana Lopez-Yang wrestles with severe PTSD. However, the robot-monitored city run by tech consortium Morrow isn’t the only thing that changed since Bibiana returned. She gained the super-powered ability to control electrical currents during her service. Now, her service is needed again when a militant group threatens San Francisco.

This might be my favourite new comic in the Massive-Verse, besides the flagship title. It slows down the pace without sacrificing strikingly illustrated action sequences. The Dead Lucky challenges preconceptions about PTSD in a story about a woman with special abilities still fighting for meaning in her life.

Drawing from mythology and horror, the underrated August comic release The Vineyard should grow to the top of your pull list.

From AfterShock Comics, the miniseries’ debut issue follows the Vines family and their eponymous family-owned winery business. Blessed by the god of wine, Dionysus, The Vineyard winery has brought wealth to the dysfunctional Vines. But the god requires great sacrifices in his pact with patriarch Didache, and not everyone in the family agrees with their horrible obligation to Dionysus.

Go into reading this first issue without looking at any preview pages showcasing the haunting, purple-hued interiors. You will find yourself equal parts horrified and immersed in this macabre tale of terror.

Although there’s a share of comic readers out there burnt out on superhero stories, there’s also a large audience vying for unique takes on the genre in the vein of The Boys. The writing duo of Patton Oswalt and Jordan Blum, who highlighted C-list villains in their M.O.D.O.K. miniseries, team up with Scott Hepburn, Ian Herring, and Nate Piekos in Minor Threats #1.

Published through Dark Horse Comics, Minor Threats follows Frankie, previously known by her supervillain name Playtime. After years of living under the harsh reign of her villainous mother, Frankie has lost everyone important to her. When the sidekick of Twilight City’s main superhero is murdered, the Insomniac begins harassing all current and former villains for information about the psychotic Stickman. Threatened, Frankie reaches out to a ragtag team of minor threat villains for help catching the murderer.

You have heroes vs. villains, subversion of superhero tropes, comedic one-liners, and a whole lot of ingenious compositions to enjoy in this fun first issue.

Sesame Street-esque characters fight against evil corporations and deregulation in one of August’s best comic releases.

Survival Street #1 from Dark Horse Comics kicks off a dark comedy action series where former edu-tainer puppets take to the streets as vigilantes. After the United States deregulation and capitalistic profit shut down the public broadcasting entertainment show “Salutation Street,” the puppet stars are left homeless and angry. In 2031, the “puppet extremists” craft heists to continue their job of protecting and teaching children.

Biting political satire is as effective and sharp as it can get here. The design of the puppet characters takes originality to new heights, dressing the fuzzy creatures with dusty combat gear as they fight through a grimy dystopia. Survival Street is a home run comic for those who want to find laughter in our often dour reality.

Manga and comics are deeply intertwined as sequential art mediums. Samurai Doggy #1, a cyberpunk-esque adventure comic from AfterShock Comics, resembles manga by nearly every means – and this is high praise.

A young dog sees his mother slaughtered and siblings stolen before the enigmatic figure cuts out his eye in his puppyhood. Twenty years later, the anthropomorphic Doggy takes on the role of a samurai, hunting down the villains who kidnapped his littermates. Aided by a precocious kid, Samurai Doggy wields his katana on a vengeful expedition.

This comic swings for the fences, particularly in its artistic manga stylization that turns a familiar storyline into a stylish cinematic experience. Samurai Doggy #1 captures the intrinsic themes of samurai tales and adheres to the action-packed spectacle these stories exhibit. Readers will want to be loyal to this underrated comic after this sword-fighting debut.

READ NEXT: 10 Underrated Comics of July 2022 You Should Read