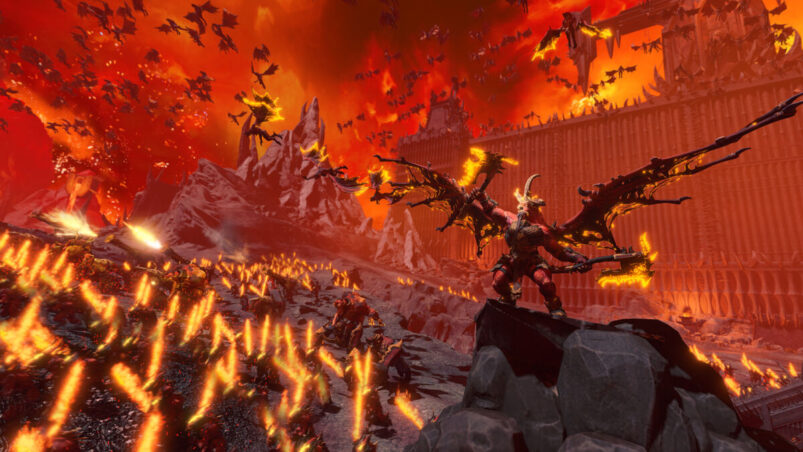 With anticipation and excitement building for the concluding chapter of Total War’s fantasy adaptation of Games Workshop’s Warhammer license, Creative Assembly invited us to a preview event to showcase the state of the game and lift the lid on several big reveals. It’s safe to say that Total War: Warhammer 3 is building upon the core systems of its two predecessors while also taking elements from other projects, like CA Sofia’s Troy. So here are the most exciting things we noticed about Total War: Warhammer 3 so far.

The Narrative: Story and Objectives

This was the first time that CA delved into the narrative and the end-goal of Warhammer 3 and, of all the Warhammer games, gameplay dynamics effectively blend with the story. The story begins with a Chaos-corrupted Kislevite lord mortally wounding Kislev’s patron Bear-God, Ursun, and the exiled Daemon Prince Be’lakor imprisoning the Bear-God at the Forge of Souls, a magical domain that exists even beyond the realms of the four major Chaos gods. Ultimately, Be’lakor, a Sauron-like entity who has lost their corporeal form and most of their great power, is seemingly set up as the main endgame antagonist for both Chaos and non-Chaos factions alike.

Each major player has its own motivations and designs upon the wounded Bear-God’s power. However, just like with the previous two games, it’s the humble elderly advisor who actively sets each faction on a collision path to battle over Ursun and their power, as the advisor needs the god’s blood to free themselves from an arcane curse. A compelling personal motivation amidst the machinations of empires and gods.

Players will inevitably make their way into Realms of Chaos, seeking the souls of four major Chaos champions to open the path to the Forge of Souls. Though the Realms of Chaos seemingly can’t be permanently conquered even by the Chaos-aligned factions, the gameplay loop transitions into a challenging mini-adventure game where the player’s forces will be beset by ravenous daemons, lord debuffs from spending too much time in these forsaken lands, armies of opposing factions, and roadblocks of all kinds. On the whole, this iteration of the campaign feels tighter, more player-oriented, and competitive.

The Final Faction: Daemons of Chaos

Crucial to the game’s narrative is the final revealed eighth faction – the Daemons of Chaos. This faction combines the forces of all four Chaos gods into one, led by a powerful Daemon Prince, in fact, the very corrupted Kislevite lord who wounded Ursun in the first place and set everything in motion and now who hungers for godhood. In other words, this is a version of a Chaos Undivided faction where players will have the freedom to mix and match the forces of each Chaos god and tailor their avatar Daemon Prince to whatever role and playstyle they desire.

The core mechanic of this faction is Daemonic Glory, a resource players will gain by completing quests, constructing requisite buildings, and dedicating conquests to a patron Chaos god or Chaos Undivided. Daemonic Glory will accumulate and unlock units and heroes of the relevant god, but also unlock various body parts for the Daemon Prince, giving players an unprecedented amount of customization options and ability to tinker their lead Daemon Prince to their heart’s content. Altogether, the faction feels like a mix of Norscan dedication mechanics with the unlock systems of the updated Beastmen faction.

The Daemons of Chaos certainly provide grounds for exciting and challenging gameplay, due to the sandbox nature of the faction giving players great leeway and control over their faction’s playstyle and Daemon Prince’s gameplay identity. However, there are some concerns that by essentially combining all mono-Chaos god factions into one, it feels like the Daemons of Chaos faction may overshadow or tread on the toes of its brethren factions, especially on the tactical layer. In addition, for all the apparent depth of the Daemonic Glory system, there’s still noticeable feature stripping in that the headlining Daemon Prince lords lose ancillaries altogether and their skill tree, compared to every other lord and faction, seems underdeveloped.

Alongside the final faction reveal, the Warhammer 3 preview also shone a light on a number of gameplay updates, chief among them being the enhanced diplomacy system, which looks to address not only issues of transparency, but also ally and vassal usefulness. The addition of a deal tracker and a quick deal button from Three Kingdoms is greatly appreciated, as it’ll make diplomacy far less frustrating and finicky than in past Warhammer installments.

The most impressive element of the enhanced diplomacy system is the expansion of war coordination options for allies and vassals. Aside from the usual “mark target and hope the AI follows through” command, players now earn an Allegiance resource, which they can use to directly request allied armies for an allotted time, and also to recruit allied units from constructible outposts. Allegiance is earned passively and by taking ally missions for eliminating rampaging armies and other nuisances.

Multiplayer is also getting a number of welcome additions. Most prominently, Warhammer 3 will now sport campaigns that can go up to eight players, which is a huge jump from the stale and limiting two-player games. It remains to be seen whether the promised three-game Mortal Empires mode will boast similar numbers.

From the tactical side of things, CA is bringing back the Domination mode from Shogun 2, where teams will fight over capture points and vital locations spread over the map. More modes is great and all, however this re-addition is bittersweet given that Shogun 2 also touted an incredible and evolutionary Avatar Conquest multiplayer mode, which will be sorely missed in Warhammer 3.

Total War: Warhammer 3 is definitely poised to be a big conclusion to CA’s venture into the fantastical. There was also plenty demonstrated that was more of a mixed bag in implementation, which makes it seem that CA isn’t quite firing on all cylinders. Nevertheless, Warhammer 3 looks exciting while feeling grand and fittingly chaotic, and it’ll be interesting to see how it all comes together when it finally releases.