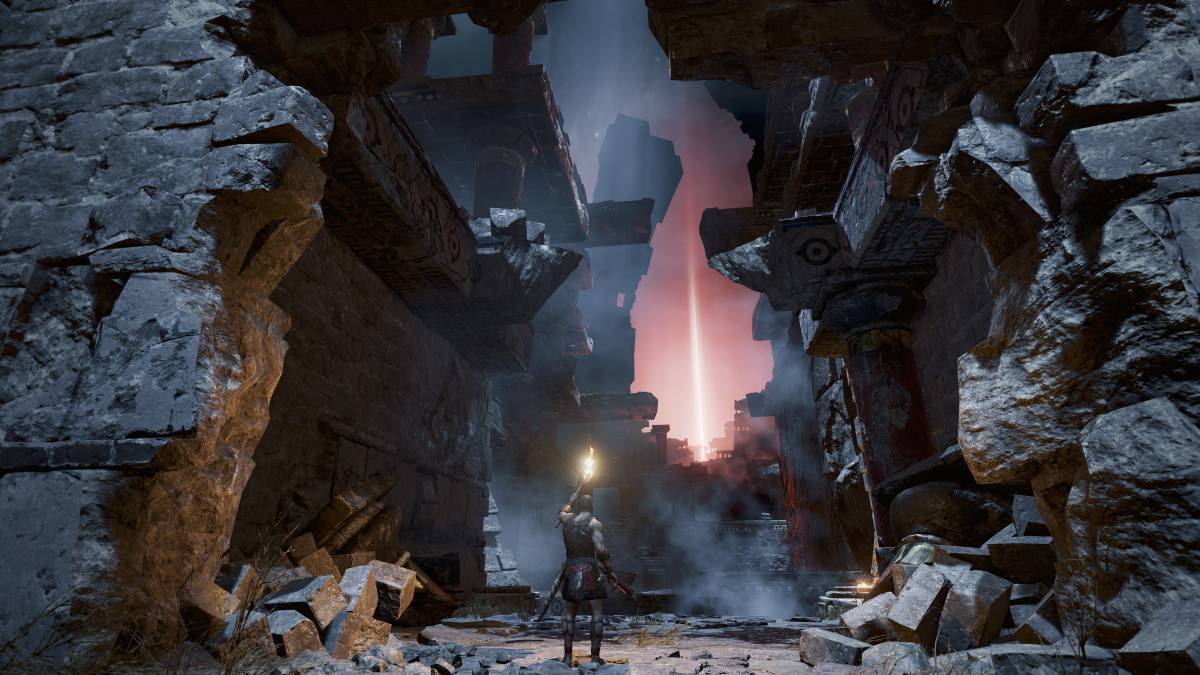 Despite the vast amount of tales within Greek mythology, there is a surprisingly small amount of games that use them. Influences are unavoidable in day-to-day life, especially with many modern tropes already having their origins in Homer and Ovid, but adaptations are almost a no-show. Thankfully, the makers of Theseus have decided to adapt one of the more famous myths into a video game – a cinematic VR game at that. This third-person action game will have you fighting against the spawn of the Minotaur, as you barely manage to find your way through the labyrinth to get to Ariadne.

The most noticeable change to the myth is the lack of yarn. Theseus also slips his way in and out of death, falling into Limbo every time he’s killed, only to march right back out the not-so-pearly gates. Instead of carrying a charming little ball of yarn around with him anywhere he goes, so he can find his way back, this Theseus doesn’t seem to be interested in finding his way back out. He only seems interested in killing the Minotaur and saving Ariadne, who stays in contact with him for most of the game by being either a glowing white silhouette, or a glowing white stream. Although subtitles are stylishly superimposed around you, Ariadne speaks in Greek during the whole game, which definitely aids the immersion. 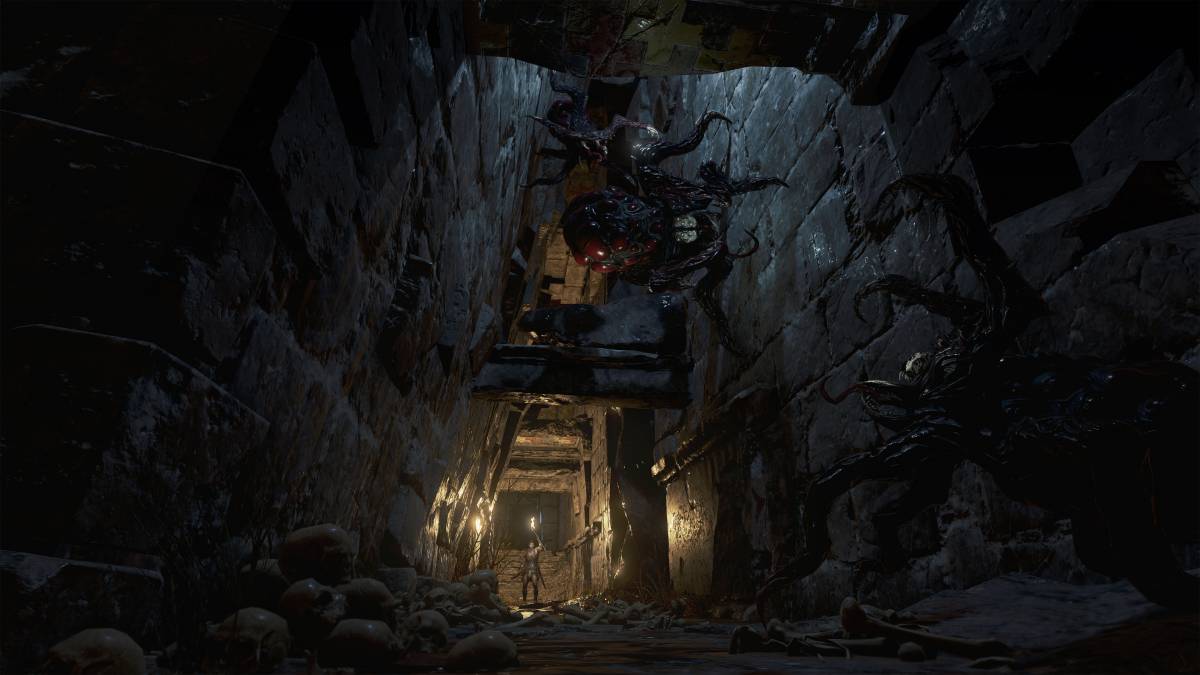 However, and this is important, what absolutely does not aid immersion is the fact that this is a third person VR game. Have you ever wanted to be a brick wall or the world’s most trusted cameraman? Well, now you can, because for the sake of cinematic VR and showing Theseus’s glistening biceps struggling through Limbo, the game does not let you see anything in first person. You’d think that the most cinematic VR experience would be done in first-person, but apparently third-person is the way to go. Not only this, but the game is played with a standard controller, with not a single motion component other than looking around and seeing that your body is a meter away.

The previously-mentioned Limbo is quite different from the over-world. While the over-world is very rocky, very solid, but at the same time a single Minotaur rampage from falling apart, Limbo is more of an endless liquid plane, with floating debris in the air. The poetic description of Limbo is that it looks like it’s made of shattered memories, with elements from the over-world present, but in pieces. Near the end of the game, the over world has floating debris as well, on one hand showing how the whole place is falling apart, on the other hand showing that everything in the labyrinth is near death. 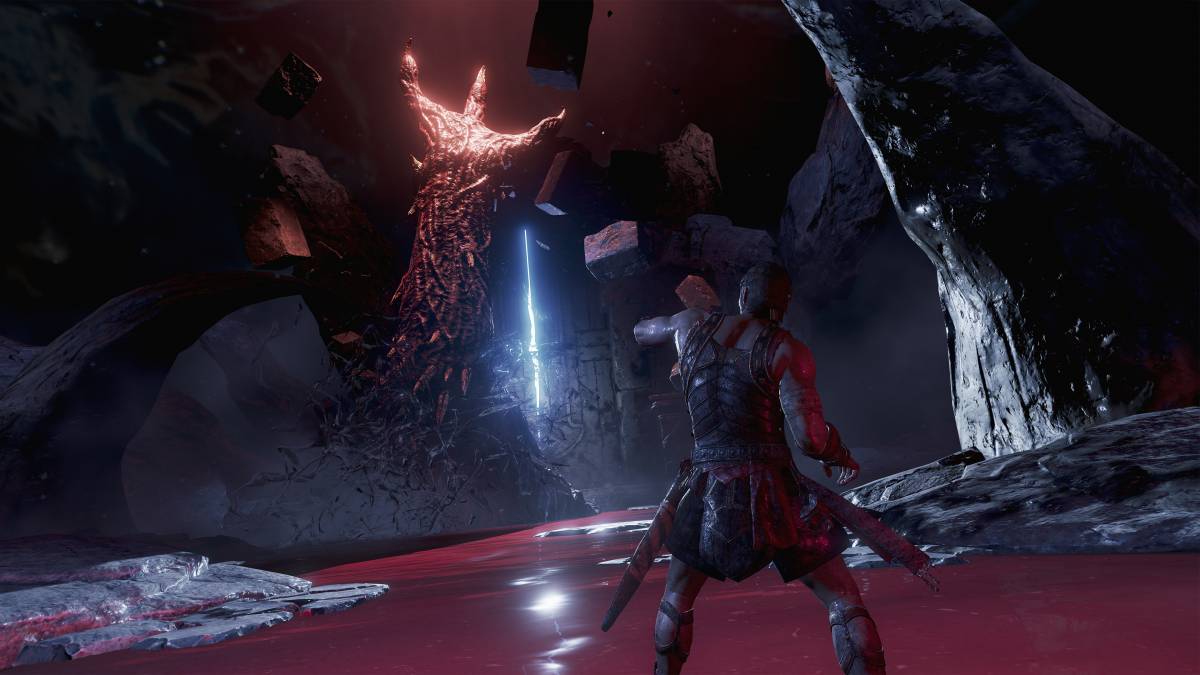 The infamous Minotaur itself has gone through a big change since 500 BC. No longer is it just your everyday half-man half-bull, no. There’s something much more evil afoot here, and the Minotaur is right in the centre of it. A ten-meter humanoid abomination with six white horns and a lot of black goo is here to make you forget why we have walls. In fact, it’s also fast and overpowered, killing you with a single swipe, leaving you no chance of survival if you get in its way. Thankfully, there’s no Crusaders of the Lost Arc-style running from the Minotaur that razes everything in its way, but instead, stealth and caution is required if you want to survive. You need to know when to sneak, when to run, and you need to get your timing down, or else you’ll be smacked back to yesteryear.

However, the Minotaur isn’t the only foe you need to look out for in this game. That black goo has infected large parts of the labyrinth, spawning spiders, and blocking your way. The good thing is that these spiders both are scared of fire (provided you swing it in their face), and are easily burnable, letting you kill them with a single QTE instead of slashing at them until your thumb is sore. Due to the sheer strength of the Minotaur, the spiders are the only in-game enemies you are capable of fighting and killing, which can get a little repetitive, but since the game is short, you’re not likely to tire of stabbing giant burning spiders.

The game generally looks very good, except for the fact that you can count the pixels on the PS VR screen. It’s quite possible, likely even, that this game would’ve been better if it hadn’t been built for VR, which is a shame, because the VR trend genuinely needs games that showcase the full potential of VR, which this game does not do.

Theseus manages to take a renowned myth and spin it into a tale of its own, which is a feat in itself, with the ending being a genuine surprise that you can only see coming -at best- moments before it strikes. The design of the Minotaur is frightening, and there are areas that will have you feeling claustrophobic even in third person. The music rounds off the whole experience with a shiver down your spine, but in the end, it’s be nice if the game were more than just that.

Verdict
All in all, Theseus falls short of what it tries to do, instead being an underwhelming and short VR experience. The concept was good, but would have suited traditional gaming consoles more than VR, and the gameplay also is not really fit for VR. However, the game is still enjoyable, and since it has secrets leading to a second ending, it has replay value, too.
6
Cultured Vultures is a pop culture website established in 2013 covering all things gaming, movies, and more. We eat your words.
All The News On Your Favourite Games