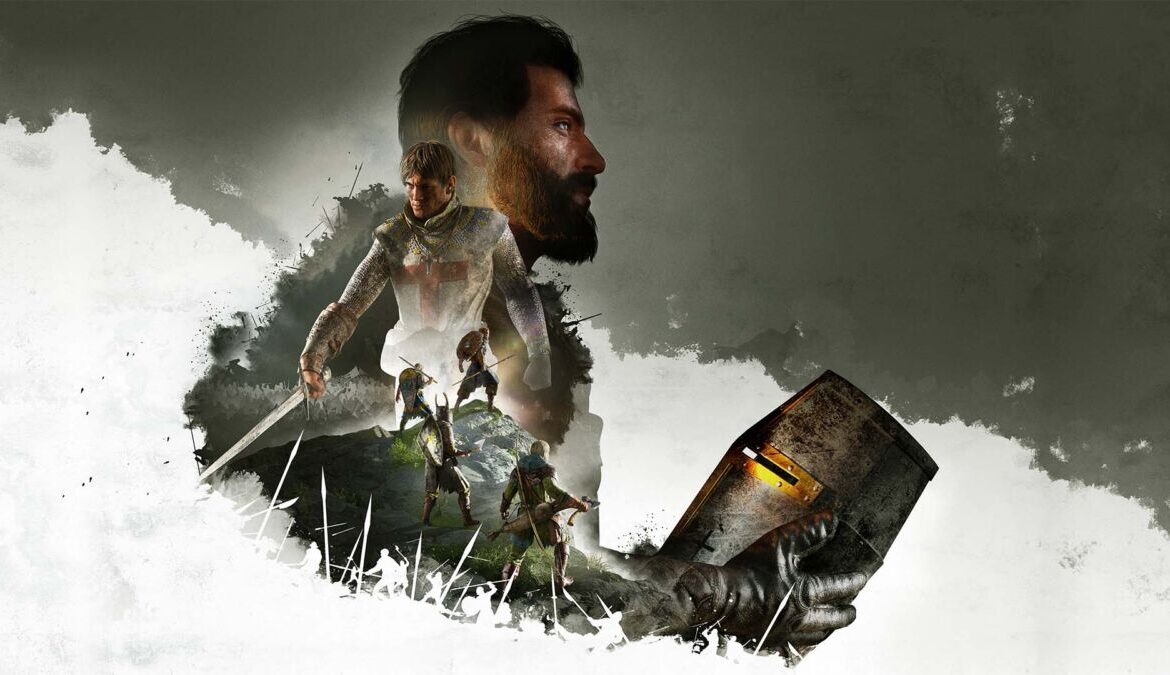 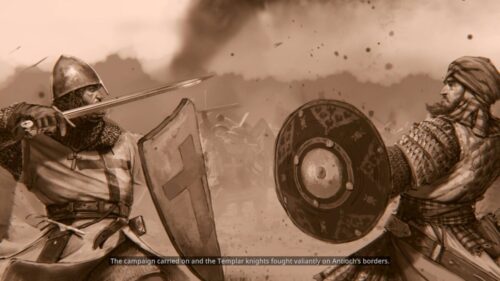 When it comes to the medieval-inspired aesthetic, fantasy settings have certainly taken the lion’s share of strategy game worlds. This makes historical medieval strategy games all the more enticing when they do release, due to their generally sparse presence on the market. The Valiant makes a compelling case for being one of the better games in this historical setting with its distinct narrative and robust combat system.

KITE Games’ The Valiant sees you taking on the role of Theoderich, a retired crusader knight who’s seen their comrade-in-arms fall to the corruptive effect of an ancient and mysterious artifact. You’ll get to experience Theoderich’s quest to solve the mystery of the artifact and perhaps save his knightly brother from madness through a relatively lengthy solo campaign.

Throughout the campaign, players can expect to find loot, level up their heroes, meet an eclectic cast of characters, recruit mercenaries to fill out the ranks of your warband, and, most of all, engage in fast-paced real-time squad-based micro-intensive skirmish style combat, a la Company of Heroes. For added replayability, the developers even put together a co-operative mode, akin to Warhammer 40000: Dawn of War 2’s Last Stand, as well as a competitive multiplayer mode where you can put your tactical knowledge to the test against other medieval enthusiasts.

The Valiant’s presentation does quite a solid job of introducing you to the game’s world with audio design and story-telling choices being particular highlights. The voice acting is energetic, clear, and mixed well throughout the game, even when some over-the-top accents do make their way into the dialogue. The thematic writing goes hand-in-hand with the voice acting and really brings the characters to life.

Music is dynamic and effectively reflects the state of the battlefield and the mission at hand, slowing down for tactical pauses and then going full swing into pulse-pounding percussion and fitting melody when battle begins. Weapon sound effects also help to create a lively soundscape when your forces clash with the enemy, capturing the feel of an intense and brutal brawl.

Though the story itself isn’t the most original aspect of The Valiant, the developers cleverly chose to exposit the story mostly through in-mission character interactions and beautifully illustrated cutscenes. This approach pairs nicely with thematic narration from your accompanying monk who recruits you at the start of the game and reflects on your travels by practically writing their manuscript in front of you and illustrating key moments in beautifully inked-out detail.

The game falls a bit short in its audio and narrative presentation, however. Maps are generally readable, with plenty of color reflecting different biomes and important areas of the map, though there are some minor areas of confusion where patches of basic tall grass can sometimes look quite similar to patches of cover that can actually hide your troops. Character animations are also a bit stiff during in-mission cutscenes and don’t accurately translate the same energy as the dialogue or voice acting, but they’re serviceable enough to get the characters’ basic idea and emotional state across.

However, it’s in the tactical combat systems where The Valiant’s true strengths lie. The first positive aspect is that the micro-oriented gameplay that focuses on positioning, timing, and precision is inherently engaging, as there’ll always be something to keep you busy. This also means that there’s a decently high skill ceiling in both solo and multiplayer modes for you to hone your skills and continue improving.

The devs included a solid array of distinct units with their own impactful battlefield abilities to distinguish tactical roles. The dev team clearly understands the core point of interest in tactics games where players maneuver and jockey to create the most optimal engagements for their units and prevail over their opponents. However, some engagements can turn into amorphous mosh pits with little potential for interaction and maneuvering, though luckily these situations are generally uncommon.

Hero units, equipment, skill trees, and loot also help elevate The Valiant’s tactical gameplay. Heroes, while powerful, are limited enough in that they don’t come across as broken super soldier units that make most others feel pointless. You’ll need to carefully balance the use of your characters with basic mercenary units for an all-round force capable of responding to different threats and situations. Unfortunately, the devs didn’t include much pre-mission information for you to build your warband around, which does limit some player strategic decision-making potential.

The simple equipment and skill point systems provide just enough customization options that trying different unit builds is a perfectly valid way of approaching the game. You can just as easily specialize your heroes into a dedicated path or go for a more broad approach for a jack-of-all trades style composition.

The Valiant does include a limited construction system where you can build towers, palisades, traps, and other items, but altogether this is perhaps the weakest component of the game as it does more to concentrate the action into grindy mosh pits than open up opportunities for clever thinking. This system only serves to confirm that the game really shines in its combat paired with opportunities for maneuvering and quick adaptation.

Mission design is another of The Valiant’s strong suits. There’s a great variety of missions with multiple objective stages. Missions can range from defending against ambushes, holding on during a desperate siege, and all the way to climactic boss battles where unit knowledge and quick reaction will be tested to the max.

Essentially, the developers do a solid job of keeping the campaign fresh with distinct environments, enemy types, and objectives. In addition, after completing campaign missions, you’ll unlock challenges for each mission, which adds layers of replayability to the campaign, even though the story itself follows a linear path.

Unfortunately, The Valiant is just a tad too safe for its own good to be truly classified as a great strategy game. In terms of its gameplay it’s quite reminiscent of Destructive Creations’ Ancestors: Legacy, which is also a medieval-set real-time action tactics game, though with less of an emphasis on role-playing and characters. Also, The Valiant is yet another strategy game that’s once again primarily set in Medieval Europe, an era of history that’s already been done to death in strategy gaming.

Despite its mixed ambition and safe choices, The Valiant still has a few interesting ideas going for it. For one, the devs incorporate Christian theology as the backbone for their low fantasy elements, which is reminiscent of Arthurian legend and its treatment of Christianity found in games such as NeoCore’s King Arthur: Knight’s Tale. The treatment of religion as a kind of mythological inspiration for unique stories is in itself an original idea and the way it’s presented in The Valiant is something we’d like to see more of.

Performance wise, The Valiant ran smoothly with barely, if any, frame drops, which is exceptionally important for a micro-oriented action tactics game. If you’re able to match recommended specs or even lower, the game seems to be optimized well enough that you shouldn’t encounter many performance issues. I didn’t encounter any significant bugs or crashes, which bodes well for the game’s overall stability.

When it comes down to it, The Valiant is a perfectly simple, yet effective and engaging action tactics game that understands its setting and its major strengths, which is its combat. There are a few minor kinks, as well as some safe game design choices that make it a solid game, but not a great one.

The voice acting, writing, and narrative presentation deserve special mention in immersing you in its world and the knightly quest that you must go on. Ultimately, The Valiant is a solid medieval strategy game that’s certainly worth your time and we can fully recommend picking it up. 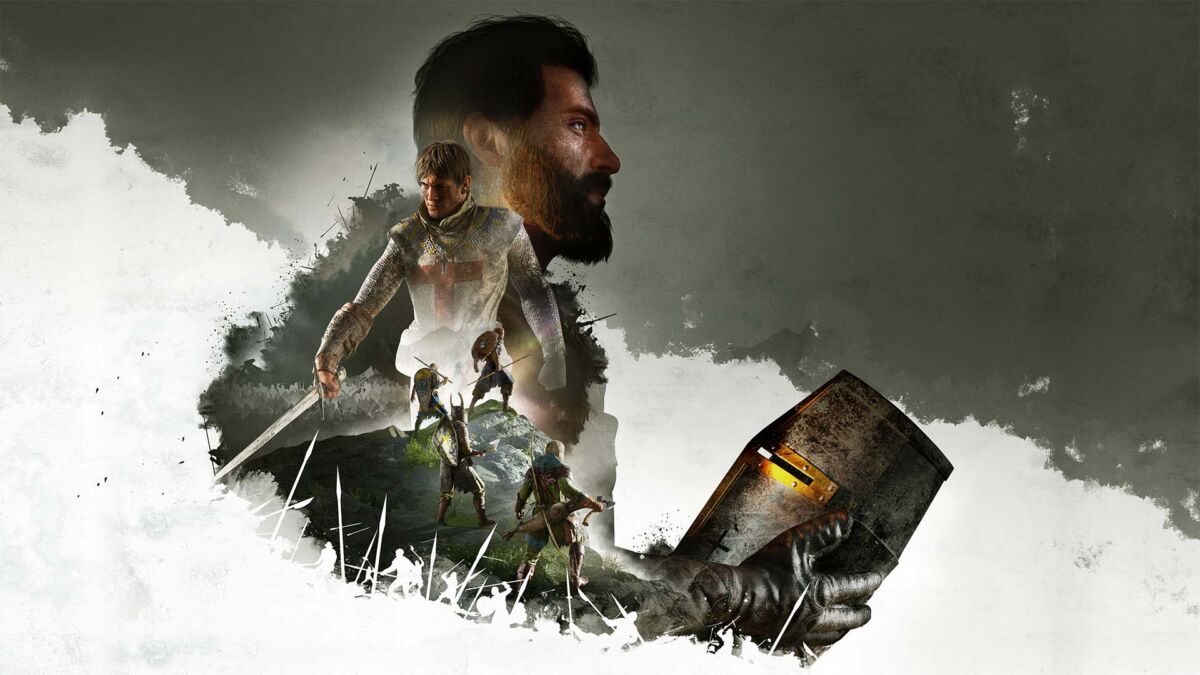 Verdict
A simple but engaging action tactics game with solid presentation and a neat setting that’ll easily make you want to take up your sword and go questing.
8
Cultured Vultures is a pop culture website established in 2013 covering all things gaming, movies, and more. We eat your words.
All The News On The Biggest Games