It took a decade, but we finally have the successor to Fallout: New Vegas we deserve. 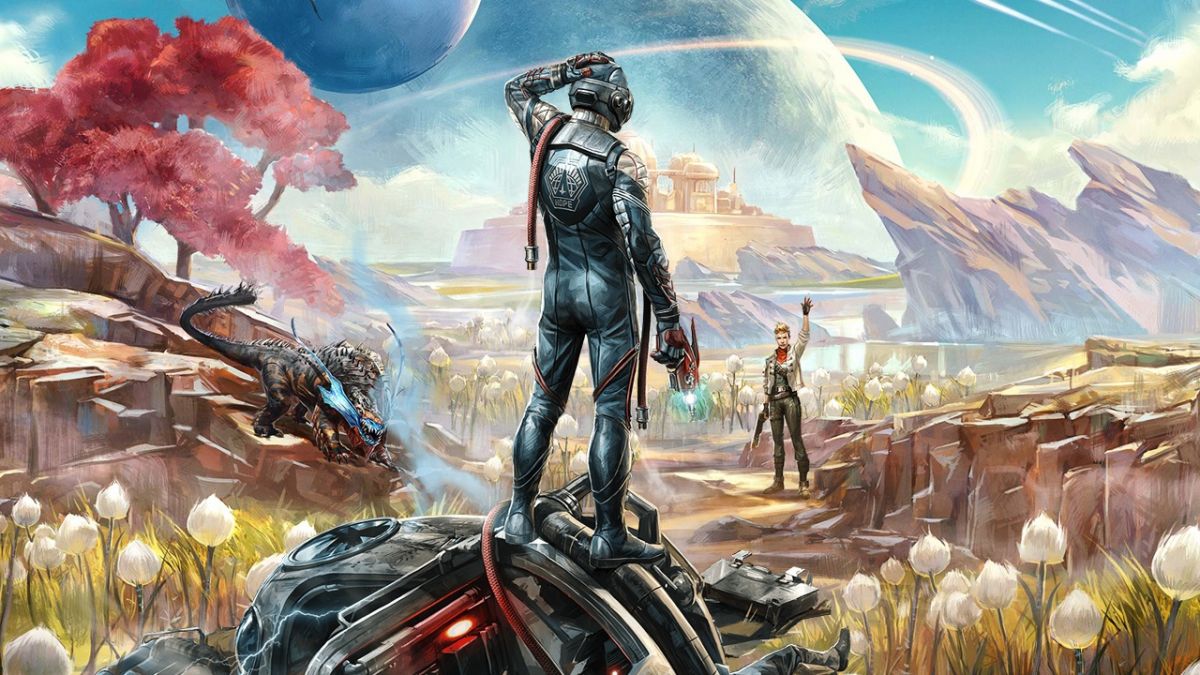 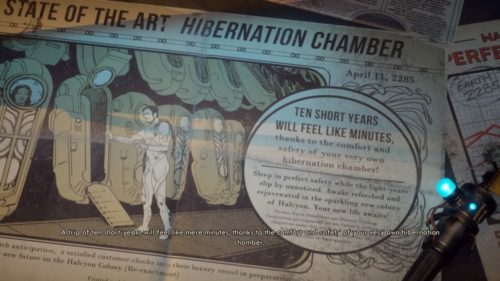 The Outer Worlds opens up as Phineas Wells, Doc Brown’s socialist brother and corporate fugitive, busts you out of a derelict colony ship. Almost as soon as you wake up, he blasts you out into space again to meet one of his contacts. As a character creator and way to set the tone, it’s nothing less than brilliant. 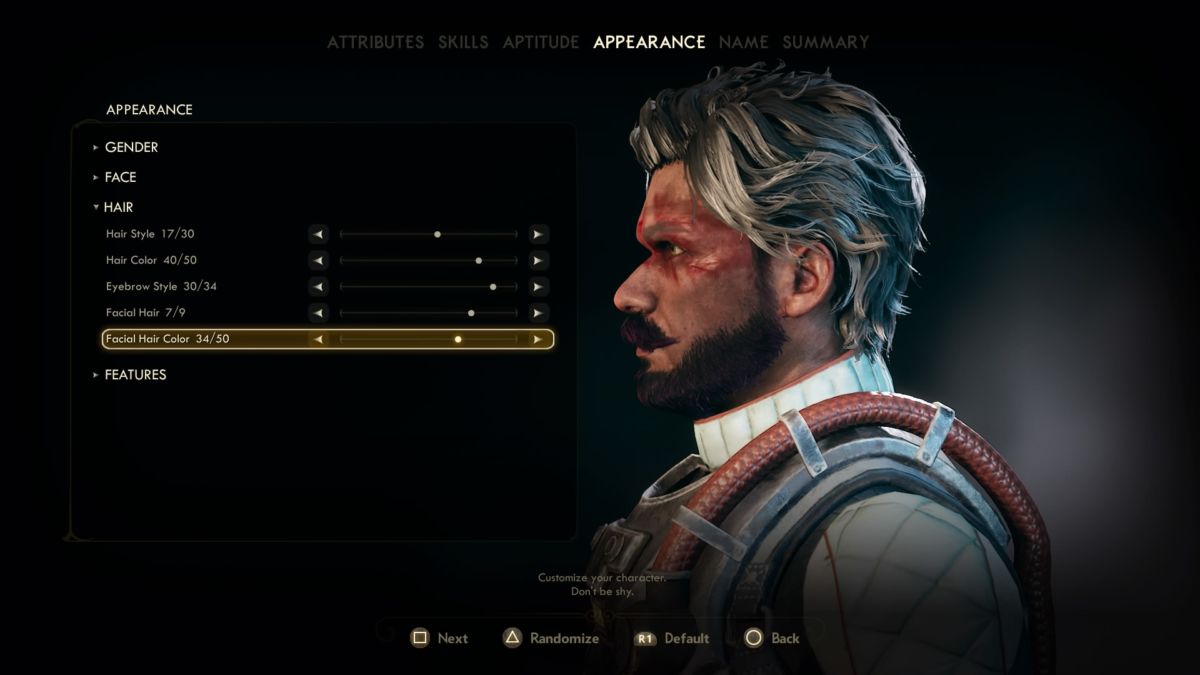 Obsidian invites us to visit a world where corporate power and extreme capitalism have gone completely bonkers. Everything here has a price, and everything is done to protect the bottom line of The Board. Inhabitants in the colonies don’t even own the right to their bodies or life. People will struggle to utter corporate slogans as they bleed out on the ground, and the local constabulary offers a discount when you buy more than three criminal investigations at the same time. It’s an absurd world that you laugh at, though at the same time, you can’t help but feel how darkly plausible all of it is.

It has been a while since I became this engrossed in a game and its world. Obsidian achieves this in large part due to how they intertwined their excellent writing with RPG mechanics. Seemingly everything in The Outer Worlds feeds into the dialogue and how the world perceives you. What skills you have, the companions you bring, the choices you make, even the armor you wear can influence how interactions play out. 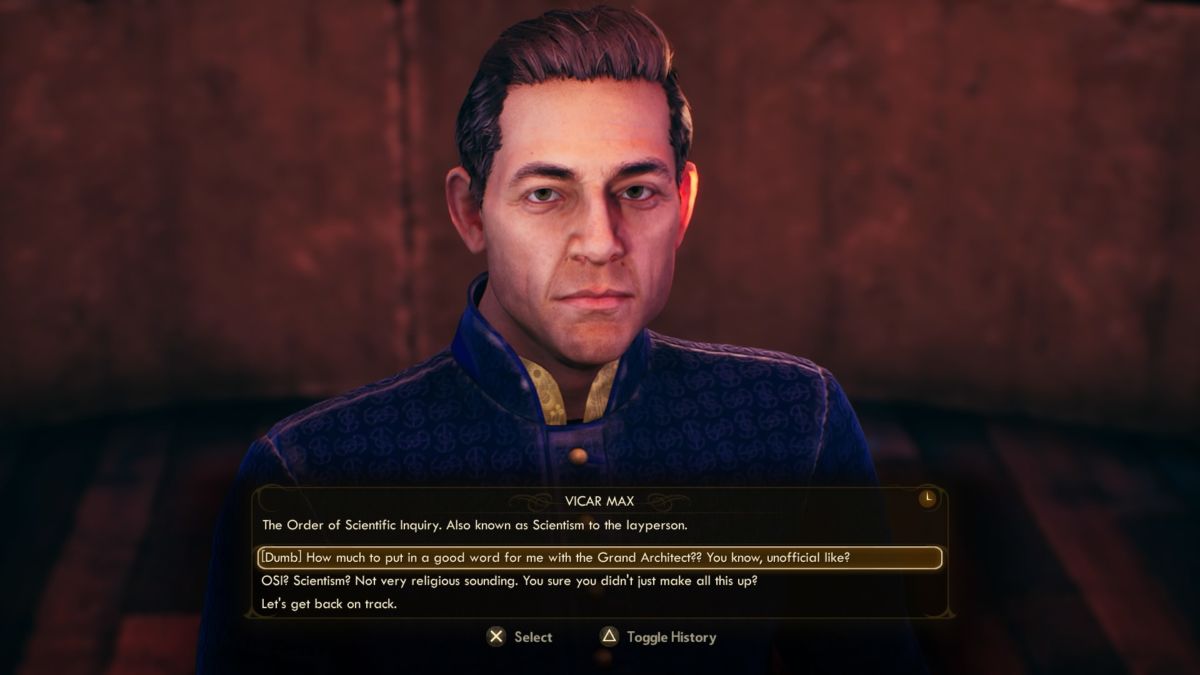 One early quest demonstrates this quite well. On the outskirts of Edgewater, the first settlement you encounter, you meet an odd fellow who distrusts robots. He tasks you with finding one of their malfunctioning ‘scouts’ and to ‘take care’ of it. On my first playthrough, I played as a character who was good at fighting and talking but much less adept at machinery and engineering. The encounter with the robot ended with a heap of scrap and a quest solved.

On my second playthrough, I was a guy with below-average intelligence, but with high science and engineering skills. I also brought a companion along with me this time around, and as we approached the robot, she offered to try and fix it instead of fighting it. Me being a mentally challenged engineer scoffed at her offer and decided that the best course of action was to bang on random bits until they worked nice and proper again. 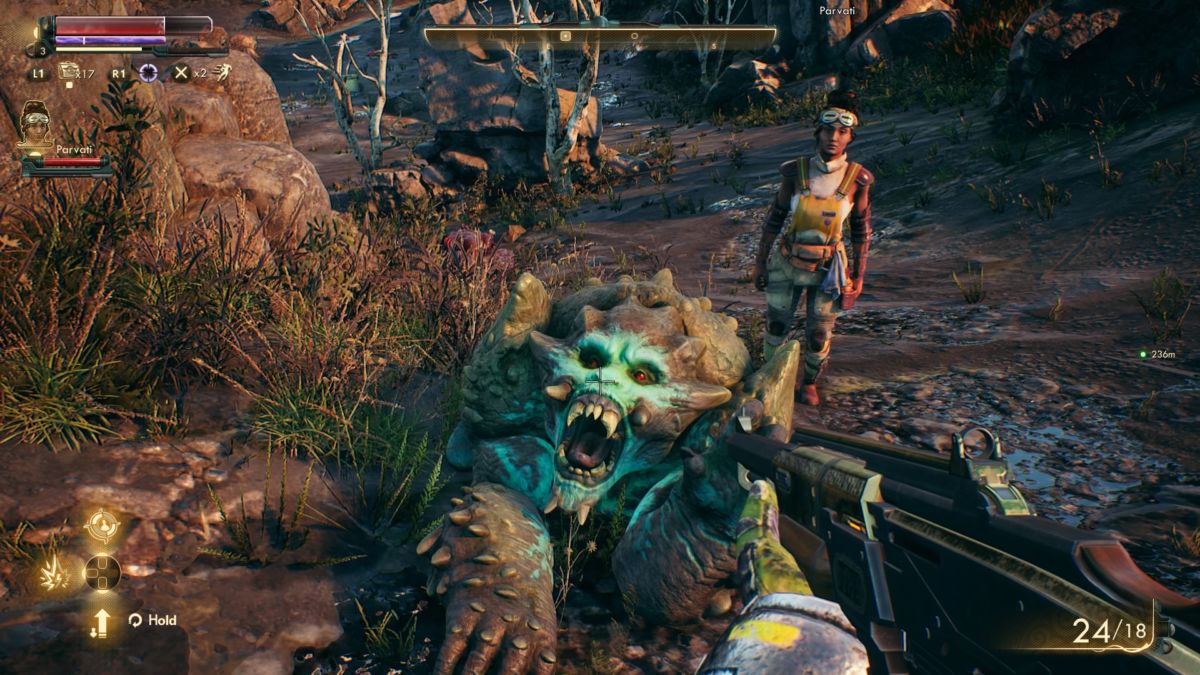 The way the game manages to take these different skills and situation into account is what makes The Outer Worlds so fun and rewarding to play. Sure, not every quest ends drastically different, but the flavor and tone of how they’re resolved is greatly affected by what kind of character you are. Even the fact that I can play an unintelligent character and have meaningful and sometimes hilarious exchanges with the world’s inhabitants means a lot. It’s not that The Outer Worlds is the first game to allow you to play dumb, but it’s probably the first game that makes it a viable option for your playthrough.

Anyone who has taken a cursory glance at the game can immediately see the parallels between The Outer Worlds and Bethesda’s Fallout series. Indeed, it’s quite remarkable how similar the Unreal Engine feels in The Outer Worlds to the Creation Engine Bethesda uses. Items and objects such as doors and locks you can interact with look almost identical to how Fallout handles it. Even conversations have that patented Bethesda ‘zoom-to-face’ look. 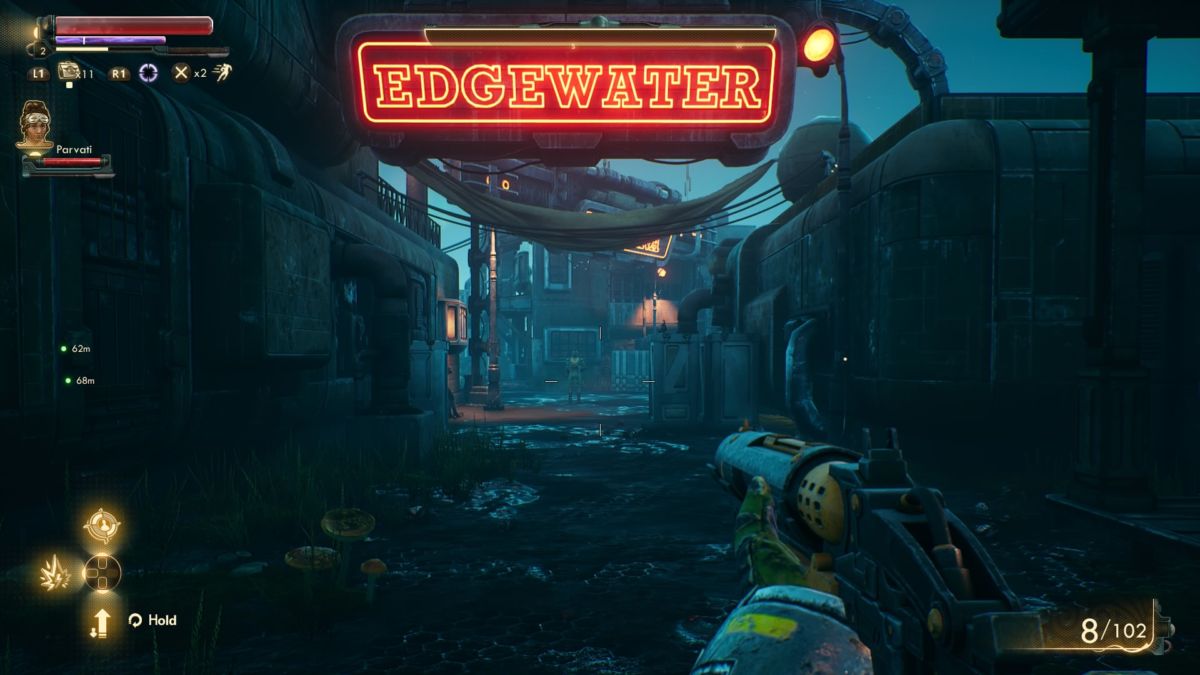 If there’s one thing you can count on in a Fallout-esque game, it’s glitches. Scripts will fail, objects will fall through the world or save games will become corrupted. It’s almost part of the flavor of those games at this point. Luckily, during my roughly 30 hours with the game and my 1.5 playthroughs, I encountered very little trouble playing The Outer Worlds, which feels like a minor miracle given what we are used to in these kinds of open-world RPGs.

Playing on a base PS4, however, does come with some drawbacks. The textures are rather muddy, and the infamous Unreal Engine texture pop rears its ugly face in almost every scene. In some dialogues, it will even pop back and forth as characters speak to each other in the same scene. Loading times can also be on the long side, though thanks to a more modern engine, we no longer have to load each time we enter a new house. 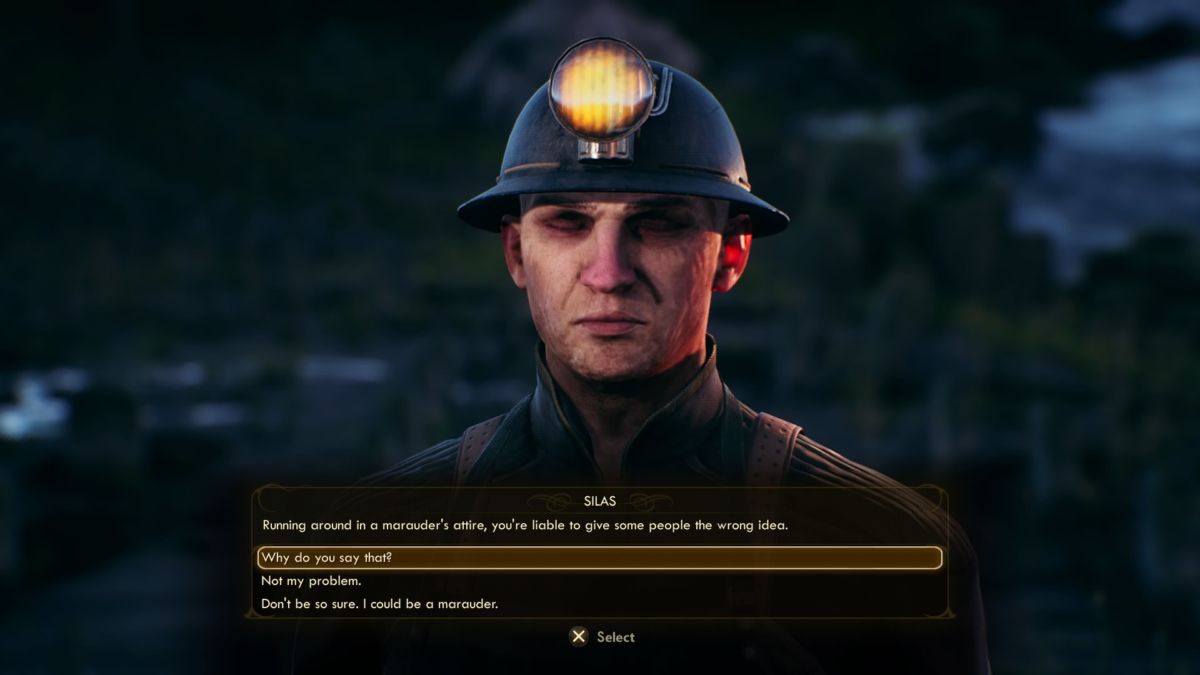 Aside from that, I enjoy the visual design in The Outer Worlds. It’s bright and colorful in that 60s sci-fi, Flash Gordon sort of way. Compared to the mostly brown and grey colors in Fallout’s landscapes, this is a whole lot more enjoyable. The brighter colors also fit the dry and goofy humor in the game rather well.

Meanwhile, the moment-to-moment gameplay is somewhat similar to recent Fallout entries. You follow a compass to points of interest to explore and visit settlements to trade, talk and pick up more quests. The structure is slightly different in The Outer Worlds, with Obsidian limiting the scope and size of the areas you visit. Each location only has a handful of places to go, and the maps are smaller and less populated compared to your average Fallout or Elder Scrolls game. On the other hand, The Outer Worlds lets you take a spaceship to many different planets and locations, which offers a whole lot more variety in topography and visuals. 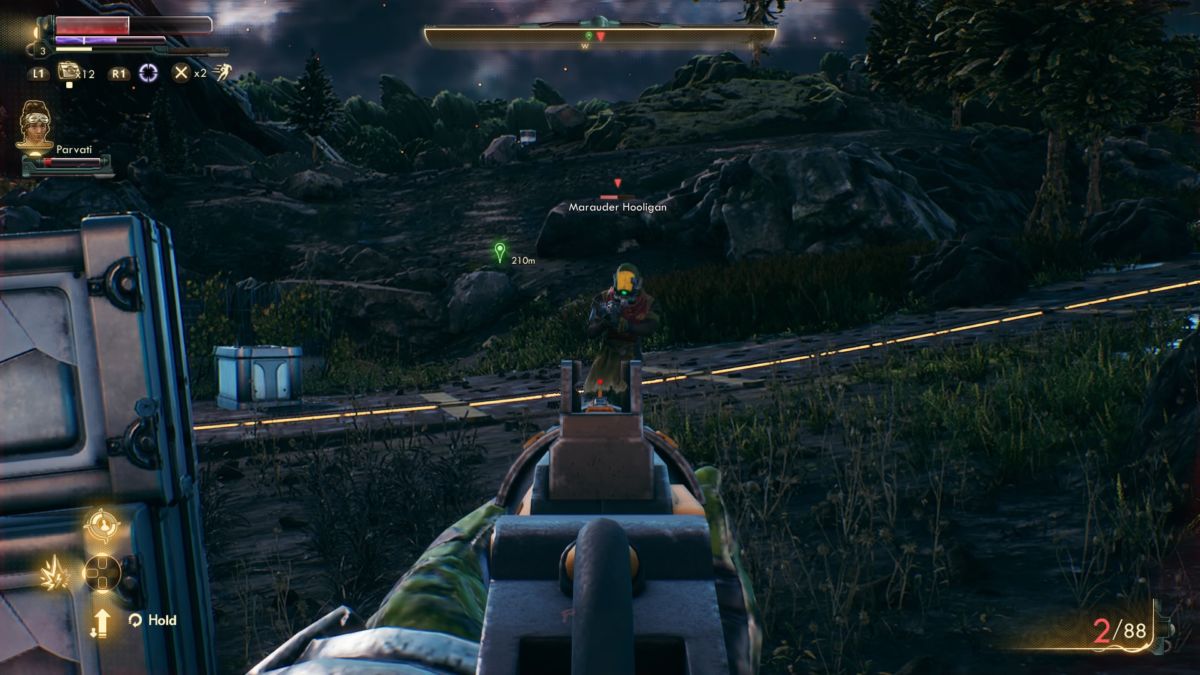 Your ship, The (Un)Reliable, also serves as your base of operations and lets you set up your party or talk with your crew. These small aspects remind me of Mass Effect in a very positive way, and I mostly enjoy the company of all the companions you can pick up in The Outer Worlds. Much like Mass Effect, you can bring two companions with you at any given time, and if your leadership is high enough, they can perform devastating power attacks when you press left or right on the D-pad.

The companions also boost your stats while engaging with the world at large. Having the mechanic Parvati in your party won’t make you a master engineer but it might just push you over a skill-check threshold. Companions also often interact with other people around the world and can unlock extra side quests or paths if you have them with you. Therefore, it’s good to consider who to bring along when heading down to a planet. 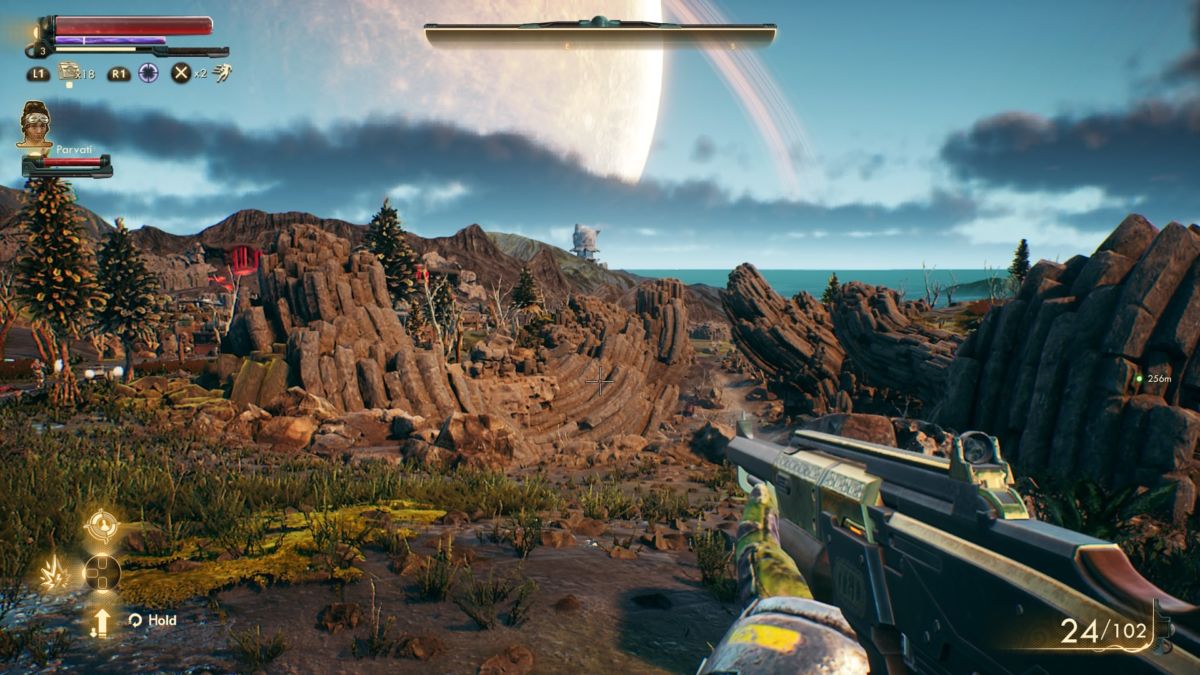 As mentioned before, The Outer Worlds is rather open-ended and encourages multiple playthroughs. You can even subvert the main storyline completely if you want to. Almost as soon as you make landfall after Phineas Wells saves you from the colony ship, you can turn around and betray him to the company. Though I have not quite finished a second playthrough, I can confirm that the choices you make throughout the game can have some pretty drastic consequences in how things shake out.

The only real blemish to The Outer Worlds is the combat. While it’s lightyears better and more fun to deal with than in any Bethesda RPG, it plateaus and becomes rather rote after the first few areas you visit. Slowing down time and taking precision shots is fun for the first few hours, but the overall combat doesn’t change much from hour one to twenty. Playing on harder difficulties does improve things somewhat since your skills and perks become all the more essential for survival. Likewise, the loot aspect is not that interesting. Aside from a few special weapons, you will largely see the same guns and gear throughout The Outer Worlds.

Despite the amount of murdering you do in the game, the somewhat weak combat did little to affect the great time I had with The Outer Worlds. It’s an almost instant classic with some of the best character interactions I have had in years. That it manages to interweave so many different systems and aspects and still come out coherent in the end is quite an achievement. That it’s also genuinely funny is a minor miracle.

Verdict
The Outer Worlds is an excellent RPG with a ton of memorable moments and a brilliant, satirical tone that holds all the way till the end.
9
Buy on Amazon