Home
Opinion
The Day Today 25 Years On: Those Are The Headlines, Happy Now?
TV
·6 min read

The Day Today 25 Years On: Those Are The Headlines, Happy Now?

The Day Today may have been fiction, but the underlying corpuscular dynamics were all too real - and 25 years on, it's still eerily familiar. 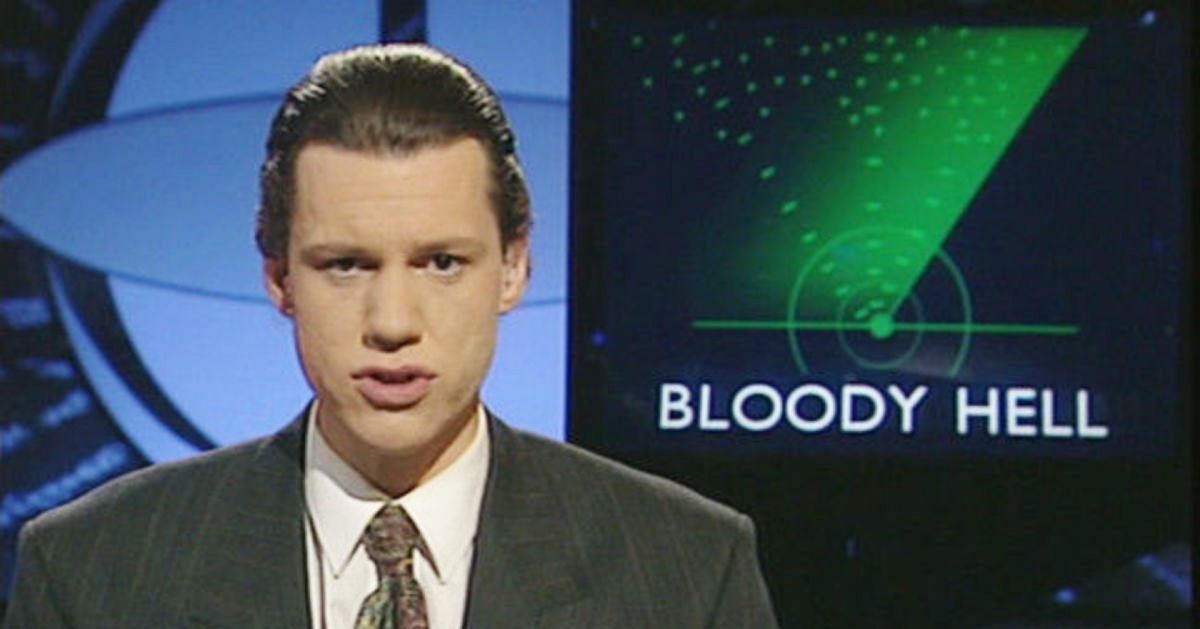 “May your house be live on CNN!”
– Balkan curse

This little epithet dates back to the crazy days of the ‘90s and the Yugoslav wars, when your house appearing on CNN meant that either your name ended in ‘Milosevic’, or it had just been hit by a missile. It was also at about this time – 25 years this past Saturday – that Chris Morris’s legendary news spoof The Day Today was unleashed upon an unexpecting population. Much like CNN’s presence in the fracturing Balkans, Morris promised ‘The Day Today will be providing the most immediate coverage of any war ever fought’.

The savage twist was that here, it was a war that his near-inhuman news anchor had started only seconds before, by pitting government ministers from Australia and Hong Kong against each other. And why? To feed yet more human sacrifices to the Molochian chattering cyclops which he served – that is, to create news. (As the bumpers put it, ‘fact times importance equals news’ – a vulgar way of putting the viewer-driven formulation which has always driven the media.)

While recent years have seen some fairly definite rejections of the news media holding this terrifying level of soft power, in many ways The Day Today still seems prophetic. Most obviously, there’s the absurd digital graphics – or at least, they were once absurd. The Day Today’s interstitial sequences were whipped up by the same guys who did them for BBC news, only they had months to work with instead of hours, so they could go all out and have some fun with it. But as technology evolved, the real news began to look ever more like its satirical cousin once did.

Very early in the first episode, The Day Today brought in Morris’s inimitable vox pops and the then-primitive concept of the news using home video footage – the Youtube phenomenon being, in its barest essentials, the bastard son of both these troublemakers. The use of purported home video was largely a matter of convenience, allowing them to include grainy clips of, for instance, the time then-PM John Major punched the Queen, but the vox pops were a Morris speciality. They were a vindication of the idea that a surprisingly large number of people will do anything if there’s a camera pointed at them, with innocent vulnerables readily being interviewed about absolute nonsense on the basis it’s a smartly-dressed posh-voiced man with a microphone opposite them.

The vox pops were a very special brand of gibberish, the kind of thing Sacha Baron Cohen’s been chasing after his whole career but has never equalled. Morris would come out with interview lines which almost – from a certain point of view, maybe viewed through smoked glass – made sense, and the hapless interviewee would do their best to answer in the same language of illogic. Would you like to see the law tightened up? Of course, law’s important, who wouldn’t? Ok, so let me stretch out this rubber band – this tight, or this tight?

(The business and weather segments used a similar system of familiar-sounding nonsense – all the right words were there, but the sentences spiraled off into a labyrinth.)

The Day Today was a straight-up TV adaptation of Morris’s earlier radio work, On The Hour (‘a magazine programme, with a very broad brief’), and between the music shows and the disgusting majesty of Blue Jam, it’s on the wireless that Morris seems to be most in his element – yet it was The Day Today which went stratospheric. It laid the foundation for the celeb-baiting Brass Eye, which, airing on foot-stamping upstart Channel 4, was slightly less averse to hard-hitting topics like drugs, sex, and paedophilia, though The Day Today didn’t shy away from the blackest of humour, including what is to my knowledge the only bit Morris has ever apologised for – a skeleton swinging in a noose, cheerfully declaring ‘Hello! Ian Curtis here! I watch RokTV every day!’

Running through On The Hour and The Day Today was the division of the programmes into more-or-less standalone ‘packages’ – drawn from real-life news media and Morris’s experience in the same, and at a glance not completely dissimilar to the comedy sketch-show format. This successfully incorporated the various different newsdesks into one coherent whole – but never was this more obvious when it’s a section like the aforementioned RokTV, with Morris playing every part in elaborate costume and make-up, and, one can easily imagine, having spent sleepless nights editing it to the nth degree.

For fans of British comedy – or the British media in general, come to that – the central cast of The Day Today now seems somewhat like the historical curiosity of Hitler, Trotsky, Tito, Freud and Stalin all living in the same neighbourhood of Vienna in 1913. All are now blue-chip actors and creators in their own right – in particular Steve Coogan, whose bumbling sports editor Alan Partridge has since become a beast of his own and is credited as one of Britain’s most beloved comedy creations. On the writing staff was frequent Morris collaborator Armando Iannucci, the man behind The Thick Of It, Veep, and The Death Of Stalin, with future Father Ted creators Graham Linehan and Arthur Matthews also contributing – and Linehan cameoing on the grotesque youth advice skit ‘Sorted’.

It’s perhaps naive to talk about how well a programme has held up if people are, quarter of a century on, still gushing about it – although a news spoof, more than most, runs the risk of inadvertently becoming a time capsule. But while the names are all distinctly of the end-of-history ‘90s, the satire remains as on-point as it was in 1994. In fact, some of it’s worryingly close to reality – economics correspondent Peter O’Hanraha-hanrahan’s farcical interview with the minister for ships is starkly reminiscent of one of the most recent Brexit-related tangles, when it emerged that the British government had awarded a shipping freight contract to a company which owned no ships and had never run a ferry service.

But the world has, inescapably, moved on. When Brexit struck, Charlie Brooker – now best known for Black Mirror, but who had collaborated with Morris on the Brass Eye Paedogeddon special and Nathan Barley – emailed the old maestro suggesting Brexit was potential fodder for a Brass Eye revival. Morris’s response was that ‘the problem is it requires a form of authority to subvert for it to work, without that new tools are required’ – and this idea of a lack of any form of authority does seem to strike at the heart of the West’s current status quo. Sure, we still have heads of state, but they feel increasingly like crumbling strongman bosses of rump governments besieged by rebels, lacking only the artillery fire creeping perilously closer to their headquarters.

By contrast, in the early ‘90s John Major actually came under mortar attack, with a shell landing in the back garden of 10 Downing Street during a cabinet meeting. The fact this is rarely commented upon is usually trotted out as a mark of how boring Major was as a figure, but is more indicative of how we used to view terrorism (the turning point obviously being 9/11) – the occasional rock hurled through the window of the established authority, which, after all, wasn’t going anywhere.

True to form, The Day Today had its poke at Irish republican terrorism – mocking the BBC’s policy of dubbing over Sinn Féin politicians by having their Gerry Adams-alike ‘inhale helium to subtract credibility from his statements’, and seconds later declared the cessation of hostilities because all the parties involved ‘had a meeting and have sorted everything out’, which turned out to be a fairly accurate prediction of 1997’s Good Friday Agreement. So yes, between Major and Adams we certainly did have a form of authority back then. But, to put this delicately, as emperors they weren’t as fully dressed as we perhaps remember.

Speaking of emperors with no clothes, there will doubtless be those who also number among The Day Today’s predictions the era of fake news – but at the risk of betraying the magic circle, this didn’t spring into existence when Hillary Clinton and Donald Trump started slinging the term back and forth in lieu of policies. As long as there’s been journalism, there’s been the yellow kind alongside it, offering up long-lens shots of celebrities and the sentence ‘if true, this means…’. This isn’t all – or, likely, even mostly – of malevolent intent, but rather a product of perverse incentives, like the need to fill a headline with whatever will draw the most eyeballs. The Day Today may have been fiction, but the underlying corpuscular dynamics were all too real.

And so it is that, just as the past month has seen many column inches and gallons of ink splashed over people’s furious opinions about an advert for razors, Morris’s crocodile-snapping, Paxmanesque interrogation of a subject almost tailor-made for the ‘on a lighter note’ section’ doesn’t quite seem outside the realms of possibility.

Authorities come and go, but the news is forever.