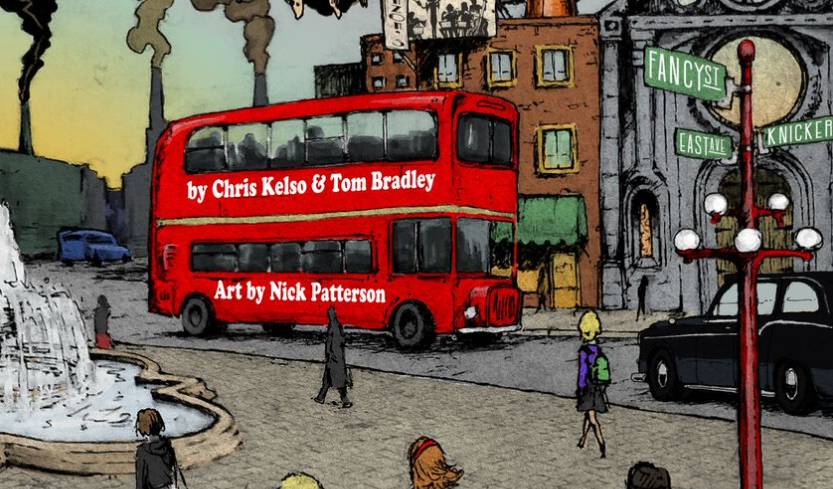 ’A hungry man is an angry man. A hungry journalist is a dangerous person.’

‘Well I guess I’m not a journalist anymore. Time to apply for a job at The Guardian.’

The Church of Latter-Day Eugenics certainly fits under the genre of Bizarro. It sets itself up as a murder mystery, but quickly takes a left turn into a much stranger plot. Throughout the story, it throws satirical barbs at the news establishment, gender politics, and religion. The novella also includes excellent artwork by Nick Patterson. Like the story itself, the art is a mixture of funny, disturbing, and weird.

The character of Fulton makes it clear that Kelso and Bradley don’t think much of people in the journalist profession, especially tabloid writers. Fulton happily writes hatchet jobs for his paper with little regard for his target. At one point, he recounts a hit piece he wrote on the Mormons in England, exaggerating the rituals he witnessed to an absurd and slanderous degree. He finds himself more put off by the changes in his writing to fit the paper’s style guide than he does the lies he allowed to be printed.

The novella takes place in modern day but its plot revolves around ideas prominent in the 19th Century. As the title suggests, those ideas are Mormonism and eugenics. In Mormonism (to my understanding), it’s believed that when the chosen people die, they become gods of their own planets. This novella plays with that idea by having one of Brigham Young’s wives, named Sheila, return to Earth as a goddess seeking to purge humanity of the weak and unworthy. Her devotees willingly make themselves eunuchs and take the semen and menses of others they deem weak to burn to please Sheila.

The book uses the eugenics concept to mock the modern debates around gender politics. Fulton, despite his lack of scruples, is a fuddy-duddy Tory who derides what he views as the feminization of modern men. At one point, he and Cheryl butt heads with a campus activist nicknamed Nicoleaky, who is constantly protesting one thing or another. Neither of them come off well or end up on top. To his horror, Fulton becomes more effeminate as he falls deeper into the Sheila worshiping cult and Nicoleaky becomes a target of the cult.

My biggest criticism of the book is that its short length doesn’t serve the story as well as it could. “I wish it was longer” is usually a non-criticism, but in this case, it fits. When the book ended, it seemed like there was much more to explore in the Mormon cosmology presented and in how the cult spreads. I hope one or both authors return to this concept in the future.

Verdict
The Church of Latter-Day Eugenics is a well done satirical Bizarro novella with an odd story and great artwork. It doesn’t develop the story to what I saw as its full potential, but it’s still well worth reading. Fans of Bizarro should especially pick this up. Review copy provided
7.5
Cultured Vultures is a pop culture website established in 2013 covering all things gaming, movies, and more. We eat your words.
All The News On The Biggest Games