With great power, comes a great publicist and a 401k. 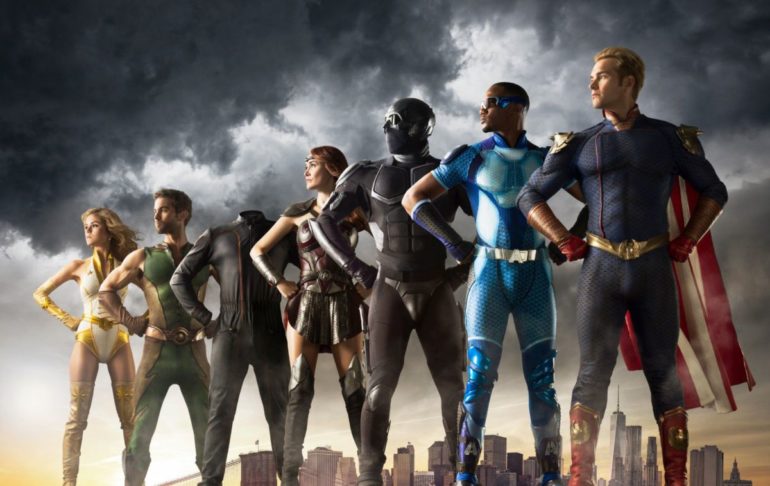 The superhero genre is a booming business. It has been for some time. So much so that the biggest box office movie in history is now a superhero film, if you don’t adjust for inflation. Capes, chest symbols, and alter egos defying gravity promise hours of entertainment value that brings most childhood imaginations to fruition. It’s also the opportunity to cope with the human condition in 3-D and IMAX. Heroes have always been seen as selfless creatures of habit, rushing in at a moment’s notice to be a beacon of light to a darkened world.

But if movies like Spawn, Watchmen, Kick-Ass, and Deadpool taught us anything, it was that the world actually didn’t mind seeing themselves in a superpowered person that didn’t pour a cup of hope every morning for breakfast. Antihero cinema gave us a reason to embrace imperfection, appreciate the little guy, and namely justify the choices that led to gratuitous violence. Because why do villains get to have all the fun?

Enter Amazon’s The Boys – a grisly, morally questionable anti-superhero dramedy about what happens when superpower corrupts absolutely and wears the face of truth and justice in front of the camera. It’s a twisted tale about corporate greed, handling loss, and exacting vengeance in the most vulgar way possible. It’s adapted from Garth Ennis and Darick Robertson’s comic book of the same name and co-created by Eric Kripke, Seth Rogen, and Evan Goldberg. This is the second comic book adaptation from Ennis for Rogen and Goldberg. They also developed AMC’s Preacher, the critically-praised and gloriously obscene drama that set the bar for The Boys. Preacher is entering its fourth and final season in just a couple weeks.

The story takes place in an alternate universe very similar to our Earth, but in this world, every city (that can afford it) gets a “super-abled” hero sold to them by an American corporation called Vought. The business has little regard for anything that does not increase their status and bottom line. This would include collateral damage any of their employees may cause. Such is the case with the main character and Billie Joel stan, Hughie Campbell (Jack Quaid), who lost his girlfriend Robin (Jess Salgueiro) to the speed of the hero A-Train (Jessie Usher) when he ran past them. He ran into her so hard, that he would later recall accidentally swallowing a few of her molars. Vought’s manipulative Senior VP of Hero Operations Madelyn Stillwell (Elizabeth Shue) forces A-Train to give a passive “thoughts and prayers” apology on TV, which was met with disgust from the bereaved Hughie.

This event is what leads Hughie to his second life-altering event in a week – meeting The Boys lead vigilante, Billy Butcher (Karl Urban). Butcher is a man hell-bent on destroying all “Supes” for what happened to his wife. He enlists Hughie’s desire for revenge to round the old band back together and destroy Vought’s most prized possession and face of their campaign – The Seven. These are a group of seven hand-picked, paragon heroes that serve as a sort of Justice League for the world to worship and rely on. And despite being a show called The Boys, it was more an in-depth study on The Seven. Well, in-depth for most of them. The Vought corporation’s perpetual employees of the month are:

Homelander (Anthony Starr): The leader. An entitled blonde-haired, blue-eyed Captain American super man with the stars and stripes draped down his back. He is practically touted as the second coming of Christ to the people; a narcissist with a twisted oedipal complex.

Queen Maeve (Dominique McElligott): The warrior princess who slowly compromised her ideals because the spotlight was too distracting. She was a woman whose voice and body was taken so far away from her, she lost her way back and eventually saw no point in looking. On again, off again alcoholic.

The Deep (Chace Crawford): The Aquaman of the group who wishes he was actually Aquaman. He is the embodiment of insecurity. He’s the annoying, insignificant friend who rides the coattails of the popular kid who lets him tag along.

Starlight (Erin Moriarty): Christian by force, living a life destined for greatness from God according to her mother. She’s the bright-eyed, naive one who gets a wakeup call on her first day in the real world and through some strategic rebellion, navigates it and her naivete surprisingly well.

A-Train (Jessie Usher): A cocky, one-trick pony speedster who spends his time trying to not let the sun set on his popularity by any means necessary. If Maeve was just distracted by the spotlight, then A-Train was completely blinded and pressured by it. He’s all about the views and doing it for the ‘gram.

Black Noir (Nathan Mitchell): Little is known about the Snake Eyes of the group. He’s a quiet type, who lets his actions do all the talking. The greatest piece of character development he had the entire season is that he plays the piano. That’s it. Aside from that, it’s fun to note that “noir” is french for black, making his name Black Black. But seriously, this was the most forgotten character in the season, which made it disappointing watching such a great costume seem to go to waste.

Translucent (Alex Hassell): He has a special carbon skin that can render him nigh invulnerable. It also gives him the power of complete invisibility when he’s naked. He’s the perve of the group with issues respecting other people’s boundaries and staying out of bathrooms.

There doesn’t end up being much to the story in The Boys. You’ve seen most of it before. Instead, it decides to focus its over-the-top energy on being the antithesis to all of your typical superhero tropes. This isn’t a truth, justice, and the American way story. This is a greed, narcissism, and my way or the highway story. It’s a show where the evil version of every hero and vigilante is who they see in the mirror. You won’t find a damsel in distress or anyone motivated in a training montage by dead family members. And secret identities aren’t even much of a thing.

In fact, to some degree, it becomes near-disturbing that you never see The Seven outside of their costumes. This, ironically, is also a part of the dark comedy’s cartoonish charm and perversion. Heroes are losing their secret identity to the costume and the only one with the audacity to wear civilian clothes is Starlight. She’s not as immersed in the culture as her other co-workers. Her identity still relies on who she was before the spotlight, a conversation that hits a new peak when she’s offered a more revealing outfit because it would poll better.

The overall performance in The Boys remains consistent, with the strongest portrayals coming from Starr’s Homelander, Quaid’s Hughie, and Tomer Capon’s Frenchie. It’s Capon’s take on the French arms dealer that gives you enough moments of layering to his story to make you care about his actions just as much as the main cast. Karl Urban’s brooding and demanding Billy Butcher walked a thin line between annoying and garnering enough sympathy until he was annoying again.

For writer Garth Ennis, being allowed to express this kind of comic vision on Amazon has to a dream come true. The Boys get to look at what was allowed in his first show, Preacher, which features a sex scene with Jesus himself, and tries to one-up it by fully indulging in the more ratings-free zone it was given. You have your full-frontal male nudity. You have a widespread use of profanity, including a robust offering of the word “cunt”, thanks to Urban’s Butcher.

You want to see people exploded, lasered in half, or getting their heads crushed under immense pressure? Then let The Boys lay out the welcome mat for you. And these are all things that Preacher would have done, had it not been restricted by basic cable rules. On Amazon, most of those rules are thrown out of the window so they can ask what’s the worst thing that could accidentally happen to a kidnapped dolphin? Or better yet, how can we use a lab of drug-induced babies to our advantage in a firefight?

In between the body parts, dry humor and one-liners that don’t always stick the landing half the time, you get a “what if” superpowered drama that is more a breath of fresh air than anything else. And with a second season renewal already approved, it’s clear that Amazon wants to make their mark on the caped crusader trend before superhero fatigue truly takes root. If that ever becomes a thing. 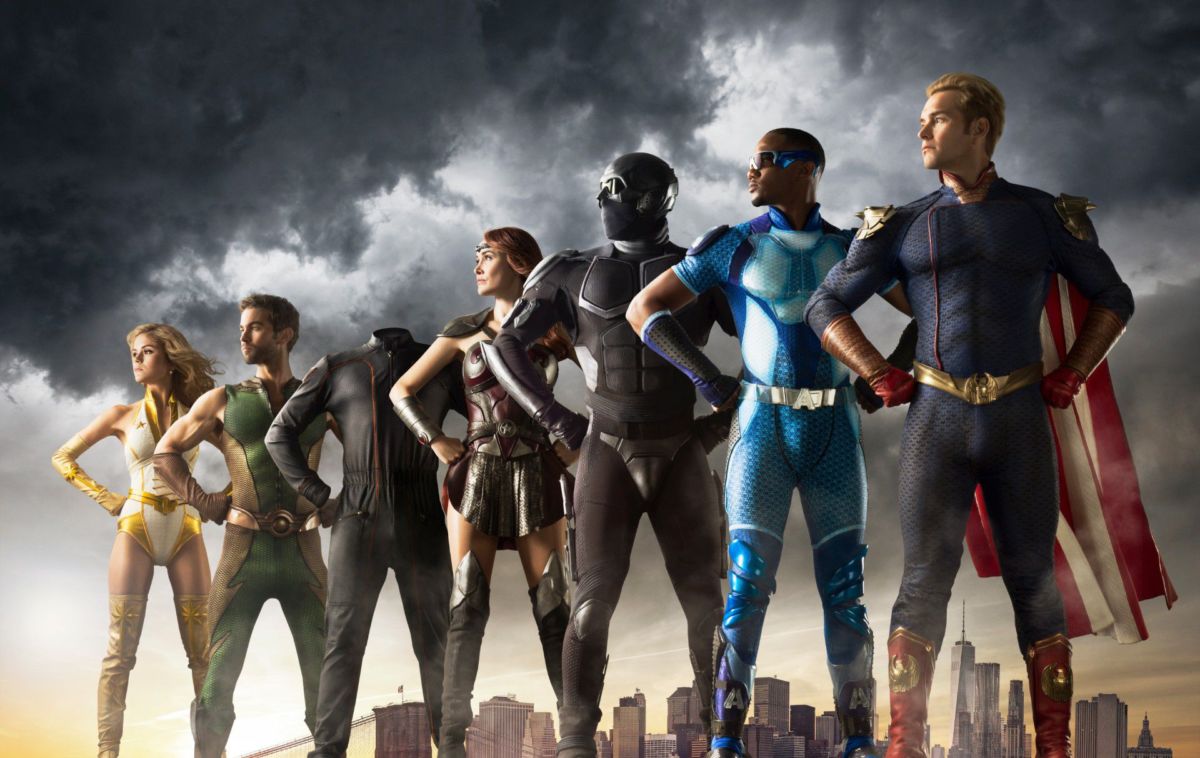 Verdict
While at times being a bit one-track minded, The Boys takes you on an obscene, violent, and sometimes comedic journey that explores what happens when the superheroes you admire on camera, are actually jerks behind it.
8
Cultured Vultures is a pop culture website established in 2013 covering all things gaming, movies, and more. We eat your words.
All The News On Your Favourite Games