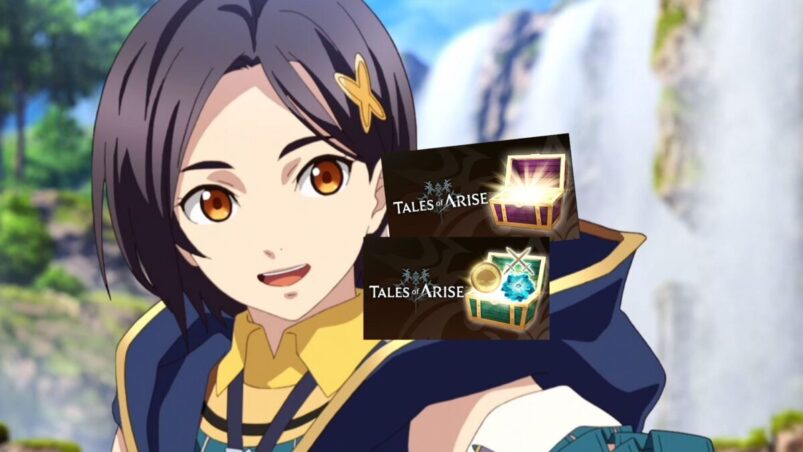 Available from September 10th, Tales of Arise features DLC and booster packs that affect general gameplay so much that they more or less break the game itself.

Tales of Arise has two different packs that offer in-game boosts to players who purchase the more expensive editions: the Premium Item Pack and Premium Travel Pack. We were provided 2x Ultimate Edition (RRP $109.99/£74.99) PlayStation keys for review and general coverage purposes which contained both packs, but didn’t redeem the game-changing content for the review playthrough itself.

The Deluxe Edition (RRP $84.99/£64.99) also contains both of these packs but not as many costumes, though even redeeming costumes can greatly alter gameplay in Tales of Arise.

Bandai Namco confirmed to us that the edition-specific DLC would also be sold separately.

On top of that, it also appears that booster packs will be sold separately at launch to allow players to speed up their progression.

Here’s a basic rundown of what’s in each DLC pack in Tales of Arise.

The Premium Item Pack for Tales of Arise includes 100,000 Gald, the in-game currency which would take dozens of hours of play to acquire naturally, 5 X Life Bottles to revive allies in combat, 10% off the General Store, which basically makes everything much cheaper, a 20% SP Boost, and a 20% EXP Boost to help you level up significantly faster.

The Premium Item Pack also comes with a lot of ingredients for cooking that would again require countless hours to acquire naturally.

The Tales of Arise Premium Travel Pack, meanwhile, contains a 50% reduction on the cost of crafting and enhancing accessories via an Engraver, a further 30% off the prices of items, double the effects of the recipes you cook that can give you a significant leg up, and SP that helps you to acquire new skills.

As well as all that, the Tales of Arise Premium Travel Pack also includes “Minimalist Weapon Forging” and “Minimalist Cooking,” though it’s not clear exactly what these do. We claimed them in-game to check and couldn’t immediately see any changes, but we expect that they reduce the costs of making weapons and the amount of ingredients required for cooking recipes.

We’ve also noticed two other booster packs sold as microtransactions that seem to be available separately to the contents of the more expensive editions, though we were unable to check their prices as they haven’t yet been added to the PlayStation Store.

The Tales of Arise Starter Pack comes with -20% CP cost, which means that you can be healed and revived for more than normal during combat, 100,000 Gald, 1000 SP to put towards skills, and, perhaps most significantly of all, a whole 5 free levels of character progression.

As well as all of the gameplay packs, Tales of Arise’s costume packs also come with SP bonuses that will speed up skill progression. On top of that, you can also unlock stronger exclusive weapons than normal with these more expensive editions, like the Protoblade Alma for Alphen. Some costumes also offer exclusives artes and unlocks in the Skill Panel, again giving you a gameplay advantage.

These microtransactions feel somewhat similar to Ubisoft’s Assassin Creed series, which introduced “time-savers” speed up XP and currency gains in its most recent RPG-centric entries. Also like Assassin’s Creed (and Shadow of War before it), Arise also features a late game that is somewhat grindy, meaning using such packs and boosters might become more of an attractive option for some.

While this kind of DLC isn’t new in Tales games with Tales of Berseria, Tales of Zestiria and Tales of Vesperia: Definitive Edition both offering DLC that changed the natural flow of the game, Tales of Arise’s DLC feels like the most comprehensively game-breaking and broad in scope to date, almost to the point of the game playing itself.

As our review suggests: “If players are so interested in Tales of Arise that they want to buy an Ultimate Edition or give extra money for DLC, why pay real cash for something that will make it go by more quickly?”

READ NEXT: The Dark Pictures: House of Ashes Offers Familiar Frights So Far