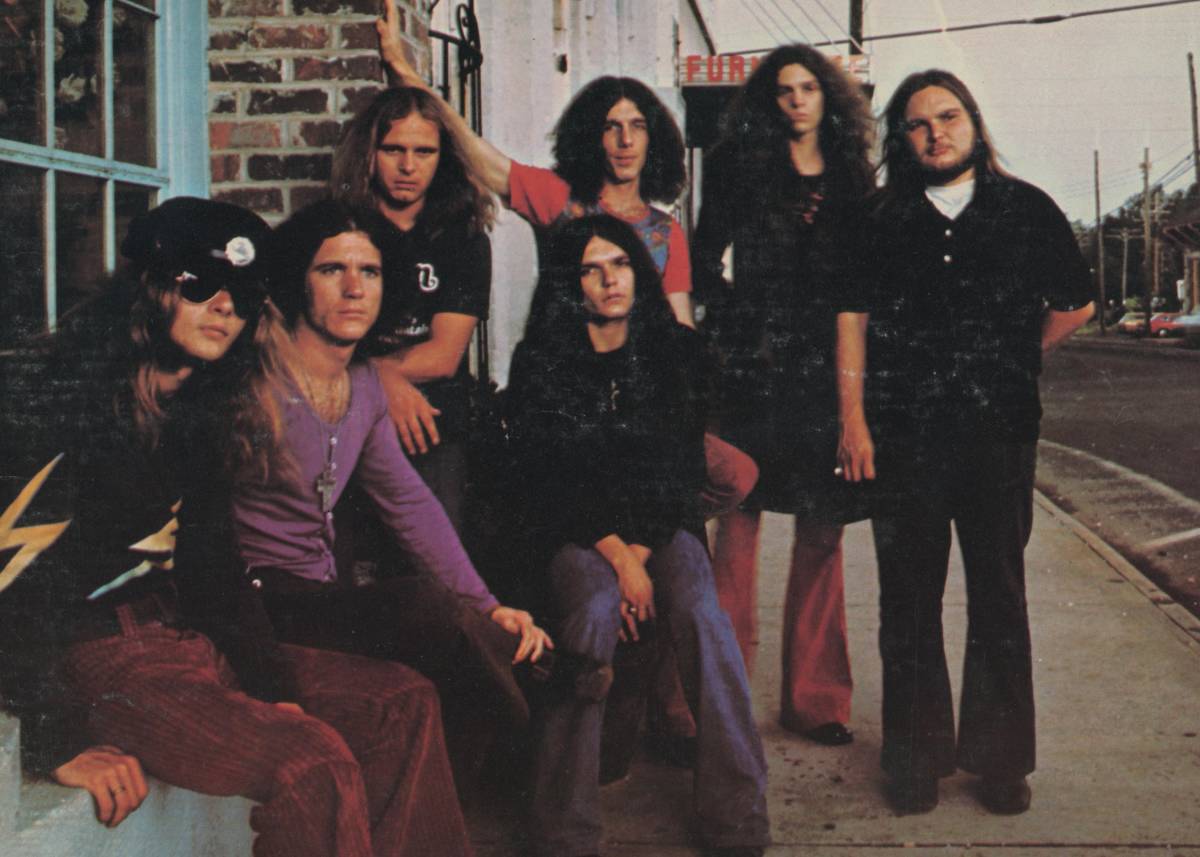 Director Stephen Kijak and Lynyrd Skynyrd band members Johnny Van Zant and Gary Rossington were on hand to discuss the new documentary, If I Leave Here Tomorrow: A Film About Lynyrd Skynyrd, during the 2018 SXSW Film Festival.

How much of thrill is it to be here for the documentary at SXSW?
Stephen Kijak: This is my fifth movie I brought to SXSW. It never gets old. It’s the first time we world premiered here. It’s always nice bringing a music film here. We’re in the sweet spot between the film and music festivals. We’re really excited. I love the movie. I can’t wait to show it to people and see how they react. I think it’s going to be a great night.

Johnny Van Zant: Stephen did a great job capturing what the band’s about. Gary got to tell his story in this, which meant a lot to us. Brian Phillips of CMT brought it to us and mentioned Stephen.

Stephen Kijak: It was like a commission from CMT. It wasn’t something I developed but was a story that’s always kind of been in my imagination. A good old friend of mine from Georgia would not stop talking to me about telling me I should do the Skynyrd film. It’s been ten years of, “Have you done it yet?!” It’s the ultimate American rock legend that hasn’t been fully given its due in film, which is amazing that it has taken this long. When we started to develop it, you realize what a cool exciting canvas there is to play with. The history, the stories about not just the people in the band, but the place, Jacksonville, Fla. The American south that gave birth to so much great American rock. I do rock docs. It’s kind of my pocket. I’m always finding there’s some new way into the story. There’s always something to discover and a way to tell it. This was really inspirational, meeting these guys. It’s an honor, really.

Johnny Van Zant: And he survived it!

Does it feel special in knowing the movie is premiering in the same year as the last tour?
Gary Rossington: Well, we announced that and we’re going to that but we’re never going to quit. We’re going to play special things and keep going. We’re just not going to tour and tour all year every year and all during the times. This is something to tell the story and then saying it’s the farewell tour, it kind of all comes together. You know the story, you’ve seen it, you’ve heard why it’s happening. It’s because of the music and what we’re doing with music. The farewell thing—

Gary Rossington: It’s hard to say quit. Musicians don’t quit. I’m not a quitter in anything. I always try to do it no matter what so we’ll see.

Stephen Kijak: The film, there’s a retrospective/legacy vibe to it but I think it opens the door for that legacy and inspiration to keep going. What we wanted to do was make all that past feel really present again. It is still present when they’re on stage playing those songs. There’s a lot of the audience that might not know that history so we’re bring that back to life for people.

Johnny Van Zant: It’s very true. That’s especially true for younger generations. We get kids all the time coming in—their parents or grandmother turned them onto it. They’re young kids. They don’t know the history. A lot of them think I was the original singer! I’m like, no, no, no, Ronnie was the original singer! To be able to have a doc like this and a film about this teaches them the history of Skynyrd.

Stephen Kijak: I thought of an answer to a question that other guy had: what things didn’t we put in it? There are things that you cut out. When we were at the end of the film, there was a bit that you tell us about where some kid came up to you at a concert and went “my great-great-great grandmother loved you guys!” (Laughs) How many greats was that? What are you talking about? It just shows you what band today can say that.

Johnny Van Zant: If I could speak on the farewell thing, you never say—I guess you have to call it something but we wanted to go out on top and not have our maybe health or something happen to us where we’re not as good as we can be. One thing I can say —I’ve been in a band 31 years— every time we went out on stage, we try to take people away from their problems, take us away from our problems, and just play great Lynyrd Skynyrd.

Gary Rossington: Unfortunately, I have health problems with my heart and stuff so that’s one of the big reasons why I can’t tour a lot anymore. We’re going to still keep going. I don’t know. It’s weird for me to even talk about it now that we’ve said it. I kind of want to take it back. (Laughs)

Is there a moment in the film that hits you the hardest emotionally?
Gary Rossington: I was asked that already and yeah, there’s a few of them. I never saw on any documentary or film—we never got to how tight we were as people or friends and family and buddies. When I see us looking at each other or you hear certain songs and see Steve Gaines, it just gets real emotional for me. I like that part of it – it makes me remember a lot of things that happened and why. We just wrote about our lives and it was right there in front of you. It was pretty cool to see. I never had a chance to look at the story. I was always living it and doing it so it’s kind of cool when you do that.

Johnny Van Zant: Anytime I see anything with the crash or anything like that, it affects me and you go back to 1977. I knew Bob Burns. I knew Larry Junstrom. Ronnie was my brother. When you look at those kinds of things and see them talking, it brings back emotions but that’s what it is and I’m glad the story was told this way and not in a negative way because there’s been so many documentaries–we were saying earlier that there’s been some out there where I didn’t know the damn people in the documentary. I’m like, who are these people? Everybody’s talking about Lynyrd Skynyrd. It’s good to see it this way.

I found it interesting that the Lynyrd Skynyrd documentary and the Neil Young film were both premiering at SXSW.
Gary Rossington: We meant that. (Laughs). I didn’t know that. That’s kind of cool. Just to be associated with him is great to me.

Stephen Kijak: As you can see, I’m wearing a replica of the famous shirt that Ronnie Van Zant wore on stage every night.

Gary Rossington: He was one of our favorites and Ronnie was a great songwriter. The reason why he listened to Merle Haggard, Neil Young, and the best lyricists ever —Neil Young was one of them, of course— all his songs were so heavy and great.

Johnny Van Zant: Is this like a documentary on him?

Stephen Kijak: Him and Daryl Hannah made some kind of experimental film. I think it’s about music or musicians. We tried to see if he wanted to be in the movie and tell his side of it all but he doesn’t like doing interviews and things like that.

Johnny Van Zant: What did you say it was about?

Stephen Kijak: I’d have to look it up because it just seems like experimental something or other with Daryl, Neil and other musicians.

What was the most surprising thing you learned about the band in making the documentary?
Stephen Kijak: I think the bloodbath in Hamburg is the story that everybody goes like, holy shit! That Ronnie could get drunk, smash a bottle, cut up Gary’s hands just because they’re fighting, hug like brothers, and go on stage the next day with bleeding bandages. The headline we dug out says BLOODBATH IN HAMBURG but the subtitle is like, when a band starts slashing each others’ wrist before a gig, you know they’re confident.

Johnny Van Zant: Gary kind of got Ronnie back. He broke my finger. (Laughs)

Gary Rossington: We would fight all the time, too!

Johnny Van Zant: I know. I was trying to break him and Billy up one time, too. This finger went all the way back. I don’t have any knuckles.

Stephen Kijak: It was the extremes, they lived these amazing extremes. You can go that far out and get that wild and violent. What you see on the other side of the extreme is brotherhood, friendship and enduring bond. They were unlike any band. If you look at any band’s history, even the Stones don’t have that tight of original bond going back to when they were teenagers. All that is extraordinary, really.

Johnny Van Zant: All that was due to liquor, though. Anytime that there was liquor involved, we’d all fight. Me and Gary fought over it. Stupid shit. One thing we can say, if anybody would mess with us, we’d be on them together. Ronnie was the type of guy that if he loved you, he loved you.

Gary Rossington: More than anything.

Johnny Van Zant: He’d give you the shirt off his back anytime. A couple drinks, and you’d say something to him that he didn’t agree with. (Laughs)

Gary Rossington: Where it really comes from is our dream was coming true. We were making it. We were overseas and just in our early 20s. I think I was 21 or 22 on tour with The Who. Then Germany in Europe. We were going, God! If we did get in a fire, something bad happened. The next day, it didn’t. We went about our business, our dream was happening. You’re not going to stop just because you got in a fight. I guess Southern guys back in the old days, people used to fight more and then get it out and make up instead of guns or knives or put on social media, “someone beat me up today.”

Congrats on the film and thank you for your time.
Stephen Kijak: Thank you.

Johnny Van Zant: Thank you very much. I appreciate it.

If I Leave Here Tomorrow: A Film About Lynyrd Skynyrd held its world premiere at the 2018 SXSW Film Festival. It will air on CMT at a later date.