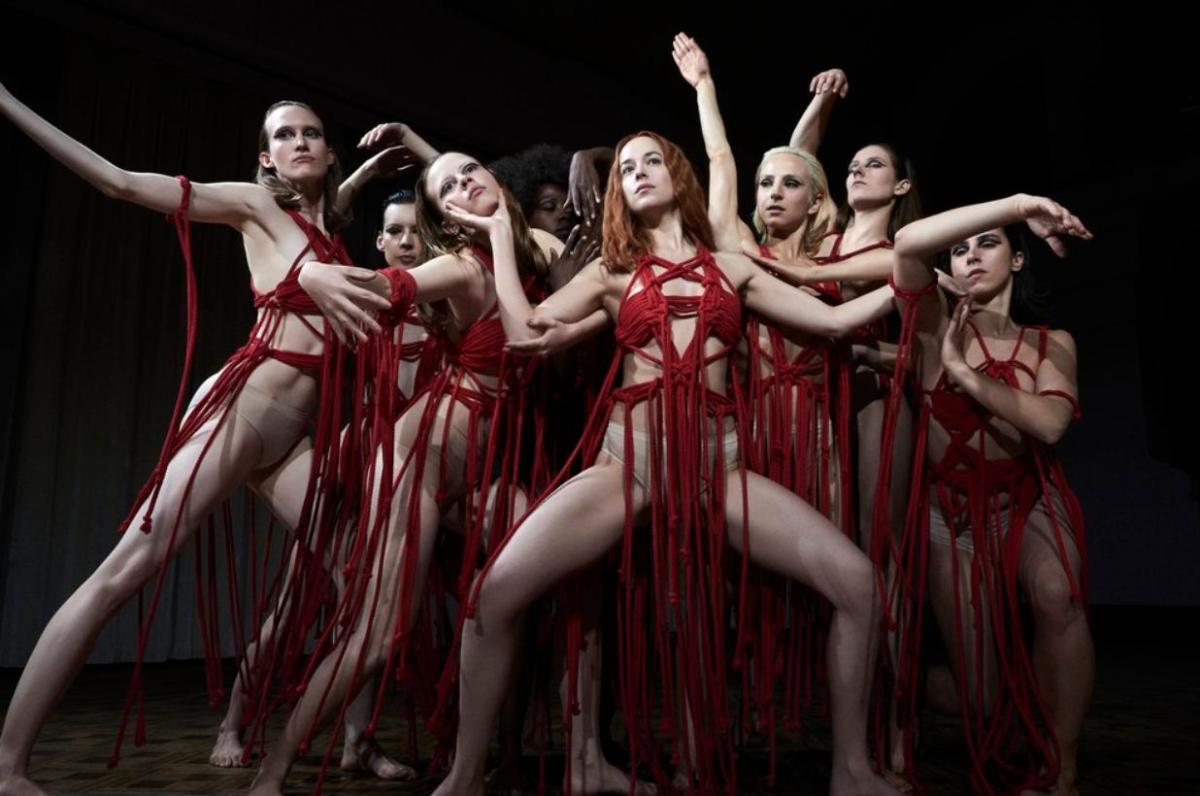 If you were to look at Luca Guadagnino’s previous film, Call Me By Your Name, and tell me that within a year he would release Suspiria, I would call you mad. There is such a vast contrast in style, emotion and themes between these two films that it comes as a shock to see that they are from the same director. While Call Me By Your Name is all about sweet and tender moments, Suspiria has its focus on the shocking and violent images. Filled with quick cut montages of horrifying visuals, Guadagnino has created a masterpiece of haunting imagery which is sure to cause a great divide amongst viewers.

In Germany in 1977, Susie Bannion (Dakota Johnson) has travelled to Berlin with the hopes of becoming a dancer for the Markos Dance Academy. With the recent disappearance of a student, there is an open spot for Susie to join and she is able to begin a journey under the tutelage of Madame Blanc (Tilda Swinton). Meanwhile, Dr. Jozef Klemperer (Lutz Ebersdorf) begins to suspect something is darker afoot at the academy after the sudden disappearance of Patricia Hingle (Chloë Grace Moretz). The two stories frequently crossover between the training of Susie to take on her first dance with the academy and Dr. Klemperer’s attempts to discover more about Patricia’s disappearance, leaving a wonderful mystery to unfold before us.

From the release of the first trailer, Suspiria promised to be a film which left you with more questions than answers and it’s safe to say that this was well achieved. While the plot is simple to follow, the audience is expected to do a lot of heavy lifting when it comes to coming to terms with what we witness on screen. Not all the answers are spoon-fed to us but with a film filled with so many unique stylistic choices, it would be a great disservice if all elements were explained. In a number of dream sequences that Susie experiences we are shown flashes of violent imagery, creating a great sense of instability. With our grip on reality being tested at every turn, you can be left feeling lost at times as you try to figure what is real and imagined for Susie. Pairing these images with a soundtrack from Radiohead singer Thom Yorke, his first solo film score, and you are taken on a ride through which multiple senses are assaulted but constantly left wanting to experience more.

While the camera would often linger on scenes within Guadagnino’s Call Me By Your Name taking in the beautiful surroundings, Suspiria is obsessed with showing us the smaller details. When we are treated to a new chapter of the story, we are shown a flurry of close up shots, sometimes of dancers’ limbs and sometimes of the various trinkets that help give character to the rooms of the dance academy. With a runtime that is nearly an hour longer than the original 1977 version, no time is wasted as we are shown great detail that help to make the audience feel fully immersed in to the environment. With the colours throughout the film being muted, the feeling of dread and despair seeps in to every frame. With the only glimmer of colour being that of Susie’s red hair, we are left hypnotised by her presence whenever she is on screen.

It is, however, not just her hair which helps Susie to stand out. In her second collaboration with Guadagnino (A Bigger Splash being the first), Dakota Johnson has shown she is a stronger actress than a lot would have assumed having possibly only seen her work in the Fifty Shades franchise. Her screen presence is hypnotic at times and when she dances we are able to see the extent to which she has control of her body. Every twist, turn and jump feels so calculated and with the determination that any real life dancer would strive for. Johnson shows incredible range which sees her put through a whirlpool of emotions and with Tilda Swinton putting in an expectedly powerful performance as Madame Blanc, we are provided one of the most dynamic student-teacher couplings seen in recent years. Mia Goth also deserves some recognition as Sara, a fellow dancer who becomes stuck in between Susie’s battle to make an impression at the academy and Dr Klemperer’s search for the missing Patricia. While Susie is determined throughout, the gentle nature of Sara is what sat with me most when the film finished.

While Swinton starring as Madame Blanc proves to be a powerful performance as she shows the regality of a queen, the choice to have her perform as actor Lutz Ebersdorf playing the role of Dr. Jozef Klemperer does not sit quite as strongly for me. In heavy prosthetic makeup but still recognisable as Swinton, we are given a sub-plot which doesn’t have the same visual impact. While the connecting threads do come together smartly towards the end, there is always a desire to spend more time at the dance academy with Madame Blanc and Susie. I am curious how having another actor take the role of Dr. Klemperer would potentially impact my enjoyment of the role as it proved to be more of a distraction than a benefit to the story.

Suspiria is a film which is going to divide a lot of viewers. Some will find small moments of horror which will haunt them to their bones. Others may find it too unfocused for it to have an impact on them. As a cinematic experience though, I haven’t come across another film like this. With frantic editing and camera movements which put you in the middle of the dance, Suspiria has become implanted in my mind. It tiptoes along so many lines, blurring genres but always remains riveting. The elements of mystery and mysticism run smoothly with the artistic touches Guadagnino has implemented expertly throughout, leaving a film designed to shock and repulse audiences but one that will instead pull you in, desiring one more look.