Sunny Family Cult – A Bold Step For The Smaller Screen 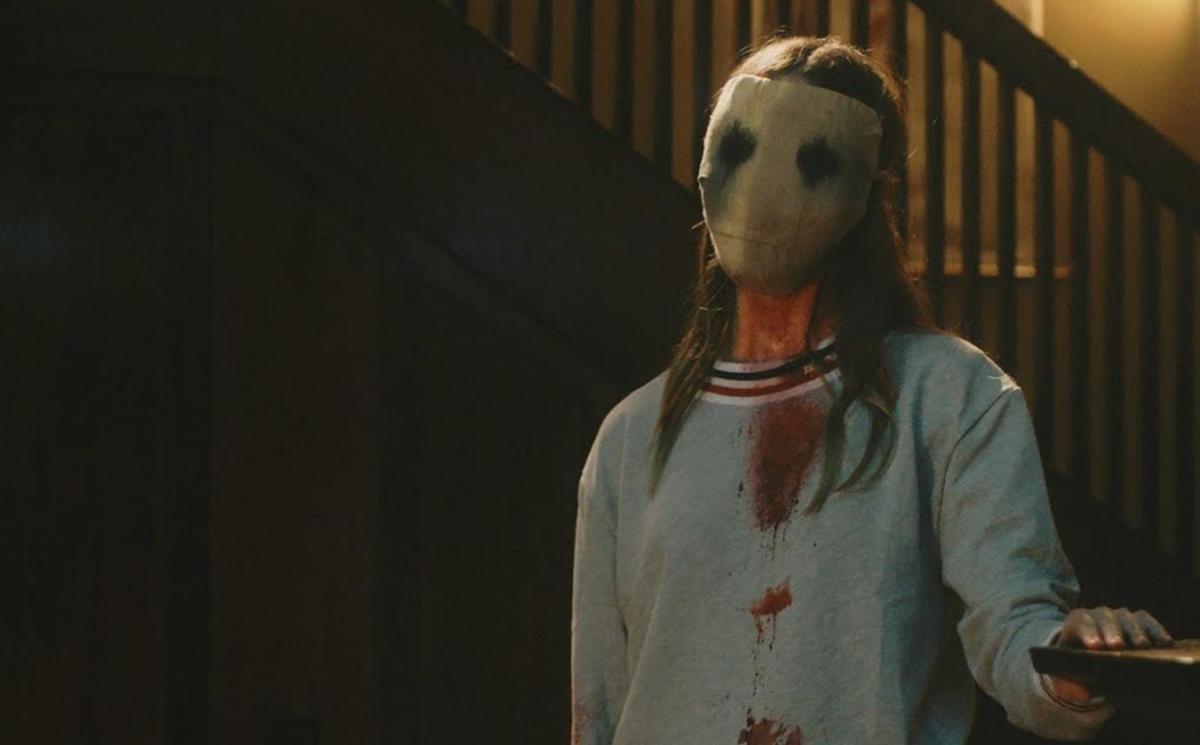 As the shift from old to new is becoming ever apparent in the realm of media, so too is the idea of what constitutes a “show.” With platforms such as Netflix, Hulu, and Amazon Prime, it was only a matter of time before YouTube would begin making their own original content in the form of YouTube Premium (formerly YouTube Red). So far, however, their original shows seem to fall flat with a formulaic, uninspiring lack of substance. This doesn’t mean, though, that the creators on their site have been falling to the same fate. As we see the executives of YouTube trying desperately to recreate traditional television, they have completely forgotten the reason people began watching more online media in the first place. And, as a result, YouTube will continue to miss some of the true innovators on their own platform. CryptTV is one of these.

With 1.2 million subscribers, CryptTV is quickly becoming a prominent channel on YouTube and it’s easy to see why. Dedicated to creating and featuring short, independently made horror films and series, the channel stands out among others for its uniqueness. All of their short films tend to be unbelievably well made. Each one is decently acted, with amazing special effects and gorgeous cinematography. By keeping the films short, most no longer than five minutes, CryptTV is able to keep the costs low and the quality high. From this strategy, we are treated to several horror series created by the channel, one of the most popular being Sunny Family Cult.

With the first episode of the highly anticipated third season released on September 4th, CryptTV’s audience is filled to the brim with blood lust. Taking place in a small town in Middle America, Sunny Family Cult follows a murderous cult hell-bent on ridding the world of normalcy through chaos. This chaos is achieved through bloody, stabby means, each kill better than the last. 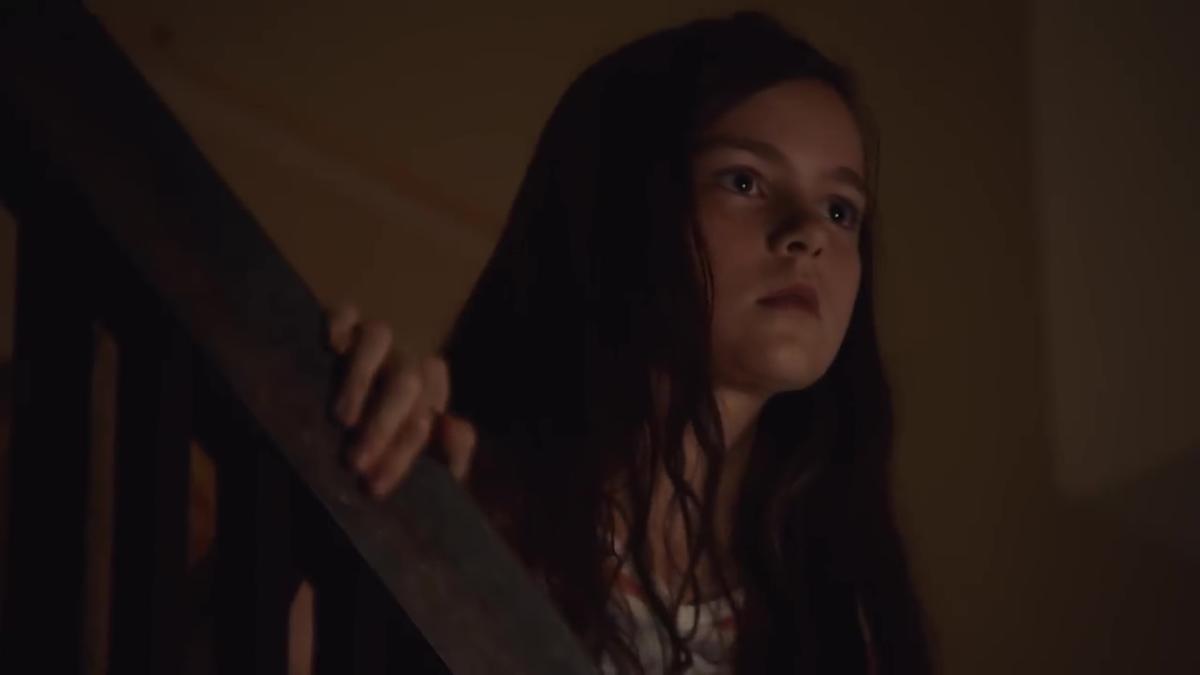 Taylor (Trew Mullen), a seventeen year old girl, and the only daughter of Elias, the cult’s leader, is our protagonist. We see her grow from a young girl, discovering the cult’s reprehensible doings, to her as an adolescent trying her best to impress her father with her killer instincts, to the present day, where she constantly vacillates between fighting her propensity for violence and giving into complete psychopathy. All the while, several of her peers become suspicious of the numerous disappearances in the town and set out to uncover the truth. As if that wasn’t enough, someone is killing random people, masquerading as a member of the cult.

In terms of performance, it varies by the scene. Given the budget, it’s impressive the amount of talent that resides within the show. Certain actors, however, tend to shine in certain episodes and not in others. The main character, Taylor, plays beautifully as a confused youth. Her performance is stilted and awkward at times, indicative of a person who has been sheltered from the outside world and kept from having normal interactions with others her own age, much like a cult member. As she interacts with a fellow classmate in school, her reactions and responses stand out as strange, as if she is trying way too hard to be normal.

It’s very subtle acting and works well – however, we don’t always see that performance. There are other moments, particularly when she’s in her bedroom, writing in her diary and pontificating on her life’s purpose, where Mullen’s presentation comes off as more annoying and contradicts her character’s personality. Understandably, the point was to create dark humor through the juxtaposition of a teenaged psychopath with the doubts that plague all youths. And it might have worked perhaps, had the writing been similar to other episodes.

The same can be said for the role of the cult leader and father of Taylor, Elias (Russell Cummings). His scenes have moments of intense, terrifying drama. You believe that he is a dangerous cult leader, someone who can be kind and charismatic. An engaging preacher one minute, an angry, manipulative Svengali the next. We see this in his power over Taylor, how she always wants to please him, and how he is able to manipulate her into doing what he wants her to do. 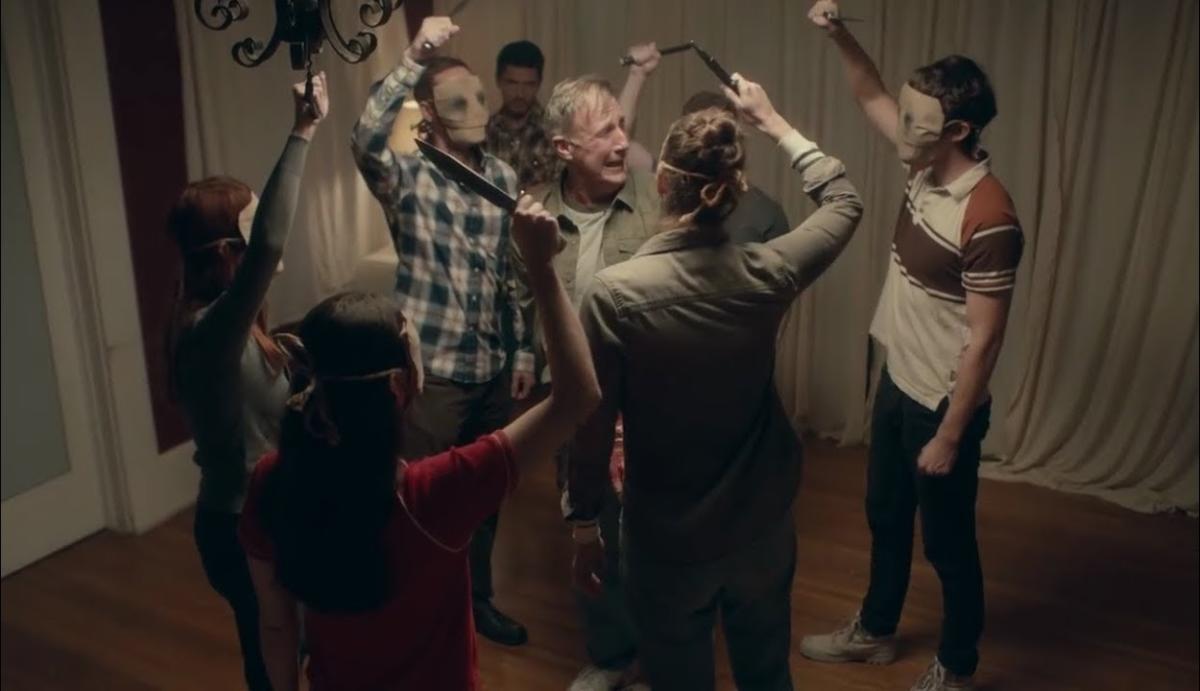 In one scene, an old man is shown standing within a circle of masked cult members with his hands tied. He tearfully states that this is not a family, but a “butcher shop.” All the while, Elias is pacing around, evangelizing about the importance of family and that the price for desertion is death, as the members proceed to stab the man to death. Following the passing, Elias is seen kneeling in the bloody aftermath, hugging his wife and claiming how much he hated to do it, but that it had to be done, as if this killing was burden that he was forced to bear.

Cummings’ constant conflict, from intense emotion to calm resignation, is wonderfully played and very fun to watch. As with Mullens’ performance, however, Cummings has scenes which tend to fall flat. Like scenes where Elias is arguing that his twelve-year old daughter should be allowed to participate in their killings, or when he shows disgust that a copycat killer killed a child, something the family would never do. Why? Why does Elias show morals in one scene and not in another? Again, I understand the idea of juxtaposition, but there are some things that just don’t make sense and it causes his acting to stand out as poor from the other scenes. That being said, I still believe that each episode contains mostly great acting, with only a few irritating scenes within.

Sunny Family Cult has a contradictory nature which makes for an enjoyable experience, but one that’s a little strange at times. After Taylor inflicts bloody torture on several of her classmates, she is then writing in her diary about being unsure of who she is and what she wants to do with her life; something a normal, teen aged girl would worry about. The characters determined to find out who is doing the killings are very unlikable, as opposed to Taylor and the dynamic between her and Elias.

They are murderers, yet you care about them and don’t want them to get caught. In another episode, we see Elias angrily yelling at Taylor, telling her that normal doesn’t exist in their family and that she had better find her killer disposition. Later on, he appears in her room, saying how much she reminds him of who he was at her age and how he’ll support her no matter her choices. Again, something we would see in a tender moment on a teen drama show.

It demonstrates that, while the writers are creating a full and intriguing backstory, they are self-aware enough to poke fun at the genre. Sunny Family Cult may be weird, but still refreshing and original. Without spoiling the cliff-hanger ending of their second season, suffice it to say that each plot line comes to fruition while leaving room for the story to flow effortlessly into the third season.

Like the sound of this? Check out Sunny Family Cult here.