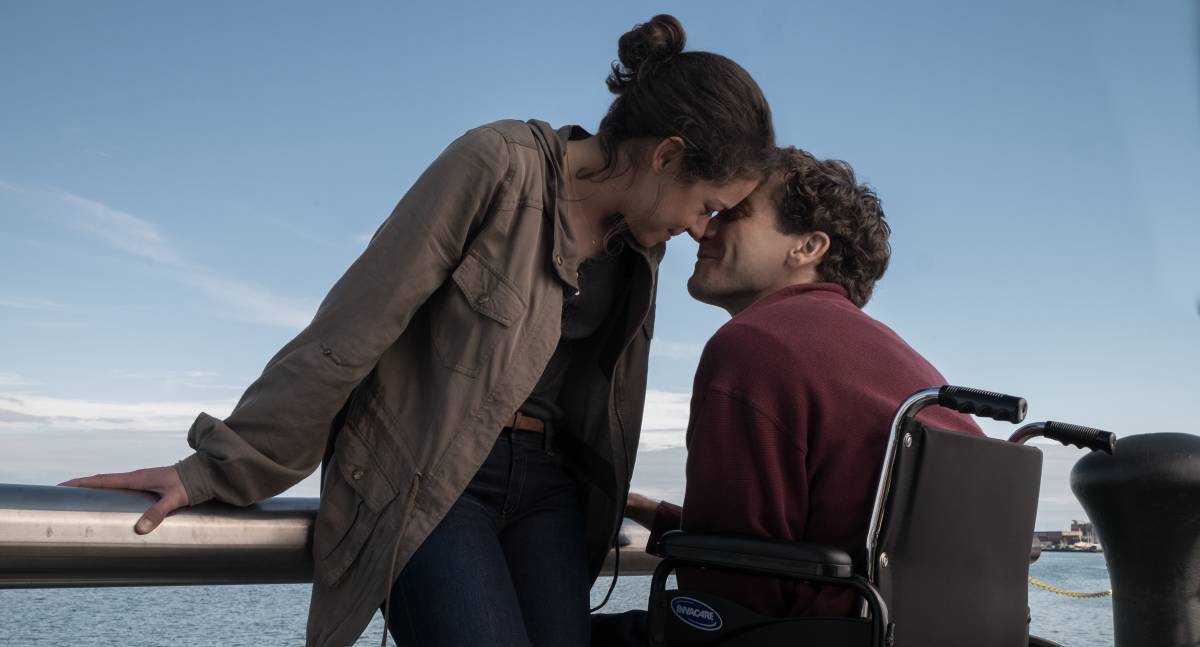 Jake Gyllenhaal and Tatiana Maslany both deliver top-notch performances in the inspirational Stronger as the film defines what it means to be Boston Strong. Where some biopics lean towards the melodramatic route, Stronger doesn’t and it’s all the better for it.

Nobody had heard of Jeff Bauman (Gyllenhaal) before April 2013. The 27-year-old Bostonian was just your typical nobody, working at the Costco deli counter, and hanging out at bars cheering on the Boston sports teams while dating Erin Hurley (Maslany) in an on-again, off-again relationship. Jeff decides to attend the Boston Marathon in hopes of getting his girlfriend back, but life had other plans for him. He was there at the finish line when one of the terrorists walked by him and in the moments that followed, Jeff ends up losing his legs and it’s a miracle that he survived.

Shortly after waking up and asked how he felt, Bauman writes down that he feels like “Lt. Dan,” an homage to Gary Sinise’s character who lost his legs in Forrest Gump. He tells his family to inform the FBI that he saw one of the bombers and can identify them–that story was seen earlier this year in Patriots Day, a gripping thriller taking place over the course of several suspenseful days in the Boston vicinity. If he wasn’t the one who identified one of the terrorists, maybe he’d have been just another victim of the blast.

One of the best directing decisions came as the bandages are being changed and having some of the real doctors and nurses, in addition to the Martino brothers who founded United Prosthetics, only helps add to the film’s authenticity. In this scene, Jeff is clearly in pain but we never see the camera focus on the bandages. Only his face as he looks at Erin for comfort.

The road to recovery isn’t easy for Jeff and the toll it takes on his family is bad. Even though we know his story, we don’t know what was happening behind the scenes. One can’t help but feel for him–after all, he’s one of those who truly represents what it means to be Boston Strong. It’s during his recovery period in which we see some of the strongest performances out of both Gyllenhaal and Maslany as Jeff and Erin struggle to keep their relationship intact.

Jeff could have given up and it feels that way at times, whether it’s getting out of bed or sitting on the toilet. He gets there, one day at a time, but it’s not an easy path. These scenes aren’t easy to watch at times but they are there to remind of us of the adversity that he faced after the blast.

There are some funny moments in there like the Boston police officer who pulls Jeff over when he’s sitting in the front seat and his buddies Sully (Richard Lane Jr.) and Big D (Nate Richman) are helping him drive. When the officer realizes that it’s Jeff Bauman, what does he do but ask for a photo with him? It seemed like such a cliche and didn’t feel like it was necessary.

On the performance side, Miranda Richardson disappears into her portrayal of Patty Joyce. Shedding her British accent for a Bostonian accent, the Oscar nominee portrays Bauman’s mother, an otherwise complicated woman, on screen. Richardson could very well find herself up for another Oscar nomination and could be facing her co-star, Tatiana Maslany, as competition. It’s not yet known whether Maslany will be campaigned for supporting or leading actress.

Screenwriter John Pollono could have gone the dark and depressing route to help tell Jeff Bauman’s story but much credit goes to him for mixing in both the tragedy and humor. The humor, it should be said, is what’s expected of Boston by now.

Lionsgate and Roadside Attractions will release Stronger in select theaters on September 22nd with a national roll-out to follow.