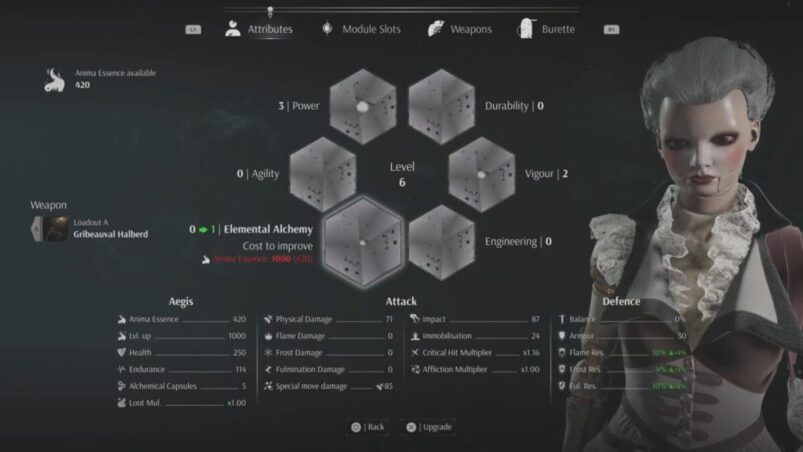 Steelrising by Spiders puts you into the body of a mysterious alchemical automaton named Aegis. In service of Queen Marie Antoinette, you will discover the secret behind a murderous army of clockwork robots that has taken over Paris. Though Elemental Alchemy is a central plot point to the story of Steelrising, it proves to be the most complex and difficult stat to build around in-game.

Building around Elemental Alchemy requires keeping track of stats both on and off your person, along with knowledge of what elemental afflictions are appropriate for different situations. This guide goes in-depth on how Elemental Alchemy works as a stat in Steelrising, as it is by far the most difficult to build around.

Elemental Alchemy is the stat that gives you the most bang for your buck in terms of point investment at Vestals found across Paris. You will get more Elemental attack power on whichever weapon that utilizes it in an attack, including one-use weapons such as grenades, even if you don’t have the gear equipped. It also comes with a 4% increased resistance to each element in the game with each point you put into it for defense. However, you won’t get any benefit to standard or special attacks that don’t have an elemental edge. This means you’ll either need to balance Aegis between Power and Agility, or lean into one to deal good damage without Elemental power for when you can’t charge it up or run out of Alchemical Capsules.

This means building around Elemental Alchemy might mean walking a tightrope between the two basic attack stats to make sure you always have the correct weapon for the occasion. You’ll also want to keep an eye on your Engineering stat, since it increases your Affliction Multiplier. Your Affliction Multiplier increases the effects and damage caused by your elemental debuffs that happen when you hit enemies with elemental damage, which isn’t explained anywhere in the game.

A fire debuff causes damage over time, the fulmination (electricity) debuff enhances damage taken while afflicted and the ice debuff freezes enemies solid. With a high Affliction Multiplier, these debuffs become deadly and make Elemental Alchemy a powerful destructive force that can stack up and absolutely obliterate boss encounters. You’ll want to make sure you’re not hitting an enemy with the same element that they use themselves, however, since it will take double the amount of hits to apply your own debuff on them.

Weapons you should use while building around Elemental Alchemy should cover something the other doesn’t. For example, the Fire Chain perfectly compliments the Charleville 1789 Shield Musket since one hits with fire and the other hits with ice. Elemental Alchemy weapons also need to use a special attack to charge up their elemental power in order to infuse attacks with it. It’s important to take note of these attacks since the vast majority are slow and make Aegis easy to hit. The biggest exception is the projectile weapons you find in the game, as they simply shoot the appropriate elemental damage.

There are a great deal of weapons you will find that you’ll want to experiment with while using an Elemental Alchemy build. Many of them are useful and can do tons of damage, how you do it just depends on whether your secondary focus is Power or Agility. Good agility weapon choices are the Frost Fans and Franklin Claws for an easy way to quickly get fulmination debuffs onto your foes in order to do massive damage any way you like, while the aforementioned combo of Fire Chain and Charleville Shield Musket focuses on freezing enemies before dishing out tons of burning damage.

Since the stat itself lacks in many different practical areas, Elemental Alchemy needs all the help it can get. To this end, all armor Aegis finds should seek to add to either her armor value or Endurance meter. You’ll want to equip Longevity modules for increased health, Endurance modules for a longer Endurance meter, and Efficient Ventilation modules to keep moving after depleting your Endurance meter.

Take note of what weapons you gravitate towards. If you gravitate toward Agility weapons, you’ll want to increase your Immobilisation stat using modules and if you’re using a lot of Power weapons, make sure you can increase your Impact stat. These are two important offensive stats for these respective builds and will in part determine how you go about combat (explanations of these stats can be found in their respective guides). You should also not neglect your Engineering stat, as it is the only way to increase your Affliction Multiplier.

Elemental Alchemy is the most difficult way to build Aegis in Steelrising. You will be constantly switching weapons, carefully investing your stat points and dealing with enemies in unique ways according to your elemental afflictions. However, building around Elemental Alchemy will allow you to take down bosses with ease once you understand how it all works. Though it has the harshest learning curve, Elemental Alchemy proves its worth as a very useful build for some of the toughest fights in the game.