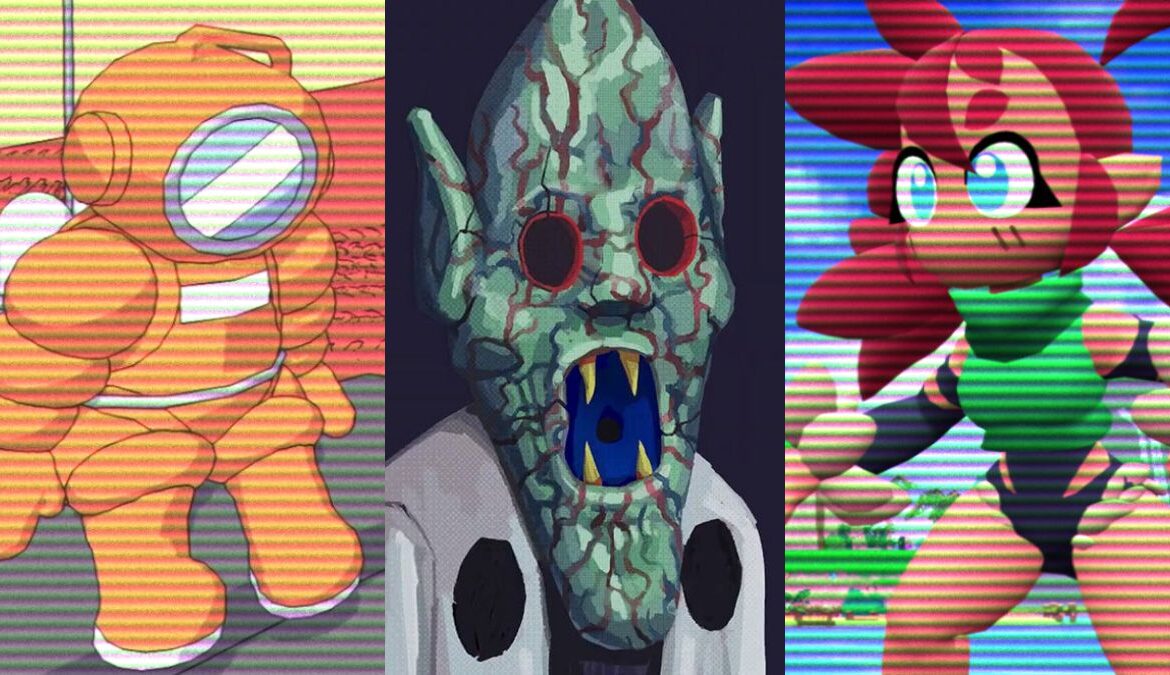 Steam is currently embroiled in another of its Next Fest events, showering players with a torrent of demos for upcoming games for a limited window of time. Game demos are a glorious thing – a completely free taste of countless new games – but when you’re standing before an ever-expanding buffet with hundreds of dishes before you, it can be a bit daunting. We’ve identified ten particularly sumptuous demos worth sampling, and worth keeping an eye for their full release. Check out these 10 demos during Steam Next Fest 2022 and get in on the ground floor of some incredible new PC games.

The Forest Quartet is a beautiful puzzle adventure game about a band (the titular quartet) after the death of its lead singer. You control her spirit as she navigates an ethereal forest and solves intuitive environmental puzzles, with haunting jazz music flowing the whole time.

What sticks out about The Forest Quartet is its incredible atmosphere. The almost stop motion-looking forest you move through is a really magical setting, full of entrancing lights and striking, peaceful quiet stretches. The puzzles are clever without testing your patience, and the top-notch voice acting that plays throughout the demo makes the narrative feel personal. Wherever the rest of the story in The Forest Quartet goes, be sure to get a front row seat.

Do you like fishing in video games, but wish that you could get a little more spooky with your angling? Dredge combines fishing, ship customization, and resource management with a slow, steady undercurrent of dread.

You play a wandering fisherman who’s crashed their ship on a strange island. When the kindly (or at least seemingly kindly) Mayor loans you a new ship and asks you to pay your way, you’re quickly out on the water again – but he warns you to be back before sunset when the fog rolls in. Everyone else you meet is similarly eerie and cagey about the world, but something is definitely amiss.

Dredge has a lovely art style and sound customization mechanics, and the horror elements in the demo hint at bigger, scarier things lurking in the deep.

UPDATE: Mars First Logistics isn’t technically a part of Next Fest but a demo can be played during the event.

Combining the fiddly mechanical complexity of simulators like Kerbal Space Program with the flashy, bright, Moebius-inspired art style seen in recent games like Sable and Rollerdrome, Mars First Logistics’ demo alone can steal hours upon hours from you if you’re not paying attention.

You begin by piloting a humble Mars Rover across the red planet’s empty landscape, ferrying supplies to different outposts. As the jobs you take get more complex, you’ll need to build new tools onto your rover, and it’s here that Mars First Logistics really delivers: the trial and error approach of tinkering with your machines, screwing up, breaking everything, and trying again, is an extremely gratifying gameplay loop.

Mars First Logistics is a cascade of customizable systems within other systems, presented with top-notch polish and style. Even as a demo, its depth is staggering.

Taking its artistic inspiration from the drawings in the margins of medieval manuscripts (academically called Marginalia), Inkulinati sees you acting as a bored medieval scribe, doodling turn-based battles with your fellow scholars.

Battles take place on a 2D field, with your scribe summoning cartoon animals to do battle with the enemy’s forces. You collect ink to draw new units, and can even push, pull, and smudge out enemies on the printed page.

Inkulinati takes the tried and true bones of turn-based strategy games and flips them on their ear with their distinct art style and loopy sense of medieval humor. Even as a demo, the experience is finely polished and well-balanced, with a host of difficulty options and a deep well of replayability.

Those medieval monks may have been bored, but you won’t be while playing Inkulinati.

For fans of PS1-era platformers like Klonoa, DoubleShake seeks to recapture the joyful experiences of yesteryear. Players control Loam, a resident of a tropical island paradise, as she runs, climbs, jumps, and battles her way across her island to save it from forces of Chaos.

The controls in DoubleShake are buttery-smooth, recapturing how you might remember those old platformers back in the day, instead of the actual, clumsy by modern standards controls those titles tend to have in reality. The graphics likewise capture the energy and youthful spirit of bygone titles while still feeling distinct and fresh.

Nostalgia can be a dodgy premise to build a game on, but DoubleShake looks to be taking all the right lessons from the past while still constructing its own version of what a 2.5D platformer can be in 2022.

6. The Case of the Golden Idol

A spin on the point-&-click adventure game genre, The Case of The Golden Idol asks you to solve mysterious murders based solely on a series of images.

For example, in one you see a dead man reclining on a bed in his study, sporting a terrible head wound. You can click around and see his diary, his correspondence, his list of what outfits he wears for what occasions, and so on. With all this info, you then must assemble a timeline of events, identify the victim and his cause of death, and discover other pertinent clues to a larger conspiracy.

While some puzzles are fairly straightforward, The Case of the Golden Idol quickly becomes more complex, testing your deductive reasoning and lateral thinking to a degree perhaps not seen since Return of the Obra Dinn.

For fans of detective fiction, classic adventure games, or just good ol’ brain teasers, this demo is an excellent sign of things to come.

While there are plenty of rogue-like deck builders on the market today, Wildfrost manages to stand out among the crowd. It has a dynamic art style, recalling shows like Adventure Time and She-Ra and the Princesses of Power. Its arctic setting opens doors for unique characters and enemy designs, from warlord penguins to loyal fox warriors.

Mechanically, Wildfrost mixes up the usual card battler in a few ways: You get a new character for each run, with new stats, buffs, and special abilities around which to build your new deck. Your character can also move around multiple lanes in the battlefield, adding an extra layer of strategy. Different cards can also speed up your attacks, slow down your enemies’ moves, and more.

Wildfrost also rewards you with progress after each run, so bad luck and quick losses don’t make you feel like you’ve wasted your time. The result is a strategically-rich exchange that rewards careful, creative play.

While there are plenty of titles looking to be Pokémon-likes on the market now, from TemTem to Ooblets to the upcoming PalWorld, Cassette Beats stands apart with a unique spin on the monster-fighting formula and a whole heap of style.

You control a castaway who has washed up on a strange land called New Wirral, populated by other transplanted former Earth citizens, and crawling with unique monsters that can be converted into sound and recorded on cassette tapes. Armed with a trusty cassette player, you can capture and transform into these creatures to do battle and explore the world.

Cassette Beasts has the usual type advantages and special moves in its turn-based creature fights, but it adds on neat new mechanics like fusing multiple monsters in battle, and the way your health and the health of the monster you’ve turned into remain independent of each other.

Add in a groovy soundtrack, memorable characters, and a deeper narrative than wanting to be the best, like no one ever was, and Cassette Beasts has all the makings of a Top 40 hit.

A point and click adventure game set in the Wild West, Rosewater follows tough-as-nails Harley Leger as she unravels a larger adventure that takes her all across an alternate 19th century America.

Rosewater’s unique art style – a mix of 2D line art and rotoscope animation, makes it look truly unique, something equally timely and timeless, especially for fans of adventure games like The Last Express or the Monkey Island series.

Rosewater’s puzzles reward creative thinking and aren’t beholden to a single solution. You can have Harley be persuasive, intimidating, charming, or cruel, and odds are your approach will lead you somewhere interesting. The demo puts a great foot forward, introducing you to memorable supporting characters and the vibrant setting of Rosewater itself.

While the current demo doesn’t yet have voice acting, there’s still some lovely writing and music that conjure up a rootin-tootin Western extravaganza that will be worth following her on.

Dead Letter Dept is a nerve-jangling horror game about the high-stakes world of, erm, data entry. As an employee for the eponymous Dead Letter department, your job is to transcribe letters that cannot be delivered or returned into a computer.

What starts as a humdrum typing simulator subtly and constantly builds into a paranormal creepshow as the packages get more damaged and unruly, and seem to be communicating directly with you.

Fans of analog horror, creepypastas, or the banal surreality of Control’s Oldest House will love the bureaucratic fever dream of Dead Letter Dept. The demo gives us plenty of tastes of something deeply wrong emanating from these parcels, and the full game will surely be just as, if not more, enthralling.

READ NEXT: How to Play League of Legends on Steam