Even if people still say "I’ve got a bad feeling about this" too much. 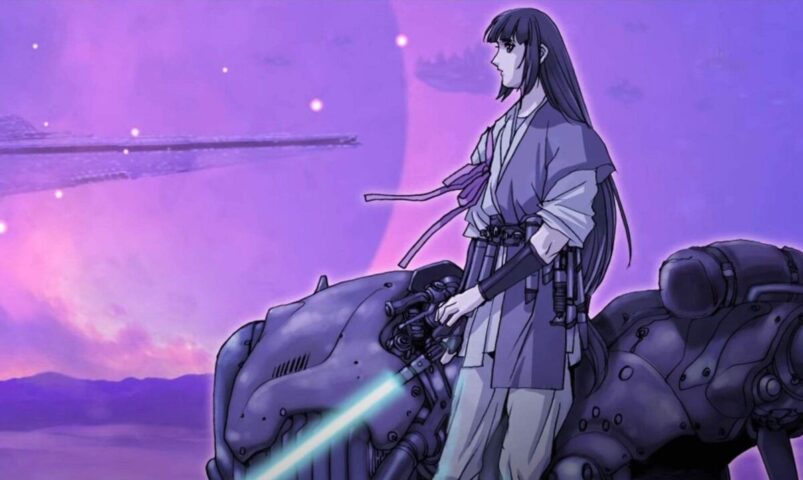 Disney+’s anime anthology Star Wars: Visions isn’t perfect, but it has a clear and straightforward ambition, to tell nine self-contained stories in corners of the Star Wars universe that we haven’t seen before. In that, it succeeds: in episode one, a nameless warrior fights a Sith conqueror who wields, of all things, a lightsaber parasol. There are already several things in here we’ve never seen before, with the laser umbrella being only one of them. Another episode turns lightsabers into mood rings, casually riffing on what exactly this all-powerful pop culture symbol means and how it functions. In another, a droid’s perspective on the Force and the concept of Jedi gets explored for maybe the first time ever (it’s also the most attention a droid’s gotten in Star Wars since the misfired subplot in Solo).

Prior to Visions, the Disney-era of Star Wars’ deluge of content (Rebels, the final season of Clone Wars, The Mandalorian) have struggled to find their own identity within the larger Star Wars tapestry. Often this is due to how Star Wars structures its stories around major tentpole events, like the rise of the Galactic Empire, the Death Star, or the victory of the Rebels in Return of the Jedi. Beyond these narrative landmarks, Star Wars stories also have a seemingly unshakeable tendency to fold in on themselves and drift, like they’re caught in a black hole, toward certain icons of the franchise: Order 66, or Darth Vader, or anybody with the galaxy-dictating last name Skywalker.

The problem is, those stories have been told. We’ve seen the truth about Luke’s father. We’ve seen Han shoot first. We’ve seen the original trilogy, and we even saw it again in J.J. Abrams’ sequel films. Even The Mandalorian, a show taking place after the original trilogy in a relatively unexplored span of time before The Force Awakens, couldn’t resist the gravitational pull of Star Wars’ canon, as its new characters collided with old friends from the Clone Wars animated show and Luke Skywalker himself, the man forcing Mando’s solo adventures to cram into his own established canon.

For all this self-referential behavior, however, Star Wars refuses to actually interrogate itself, and is instead mostly content to play the hits. The Last Jedi, the film that dared challenge this, and subtextually challenge the notion of viewing the old films as unassailable holy texts, was met with extremely divided reviews, with some seeing it as something fresh and new that still pays homage to the established films, and a much louder portion of the fandom considering it tantamount to high treason. That’s what happens when a sci-fi franchise spends decades trying to recapture the hits, and die-hard fans, being die-hard fans, canonize the work of fiction into an unattainable standard of quality.

Enter Star Wars: Visions, which hands the IP of the Star Wars universe to a series of reputable anime animation studios and lets them take this company car out for a spin. Each of these nine standalone episodes manages to find a unique take on what a Star Wars story can be, as opposed to what they’ve already been.

The stories in Visions take on essential Star Wars concepts like master-and-apprentice, or familial connections, and spin them in ways that feel distinct. The aforementioned droid jedi episode, riffing heavily on manga and anime forefather Astro Boy, highlights a neglected perspective in Star Wars. Conversely, the first episode, ‘The Duel,’ centers on a prolonged lightsaber duel which isn’t exactly original in its own right but complicates what viewers take for granted about the usual one-on-one fights that the franchise loves. We’re a long way from “I am your father,” and thankfully Visions isn’t obsessed with recreating exact moments from those decades-old original films.

Visions acts as a sort of remix of classic Star Wars, played in the anime medium – albeit one that has some shared narrative sensibilities as the original, given how much George Lucas cribbed from Japanese samurai cinema. In fact, the episodes are the least successful narratively are the ones that try to play like an anime cover song – Studi Trigger’s ‘The Twins’ is a visual feast, surprising no one who’s seen their work on Kill la Kill and Tengen Toppa Gurren Lagann, but narratively it hits too many over-trod beats about the dark side of the force vs. the light.

The final episode of Visions, Science Saru’s ‘Akakiri,’ ends in a new twist on the usual ‘dark side tempting the light’ Star Wars structure, but takes a rote road to get there. Still, while the tune in Akakiri is familiar, its twists and finesse do end up telling a new story, proving that other Star Wars content has been playing it safe in even their most standard narratives.

One crucial aspect of Visions’ success is in how few recognizable characters show up across the whole show. Jabba the Hutt and Boba Fett do feature in one early installment, but they’re antagonists, not the main characters, and the episode is not about them: it’s about a padawan who becomes a rock star and sings into a lightsaber microphone, a sentence that’s in itself cooler than anything in Rise of Skywalker.

Not only is a rock-and-roll ex-Jedi a neat idea in itself, it’s a character that we didn’t know beforehand, with no connection to established lore beyond a brief touch with Order 66. Star Wars takes place in an enormous universe, filled with hundreds of populated planets – why does it usually boil down to family drama and only a handful of last names?

Visions’s greatest achievement, beyond making good on the overdue concept of official Star Wars anime, and beyond the strength of each individual story, is how it makes Star Wars feel new again. Don’t get me wrong, it’s still Star Wars: the bad guys wear black and use red lightsabers, people still talk about the Force in reverent tones, and aliens and robots still talk in chitters and beeps that everyone around them understands somehow. But beneath that, we have a show that bothers to try new things. It manages to create new narratives and scenarios within a familiar background, without coasting on fans’ recognizing who Boba Fett is. In a galaxy that’s gotten as cramped and same-y as Disney’s era of Star Wars has, that’s an achievement.

READ MORE: Why The Last Jedi Seems So Familiar