Stars in their eyes. 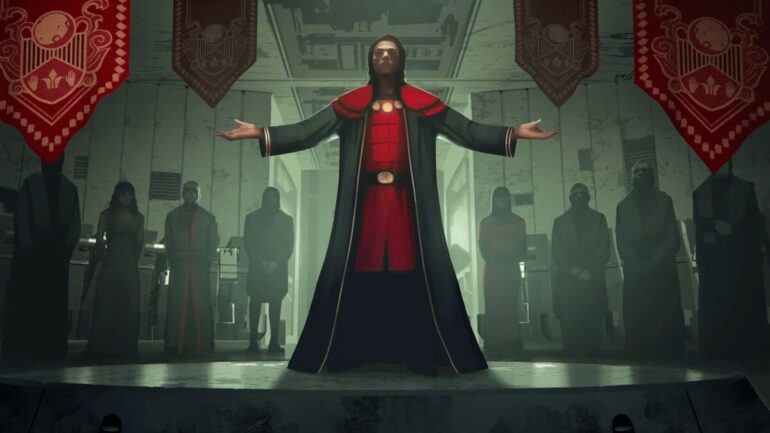 Paradox’s Crusader Kings has certainly become an influential strategy series in recent years. Its focus on the backstabbing and vital relationships between characters is an excellent system for spicing up strategy games with role-playing elements. Star Dynasties, though not the first game to delve into character relationships as a core mechanic of the game, is certainly one following very closely in the footsteps of Crusader Kings.

The simplest way to summarize Star Dynasties is that it’s a turn-based Crusader Kings-lite set in space, with all decision-making revolving around characters and their relationships. The game goes into Early Access on March 15th and already the developers have presented a solid framework for the future.

Star Dynasties is mechanically simple so that players can focus on the role-playing and strategic decision-making which form the core of the game. In terms of actions, players will have a limited amount of action points they can spend on missions for family members or to enact various domestic and foreign policies. Don’t expect the same level of complexity in micromanagement in Star Dynasties as the game retains a focus on characters, a grand strategic scale, and hands off control.

The developers opted for a procedurally-generated approach for each playthrough rather than following a set narrative or a historically grounded campaign. This leaves the door open for players to engage in emergent storytelling, which both creates personal connections to in-game characters and provides limitless potential for replayability, as no two playthroughs will be the same. A decent variety of character customization options adds to the replayability and personal investment for each playthrough.

The goal in Star Dynasties is to become the dominant power of all colonized worlds. The best ways to expand is to fabricate claims, establish good relations with barons and dukes, declare wars, and demand allegiance from neighboring factions. The decision-making web of complexity will exponentially increase as more vassals get added to the players swelling empire, as they have to contend with unruly subordinates and other ambitious lords.

However, the game is currently just a functioning skeleton that certainly has potential, but can be held back by some significant issues. The first concern for Star Dynasties is its accessibility. Grand strategy games in general, Paradox’s titles very much included, usually have difficulties in accessibility as the scope of the game can overwhelm with the sheer number of events and elements to keep track of.

Well-designed UI is one of the best ways grand strategy games can invite and ease players into the armchair strategist experience. In its current state, Star Dynasties has an unfriendly UI and players will likely be overwhelmed, at least during the first few playthroughs. The UI issues are a mix of element sizes and positions, relevance of information, and the number of fiddly menus. All these issues make the game seem much more complicated and intimidating than it actually is.

The next concern for Star Dynasties is its depth and negative impact on replayability. While the procedural-generation approach to each playthrough is an interesting idea and has the potential for good replayability, the lack of variety in paths to victory can undermine replayability. It seems that aside from military dominance, fabricating claims, and exploiting good relations, none of which are too involved, there isn’t much else to achieving victory.

However, in its current state, Star Dynasties has several pressing issues to address, which include its settings and mechanics. The game’s science fiction setting seems to take inspiration not only from Crusader Kings for the feudal political atmosphere, but also from Battletech and Warhammer 40K as humanity finds itself in a period of technological stagnation if not regression.

The issue with the setting is that there aren’t any features or elements that reflect or identify the setting and, in turn, enrich the game’s systems further. It all feels rather generic and the space opera setting comes across more as a gimmick or formality to differentiate the game from its clear source of inspiration on a surface level. By expanding on the lore, establishing a unique aesthetic style, and introducing mechanics that emphasize the unique nature of the genre and setting Star Dynasties can really find its footing.

The developers can really make their game shine by finding clever ways they can innovate and develop already established mechanics. Not only that, but if they can find ways to introduce entirely new features and systems, then Star Dynasties can solidify its legacy in the strategy genre. It’s very clear that the developers are passionate and I’m confident that they will show something interesting down the road.

Star Dynasties has a long road ahead of it. Early Access seems like an excellent platform for the developers to find a unique niche and identity for their game. It remains to be seen if Star Dynasties can break free from the shadow of Crusader Kings and find its own place in the light, but currently it seems to be following too closely to its inspiration for its own good.