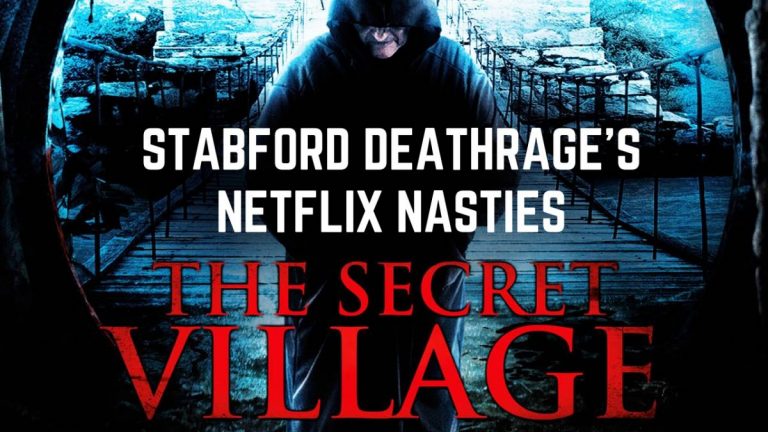 A journalist investigates a sinister conspiracy in this not-especially-thrilling thriller.

Barely seconds into the film, the word ‘committed’ is misspelled in the expository inter-title, which barely describes the events of the Salem Witch Trials. A journalist walks into her house to find a strange male there, but it’s really a meet-cute with her new male roommate/future boyfriend, and it’s not odd or awkward at all, and I highly doubt she’s going to be attracted to him in five minutes. Meanwhile, a guy in a black cloak lurks on someone’s porch, and people fight in a basement using plastic plumbing tubes. The journalist visits the guy from Office Space, you know, the guy who invented the Jump To Conclusions Mat, but he’s seen here wearing an awkward ascot, and they talk about ergot poisoning even though he doesn’t really want to. A guy dressed in a leather jacket lurks in the woods. I think these lurking people are supposed to be eavesdropping, but I’m not sure how they can do that through solid walls.

The guy from Office Space talks about a secretive village that has its own government and which seems to half-heartedly threaten journalists with bodily harm, so the journalist is warned by Office Space Ascot not to ask the villagers questions. She immediately asks the villagers questions because she’s a journalist and it’s in the script, and this unconvincingly irks them. The leather jacket-lurkers inject disposable extras with something mysterious by hypodermic needle, which is probably fine and it probably doesn’t contain ergot at all. Can people be injected with ergot? I don’t know, and I’m not sure the filmmakers know because it is never explained and just sort of happens. Anyway, the film continues although it probably shouldn’t and it’s often out of focus, and stuff occurs, like a group of cloaked individuals having a brief meeting in the cemetery, but these things go unexplained. I think it’s supposed to give the film an unreal, hallucinogenic atmosphere, but it doesn’t.

One of the leather-jacket lurkers carries a woman over his shoulder like a sack of potatoes while the two leads have a walk-and-talk over a bridge. Due to editing, it’s unclear how close these events are to one another. Can they see each other? Are they miles away? Are they in the same state? It’s a mystery which I doubt anyone will be able to solve, unlike this film, where it’s been apparent how it’s going to unfold since the journalist first appeared in the beginning of the movie looking like someone stole her Sephora gift card.

The journalist walks into a villager’s yard and starts to ask questions again because she’s a journalist and it’s in the script, and the villager is unconvincingly irked by this yet again. A man in a black cloak lurks nearby, I think. Maybe he’s in another state. It’s unclear. A poorly green-screened apparition menacingly appears, sort of, and only Office Space Ascot can see it, I think. It’s very brief, so I doubt we need to be concerned about it.

More movie happens although I wish it wouldn’t, which includes confusing re-establishing shots, abrupt and inconsistent filters, and disjointed editing. Scenes come and go. The year 1999 is superimposed on ancient tombstones. I think something terrible happened in 1999 which killed some villagers, but it’s never fully explained, and it’s probably because it’s a secret or someone forgot to tell us.

Ominous, supernatural events occur, such as an overhead lamp swaying, but it isn’t especially ominous or supernatural. It just seems like a lamp is swaying.

The male lead has a meeting with the two leather-jacketed villains, and they sit and look at each other for an uncomfortably long period of time. Guys wearing cloaks meander through scenes. It’s supposed to be eerie. It’s not. Sometimes you can tell when the director told them to start walking. That doesn’t help.

Suddenly, the journalist has a dream, I think. A ghost in the next room or a house down the street or in the next state unconvincingly dissolves into a fireplace somewhere. Although the journalist is in bed, she seems to react to it, but because of editing, I’m not sure.

Now, I know what you’re thinking. You’re thinking, “Stabford, are you going to spoil this movie by saying that the journalist is suffering from ergot poisoning she inexplicably contracted because she gradually starts wearing some smoky eyeshadow like she just found her Sephora gift card, and the two villains aren’t really villains, even though you could guess from the first five minutes of the movie?”

Now, why would I do that?

Characters appear in old-timey costumes and the journalist doesn’t react to it, and I presume she thinks she is on an elementary school field trip to Colonial Williamsburg. She does a bit of breaking and entering into villagers’ homes for some reason. Suddenly, the journalist starts working at a coffee shop, and even her roommate/boyfriend thinks that’s abrupt and odd. Ergot poisoning! Oops, I mean Sephora! Some of the villagers’ corpses, I presume, are lined up on the floor for some reason, and one of them blinks. Did it happen in 1999? Did it happen in the 1600s? Did it happen today? I’m not sure. Her roommate/boyfriend she met five minutes ago or she’s really known all along (Sephora!) makes a mysterious conversation on his iPhone, but it’s upside down. Lines are said, but they don’t seem to make a lot of sense. More villagers are kept locked up in a room somewhere, and they unconvincingly twitch.

Suddenly, the movie ends a few times, and I wish it had ended much, much sooner. The Secret Village somehow makes M. Night Shyamalan’s The Village seem like an unfairly maligned masterwork. The Secret Village appears to be fashioned from chunks of three separate films duct taped together, and lots of important stuff is missing. It’s a LOL-worthy hot mess which doesn’t seem to make sense or have an awful lot to do with the Salem Witch Trials, and it’s recommended if you like stuff that sucks.