Looking Back On Spider-Man: The New Animated Series

Here I am writing about Spider-Man again, waiting for the game to come out in September, so I am holding myself over with some of the lesser-known cartoons. As much as I loved the 90s Fox Kids show, appreciated Spectacular Spider-Man, and understand why some people truly enjoy Disney’s Ultimate Spider-Man with its kookiness, I still think Spider-Man: The New Animated Series deserves some more attention. MTV took a swing at making a different kind of Spider-Man cartoon in 2003, and the results were unique.

Beyond everything else, the show is a reflection of when it was made. No, I don’t just mean because all of the phones were made to look like Sony models from that time with some Nokia ringtones in some weird in-depth advertising, but everything from its art, story, and even setting were affected. The show originally sought to find its foundation in the still fresh Ultimate Spider-Man comics line, but was soon altered to continue the story of the world the first Sam Raimi movie (2002) had crafted. Had it run for more than one season (13 episodes), the show would have ideally borrowed from Spider-Man 2 as well, but instead remains this kind of weird stopgap where viewers who aren’t familiar with the movie feel like they’ve been dropped dead in the middle of Peter Parker’s story. 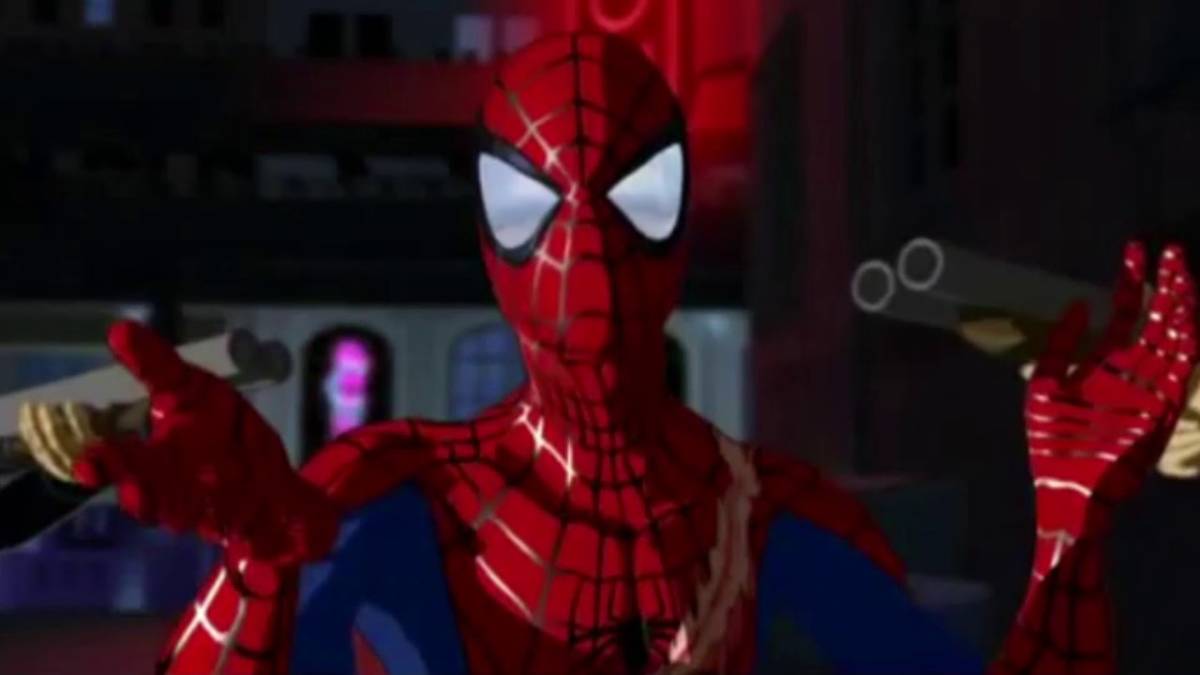 This setting drops the hero in college and gave the producers a lot more freedom, as it was expected to draw in an older audience than the previous cartoons and allowed them to work with more adult themes. The ideas of regret, sex, and especially death push to the surface a lot more with this iteration, not to mention the visual damage viewers see on the hero. Also, this is a timeline where Spider-Man is disliked by most of the public and pursued by police.

Most of the episodes were handled by the Hugo Award-winning Morgan Gendel, and it shows in the stories. Some of these tales are classic material, while others step a bit outside of the box, tackling a trope from another angle. The dialogue seems to have been cut in some places for time, or otherwise simply butchered by poor wording, but has a few shining points when the three main characters are given some space to flex their relationship, and I love that they gave Spidey’s wisecracking a real shot here.

The show has a good cast of characters with Peter, Mary Jane, and Harry Osborn being the focus. Peter and MJ are in a blossoming relationship which quickly becomes a triangle, and Harry is trying to play it cool while still hating Spider-Man, a character trait that bogs down some of his scenes when he isn’t delivering solid one-liners. It was also an odd choice to leave Aunt May out entirely—other than the slightest nods—because they wanted to keep the show centered on a more youthful demographic, which sounds a little silly. They also brought in new characters that were seemingly slight alterations or amalgamations from existing ones. This includes several of the villains, but shows even more with a character like Indy, who was made for the show, but seems to feel the role of and share traits with someone like Betty Brant. 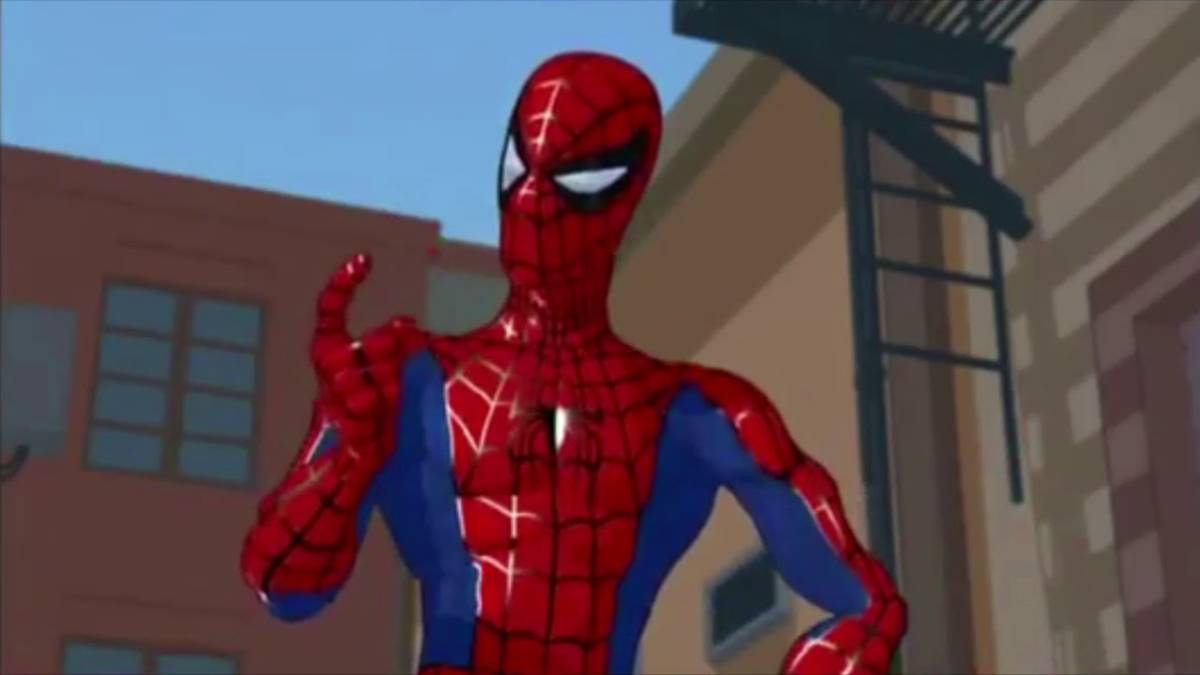 There is a lot of good voice talent in the show, most of which I don’t think got to show off their full potential, other than Neil Patrick Harris as Spider-Man. Leave it to NPH to capture the character in such a strong way – this was probably my favorite part of the show. I was glad to see he got a chance to voice the character again in the Shattered Dimensions game. My first time watching the show had Mary Jane’s voice actor growing on me after a while, but I had no clue until recently that it was singer Lisa Loeb bringing her to life. Harry rounds out the trio as Ian Ziering, from Beverly Hills 90210 fame, and it isn’t that his performance lacks, as much as the scripts give him less to work with other than forced bouts of Spider-Man hatred and womanizing. There are several other great performances with talented voice actors, special guests – and musicians, since it is MTV. Ed Asner plays a police officer, Rob Zombie voices Dr. Curt Conners, Michael Dorn fits well as Kraven the Hunter, and Michael Clarke Duncan reprised his role of Kingpin, while James Marsters, Jeffrey Combs, Kathy Griffin, Eve, and of course, even Stan Lee lent their talents to various side characters.

There was a good list of villains that appeared as well, even if some thought it was a bit too ‘baddie of the week.’ Personally though, I love any show that gives Silver Sable some more screen time (and she’s getting that movie with Black Cat soon). It is a bit odd that Spider-Man has such a wonderful lineup of antagonists and they chose to make several new characters, but creating something original is possibly how we  get the Harley Quinns of the world. Some of these criminals seem a bit one-dimensional, but those more complicated ones who the stories treat harshly make up for it.

The show attempted to be original and stand out with its art. It is the first thing people notice, a CGI animation rendered in cel-shading that was done by Mainframe Entertaining, famous for their work on the show ReBoot, which used a similar style, and perhaps another example of the company trying to stay at the forefront. The idea was to make it look vibrant and new, while attempting not to lose a traditional feel, integrating certain colors and neon signs against the city for an almost neo-noir look. Spider-Man’s range of motion was a hurtle for the team while using this art style, as were simple things like giving characters baggy clothes or longer hair — thus MJ’s shorter style.

Many shots look artistic, especially in the backgrounds, but a large number feel cheap or rushed, giving the show and almost unfinished look that reminded me of a late PS2-era video game. 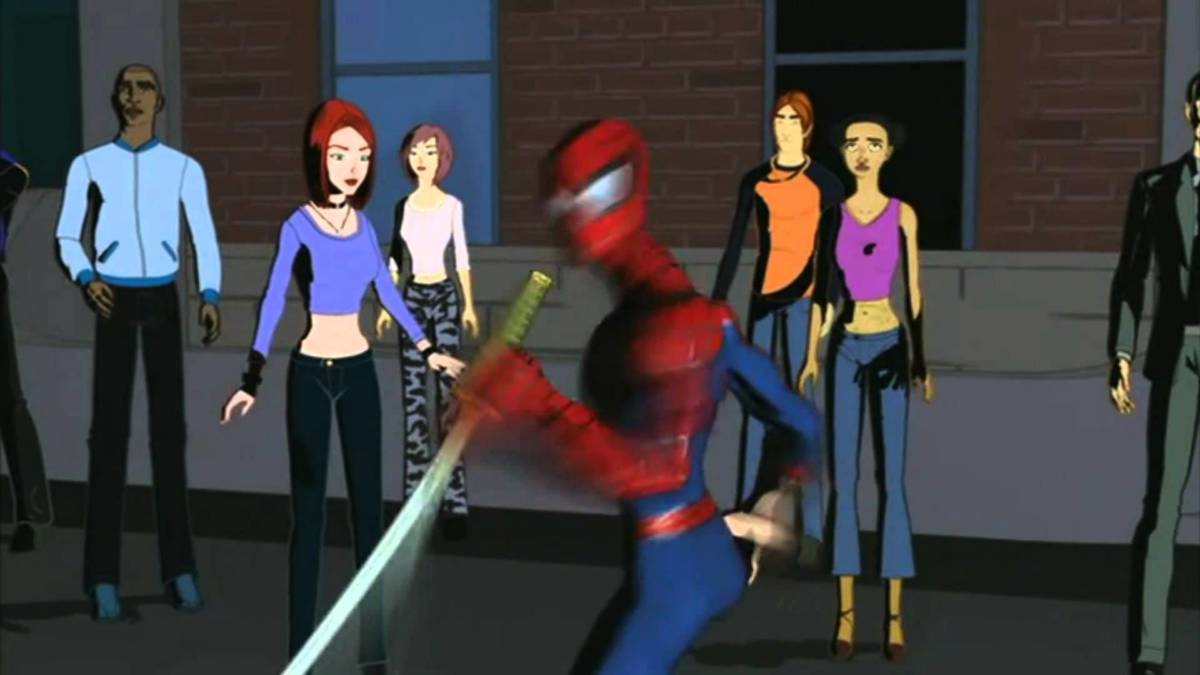 As much as I appreciate what was attempted, I think mixing CGI and traditional elements would have made for a better lasting impression. The music follows in a similar pattern, sounding good for a few scenes, and being a little too much in others, but it works best when the beats attempt to flow with the action on screen. The sounds ramp when they need to, but they are a little too noticeable in other moments—oddly placed and less memorable.

I hate when a piece of media calls itself ‘the new’ anything in its title, because unless that thing is absolutely horrible, it only takes a few years to quickly become an outdated moniker. I know this show had to differentiate itself, especially from the 90s cartoons, but there had to be a better name. The show was cancelled after the first season due to poor viewing figures, but it seems there was enough of an audience to have been upset it wouldn’t be returning. Which is a shame, as the show ended on a bit of a cliffhanger, and the producers seemed to have a lot of ideas for the characters had it continued.

It didn’t help that MTV aired the episodes out of order originally, which screwed up some of the character arcs, and the channel has a history of giving up on several good animated shows. It’s a shame because I see a ton of potential in what fans got, but several elements have dated it even more than necessary. I’m not sure if Spider-Man will ever receive another opportunity at an adult-oriented cartoon, which may leave this iteration in a unique position amongst fans — I hope more take the time to experience it — and as a relic to revisit 2003 for some fun.