Spider-Man: Into the Spider-Verse (2018) REVIEW – A Hero for Today’s World

"Spider-Man: Into the Spider-Verse is my favorite movie of the year. I hope that it’ll be yours too." 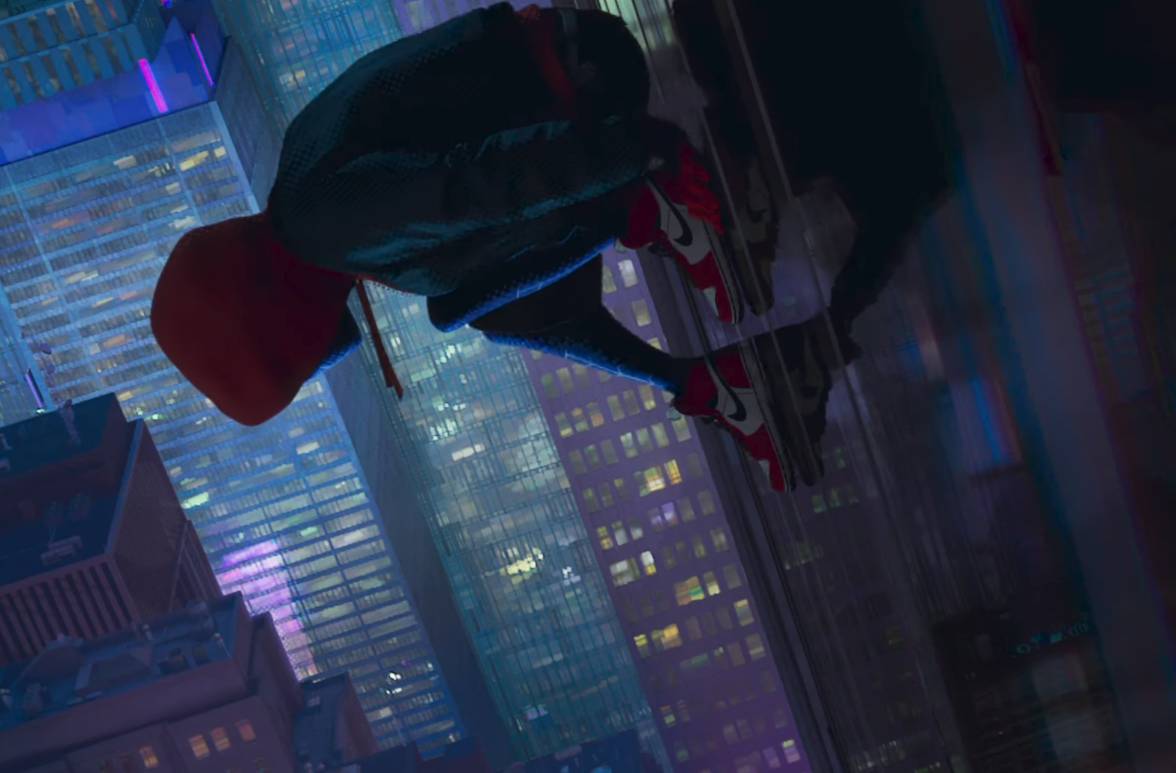 Home
Movies
Spider-Man: Into the Spider-Verse (2018) REVIEW – A Hero for Today’s World 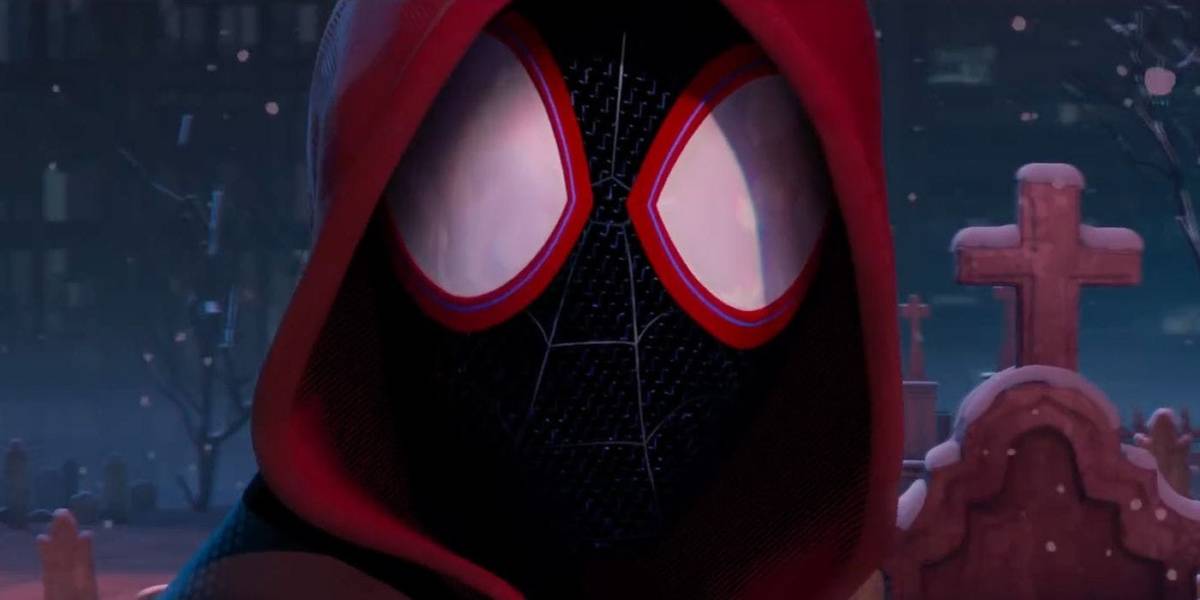 This is an astounding experience to have in a movie theater. All at once a celebration of the limitless of animation, a compelling superhero action flick, and a triumph of storytelling, Spider-Man: Into the Spider-Verse is a wonder to behold. It’s bright and colorful, animated in an incredibly unique style that’s a feast for the eyes, literally popping off the screen the way comic book visuals should. Thought bubbles wander in and out, exclamation marks, action lines, and hand-drawn explosions dominate the screen in a brilliant combination of both 2D and 3D. It’s a true marvel (pun intended) – a genuine work of art that will dazzle children and adults alike.

And that’s just how the film looks. Into the Spider-Verse flips the superhero genre on its head, thanks to the writing team of Lord & Miller, the dynamic duo behind 2014’s groundbreaking The Lego Movie (another animated movie with a distinct visual style). Right when audiences seem like they may be tiring of the genre, and with the end(game) of the Marvel Cinematic Universe in sight for next year, Spider-Verse doesn’t just breathe new life into superhero films, it completely sets a new bar. In the directing seats are Bob Persichetti, a first time director but veteran animator, Rodney Rothman, the writer behind 22 Jump Street, and Peter Ramsey, director of Dreamwork’s criminally underrated Rise of the Guardians (somewhat of a superhero team-up movie itself). It’s an extremely talented team of individuals, and their combined ideas have created something truly special.

Miles Morales (Shameik Moore) is the new Spider-Man in town, and he’s the perfect candidate for the job. A black/latino kid from Brooklyn, Miles juggles his home life with his dad (Brian Tyree Henry, having one heck of a year) and mom (Luna Lauren Velez), hanging out with his uncle Aaron (Mahershala Ali), and starting over at a new school. Miles is a cool kid, which is a bit of a fun juxtaposition to the Spider-Man audiences are familiar with, Peter Parker. Where Peter was a nerdy outcast, Miles is popular, where Peter enjoyed photography, Miles likes to sing along to his music and create visual art in an urban graffiti style. He has both of his parents (and his uncle), and his only real problem in life is getting used to a new school with new friends. That all changes when Miles gets bit by a radioactive spider, and supervillain Kingpin (Liev Schreiber) fires up a machine that rips holes between dimensions, creating an unstable rift in reality. Several different Spider-People are brought into Miles’ dimension from theirs, and they’ll all have to work together to shut the machine down and get back to their respective realities.

Like Peter Parker, Miles is instantly likeable and relatable, and the filmmakers have a perfect grasp on just what it is that makes Spider-Man Spider-Man, and why we as an audience keep wanting more and more from the character. This is the 9th film to feature the character over a span of 16 years, yet Spider-Verse finds multiple ways to make everything fresh while still keeping a nostalgic sense of familiarity. It almost puts other superhero films to shame – following in the footsteps of Black Panther and Thor: Ragnarok (and running full speed ahead), Spider-Verse is exactly the kind of movie it needs to be for today’s world. It’s a craving audiences might not even know they had, there’s just something, or everything, about it that works and feels exciting and new, but most of all, touching. There’s a surprising amount of emotion and heart throughout the film, and Miles wears it on his sleeve, sharing his vulnerability and fear at being thrust into enormous responsibility without an inkling of preparation.

What Spider-Verse gets so right is its overarching idea that anyone can don the mask and be Spider-Man, a message that’s made the character resonate with so many for so long. Spider-Man can be Peter Parker (Chris Pine), a young, handsome, white man from Queens who always saves the day in the nick of time. He can be Peter B. Parker (Jake Johnson), a down-on-his-luck, out of shape divorcee pushing forty and getting sick of the superhero job. He can be a she, in the form of Gwen Stacy (Hailee Steinfeld), a smart and agile young woman who prefers to stick to herself. He can be a 1930s noir-style, black and white hero who fights Nazis and has an endless stream of quips (Nicolas Cage as Spider-Man Noir). He can be Peni Parker (Kimiko Glenn), a small Japanese girl with a fighting mech piloted by her best friend, who is a spider. He can even be a cartoon pig voiced by John Mulaney.

Or, he can be Miles Morales, a young, mixed kid from Brooklyn with a passion for music and art. An entirely new demographic and generation of kids will grow up with Miles as their Spider-Man, and he’s the perfect hero to usher in this new age. Spider-Verse puts every other animated film released this year to shame, sweeping Disney out of the way and daring future contenders to step in to the ring with it. It’s beautiful, diverse, the action is jaw-dropping, the colors and animation are incredible, the story and characters are rich and fully realized, and everything about it just works exactly as intended.

It’s a new and exciting origin story for a new and exciting Spider-Man, one who, without a doubt, will be one of the flagship heroes of the future. And while we celebrate the overdue arrival of Miles (and impatiently wait for his debut in live-action), Spider-Verse also serves as a heartfelt tribute to what came before. It’s a literal and symbolic passing of the torch, easily the best Spider-Man film since Sam Raimi’s Spider-Man 2, and one of the best animated and superhero films of all time. Spider-Man: Into the Spider-Verse is my favorite movie of the year. I hope that it’ll be yours too.