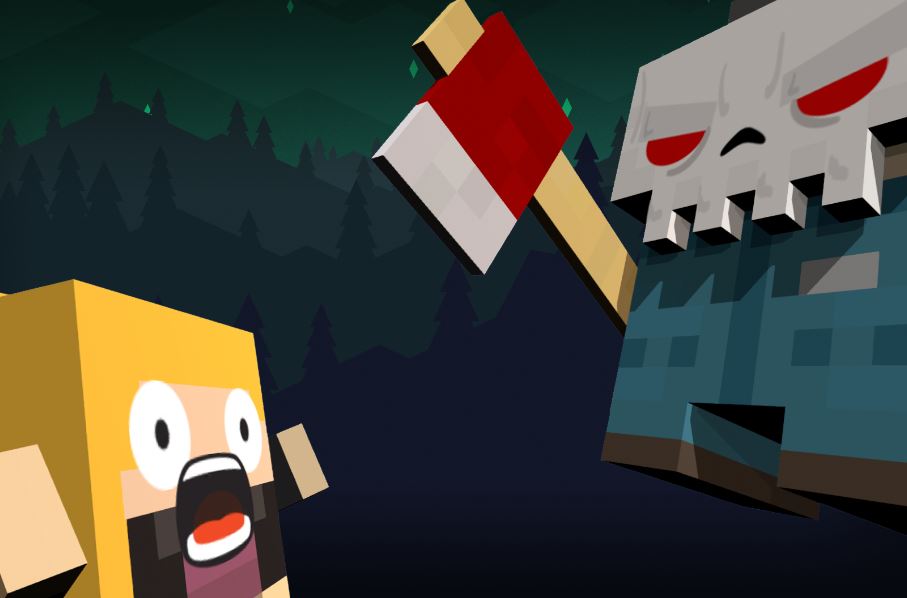 I‘m beginning to think I don’t hate puzzles games as much as I’ve said I do many (many) times in the past. If a chinstroker can bring something new and fresh to the table, I am apparently all for it, despite my brain struggling with logical thinking and being overloaded with quotes from bad movies instead.

Slayaway Camp is another effort that proves puzzle games can be for everyone thanks to its unique aesthetic, charming carnage, and its love for the aforementioned bad movies. If you have even a faint memory of eagerly watching and rewinding all the VHS horror tapes you could find at your local Blockbuster, Slayaway Camp: Butcher’s Cut could very well become one of your favourite games.

As the killer, you slide your way across the “board” and dispatch of all the stoned teenagers and hapless cops you can find. While this might sound simple, it really isn’t and becomes John Carpenter’s version of chess within your first hour of gameplay. Things start off slowly, asking you to slide alongside your victims so you can kill them gorily (or PG, if you’re yellow-bellied) in cutely-designed cutscenes. You think you have Slayaway Camp down to a T, but it gradually makes itself as complex and confusing as playing Dance Dance Revolution while on ketamine. 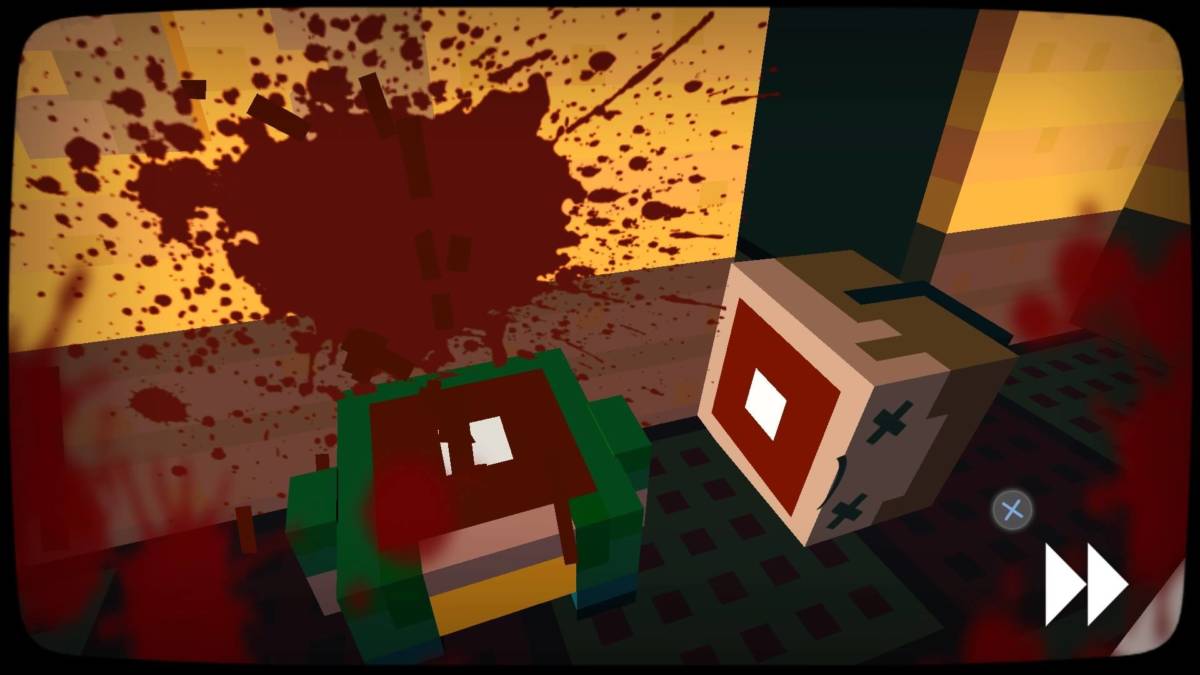 It’s deceptively simple, allowing you to slide across levels and be stopped by obstructions (such as walls and crates), which can then either block your progress or line you up perfectly for the next kill. There’s no free movement in Slayaway Camp – think of it as a maze that you can only explore one square at a time. Eventually, the gameplay evolves to include stuff like fires, mines, treacherous water, and even cats, which can either make the task at hand that much harder or easier. Cats are just as bastardly as they are in real-life, however.

However, the most interesting “puzzle pieces” in Slayaway Camp are the victims themselves. As they don’t particularly like dying, they will scarper away from the killer once he gets within a block’s reach on the board. As you play more of Slayaway Camp, it actually becomes an important mechanic to scare them first before immediately going for the jugular. Panicked victims can either run into a hazard and kill themselves, or scare themselves into a position so that you can use them as leverage to reach others. One particularly tricky puzzle needed me to scare victims into specific spots so that I could then be in position to scare a worker into an electric saw.

Just as Slayaway Camp threatens to show its bloody hand, it does a good job of switching up the loop and varying the mechanics. Instead of giving the player all the time in the world, it sometimes only lets puzzles be solved in a set amount of turns, which means finding the exact right pattern is key. Elsewhere, lights can be turned off to make the killer invisible to stop the victims from running away whenever he gets close. It’s also pretty handy to deal with SWAT members, who will usually kill the killer if he’s just a block away or in their line of sights. 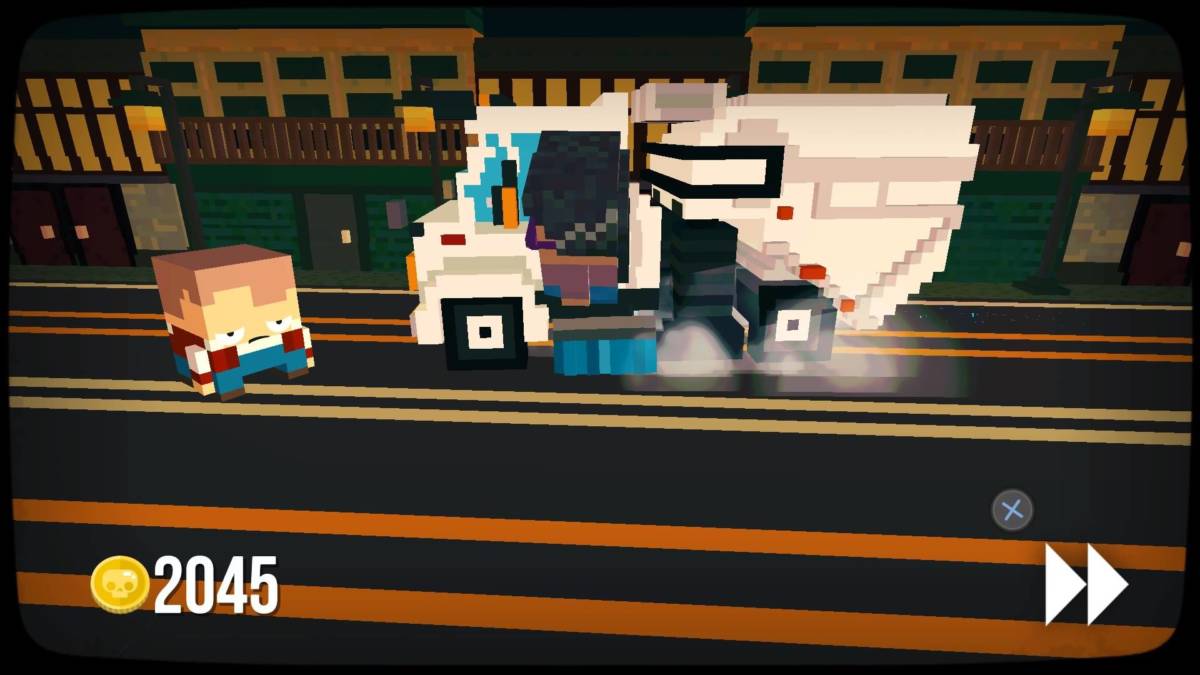 The levels all take the form of self-aware Slayaway Camp movies on VHS, which are added to your rusty and run-down collection in an old rental store. The titular movie is the original in the “franchise” and is relatively grounded before quickly becoming more ridiculous and hilarious as the levels and sequels progress – Slayaway Camp 5: Bloodbath Beach, which has you play as a murderous sharkman, is my favourite. There’s loving nods to the horror genre in almost every inch of Slayaway Camp, even if its low-poly style belies the viscera on show.

In-between levels, a QTE mini-game allows the player to earn coins, which can then be spent in the store to buy new outfits and gorepacks, which are effectively bloodier execution cutscenes. There’s a mighty amount of content to unlock in murder-minded glee, but these coins can also be used to reveal hints and step-by-step walkthroughs for puzzles. Stubborn players will likely not even want to consider this option, but their inclusion should be welcomed by the more obtuse players (like me). There’s only so many times you can hit your head against a brick wall and try to make your brain do its job good before you take the easy way out.

Once you’ve slashed your way through the game’s ten movies, the Butcher’s Cut offers deleted scenes and even its extra seasonal levels. There are hundreds of puzzles here, which contribute towards Slayaway Camp feeling like one of the most replete games I have played in a long time. If you’re looking for a very particular itch to scratch that involves throwback horror, knowing nods to its audience, and a lot of twee bloodshed, Slayaway Camp could be as worryingly satisfying as watching this over and over again.

Verdict
Thanks to its distinctive visuals, punishing puzzles, and a lot of love for its inspirations, Slayaway Camp could be the ideal game for horror fans.
8
Cultured Vultures is a pop culture website established in 2013 covering all things gaming, movies, and more. We eat your words.
All The News On The Biggest Games