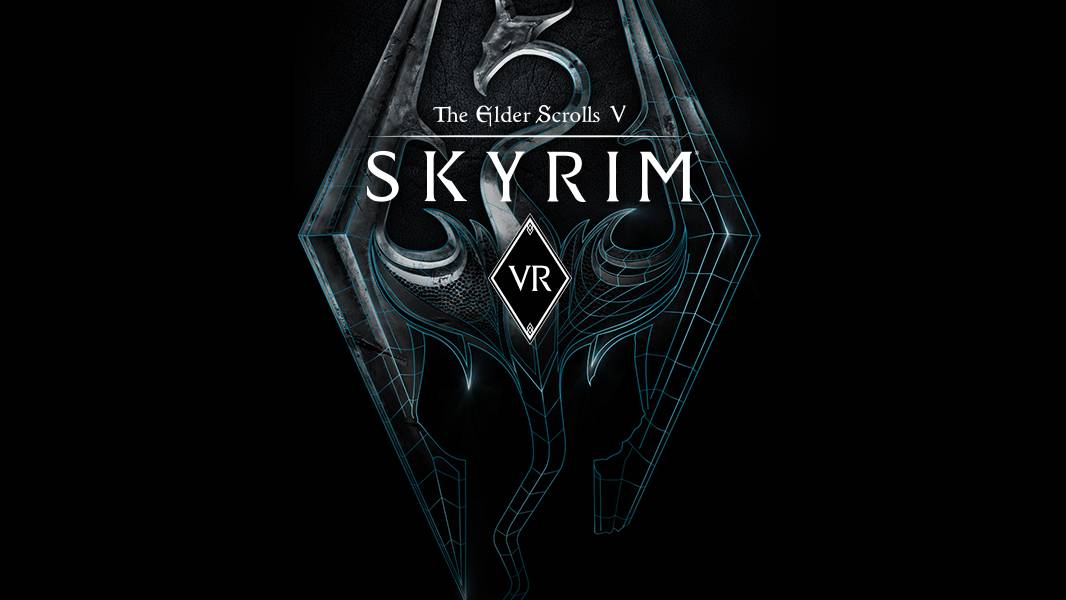 When virtual reality first started coming to the fore again as a legitimate way of experiencing games, there were a few games that were touted as being perfect to make the transition, Skyrim being one of them. I, personally, am still waiting on a VR version of Seamen, but I am a patient guy.

Bethesda, who have embraced VR more than most, announced a raft of their games would be making the leap, their 2011 classic included. With Skyrim VR now out, is it worth yet another trip back into one of Tamriel’s most beloved regions? The short answer is yes, though with a few concessions.

This is Skyrim, down to every inch of its expansive plains and lovingly detailed interiors. Despite some seriously misleading reports, you can walk around everywhere as you would in the original game, rather than moving through teleportation as some have claimed. With a Dualshock, you can traverse Skyrim as normal, though it’s recommended that you set up some filters so that it isn’t entirely the same – turning around quickly is a surefire way to wind up with your head in the toilet. There’s a good amount of customisation available to find the VR experience that suits your stomach the best, including making larger black circles through the PlayStation VR headset so that your eyes don’t get unsettled by so much movement as well as the ability to customise the speed of your turns to the point where it suits. 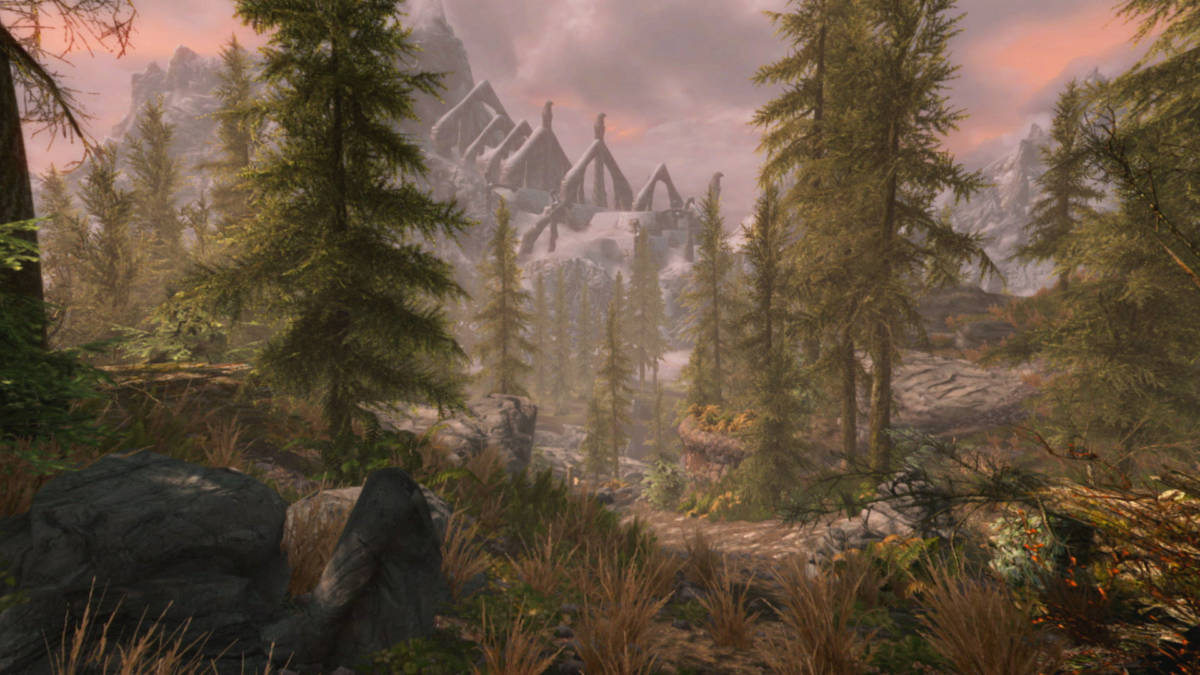 Teleportation is still a part of Skyrim VR, but only when using the Move controllers, which never really felt like the proper way to experience the game for me personally. It’s a little underwhelming overall, but there’s plenty of joy to be had from spraying flames with one controller and wildly swinging your sword with the next. You can also move normally with the Move controllers and it’s okay overall, though for full immersion, you ought to pick up your Dualshock instead.

All of the greatest games have their defining moments, the parts that stick with you long after you’ve walked away. The first dragon encounter is one of the original game’s most unforgettable scenes, so to have that same dragon right up in your face in VR is utterly terrifying and enrapturing at once. The scene before, where you are escorted on a rickety cart to your execution, was a little janky through VR with flailing wood and unconvincing horse animations, but the second that Alduin started causing havoc was the second that I knew I was all in for the ride. 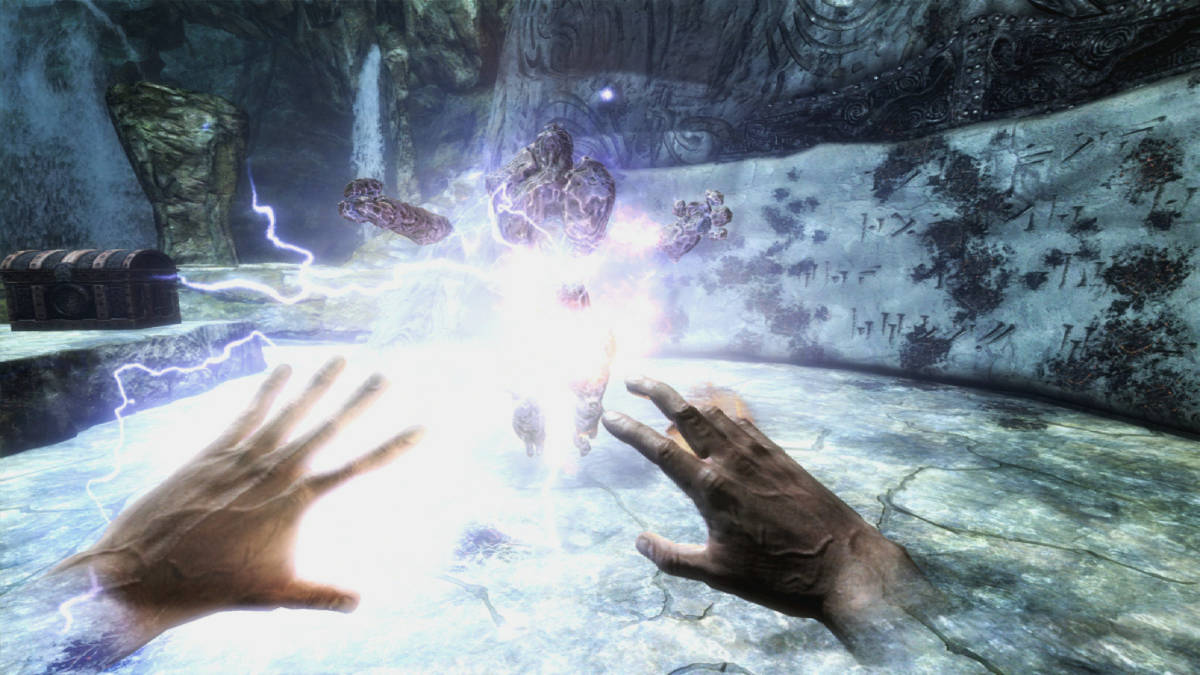 And what a mad ride it was. It’s worth mentioning that I didn’t beat the story, but when there’s such a huge world to explore, why would I need to? I also had to take my sweet time and play in short bursts because of motion sickness, which most likely isn’t down to Bethesda at all but rather that I get motion sickness from walking to the fridge sometimes. With most VR games, I get hot, sweaty, and nauseated within minutes, but Skyrim VR was far kinder to me with sessions going on for well over an hour, sometimes two. Ginger supplements and chewing gum also helped, believe it or not. If you’re susceptible to motion sickness, perhaps take your time with Skyrim VR like I did and space out your playthrough. It’s one of the more forgiving VR games for motion sickness I have played, though the nausea did always eventually arrive.

Graphically, Skyrim VR is more in keeping with its PS3 version than its recent remaster as textures are slightly muddy and character models are less than refined. A necessary compromise to make a game this big work within the limitations of console virtual reality. However, some of its interfaces could have done with a little more polish, specifically the waypoint markers being at the bottom of the screen rather than the top. As I had to sit down to minimise motion sickness, I was often uncomfortably “scrunching” my neck inwards to look at it, which caused neckache after a while – the same goes for looking down to pick up the endless amount of objects littered across the game. Skyrim VR seems more catered towards standing players than those who like to put their feet up as everything worked smoother when I was brave enough to stand, though that’s often the case with VR titles. 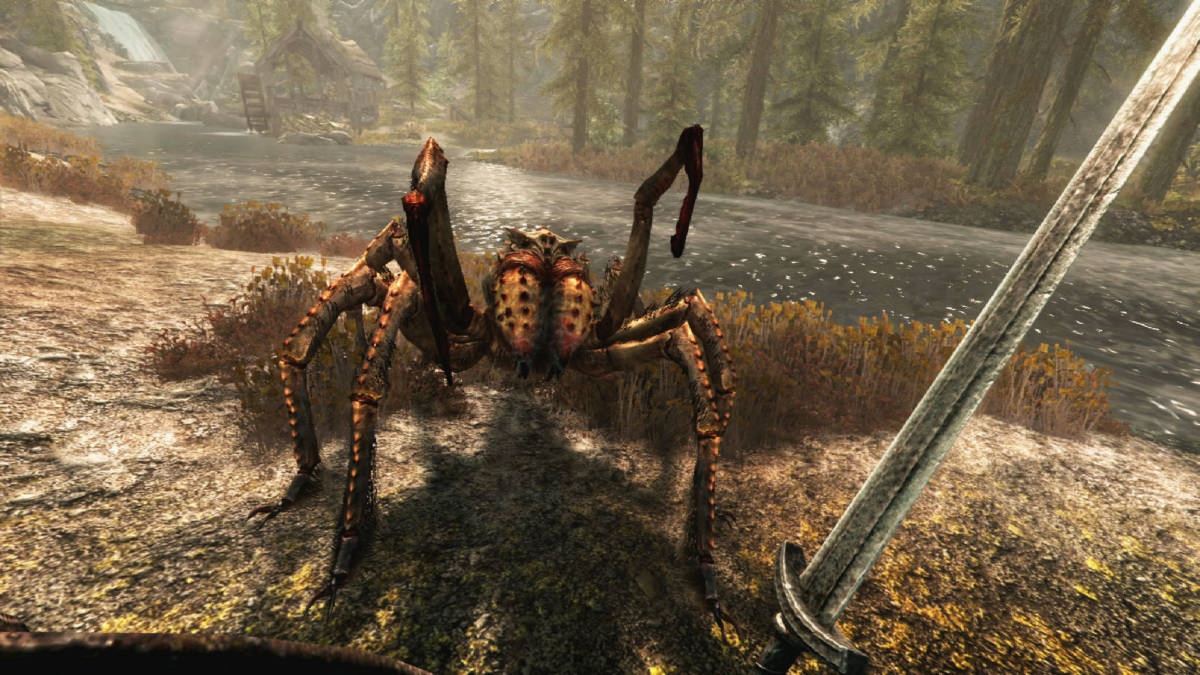 But these gripes are small, and in the grand scheme of things, my time with Skyrim VR was one of almost total wonder, even if I wasn’t as compelled to do absolutely everything as I was the two previous times I had played through the game on other platforms. That this is the latest refresh for a six-year old game is a blessing and a curse for Skyrim VR. While most fans will likely relish being able to revisit their favourite spots and dungeons through a headset, its half a decade old foundations are beginning to creak – the overlooked flaws it had at release are only becoming more glaring as time goes on. It splutters through loading times, which aren’t quite long enough for you to wander off and make toast while you wait but not short enough so that you don’t start singing the main theme song through boredom. And I know that I’ve already mentioned this, but the world of Skyrim looks ropier and ropier with each passing year, even more so when viewed through a somewhat limited VR headset.

However, and I am going to repeat myself again here and sound like a critical parrot, this is one of the most beloved games of all-time in full (expansions and all) faithfully recreated in virtual reality. If you ever wanted to become the Last Dragonborn and shout your way to glory, Skyrim VR could be the perfect way to do just that.

Verdict
The game at its heart might be showing the signs of age, but Skyrim VR is one of virtual reality's killer apps nonetheless. If you know any VR skeptics, show them this game immediately.
8
Cultured Vultures is a pop culture website established in 2013 covering all things gaming, movies, and more. We eat your words.
All The News On Your Favourite Games