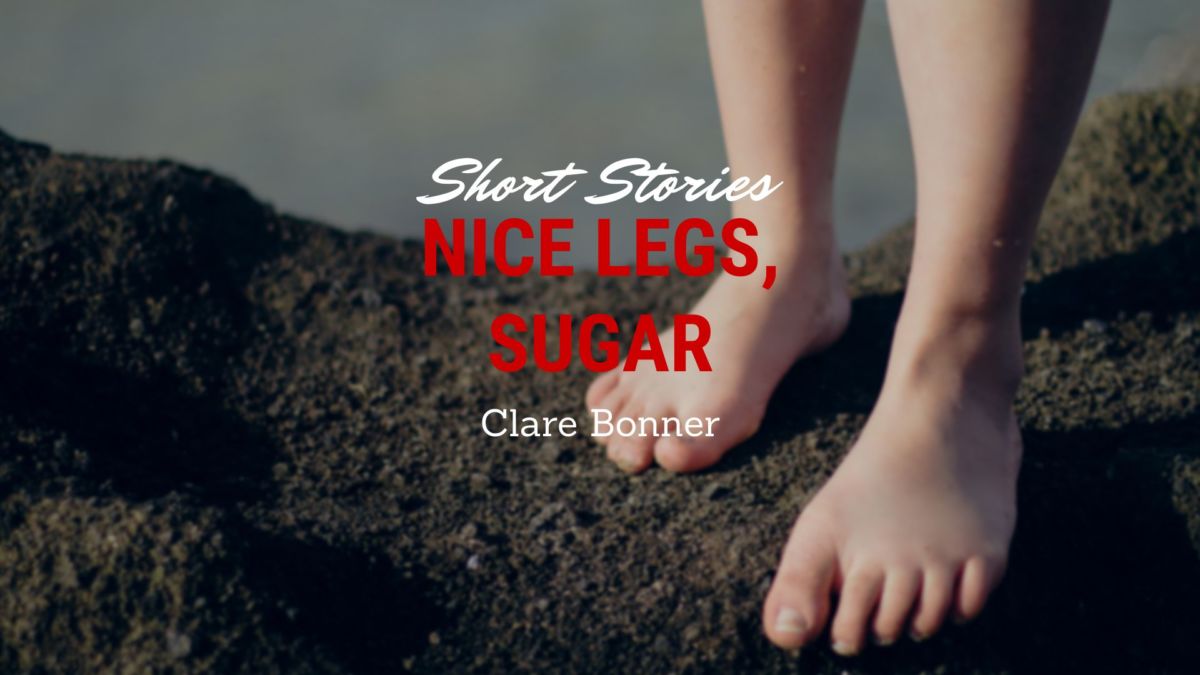 She used to say it when her colleagues discussed their marathon training and fitness classes. They would laugh, and she would see it as tacit compliance for her sedentary lifestyle. She didn’t like exercise, almost as much as she didn’t like being unfit and overweight. She knew that the laughs were only in part at the copycat wit that she had parroted from someone else’s Twitter account. She knew that they judged her, as she balanced a yoghurt on her protruding midriff. She knew that they were laughing at her, not with her. Running now, with fireworks going off in her calves, needles in her chest, and her breath sputtering from her, she wondered if they would still laugh. She could hear the awful scratching, screeching sounds that came from the thing behind her. Was it laughing too? Could it laugh?

The street flickered, a blur of fluorescent light and puddles and pain. She knew that she was running out of road, and out of time. She rounded a corner, realising too late that she had made a mistake. The buildings were hunched closer together now, not a street at all, but a dim and hopeless alleyway. She drew nearer the end, and saw an iron fence, flanked on either side by dumpsters. An hour ago, she would have balked at climbing more than two flights of stairs. Now, without hesitation, she gripped the handle on the lid of the dumpster nearest to her, and attempted to heave her weight onto the slick, plastic surface.

Her legs dangled futilely, trying to gain purchase against the iron fence. Finally, her foot seemed to catch onto a groove in the metal, and she pushed. Hope rose within her, as she finally dragged her body on top of the dumpster. She bent her other leg beneath her, willing the adrenaline to last and allow her to stand. Nothing happened. Another heave, and another. Her body stayed in its awkward crouched position. Only then did it dawn on her that her foot had slipped into a hole in one of the metal stakes, and was caught. In the midst of her shock and exhaustion, there was pain, as the rusted metal bit into her ankle.

She looked behind her, sure that the thing must have caught up with her by now. It was behind her in the alleyway, strolling calmly towards her. The nightmare noises had abated, leaving behind a high-pitched purring. It walked on three legs of different lengths. One leg was muscular and hairy, shod with a muddy sneaker. Another was slender and dark skinned, a shiny black pump with a broken heel on its foot. Lastly, there was a short and skinny leg, that didn’t always reach the ground as the thing walked forward. It was streaked in fresh blood, and a dirty white sock covered the tiny foot. There were bruises on the knee, and a small band-aid adorned with cartoon characters.

The thing’s chest was bare and hairless, the skin a dull cadaver grey. The face had no features, save a weeping, gangrenous wound that could have been a mouth. The three odd legs slapped against the concrete, the uneven sound giving the grotesque impression that the thing was skipping. She tugged her stuck leg with both hands, trying to ignore the blood seeping onto her rain-soaked slacks. She writhed, grunting and slipping across the surface of the dumpster. There was a dull pop, and she noted with detached fascination that she had dislocated her ankle. Her now useless foot flopped against the other side of the fence, the corrugated iron sawing into the meat of her leg. The creature ambled closer still, until it had reached her perch. It lay a greasy hand on her thigh, pinching and prodding, not unkindly. The other hand slowly lifted the leg of her slacks, inspecting her wounded ankle. There was a series of clicking sounds, and she realised that the creature was, what? Disappointed? Unimpressed? It continued to inspect her trapped leg, wrapping its too-long fingers around her calf.

“What do you want?” she croaked, hearing how stupid it sounded.

The creature’s eyeless face turned towards her pointless question. The purring lowered in pitch and was almost pitying and soothing. She looked more closely at the mottled gash on its face. There were pointed teeth, stained brown and red, and a horribly pulsating tongue. Its breath was putrid and sweet, and she gagged from pain and revulsion. The disapproving clicking came again, and she turned her face away, looking to the other side of the iron fence. She saw a neon sign that advertised a fast food restaurant. In the window of what she assumed was the kitchen, there were three or four faces illuminated. Over the purring and clicking, she could hear human voices. Grousing, laughing, shouting. She screamed, words failing her.

Oddly, the creature did not stir, continuing to appraise her injured leg. She kept on screaming, beating her fists against the metal fence. Somewhere in the recesses of her mind, she wondered why it hadn’t happened yet. This thing, whatever it was, clearly had a purpose, and it hadn’t arrived at it yet. It seemed to be waiting for something. Her yelling continued, her hoarse voice echoing against the buildings surrounding them. After what must have been a few minutes of this, she realised that she had captured someone else’s attention. A man stood with his back against the wall of the restaurant, calmly watching. He stood in darkness, his passive face lit by cigarette. He must not see the thing methodically stroking her leg, she decided.

“Please, help me! You can’t see- it’s got- I don’t- fucking HELP ME” she cried, craning her face above the fence and waving her arms frantically.

The man took another deep drag and began moving towards her, mild interest sparking on his face. She tried again to pull her leg free, and the thing tightened its grip, firmly, and clicked again, as though chiding an unruly child. She looked back, and realised that it had moved to the other side of the dumpster, its slit-mouth near her head. She whipped her face away, the sudden movement shooting sharp pain through her half-severed ankle.

She broke off, as the creature moved. The muscular leg reached up, pushing the thing onto the dumpster with no effort at all. It leaned over the fence, stooping down to look (could it see?) at the man on the other side. She could no longer see the man, not daring to move as the creature towered over her. The smallest leg dragged limply against her chest, the dead child’s blood staining her blouse. The man was speaking to her attacker, but she couldn’t make out what he was saying. She noted that his tone, like his delayed reaction to her cries, and his meandering walk towards her, was utterly dispassionate. He seemed neither concerned nor surprised by the scene before him. New waves of dread washed over her. Something was very wrong here.

Her voice sounded thin and weak, the pain and blood loss draining her energy. She was dully aware that her trapped leg was moving, but that she had no part in it. There was a sticky sort of noise, followed by a blunt clang. She looked down gingerly, seeing that her leg was free, dangling from the dumpster and bleeding profusely. Her foot seemed to cling desperately to the rest of her body, a sliver of stringy sinew the only thing holding her together. The conversation continued, and for the first time, the three-legged creature spoke, its voice thick and laboured, like it was chewing on glass.

It grabbed hold of the hem of her slacks, lifting the leg up and letting it drop, as though to illustrate its point. She howled at the jolting motion, her foot twisting like a gruesome marionette. The man’s voice was finally audible, and she was surprised to see that he was now on her side of the fence.

“Fuck, take the other one then. Makes no difference.”

The man and the creature worked together then, turning her onto her back and lowering her gently from the dumpster onto the filthy concrete below. The world spun above her, darkening at the edges. She weakly grasped the man’s arm, willing him to look at her. She moaned, words failing her. He met her gaze finally, and his expression was one disgust, not pity.

He gestured to her shivering form, glancing up at the creature. The purring became a shriek, and the man shrank back, his hands in front of him in a placating gesture. He shrugged and nodded, moving around to lean his entire body weight onto her shoulders. She struggled then, as the creature’s clammy fingers pushed around her flabby stomach, kneading and prodding until it found her hip bones. The pressure built, and she tried to kick out with her good leg. The creature was silent for the first time, obviously concentrating. It’s vice-like fingers pressed down further, until it heard the crunch it was waiting for. She screamed, feeling her body crack and splinter under the man and the monster. Her eyes rolled back, and she vomited skywards.

“Bitch!”, the main exclaimed indignantly, but his grip remained firm.

After several hideous moments of jerking and wriggling, all was still. She couldn’t even hear her own breathing anymore. The creature let her go, and she blearily looked down. For the first time in years, her stomach appeared flat, and she almost smiled. Through her haze, she realised that the lower half of her body was missing, and that the thing and the man were standing at the fence. It appeared that they were haggling. The thing had held her unspoiled leg possessively, the other mangled useless spare was nowhere to be seen. The man gestured to the leg that used to be hers, then to the rest of her body. A few minutes later, a deal seemed to have been struck. The creature resumed its three-footed skipping and sauntered off back down the alleyway, its halting steps slapping on the ground.

The man unlocked the padlock on the iron fence, calling out to the others in the kitchen.