SHORT STORIES: The King of I

"No one wants sad stories, he says." 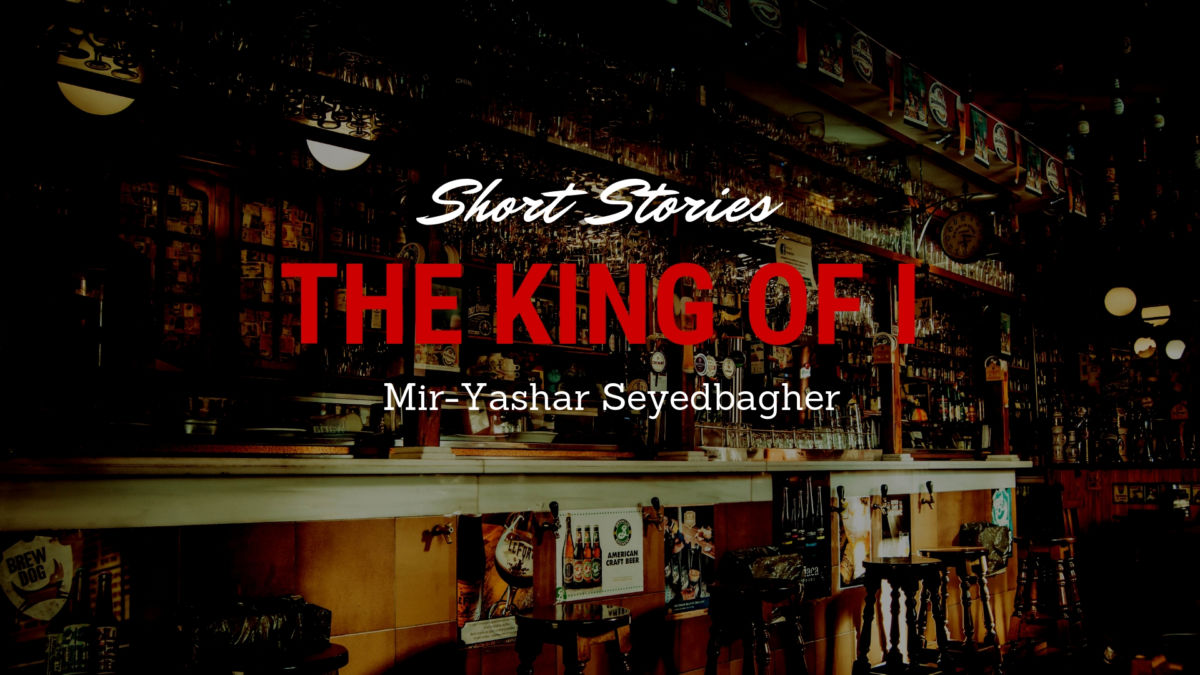 Home
Writing
Short Stories
SHORT STORIES: The King of I

Tyler Dupree’s boss Mr. DiCenzo tells him to keep his life to himself. No one wants sad stories, he says. He is there to serve the depressed, not to be depressed. Tyler works the bar at Crazy Charles’, a pizza joint by campus, with asylum-like white walls, but a fine array of pizzas (Thai Peanut is Tyler’s favourite) and beers. Fat Tire. 90 Shilling. Even good sours like New Belgium’s La Folie. He is twenty-nine and has worked here for two years.

He pours beers and plies students with inebriation and euphoria. He also listens to their stories, even as he wears a mask of indifference. It’s easier. Plus, he has the face for it, the goatee, the beady black eyes. Tyler used to hate his looks, but now he embraces them. If he looks too enthusiastic, Mr. DiCenzo will think he’s on drugs. He has learned much in his two years here. Tyler is no longer the person who can spill out personal stories, interact with ease. While he still longs for all this, he has become something else, a persona Mr. DiCenzo has created.

Tyler listens to people talking of so much, drunkenness, sexual gratification, their most ludicrous pranks. They talk of family, of connections. He tries to preserve their stories, the small pieces they release to him in these moments, pretends they are his own. He admires people’s ability to release these stories so openly, especially when plied with drink. They take on a kind of special weight, especially since he has to hoard his own stories like a squirrel storing nuts. There is no I in Crazy Charles, Mr. DiCenzo always proclaims, as if he is a king. But Tyler needs that I.

Tyler’s life is a jigsaw puzzle with many pieces missing. He can’t seem to fit them together. He is a twenty-nine year old bartender, a college graduate. His parents divorced when he was young. He was a trump card in their battles, something to be utilised for personal gain. He drifted through college. He went from major to major, art, political science, theatre, fermentation sciences, until he settled on literature, because it offered a portal into the past, an opportunity to try on other personas.

Tyler incurred student debts. A world demanding things. He yearns to tell the students who trickle in all these things with a sort of fervency. He wants to tell them of his talents too, his ability to play the piano, to write his own raps, things his father has called senseless dreams. That is when he’s not drunk, inaccessible, living in his boozy dreamworlds. Maybe this is why he really works a bar, to understand people like his father, while he figures out the sum total of his being. The man who bears the name Tyler Dupree.

Sometimes he tries to work these details into conversations with patrons, hoping for some insights. He’s wondered how people see him, if they just see a bartender, or if they imagine his own inner lives, if they read things from the swiftness of his gestures, the mask of his indifference.

He always thinks of the reality and abstains from revealing, though. Mr. DiCenzo would fire him or reprimand him. He calls himself “Caesar,” only half-jokingly. Crazy Charles’ is not a democracy. Tyler imagines himself unable to pay bills, imagines failure unfurling before him. He thinks of the weight of money that keeps him subservient to the collective Crazy Charles machinery. He imagines a day when he has a better position, when he can just relish the luxury of money, of commodities. Of individualism. When he can be someone, though he doesn’t know what.

One Monday evening, Tyler listens to two young men talking about individualism, of all things. He’s heard so many different topics, but this stands out for its weightiness. Meaning among booze-filled trivialities. One of the men is swarthy with a beard and a uni brow. The other has a large bulbous head and short hair, what colour, Tyler can’t recall.

Tyler watches the two men swigging their beers. The swarthy man drinks La Folies, his friend consumes Cloud Catchers. Tyler smiles his old, fake smile, pours beers for other patrons, listens. The words strike him in a harsh fusillade, even as he tries to absorb himself in other patrons’ laughter, low, mysterious. Men’s deep laughter, women’s musical, lilting ones. The men talk of the horrors of individualism, of the word I. We use the word I too much, the swarthy man proclaims, his voice loud. Confident. The other man agrees. Unbridled individualism is reckless, he proclaims, even if one likes the right to smoke pot and shoot guns, to live in some rugged neo-Western dream.

With each word uttered, Tyler is filled with a kind of helplessness. He sees his own self diminished, sees his smallness as a Crazy Charles employee illuminated in their words. He is a piece among the machinery, the beer taps, pouring beers. He is one employee of many, washing, ensuring that the patrons buy, and Crazy Charles profits. And this is how these men probably view him, even though they ask him about his night, exchange a few occasional pleasantries. Pleasantries that are empty, that convey obligation, not interest.

Tyler tries to imagine their lives, while he pours a Fat Tire for another customer, an all-too-cheerful titian haired young woman. He thinks they might be Lotharios, bon vivants, things he is not. They are men whom the world has given much and they know this. They are men from decent families. people who have had their talents nurtured. The swarthy man seems to have a boyish enthusiasm and need to pontificate. This is a little out of place at thirty, Tyler thinks. At thirty, one needs to know how to keep a good poker face. His friend more measured, but still enthusiastic. This fellow, Tyler thinks, might know what it means to play one’s cards close to the vest, but even he is philosophising.

Tyler asks them if they need anything else, hoping to find the segue. The boys nod and wave. It is not meant to be rude, Tyler is sure, but the gesture conveys a kind of dismissal. Perhaps the men are just relaxed and not cognisant of things, but it fills him with a certain anger.

Tyler wants to tell them so much, the words threatening to slide from him as he turns away. He pretends to tend to the beer taps. He likes the ruggedness of individualism, likes having friends who work in jobs that tolerate, if not encourage it. One of his friends, Rufus Dupree, plays jazz piano at a bar. Another friend waves a sign for a pizza joint, dancing around like a jackass. All these things allow them to stay true to themselves, to wear the royal I like a crown. Tyler imagines using I in a sentence, to annoy Mr. DiCenzo. To annoy these men, even. And to try to establish some personal identification, even if his own particular I is still missing so much.

He utters the word, softly, the men not even noticing. They talk, they laugh, they drink, the swarthy man belching, which puts Tyler in an even worse mood. It is as if this belch conveys ownership and diminishes Tyler. He tries to convince himself this is silly, but they talk on. Tyler feels the calm facade crumbling. He feels the smallness growing, the sense that he has nothing to talk about with his own friends. These men have their own defined ethos, Tyler is the byproduct of a myriad of experiences, with nothing to tie them together except dysfunction.

The word common good is uttered. Common good, Tyler thinks, frowning. He picks up several beer glasses with a kind of severity. Sets them down with a thud. He stares at the men, knowing he can at least convey some small message through his glare. These men don’t know that common good is a fig leaf for a sort of oppression, that Tyler once sought solace in the ideal of the common good. Common good means check your brains, be a good, expendable employee. They do not know what it is to be part of this fever, this collective capitalistic mentality that plagues Crazy Charles, the pizza joint with the asylum-like walls.

Tyler wants to utter a snarky remark. He wants to expose these men, along with the other drinkers, for who they are. He wants to strip the pretence away. He stares, keeps staring, until Mr. DiCenzo asks him if there’s a problem, his moustache bristling like a porcupine. No sir, Tyler mutters, glaring at the men.

But there is a problem. He imagines scenarios, ludicrous, intense, the culmination of silence, subordination to Mr. DiCenzo. Tyler imagines fighting the two men, imagines overturning their beers. He imagines the swarthy boy flying over the bar, the look of terror. The loss of control, arms flailing, dangerous energies in the air. He imagines using the word “I,” as a weapon. He imagines bombarding them, inserting that “I” into every sentence, into their own orders for beer. He imagines becoming the central figure of this night, someone patrons will talk of with fascination. Admiration. Even the disgusted will find this action inherently bad ass.

Tyler imagines taking from their experience. He imagines telling them things about his life that will make them uncomfortable. He imagines demanding things, the men’s confidence evaporating, imagines them speechless. And above all, he imagines being the bartender who started a bar fight. He knows that he can have none of these things. Money, the need to survive, all these stop him from lashing out, although one day he might just do it. It frightens and pleases him.

Tyler imagines so much, standing behind the bar, that everything else seems to drift apart for this one small moment. The noise from trivia night, Mr. DiCenzo barking orders, everything is so far away. Tyler cannot help but smile, relish this. This, at least, is a bartender’s small consolation. The power to imagine. And no one can take this from him, not Mr. DiCenzo, not the pontificating men. He keeps imagining, letting his mind loose, even after the men bid him good night and disappear, stumbling into the beautiful autumn evening.