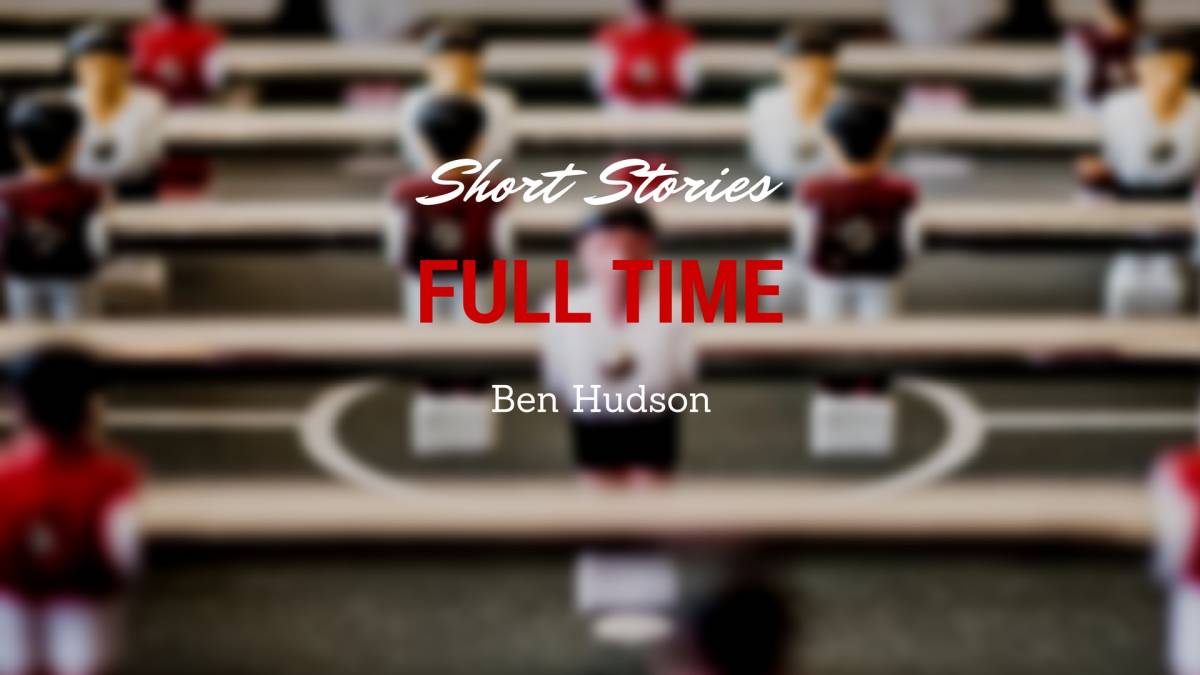 “Alright mate!” said Dave, unburdening him of his crate, and lifting it on top of the other three on the kitchen table. “Ready to finish a respectable third?”

“Fuck off, Dave, you saw that Heskey volley. You don’t stand a chance!”

“Oh come on guys,” said Kevin calmly as he wandered into the kitchen. “Remember the Accrington FA Cup fairy tale?”

“That was medium difficulty you cheeky prick” came Sam’s voice from the lounge.

Dave pulled the crate back up and rested it against his chest, before laboriously walking through to the lounge.

“8 men, 8 three and a half star teams, 4 consoles, 64 games, and 76 beers left. It’s time to feef!” he pronounced theatrically, to a thuggish cheer. “I organised this tournament to win ladies, to get ready to watch Hull top the table!”

“So with one round to go, the table is as stands: West Brom, Hull, Derby, Wolves, QPR, Leeds, Crystal Palace, and in last place Accrington Stanley.”

“Kev, you silly twat, why d’you always choose someone so shit?”

“A draw will do with one game left, Hull versus West Brom,” jeered Dan.

“But if you fail to win, then we play off for the title! Fancy another three one?” retorted Dave.

“You don’t stand a chance!”

“I’ve been practicing 10 hours a day for this! It’s my destiny!”

“Get a job you lazy bastard!” shouted Dan to a chorus of sniggers.

“Your wife called, she said fuck off!”

“Smooth comeback! At least my wife made it to the wedding!”

Dan looked around at the lads, smiling widely, but there was nothing but awkward eyes darting round the room. Dave was staring at his feet.

The room erupted into cheers.

“Play the final seven matches, and we will end the night on the title decider! This title is genuinely the only thing left in my life, so don’t expect me to let it go easily. Game on!” Yelled Dave. He looked pumped up on the outside, but inside, the fragile scaffold of his being quivered with nervous fear. He couldn’t lose. He couldn’t take another defeat. Neither in the tournament, or in the admission of fear. He had to win.

“With 70 minutes played the score is tied at a tense two-two. After Hull’s early surge West Brom really came back into the game, but Marney’s penalty pulled the Tigers back level. Was it a penalty is the big question? Your thoughts, Clive?”

“Kev, will you please stop with the fucking commentary while we’re playing,” yelled Dan.

“Beer break at the next throw in?” muttered Dave.

The pair of them sighed as their tension broke. Their eyes ached as they looked away from the screen to find the beers.

“I’m gonna get Elmo playing higher up the wings. It’s make or break.”

“Elmo drags the ball across, and there’s Snodgrass! It’s 3-2! Hull have done it in the 89th minute! Incredible scenes! Stunning header!”

Dave leapt from his seat and stared up at the ceiling as he was embraced. He had won. He had finally won. After six months of endless defeat, he was victor.

“Sit down and buckle up for stoppage time. This isn’t over!”

He dropped into his seat, and dived back into the match.

“Ref looks at his watch. Surely there can’t be much left. That’s an unfortunate deflection, and Albion have a corner. Surely the final roll of the dice.”

“He plays short to Fletcher, he whips it in, cleared by some Hull defender, it comes out to Berahino, he controls, he strikes. What a goal! An astonishing strike!”

“Sorry mate. You gonna be ok?” asked Simon, as he went to the door.

Dave nodded and shut the door behind him. He went through to the lounge, and sat amongst the cans and bottles. He put his head in his hands, and began to weep. He had nowhere left to go.