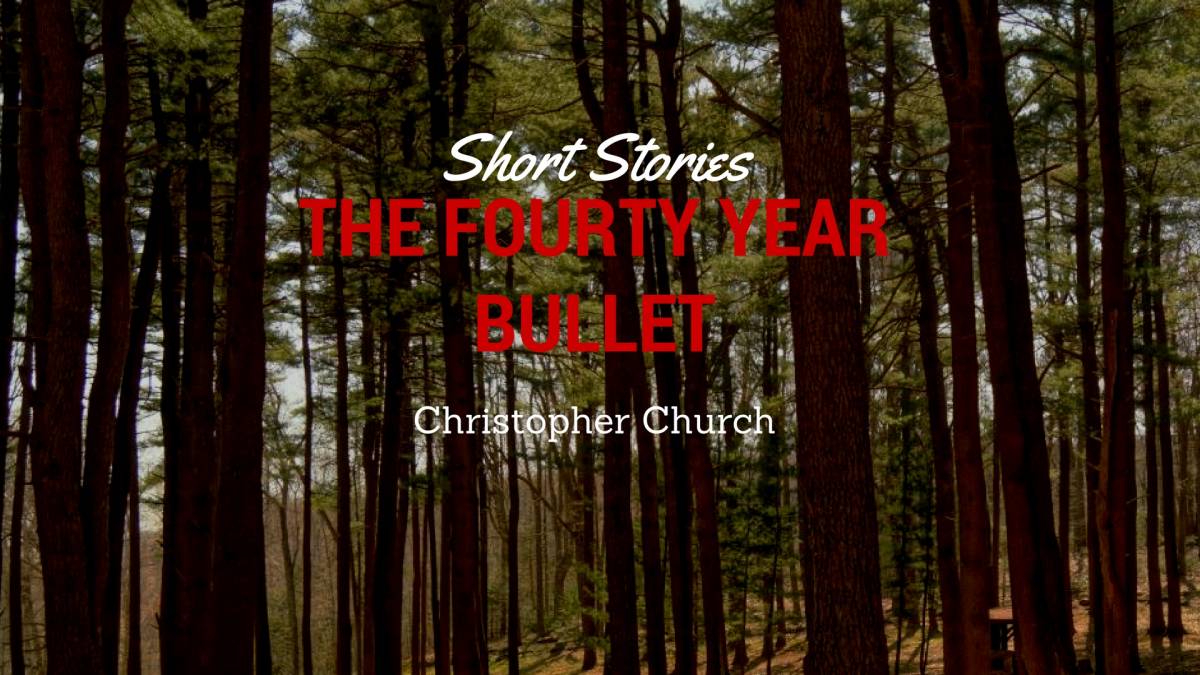 Amy’s groping her hands all over my body, and then she’s putting a gun to my head and rattling off her usual dogma: “You aren’t what you own; you are only your actions”. Of course, no one but her understands what the hell she’s saying. All the while I’m wondering how the gun would sound from the muzzle end of the barrel. Not that it would matter, if in the event psycho-girl here actually pulls the trigger. Boom, then you’re dead. That’s how fast things can change; in one minute, you’re walking and talking, then in the next you’re cold fertilizer, zombie buffet. So, we’re standing here in the middle of some godforsaken forest, Amy’s hand trembling with the gun, but whether from fear or anger I can’t tell. I’m on my knees in the muddy mass of leaves and soil and animal waste, with the barrel of the gun now shoved deep into my cheek. Despite our private little affair, the world around us is serene. The high peaks of the Alaskan mountain range seem to scratch at the heavens, and the sporadic calls of birds emanate from the tree tops. The entire planet is blissfully unaware of the animosity in the air.

They say women always kill the ones they love; I guess I didn’t get the memo. If Amy pulls the trigger, the round loaded into the chamber would meet with my skull at 857 miles per hour, and considering there’s only about one town within twenty-five miles of here, she’d probably get away with it. With all this waiting around, I’m actually hoping she does fire off a round into my brain stem. And then she does. The Earth seems to tremble from explosions that erupts from the barrel, and in my last moments of consciousness I catch a glimpse of her platinum blonde hair, sprayed red with what I think is blood. These were my final moment on planet Earth, my final breath, my final thoughts; proof of just how quickly your life can change, or in my case, end.

I awoke, half-naked and numb all over. With a timidness only present in small children, I rose to my feet, my joints and muscles aching from stiffness. My clothes were all missing, save for my undergarments, a t-shirt and boxers. My shirt was stained black with streams of dried blood and my hands quickly shot up to my face at the first sight of this; searching every inch of my cranium for a gaping wound. Only a rough section of skin on my cheek stood out as unusual. I’m not dead, and there’s no hole in my head. I thought back to the moment where she pulled the trigger. Did she miss? Was the gun even real? It didn’t matter. I was alive, and the woman I had once loved was nowhere to be seen. This meant I had a twenty five mile hike back to civilization.

I won’t describe the journey back, as it doesn’t well relate to the story. But, you ask, where exactly “back” is? Anchorage, Alaska. Where I was born, raised, and where I nearly died by the hand of a two-faced, deranged woman I thought I loved. But the Anchorage I knew was no more. The faces were different, the roads had changed, and the rows of buildings I had once passed everyday no longer seemed familiar. The first explanation that came to mind was that the extreme anxiety I had just endured must have altered my perception. Yes, I told myself; that must be it. I concluded that if I found Amy, she could clear up this mess with the truth. “The truth will set you free”, more of Amy’s ridiculous dogma, dogma that I was now conceding to. So, with my newly found convictions, I set about to find the very person that nearly ended my existence.

Despite all the “changes” that I can’t seem to recall taking place, Anchorage was still a small town; and tracking down people was a fairly simple task. Asking around town, people pointed to an old, run-down shack on the outskirts of town. However, I still cannot get past the odd facial expression of the townsfolk. Some acting as if they were in the presence of a ghost, others as if they had forgotten something important, but what it was simply eluded them. Shrugging off the strangeness of the day, I headed toward the old shack, hoping to find some solid answers.

Upon arriving, I instantly noticed a woman, sitting solemnly upon the front porch, shotgun resting in her lap. As I approached, the woman became incredibly pale. Her sagging skin seemed to come alive with expression, her lips were no longer visible, drawn deep into her mouth, typical for a woman of her age. Her sullen eyes, sunk into their sockets opened wide with such a fear that I thought she may have a heart attack. “Ma’am, does Amy Strassler reside here?” I said, giving a meek smile. I took note of a dull pain that presented itself every time I attempted to smile. The woman looked hard into my eyes, as though she had stared into them a million times before. There, as we stood, eyes locked, I finally understood why such an expression had claimed her face. SHE was Amy. This old, haggard woman was the same that had shot me only hours before. She opened her mouth to speak, but the words would not come forth. The only audible thing she could mutter was “forty years…”

Then, the truth came to my mind, as quickly as the bullet that had passed through it. The rough section on my cheek, scar tissue; the town’s changes, the forty years I laid, sleeping. Not to mention, the years of aging that plagued Amy’s appearance. I finally understood everything, and without the slightest warning, Amy drew up the shotgun residing on her lap, and with the racking of the charging handle, my life ended, once again. As they say, women always kill the one’s they love; even if it takes forty years to finish the job.