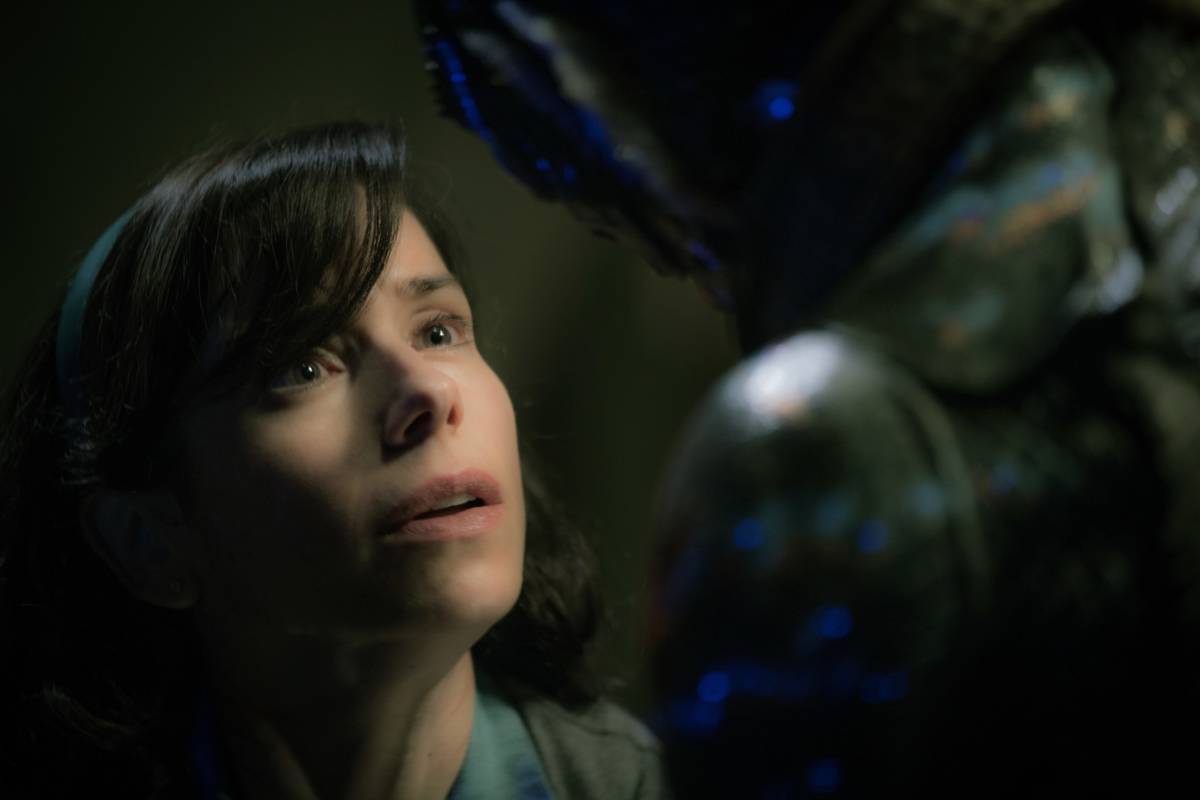 The Shape of Water is perhaps the finest film ever to be directed by Guillermo del Toro and actress Sally Hawkins delivers a top-notch performance in the Cold War-set film.

What del Toro is doing now as a director is to make the films that were expected from the likes of Tim Burton at one time. The director, who co-wrote the script with Vanessa Taylor, is able to get some marvelous performances from the cast.

It’s Baltimore 1962 and Hawkins stars as Eliza, a mute janitor working at a government laboratory where agent Richard Strickland (Michael Shannon) is hellbent on discovering how a classified asset (Doug Jones) will change the Cold War, for better or worse. Upon cleaning up a bloody mess with fellow janitor Zelda (Octavia Spencer), Elisa is drawn to this mysterious creature and a love story blooms from this discovery.

When she’s not working, Elisa lives in her apartment above a movie theater where she’s neighbors with artist Giles (Richard Jenkins). Giles lives through watching musicals on television now that the once-aspiring painter can’t make a living through painting. It’s once he meets the creature that he’s able to get the drive back into his life to do the thing he once loved.

The love story between Elisa and the creature is one of the most beautiful love stories depicted on screen and it comes on the heels of the 20th anniversary of Jack and Rose’s epic romance in James Cameron’s Titanic. Neither of two characters talk so all of their performances come through best through their body gestures.

Say what you will about Shannon, he’s absolutely phenomenal in this villainous role where one almost feels bad for him because of the era. There’s just a single major gripe about Strickland as a character and it’s a pretty big one. There’s a scene early on where Strickland is seen washing his hands before going to the bathroom, only to leave after doing his business without washing his hands. For Strickland, he believes “a man washes his hands before or after tending to his needs”, but to do so both times would be seen as a sign of weakness.

Alexandre Desplat’s score for The Shape of Water is one that only adds to complement the film’s beauty. The score flows with the camera movements from cinematographer Dan Laustsen and adds to the love story. There’s so many complex layers to the characters and the music doesn’t force any of the emotions on us because those emotions are already there. Desplat makes the decision to go waltzy for Elisa’s theme and flutes for the mysterious creature. It’s the punctuation on top and serves to add to the film’s beauty.

Laustsen’s own cinematography choices aren’t technical choices but ones that play up the film’s emotional tone. Using the Arri Alexa digital camera with Arri/Zeiss Master Prime lenses, the fluid camera movements really come through in the picture. It’s especially important when the leading characters don’t talk as they convey their action through body gestures, like Elisa’s love of tap dancing.

Drawing inspiration from the classic monster films, there’s a mix of everything in The Shape of Water including romance, musicals and noir, not to mention the amazing visual effects in the film’s prologue. Throw in the backdrop of the Cold War, Space Race, and Civil Rights movement and it’s a heck of a period for del Toro to set this beautiful and stunning cinematic masterpiece.

Fox Searchlight opened The Shape of Water in New York starting December 1, 2017, with a theatrical expansion rolling out starting this Friday.  The nationwide release is expected on December 22, 2017.