SAS: Rogue Heroes is not even slightly ashamed of being action-centric. 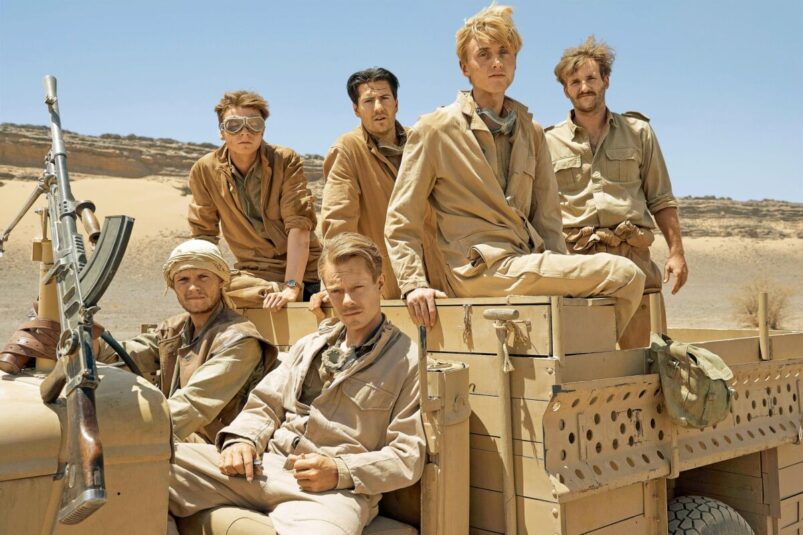 It’s hard to imagine a group better suited to become the next focus of Peaky Blinders creator Steven Knight’s creative gaze than the founding fathers of the SAS. Based on Ben Macintyre’s wartime history of the same name, the idea of a charismatic assembly of hyper-masculine hellraisers playing by their own rules against the orders of the established orthodoxies has obvious parallels with Knight’s most famous work.

Set initially during the spring of 1941 as the Allies’ grip on the North African supply line was becoming increasingly loosened by the wits of Field Marshal Rommel, Rogue Heroes depicts the early days of the newborn Special Air Service as they look to more clandestine tactics in the hopes of undermining the Nazi advance towards Tobruk and, most importantly, the Suez canal.

Central to this rag-tag bunch of roguish soldiers of fortune are Jock Lewes, a stiff-necked curiosity of a man who sports the stiff, pallid complexion of a haunted Victorian schoolteacher, Paddy Mayne, a Northern Irish maniac with such a combustible temperament he could start a fight in an empty cell, and David Stirling, a deranged, almost mythical Scottish aristocrat played peerlessly by Connor Swindells clearly having the time of his life as he swaggers about half-drunk in aviator shades with an insane gleam in his eye, peppering every other sentence with all possible variations on the word “fuck”.

The first episode’s opening salvo is quick to warn us of the show’s fast and loose relationship with the stories it so keenly recounts. “Those events depicted, which seem the most unbelievable…are mostly true.” It’s a slightly irritating primer for those of us who prefer to be shown rather than told, but sets the stall out early and eagerly: disengage your brain, stop worrying whether these things actually happened, and enjoy them when they do. The line between fact and fiction has become blurred by the hot glare of the African sun, obscured by the boom of grenades and the thunder of gunfire.

SAS: Rogue Heroes’ central players are unquestionably watchable, although their likeability depends on your predisposition to empathise with such morally contradictory characters. In the real world, you could be stranded on the other side of the Libyan desert and still feel that you were in too close proximity to such a ragtag band of psychopaths, miscreants and merciless killers.

Each man possesses his own superficial characteristics for the sake of differentiation – posh, strait-laced, Christian, alcoholic, Northern Irish – but the single underlying trait that tethers the team together is that these are men all bound by a common indifference towards human life and a callous disregard for their own, and everybody else’s, safety. The “Heroes” part of Rogue Heroes is presumably supposed to be taken with a dune-sized quantity of salt.

Not that the writers don’t attempt to give their protagonists some dimension outside the capacity to fire out expletives or gun down Nazis. Vignettes of past lives and dreams now held in limbo by the war’s intrusion go some way to humanising an almost inhuman band of charismatic reprobates, as do frequent references to the trio’s interests before the outbreak of war. SAS: Rogue Heroes has an almost forensic obsession with the maniacal mood swings of tortured soul Paddy Mayne, brilliantly depicted by Jack O’Connell, but the writers manage to hint at just enough nuance and complexity to keep the explosive Irishman from becoming a reprehensible and tiresome self-parody.

The need for deeper characterisation from a narrative still dealing with the most destructive event in human history is obvious, but when a show starts one of its episodes with a Motörhead wrestling theme, it can sometimes undermine the capacity for us to take it seriously. This is cake and eat it territory, and although it’s hard to blame the writers for wanting to add some texture to the blank moral canvas of the North African deserts, the effect is occasionally tonally jarring.

SAS: Rogue Heroes is undoubtedly at its best when it ditches the moral uncertainty in favour of guns, knives and a few surprise hand grenades, committing fully to indulging its Boys’ Own fantasy fulfilment and casting questions of morality, ethics and human decency firmly to the side. The narrative takes a while to get going and occasionally becomes bogged down in the vast wastes of the unforgiving African desert, but when in full flow it’s hard not to be captivated by the effect.

Mainly thanks to Stirling’s public schoolboy bravado, there’s simply too much naked charisma from the primary trio to pull things through, and while it may all be totally superficial, this remains a project built predominantly on spectacle and showmanship. Much like its titular unscrupulous innovators, Rogue Heroes is flying by the seat of its pants pulling off a trick that has as much to do with bluster and belief as it does thoughtful or forensic consideration.

Not that there aren’t diversions and japes aside from the thrill of the chase to keep audiences from developing a vicarious feeling of battle fatigue. Dominic West’s eccentric and eminently hateable Lt. Dudley Wrangel Clarke provides a useful sparring partner for Stirling as the man who originally conceived a phantom squadron to put the willies up the Kaiser, as does Sophia Boutella’s enigmatic (and entirely fictitious) spymaster Eve Mansour. Like the best wartime thrillers, Rogue Heroes keeps you guessing as to its characters’ true intentions. Whenever the action bounces back to Clarke, Mansour or the suits of GCHQ, we, like Stirling, are never sure as to the motivations lurking behind their false grins and seductive smiles.

None of this is to say that SAS: Rogue Heroes isn’t funny. Thumpingly over-the-top graphics, pounding heavy metal and uber-masculine men having their jollies in the hot sun might sound like being stuck on the worst Benidorm holiday of all time, but it’s hard to be po-faced about the caddishness and laddishness as the nascent SAS bungle their way through their latest string of barely believable adventures.

The fifth episode in particular, which sees Stirling and co. attempt a raid of Benghazi with Churchill’s son Randolph in tow, portrays a mission so ill-conceived and farcical it’s like something from Inglorious Basterds crossed with ‘Allo ‘Allo! A moment in which the team, disguised as Italians and Germans, slip back into British habits by driving on the wrong side of the road elicits a laugh because it’s so at odds with the hyper-efficiency we normally associate with an elite fighting unit.

As the sun-bleached squad bungle their way through the Libyan city, unshaven and unkempt, we realise how little thought has been put into the ludicrous escapade. “They’re looking for Germans with beards,” one member quickly realises. “Yes, on reflection, terrible idea not to shave,” replies Stirling with the nonchalance of a man who forgot to buy a pint of milk from the corner shop. How can you not end up rooting for such a bunch of endlessly endearing dickheads?

That’s the trick of SAS: Rogue Heroes: it’s (almost) as much fun as the constant flashy visuals and promises of authenticity prompt you to believe it should be. The action sequences, while still a little restricted by some rather televisual production values, feel alive and intense, and even when the momentum slows amid the dusty wastes of the desert sands, there’s enough internal sparring and competitive dick-swinging (mainly courtesy of Mayne and Stirling) to stop things from sinking.

SAS: Rogue Heroes delivers on its promises, and much like the men it lionises, it’s fun, flashy and can draw on endless reserves of self-confidence, bravado and derring-do to get itself out of trouble. Your reaction to the “heroes” themselves may depend on where your own moral compass sits, but love them or hate them, Stirling and his team are rarely boring to watch. 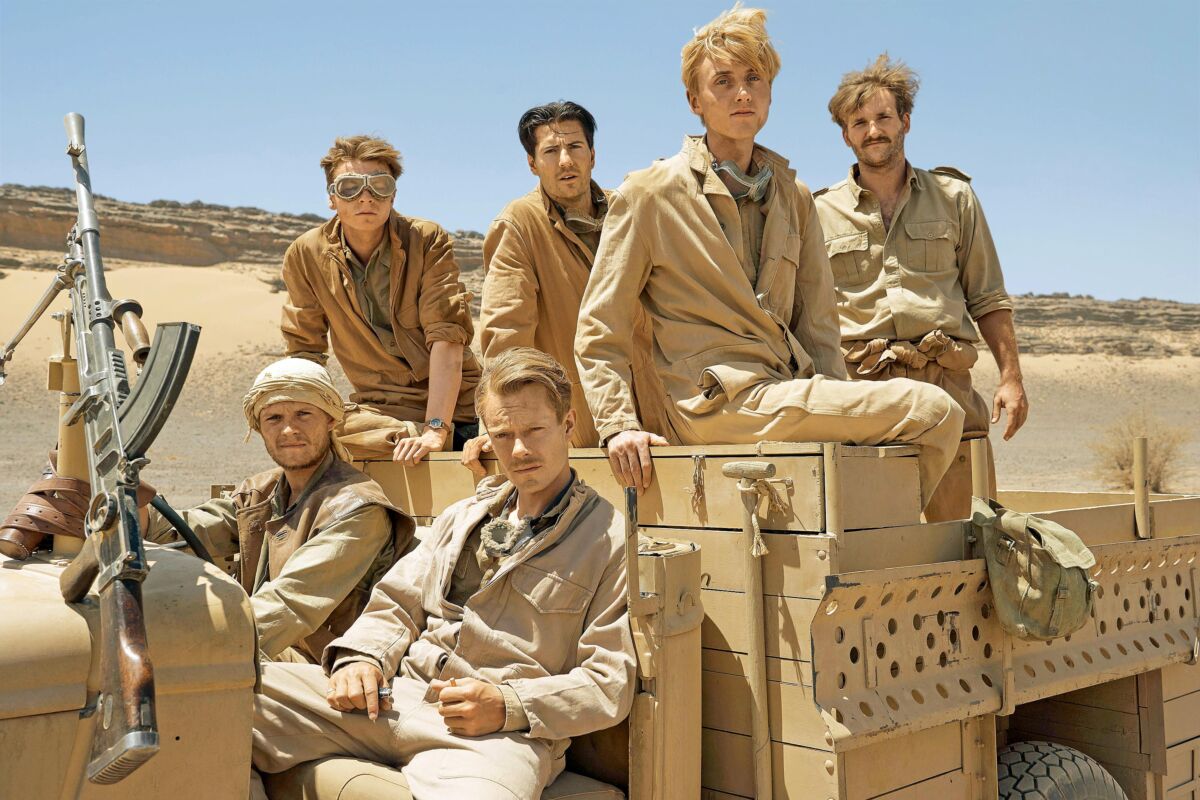 Verdict
A Boy’s Own adventure yarn that excels when indulging its most absurdist tendencies, Steven Knight’s retelling of the birth of the SAS heartily embraces its subject’s motto: Who Dares Wins.
8
Cultured Vultures is a pop culture website established in 2013 covering all things gaming, movies, and more. We eat your words.
All The News On The Biggest Games