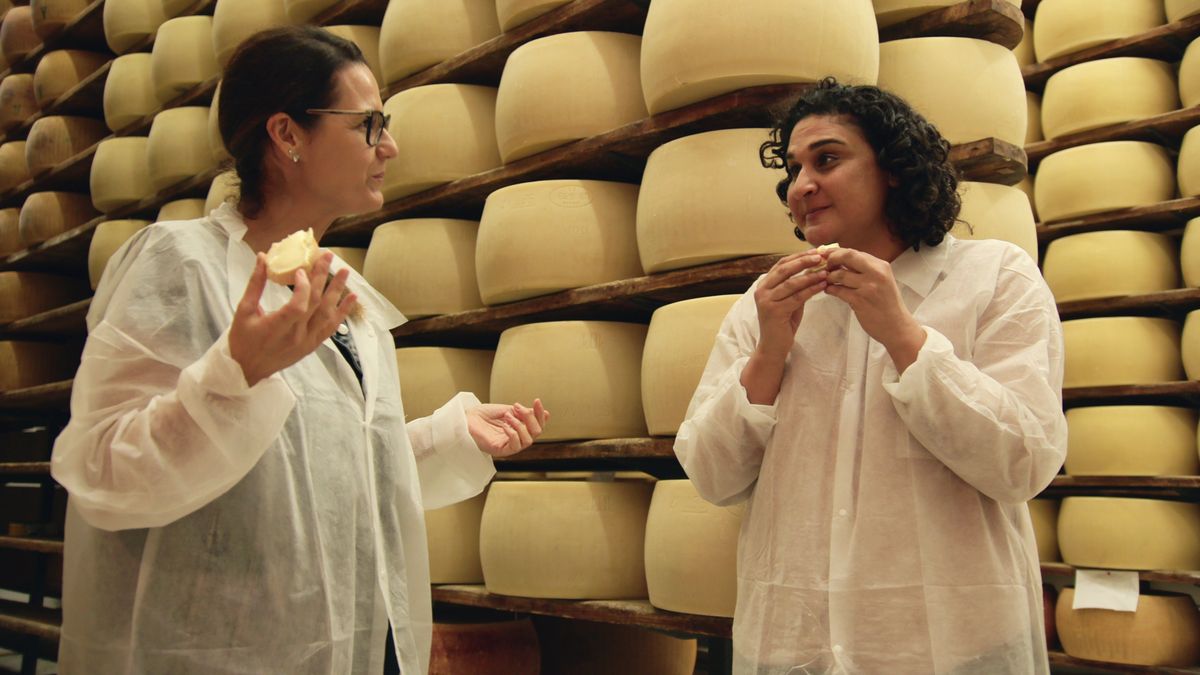 The Curious Creations of Christine McConnell is a show that Netflix was positively insistent that I watch, with her show dominating the auto-play banner trailers for most of the month. Ads are of course targeted in this day and age, so she may not appear for everyone, but I thought it a shame that the far superior Salt Fat Acid Heat nearly fell into comparative obscurity – I only chanced upon the show on my girlfriend’s Netflix selection.

TCCoCM is indeed curious, as it is a show that doesn’t seem to fully know what it wants to be. It is, on the surface, a baking programme. Unfortunately, as a baking programme, it isn’t a very good one. As Christine describes the confectionery she is about to attempt, she talks over an image of the “recipe”, but no measurements are given. Now, I am under no delusions that I would ever attempt to sculpt an entire buttercream mansion, but this rather glaring omission spoils whatever illusion this show might have of being useful. Her very first recipe – “bones” made from white chocolate-covered, peanut butter-wrapped pretzel sticks – sounds like a delicious idea, and when she breaks out the airbrush to add some shading to the sweets, it showcases Ms McConnell’s meticulous attention to detail and talent. However, when she describes the peanut butter “clay” she uses to sculpt to bones as being an “easy to make” mix of peanut butter, butter, and other things, it would be nice to know how to make it.

Later in the episode, she makes a replica of the gothic mansion the show is set in – the mansion is made from sponge cake, and McConnell makes pretentions of giving useful advice to those attempting to make the beast, with mentions of dowel rods and supports, etc. She then produces a “here’s one I made earlier” type, that I at first assumed was some sort of fibreglass mould to layer the cake on and act as support, until I later realised was an entirely buttercream covered “cake”. How the hell did she make the porch? It’s not the only time the show is guilty of conveniently skipping over one of the hardest bits: in episode 5 she makes a cake replica of her raccoon companion – an episode which is tediously drawn out by the companion nearly discovering the surprise.

One of these interludes give the show the excuse to jump from in progress to finished product – given the amazingly fluffy looking fur on the finished product, again, it would be nice to know how it was done. Coconut shavings perhaps? An earlier episode had her making a smaller werewolf companion out of rice crispy “dough” (again, a recipe that would be nice to have), where she makes some good “fur” out of modelling chocolate, so did she do the same here? It is annoying to have to guess, especially as the episode is so diluted with the antics of her animal companions.

Christine McConnell is joined in her gothic mansion (spooky on the outside, domestic bliss on the inside), by two puppeted familiars. A raccoon she supposedly resurrected from a trash compacter, and an old Egyptian cat whom she also brought back to life. The cat likes to point out it was once revered as a god, and has a familiar persona (and voice) to Salem from Sabrina the Teenage Witch. The raccoon, “Rose”, is just whiny, entitled and irritating. They are soon joined by a werewolf (every bickering twosome needs a third to balance them out – it’s sitcom 101). With these extra characters this “baking” programme picks up a semblance of plot. I wondered if there’s perhaps a standard clause of a Netflix show contract that the programme needs a certain degree of “bingeability”, and TCCofCM tries to inspire that “just one more” mentality. The episodes are quite short and easily digestible (pardon the pun), so the mild curiosity that may arise from the questions the plot present could be enough to allow that autoplay to do its thing.

The show is, in a word, campy. The kind of camp where horror is an aesthetic, deployed to help you pull off old school dresses and heavy eye shadow. The inherent campiness in a woman in perfect makeup half-heartedly scolding her puppet minions for trying to decapitate the neighbour…like most camp things, it is easy to enjoy ironically. Now, as the Netflix trailer points out, Christine is indeed beautiful and talented – it doesn’t do a bad job of scratching that odd itch we seem to have of wanting to salivate over food we will never eat. Or, indeed, if you are the type that obsessively watched arts and crafts videos on Facebook, this may be up your alley.

For sheer appreciation of food, however, Salt Fat Acid Heat is by far the superior show. A still from the show shows the host, Samin Nosrat, cross eyed as she holds a gelato inches from her face, which is lit up with the childish glee of the expectation of ice cream. It reminded me of a Pixar character, and she is just as endearing. Passion is contagious, and Samin is nothing if not passionate about food. As she points out in the introduction, Samin has boiled down good cooking to the titular four components, and she travels across the world to visit cultures she deems masters of those particular elements: Japan for Salt, Italy for Fat, Mexico for Acid, and, since it would be impossible to name a culture the best at using heat, she stays home in America for the final episode, which features an endearing moment where she makes rice with her Iranian mother.

In Italy, Samin delightedly samples gelatos, visits producers of parmesan, curers of ham, and learns to make focaccia. When she samples cheese it is a vicarious pleasure all in itself — you can almost taste the umami tang of the parmesan. To be honest, I’m getting quite hungry just thinking about it. Samin’s Iranian heritage isn’t obvious, as she speaks Italian pretty well. I think speaking the native language is always a good quality to have in a host – she makes a pretty good attempt at Spanish too, and we will of course forgive her for not knowing Japanese.

Samin has a joviality that puts those around her at ease, and her frequent laughter instils the show with a certain joy. It is, after all, a celebration of food. When the show breaks away from food itself, it is to indulge in gorgeous shots of her surroundings – the aim of the show is to compliment food, and this succeeds in that beautifully. Each episode of Salt Fat Acid Heat ends with Samin hosting a small dinner party, with food chosen to power of each titular element. For the final episode she brings her close friends over and involves them in the process of preparing the meal. As anyone who may have helped prepare part of Christmas dinner as a child can attest, it does instill a sense of pride – “I made that sauce” – which makes the food even tastier. We are all capable of making good food, and a little effort can go a long way (You ever put slices of chicken breast in with your instant noodles? Game changing).

Christine McConnell’s show is also a celebration of the power of food, but in a different way. Where Samin would make a delicious guacamole with just the right amount of seasoning and zest, I imagine Christine would prepare a guacamole sculpture of a Mexican with a taco hat and jalapeno eyes. All of Curious Creations also end with some sort of elaborate spread, panning over cupcakes and such that were not featured in the body of the episode – it is, bluntly, aesthetics over flavour. Nonetheless, it also preaches the power of a bit of effort. It is more tongue in cheek – I literally laughed out loud when her cake mansion (5 hours work, minimum) gets destroyed and she calmly declares “It’s ok, I always make a spare”. When she presents a gorgeous gift basket full of handmade candles and chocolate goodies as an apology for her neighbour almost being murdered, they joke that it’s hardly adequate for the crime, but if you received something like this from a friend that had so much care put into it, it would be hard not to forgive any slight.

I am lucky enough to be blessed by a friend who also puts on elaborate dinner parties, and it is a wonderful way to show love. The sheer time and effort that is put in, casing guests to exclaim “you made all this?” – it’s a lovely gesture to receive. It’s a cliché at this point, but food brings people together. If you plan on hosting an actual dinner party with real friends, which I can’t recommend enough, Salt Fat Acid Heat is essential viewing.