In this episode, we learn that hell hath no fury like a woman scorned - and that communication is key in a relationship. 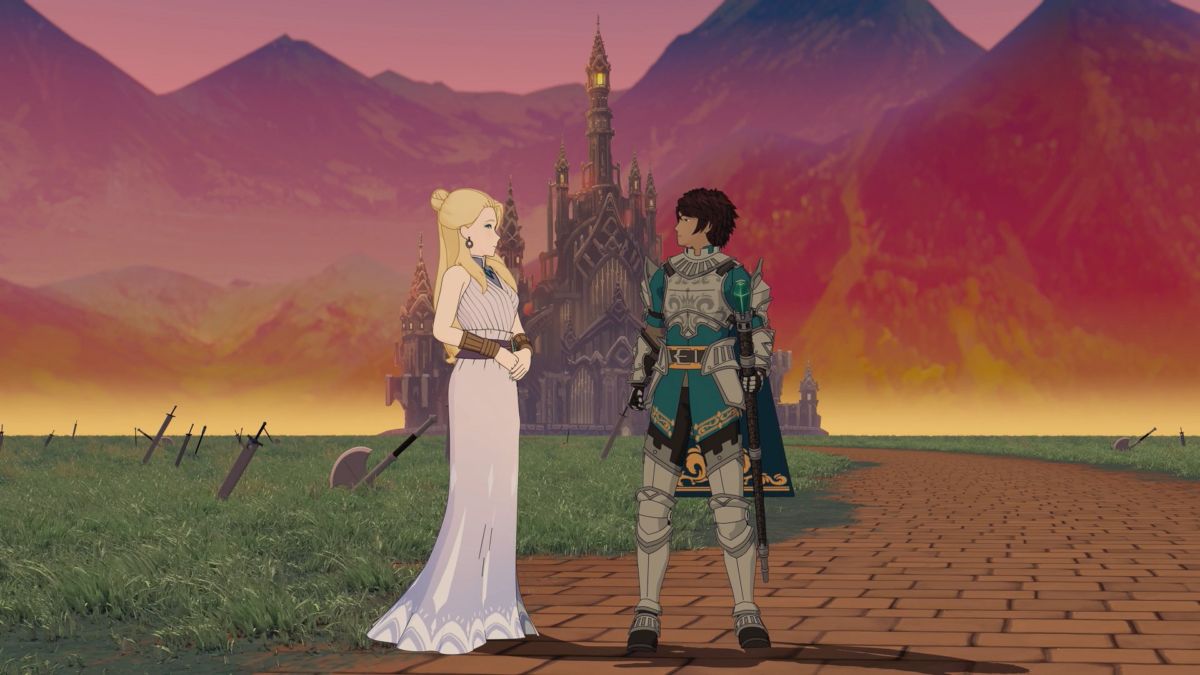 While the first two episodes of the sixth instalment of RWBY were good, ‘The Lost Fable’ is verging on excellent. One of the key themes of RWBY is mirroring fairy tales, and this whole episode plays out as a self-contained short story, painting a clearer picture for the overall plot and adding to the universe’s lore. At twenty-six minutes long, it’s the longest episode of the volume so far and there is a lot to talk about.

Obviously, spoilers ahead for RWBY.

‘The Lost Fable’ starts off with Salem living alone in a tower, Jinn explaining to team RWBY and the audience how she was ‘locked away by her cruel father’, and she desired only freedom. Within the first sentence of the episode, it already gets interesting, because it’s impossible to ignore the similarities Salem shares with one of the main characters, Weiss Schnee. After all, if you go and re-watch the white trailer, the first lyrics of the background song are: “Mirror, tell me something, tell me who’s the loneliest of all?” Is Rooster Teeth trying to hint at a story arc where history repeats itself?

The story goes on to explain how a legendary warrior known as Ozma braves the tower and rescues Salem not for her hand like many champions before him, but only ‘because he fought for righteousness’. Ozma and Salem escape the fortress and fall in love, with Salem finding the freedom she yearned for in Ozma, while Ozma sees someone worth fighting for. Jinn goes on to explain that it should have ended with a happily ever after. However, Ozma falls ill and ends up dying, leaving Salem abandoned and heartbroken. Consumed with loss, Salem first goes to the god of light, begging him to bring her lover back to life. Though he pities her, the god denies her wish, telling her that life and death are part of a delicate balance and she should let him rest.

Salem uses her immortality as an opportunity to strike out against the gods who had wronged her. She goes on to travel the kingdoms of men, telling them how she stole the power of immortality from them, inviting any swordsman to try and cut her down, and offering immortality to any man who joined her cause against the gods. A cool Easter Egg design choice is that one of the kings Salem rallies has a very similar design to a Dothraki from Game of Thrones. Something cool for fans to pick up, or are the two fictional stories from the same universe? Perhaps a bit of a long shot in terms of the latter, but an interesting decision from the designers.

Salem’s revolution doesn’t last long, as the god of darkness wipes out all of humanity in a single attack, leaving Salem all alone. Some of what goes on in this scene has intriguing points to bring up, the first one being when the god of light describes the planet as ‘a beautiful experiment’ while additionally calling the planet ‘a remnant of what it once was’. While the audience finally understand where the planet got its name, it is also implied that the gods have done this with other planets. The gods leave dramatically, giving birth to the universe’s iconic shattered moon in the process.

Wandering the planet alone, Salem eventually finds herself in the dark god’s land, now abandoned. Consumed by her hatred of everything, she throws herself into a pool of dark energy, thinking ‘if the fountain of life granted her immortality, then surely the pools of Grimm would finally take it away’. Since she can’t be killed though, all it succeeds in doing is turning her into a corrupted being that yearned for destruction, turning her into the antagonist we are all familiar with.

In all this chaos, the god of light offers to bring Ozma back from the dead as the protector of Remnant. He promises that though humanity has been wiped out, it will rise again but will only be a fraction of what they once were without the influence of the gods. He also leaves behind the Relics with which he based his ideals for humanity on, hoping that man can use it to eventually remake themselves. The god explains to Ozma that if the relics are brought together, the gods will be summoned to judge humanity. If humanity puts aside its differences and they stand united, the gods shall return to live among them and ‘humanity shall be made whole again’. However, if they fail, humanity will be wiped from existence. Sounds easy enough, right?

On top of all that, until the gods return, Ozma will be forced to reincarnate, sharing souls with men over different lives. Ozma denies the god his wish at first, wishing to return to the afterlife to be with Salem. The god tells him that though Salem still lives, she is not the woman he once knew. Ozma agrees and finds himself reborn in a land different to what he once knew: man is divided and can no longer perform magic like the once used to, and a species called the Faunus have appeared and are locked away like animals, despite looking human. Going back to the observation of the god’s appearance, a theory as to how this happened is that perhaps before abandoning humanity completely, the gods created the Faunus in their own image to test humanity.

Travelling the world, Ozma hears whispers of a woman called The Witch, a woman who has the power to control dark magic. Figuring out that it’s Salem, Ozma goes to confront her to see what has become of her. However, upon seeing each other, they recognise and fall in love with each other all over again. They tell the other what has happened since they last saw each other, but Salem blames the end of the world on the gods for fear that Ozma would reject her, and Ozma keeps his task and the relics a secret, unsure about the truth. Though Ozma seems to have found happiness once again, humanity seems all the more divided. When he brings this up to Salem, she tells him that of course it would be, the world is literally godless. She offers him the opportunity to rule them as gods, to unite humanity and create a paradise the old gods never could.

Taking up her offer, the two rise up and eventually grow to be the rulers of a prosperous kingdom, and birth four daughters together, daughters we later find out can control magic like their parents. Are these the first maidens? Ozma grows all the more doubtful of how he and his wife are doing things and tells her of the true reason behind his reincarnation. Salem almost disregards these words, telling him that they can replace humanity. Truly believing the woman he loves to begone, Ozma tries to escape with his daughters, but Salem attacks him and almost kills him. Separated from his family, Ozma continues to live many lives, a lot of them spent morning and trying to forget his task. Yet, no matter what he does, his mind always comes back to the task at hand. No matter how many lives he lived, Salem’s presence is always felt, leading to the only logical conclusion: Salem had to be destroyed. He knew he couldn’t do it through mortal means, so he seeks out the relic of knowledge, asking Jinn his three questions: where are the other relics? What powers do they have? And how do I destroy Salem? ‘The Lost Fable’ ends with Jinn poignantly answering him with a simple ‘You can’t”.

While ‘The Lost Fable’ is filled to the brim with the kind of story telling that makes RWBY so enticing, there are a few things to note: first of all, the relationship Ozma and Salem share illustrates exactly why you shouldn’t keep secrets from your partner. Secondly, out of all the people the gods could’ve chosen to bring back to be the protector of their world, why Ozma? It does make it more emotional from a narrative stance, but Ozma is described as a hero for justice, so why reward him by bringing him back to fight the woman he once loved more than anything? Also, why did the gods spare Salem instead of destroying her altogether? Is one person’s pain as punishment really worth that much? Maybe the gods are just dicks. Also, why did Ozma change his name to Ozpin? It was clearly to hide his identity, but is Ozpin that much a leap from Ozma? Additionally, all the way back in Volume 1, we saw Blake reading a book about a man with two souls, so Ozpin isn’t as much of a secret identity as he thinks he might be.

The writing in ‘The Lost Fable’ is remarkable. From beginning to end, the audience are given an episode that works great as a standalone, fairy tale style story, while breathing more life into the main storyline, giving an answer to how everything started while making the conflict all the more tragic, revealing new angles on the protagonist Ozpin and the antagonist Salem. It also leaves the audience on a hell of a cliff hanger, making team RWBY’s mission all the more complicated while encouraging us to keep watching the show to see how they could possibly win against a seemingly unstoppable force.

Verdict
A lovely self-contained story that explains one of the central conflicts of RWBY.
8.5
Cultured Vultures is a pop culture website established in 2013 covering all things gaming, movies, and more. We eat your words.
All The News On The Biggest Games