Rust Easter Egg Event 2021: What You Need To Know 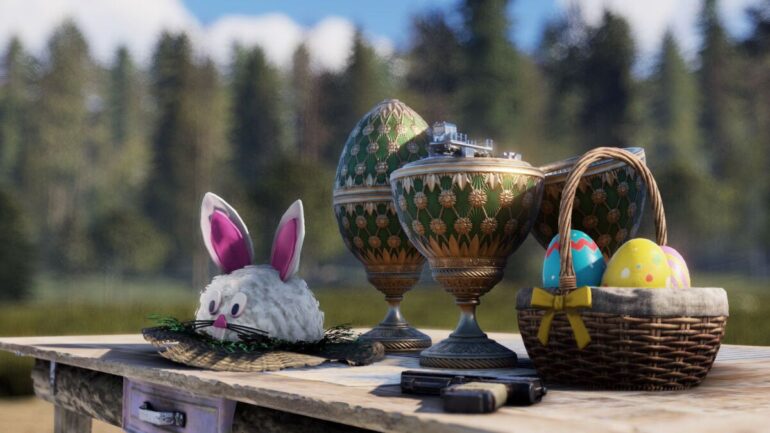 As has become tradition, Rust is holding its own twisted Easter Egg hunt in-game this year with players rushing to collect the most eggs in amidst the regular warfare that is the Rust experience. It’s chaos, and just kind of feeds the general chaos even more with nakeds able to get their hands on good loot.

Available from April 1st, 2021, the Easter event in Rust will see players running around the map and collecting eggs with prizes for those who collect the most. Here’s everything you need to know become the ultimate Easter chad in Rust this year.

How Does The Easter Event Work In Rust?

Once every in-game day, an egg hunt will kick off with players having three minutes to collect as many eggs as possible. The top three players who get the most eggs receiving special eggs for their efforts. Once cracked open (just press “open” in your inventory), they will give players all manner of loot, including powerful weapons like the M249.

Even if you don’t win the hunt, you can still get some pretty good loot. Ten of the normal eggs can be upgraded into bronze eggs, which can then be upgraded into silver, and finally gold eggs for the best loot.

To be clear, the chances of getting an M2 are fairly low so everyone won’t be running around with the best loot in the game, but the Rust experience is going to be a little skewed for the Easter season.

Here’s everything that will be coming to the game as an item over Easter:

Some of these are purely ornamental, but the Easter Basket will let you instantly scavenge your eggs, while the wearable Bunny Ears and Onesie will give you Egg Vision so you can hunt down eggs easier. Yes, Rust is a hardcore survival game.

Rust is available now for PC.

READ NEXT: How To Use Gestures In Rust