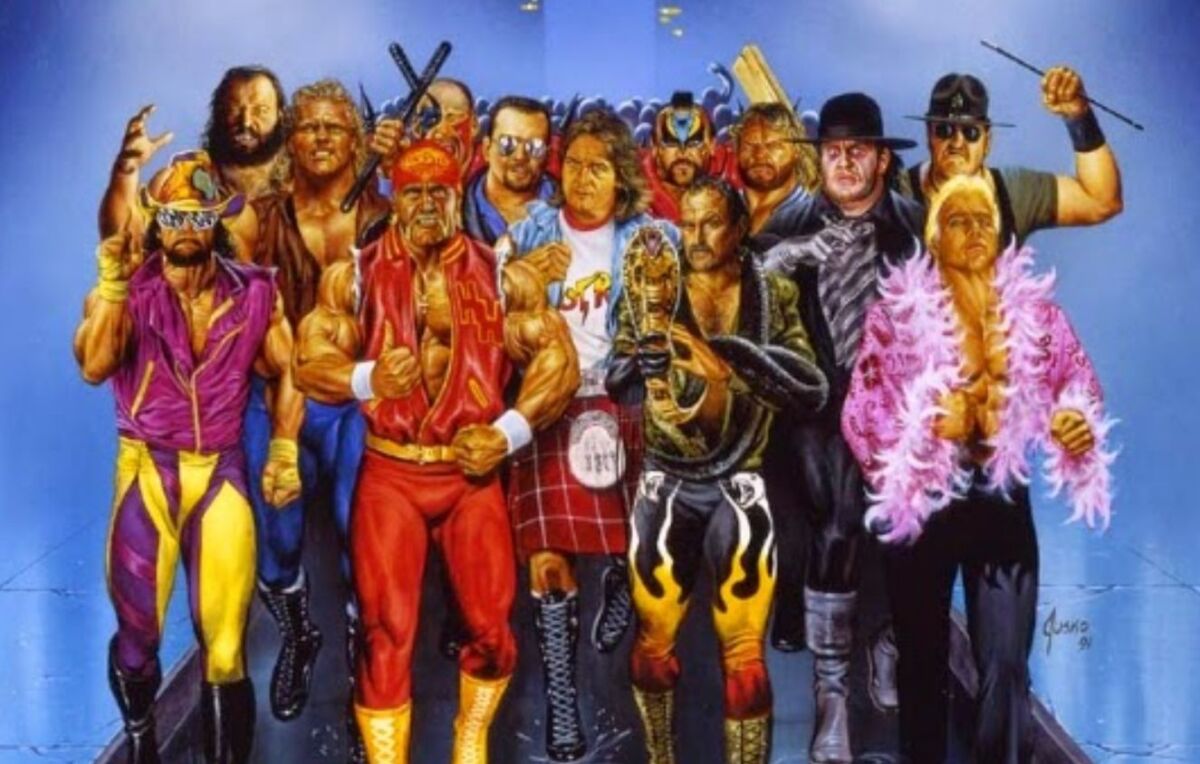 30 Years On, Royal Rumble 1992 Is Still The Rumble Pinnacle

A timeless classic in wrestling as a whole.

30 years on, the 1992 Royal Rumble is still the benchmark that WWE is trying to reach with their annual January spectacular.

The brainchild of serial ideas man Pat Patterson, the Royal Rumble match was still fairly new when January 19, 1992 rolled around. Since it debuted on a house show in 1987, there had only been five Royal Rumble matches. That first event had met with mixed success, but a television special in January 1988 scored the WWF’s biggest rating to that point and saw it promoted to full pay-per-view status in 1989.

Expanded to thirty men, the first three pay-per-view Rumbles were of varying quality. 1989 had a good first half, culminating in the next step of the Hulk Hogan-Randy Savage Mega Powers, but the match crawled to a disappointing close. 1990 was the best of the bunch, featuring the hugely memorable first confrontation between Hogan and the Ultimate Warrior that set up the main event of WrestleMania VI. 1991 fell flat in comparison, with Hulk Hogan unsurprisingly winning for a second year in a row.

1992, however, was on another level. Through a combination of engaging storylines, huge name value and excellent structure, that year’s Rumble created a gold standard.

The big hook for that year’s Rumble match was the WWF Championship being on the line. Two controversial title changes between Hulk Hogan and the Undertaker at Survivor Series and This Tuesday in Texas led to WWF President Jack Tunney declaring the WWF Championship vacant, with the winner of the Rumble being crowned champion. This was the first time the match had serious stakes, and from the following year the now traditional WrestleMania title shot stipulation was added. But that wasn’t on the same level as crowning a new champion that very night.

With the higher stakes, it was no surprise that the list of entrants was one of the strongest assembled. Ten of the thirty competitors held recognised world titles in their careers, during a time when championships did not change hands regularly. Amongst the other twenty competitors were some of the biggest names to never win a world title, such as Ted DiBiase, Jake ‘The Snake’ Roberts and ‘Rowdy’ Roddy Piper.

Not every participant was a serious contender, but the 1992 edition had more viable options than most other Rumbles.

As the last two champions, Hulk Hogan and The Undertaker were strong picks. Jake Roberts and ‘Macho Man’ Randy Savage were involved in perhaps the hottest feud in the company and adding the world title to their issue could have taken it to another level. Roddy Piper was having another renaissance, and his capturing of the Intercontinental title on the undercard led to the interesting narrative of him potentially winning both singles belts in one night. Sid Justice (formerly Vicious) had arrived in the WWF the previous summer and was exactly the kind of larger-than-life charismatic giant that Vince McMahon loved to push – it wouldn’t have surprised many if McMahon elected to have Sid destroy everyone en route to victory.

Even during the Attitude Era heyday of a stacked main event scene, there were no Rumbles where a solid case could be made for six different entrants to win.

Flair had spent the 1980s as the lynchpin of the NWA and was undoubtedly the biggest star of the period who hadn’t spent some time in the WWF. By 1991, he was severely disgruntled in WCW, clashing with Executive Vice-President Jim Herd over numerous issues. This situation came to a head in July, resulting in Flair walking out despite being the WCW champion and debuting in the WWF shortly thereafter.

Declaring himself the ‘Real World’s Champion’ and aligning himself with Bobby ‘The Brain’ Heenan and Mr. Perfect, it was assumed that Flair would face Hulk Hogan in a long-awaited dream match in the main event of WrestleMania VIII. A Flair victory would give him the WWF Championship and allow him to be Hogan’s latest WrestleMania victim.

The crowd – and commentator Bobby Heenan – were shocked when a clearly agitated Flair stomped out as the #3 entry. The earliest someone had previously entered and won the 30-man version of the match was Hulk Hogan’s appearance at #24 in 1991. For Flair to enter so early, it suggested he was not going to win. Heenan excelled in telling this story, putting in the greatest performance of his distinguished commentary career, distraught that Flair’s chances of winning the championship seemed to have been taken away from him by the cruelness of the draw and running the emotional gamut in tandem with Flair’s performance.

Flair then proceeded to put in an hour-long masterclass. Chopping, begging, and cheating, Flair was constantly demanding the audience’s attention, renewing old rivalries with Greg Valentine and the Texas Tornado, wailing in desperation when more recent foes such as Roddy Piper made a beeline for him. Compare the ‘Nature Boy’s’ busyness with Roman Reigns’s lack of movement in the 2016 version, which to date is the only other Rumble where a championship was on the line.

In addition to the through line of Flair’s battle against the odds, the match also featured several well-timed set pieces that meant the match never sagged. As well as the Piper-Flair confrontation, Randy Savage and Jake Roberts continued their rivalry with a typically explosive entrance from the ‘Macho Man’, and Hogan gained some measure of revenge on the Undertaker by eliminating him. The weaving of these personal issues into the main narrative of the battle for the WWF title gave the bout stakes that have rarely been matched in subsequent Rumbles.

After Sid threw out a tussling Martel and Piper, a heavyweight final four of Justice, Randy Savage, Hulk Hogan and a still battling Flair were left standing. This was a very rare occasion where any one of that last quartet would have been a conceivable winner. Indeed, it was these four that were paired up for the double main event of WrestleMania VIII.

After such an expert build up and a virtuoso performance from Flair, the ending lived up to expectations. While many Rumbles can end on somewhat of a whimper with a simple clothesline or Irish whip reversal, the 1992 Royal Rumble ended with an excellent angle.

With Savage gone, Hogan and the ‘Nature Boy’ got into it on the ropes and Justice tried to throw them both out. Flair managed to land on the apron, but Hogan tumbled to the floor, to the approval of the crowd. In one of those typical Hogan moments from the Golden Era where you look back and wonder how on earth he was a babyface, the Hulkster cried foul play, while Sid shrugged his shoulders. With the crowd turning on Hogan, he then grabbed Sid’s arm, looking frantically at the crowd for an approval that was not forthcoming. Ever the opportunist, Flair staggered over and swept Sid off his feet and with Hogan’s help from the outside, Justice went over the top rope — Ric Flair was the new WWF Champion.

In one two-minute spell, the WWF had set up a huge WrestleMania match in Hogan vs. Sid and created a new top heel and champion in Ric Flair. The genius in Flair’s performance was in the fact that he had lasted longer than anyone ever had in the match and fought the whole way, but was still able to come out of the match hated by the fans.

The icing on the 1992 Rumble cake was the new champion’s promo afterwards. His famous “With a tear in my eye…” interview ranks as one of his best, in a career that is littered with some of the greatest promos of all time.

In terms of storyline and emotion, the 1992 Royal Rumble was a masterpiece. Watching it now through 2022 eyes, you may be surprised by the lack of big spots. There are no ingenious elimination saves, no surprising returns, no dominating elimination runs. But it doesn’t need any of that. The storytelling is so strong, the stakes so high, and the character nuances of the main players so truthful that you are hooked from the moment Flair stomps out.

Also working in 1992’s favour is how much of a drop-off there was the following year – 1993 being one of the poorest Rumbles. It wasn’t until Stone Cold Steve Austin’s show stealing turn in 1997 that the Rumble match regained the same excitement and despite strong showings since – 2002, 2007, and 2010 being amongst many people’s favourites – none have managed to pull together the story, stars and stakes of 1992, meaning it still hasn’t been bettered, even thirty years later.