Roppongi No More: What’s Next For SHO And YOH? 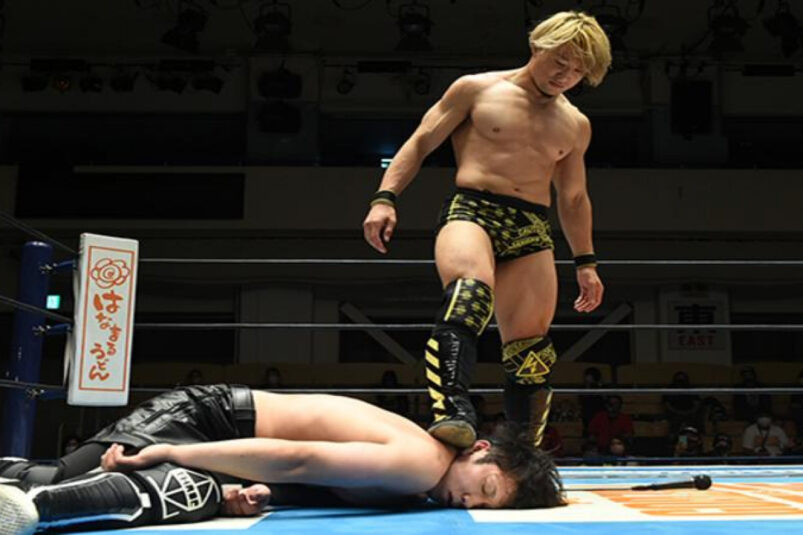 First as Sho Tanaka and Yohei Komastu, then as Raijin and Fujin and finally as SHO and YOH, they’ve had a near 8 year long journey as tag team partners, quickly becoming best friends and one of NJPW’s most successful tag teams.

As Roppongi 3K, they’ve broken records left and right, with Rocky Romero never far away from their corner cheering them on. However, August 2021 marked the end of their partnership, as SHO turned his back on YOH, their friendship and the Roppongi 3K team.

The next chapters of their respective careers will be just as interesting, as SHO and YOH leave the tag ranks for fully fledged junior singles stardom. What exactly these chapters will contain is a very intriguing question.

From CMLL, their excursion took stops in Ring of Honor (where they were christened ‘The Tempura Boyz’) and Revolution Pro Wrestling, before they triumphantly returned to NJPW in October of 2017.

In the aftermath of Roppongi Vice’s dissolution, Rocky Romero was on the lookout for his next project and he found it in the form of the returning Young Lions, Sho Tanaka and Yohei Komastu. With Rocky challenging then IWGP Junior Heavyweight Tag Team Champions, Ricochet and Ryusuke Taguchi, to face the two mystery men he’d be managing at October’s King of Pro Wrestling, the scene was set for a big surprise.

Out came SHO and YOH. Dubbed as Roppongi 3K, and under changed names, the pair captured the IWGP Junior Heavyweight Tag Team titles in their return match.

Since 2017, the pair have enjoyed an astounding 5 IWGP Junior tag title runs, and a record-breaking, back-to-back-to-back 3 Super Jr. Tag Tournament victories from 2017 to 2019. Roppongi 3K have gone down in the history books as one of NJPW’s most decorated tag teams, but all good things must come to an end.

Towards the close of the match, YOH was locked in Despy’s painful Numerous Dos submission, following relentless attacks to his knee throughout the match. However, hope was at hand for YOH as his tag partner broke free of Kanemaru at ringside and got back into the ring, but opted to not break up the cover.

Instead, SHO opted to break up their team.

SHO wouldn’t help his partner, as he dropped to ringside to the befuddlement of the referee, Red Shoes Uno, and El Desperado. SHO left his friend to eventually be put down for the 3 count by Despy, while a stunned Korakuen Hall looked on in disbelief. After the bell tolled, SHO returned to the ring and crushed Roppongi 3K once and for all with a crunching Shock Arrow to YOH that firmly signalled the end.

The split also creates ramifications within the Chaos faction, as SHO has already left the stable for Bullet Club, after his victory over YOH at Wrestle Grand Slam in the MetLife Dome. I still think the best route for this new heel SHO was as the United Empire’s first junior heavyweight, but instead he emigrated to the already bloated Bullet Club faction.

Where Do They Go From Here?

In his new heel form, SHO could well be catapulted to the pinnacle of NJPW’s junior stocks, as he’s already on the precipice of singles glory. An IWGP Junior Heavyweight Championship reign in the near future is certainly a tangible possibility, with breaking up Roppongi 3K perhaps being the trigger SHO needed from his shot at the top.

Of course, SHO and YOH will engage in a singles rivalry which we’ll see the first impressions of at Wrestle Grand Slam in MetLife Dome, in a singles match between the two.

NJPW clearly see SHO as the star of the team, the Shawn Michaels to YOH’s Marty Jannetty, but I think YOH’s potential is widely under appreciated. YOH hasn’t been afforded the same singles opportunities as his former partner, but in the slight flashes we have been greeted with he’s definitely impressed with. YOH carries an intensity in his wrestling, SHO does too, but for me YOH stands out through his strong energy and powerful selling.

YOH could just be the top babyface star the juniors need as Hiromu Takahashi eventually transfers to the heavyweights. SHO turning heel on him could be exactly the push he needs to reach further in the singles division, as he’s no longer tethered to a tag team where he was presented as the lesser figure.

SHO has offered grand reason for hope too, with a duo of strong openweight clashes with Shingo Takagi in 2020 to add to an impressive host of junior singles outings. SHO defeated Takagi in the First Round of the New Japan Cup, before falling short in a valiant effort for the NEVER Openweight Championship at Dominion the following month.

He proved his potential in these two matches alone; fighting an intense, hard-hitting style against one of the world’s best in a sparkling openweight encounter. These skills may come in handy soon enough, as SHO could potentially shift over to the heavyweight ranks, or at least enjoy more openweight ventures in the close future.

After an emotional split, NJPW can take SHO and YOH in many different directions. The fanbase is on board with a heel SHO and babyface YOH, in what could be a big money feud if the cards are played right by the powers that be.

No more does Roppongi 3K stand together as a unified force. A reinvigorated, heel SHO and his crestfallen former-tag team partner, YOH, will undoubtedly cross paths many a time over the coming years – not as allies, but as bitter rivals.

Their story is far from over, though their tag team well and truly is.

READ NEXT: 5 Most Improved NJPW Wrestlers Of 2020