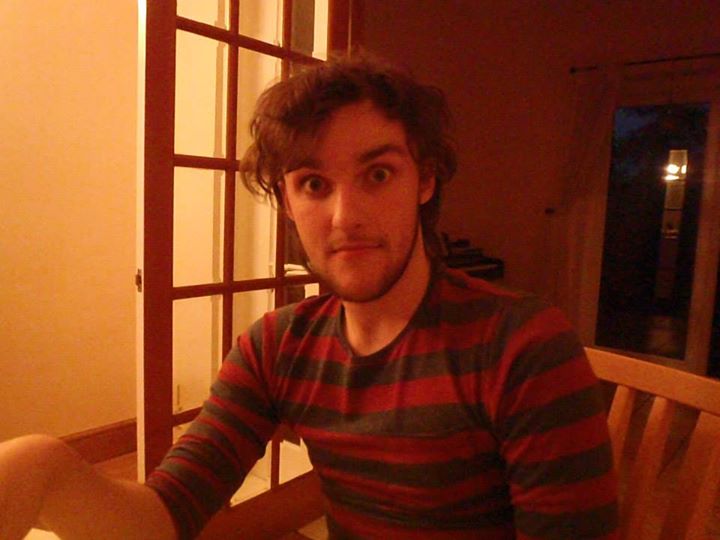 Who are you, where you’re from, and what makes you tick?

I’m Dan(iel, I don’t really mind) Abbott, 21 years of age. I was born and raised in a small Welsh town called Brecon and I haven’t really been able to get away from it since (university withstanding). Nerve endings make me tick, especially when they’re frazzled through lack of sleep.

Why do you write? What got you started?

Why I write what I write depends on the mood I’m in and the content of what I’m writing. Sometimes it’s for some lofty higher purpose of manipulating language to convey meaning and emotion in new, hitherto uncharted ways that are entirely original in nature and not at all artistically plagiarised from other, established authors; other times I write for the fun of it. I write for myself, primarily, though I won’t deny I’ve written a few things for people in my time. There was never an exact point where I thought, “Right, time to do this writing shtick.” No precise moment where everything clicked and writing became the be-all and end-all; no wise mentor to tell me right from wrong and die in the first act. In hindsight it seems to have been a very organic process by which I’d end up just picking a pen and writing whatever came to mind; that’s still the case today. I guess I really started going for it around the age of 14, maybe 13; fortunately, everything that survived the fires of that horrid period is ferreted away for my perusal only. Seriously though it was all shite and I like to think I’m constantly improving.

Who are your biggest influences? Inside and out of literature.

Within literature it’s undoubtedly James Joyce. Beyond maybe Cormac McCarthy, no one else has even come close to chiming with me like Joyce has. When I set myself a challenge to read Ulysses at Christmas 2011, I didn’t think I’d end up finishing the thing off a second time this summer. We’re still catching up with what Joyce achieved with the English language; we need look no further than Finnegans Wake to find some of the most beautiful passages ever put to paper. The trick is reading it out loud. The Greek myths have always been a bedrock for storytelling – Odysseus is probably the single greatest character ever conceived, and I’m not just saying that because of Ulysses.

Outside of literature it would probably be Led Zeppelin. Again, like Joyce with words, their music (pardon the pun) struck a chord with me that resonated – and will continue to resonate – for the rest of my life. David Bowie is a close second and probably the most influential individual musician who’s inspired me the most, particularly his Thin White Duke era from 1975-1977. Videogames are a huge influence on me as well; stuff like the Metal Gear series, Shadow of the Colossus and Final Fantasy – particularly the ninth instalment, less so the thirteenth – have made massive, indelible marks on my personality and ideas and everything in-between.

What would be your favourite poem?

James Joyce – ‘The Needleboats at San Sabba’. He’s not really rated for his poetry – mostly for good reason – but this is just heartbreakingly beautiful; it’s a beauty supplemented by its brevity.

‘Watching the Neeleboats at San Sabba by James Joyce

I heard their young hearts crying
Loveward above the glancing oar
And heard the prairie grasses sighing:
No more, return no more!

I went with five authors because I’m cheating.

Ulysses and Finnegans Wake, both Joyce (I am nothing if not predictable)
Suttree by Cormac McCarthy
Tales of the Greek Heroes and The Tale of Troy, both by Roger Lancelyn Green
Hammer of the Gods by Stephen Davies (strictly speaking a biography but hey)
Heart of Darkness by Joseph Conrad

Do you have a favourite song lyric?

Too many to mention, but off the top of my head: “It’s not the side effects of the cocaine / I’m thinking that it must be love.” – Station to Station, David Bowie. It definitely was the cocaine, by the way. My other off-the-top-of-head choice was from Carouselambra by Led Zeppelin: “Sisters of the wayside bide their time in quiet peace / Await their place within the ring of calm.” That’s poetry. I cheated again, I know. Sorry.

What inspires you/where do you find inspiration most? Are there any themes you feel particular affinity for? Political, personal, etc.

Oftentimes it’s music that motivates me to pick up a pen or start caressing keys, but it’s usually the beauty of nature that inspires me the most. Just being able to look out my window to see the Brecon Beacons in all their stunted splendour is enough to keep me going. Walks along the seafront in Aberystwyth were equally stunning; hills and the sea often find ways to crawl into my poetry, which is fine. They earn their place.

Themes I find myself returning to include ageing, nostalgia, nature, love and loss and, inevitably, myself. I don’t think a poet can ever really divorce themselves from a poem, even if it addresses a completely unrelated subject, especially when it’s such a personal medium. The general brevity and subsequent intensity of the form necessitates that sort of individual stamp, I think. Maybe I’m just a narcissist. Probably.

Do you have a specific technique, or routine to your writing?

It usually involves waiting ‘til it’s four in the morning and the blood vessels start bursting in my eyeballs. I’m rarely able to write during the daytime unless I’m feeling particularly inspired, but when that happens you’d have to chain me down to get me to stop.

Where are you with your writing right now?

In a good place I think. I’m not as prolific as I was a couple of years ago but I’m also more selective. In 2012 I wrote about 50 poems and, reading them back, most of them sound either juvenile or samey. So far this year I’ve written around 13 and there’s a marked improvement, both in variety of subject matter and the actual content itself. I hope.

What are your plans for the future? What’s the ultimate goal?

Having recently graduated from university I’m floating in that liminal graduate bubble of not knowing quite what the fuck to do with my life. Having proofread and written articles for the student newspaper I certainly wouldn’t mind pursuing some kind of journalistic career. Ideally I’d like to continue playing and recording with my band Benign Sun until the Earth regresses to a crusty husk of its former self but we’ll see. As long as I can continue writing in some small regard, I’ll be happy.

What advice would you give to aspiring writers?

Don’t give up. Acknowledge your mistakes and use them to fuel your work. Regret nothing. Don’t whinge. Do write. Exhibition yourself and your work. Don’t label yourself.

Make up your own question to ask yourself. I am that lazy.

What does God need with a starship?

Now that you’ve met the man, it’s only right and proper you meet his work. Toddle onto the next page and enjoy an example of some his poetry.