How Ring Fit Adventure (Sort Of) Helped Me Lose Weight 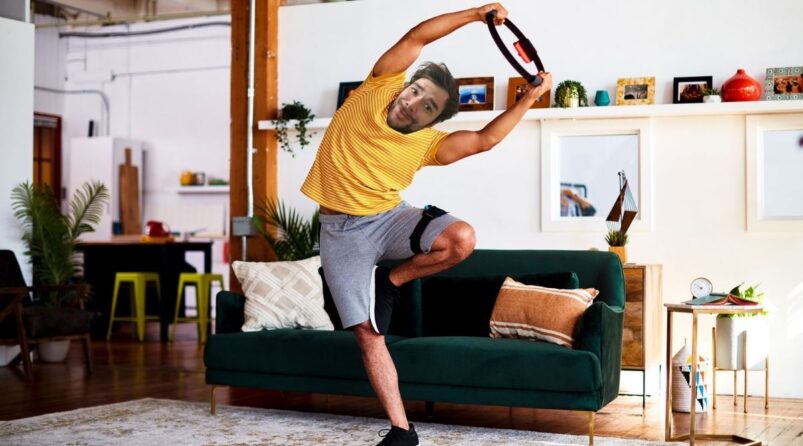 If there’s any one video game company who’s sort of custom-made to help humanity get through a worldwide pandemic, it’s Nintendo. Not only are games like Animal Crossing: New Horizons intended to be an escape from reality, but Nintendo are like the Jamie Oliver of video games in the amount of brain exercises and health workouts they want you to do, just without the patronising tone or general annoyingness of Jamie Oliver.

Like many others, New Horizons was kind of my go-to noise-blocker while the world was not quite on fire, but definitely being doused in petrol. What’s that, cases are rising? So are the prices of my turnips. 300-something hours later, I had my fill and just kind of dropped the game completely — it felt like a completely different life once the black clouds lifted and things started getting normal again. But I’ll never forget New Horizons for its service, or lack thereof when simply trying to go to someone else’s island and it was like using dial-up via cans and strings.

I also wouldn’t be able to forget it thanks to my waistline, which took a battering due to what little exercise I’d do and how much doom-munching I’d get through. New Horizons placated me in a gentle way that made me forget stresses, but it also kind of contributed towards turning me into Snorlax.

As Nintendo had got me through the indoors part of the pandemic so well, I figured I’d turn to them again with us now able to properly go outside and face each other’s judgement. I’m not saying my thighs could start a fire as they clapped and screamed away while I walked down the street, but sales of Vaseline definitely rose once restrictions were lifted. I turned to Ring Fit Adventure, Nintendo’s latest effort in becoming our caring, expensive grandmother to help me shift some of the apocalypse timber.

Ring Fit is another utter oddity that’s fundamentally Nintendo: a literal ring that helps you to get fit. Shaped like a hula hoop, it feels like a less embarrassing Shake Weight that also has a story mode of sorts video game attached to it, just in case you needed to play a fantasy game like Skyrim* as you get trim. Skytrim, if you like.

So, ring in hand and Joy-Con fiddled with in its annoying little thigh compartment, I decided to work up a sweat and try Ring Fit Adventure, which I’d at least planned to make some content with.

I think it nearly killed me.

Barely even five minutes in, I could hardly breathe and things were spinning. My ham hock thighs felt incredibly heavy to lift and using the ring’s “force” motion controls was like trying to squish a mountain. I knew I was unfit, but this micro-session of pain put into perspective just how unfit I was not only from the pandemic, but also because I’d been full goblin mode at my desk for the better part of five years. Turns out that when you just sit down all day and clack away at your keyboard for half a decade, you get very out of shape — why did nobody tell me?

I recoiled in horror from Ring Fit Adventure as it apparently tried to murder me, my heart thumping out of my chest. It was beyond me. After collecting myself, I smoked my last cigarette — a habit I’d had for nearly 15 years — and resolved to change my ways. I combined this with quitting my antidepressants cold turkey, which was beyond a dumb thing to do. Still surprised to this day that quitting smoking and regulated serotonin at the same time didn’t result in me ending up like the ascended woman at the end of Martyrs.

Over the last few months, I’ve been steadily working my way out of my goblin state, taking daily walks and watching my calories. I’ve lost nearly two and a half stone since April this way, though I’ve still got a way to go until I can call myself “fit” — I did a little jog the other day and felt like my skeleton was trying to separate itself from its meat prison.

And a lot of that is owed to Ring Fit Adventure, which galvanised me to get fit with a very harsh lesson. I still live in fear of it, what with it being relegated to the weird cupboard where the electricity meter lives (British people, you know what I mean), but it feels like the final boss that I am grinding towards. In a weird way, Ring Fit Adventure is the best fitness tool out there I could have possibly bought, just not in the conventional sense.

*I know Ring Fit Adventure is exactly nothing like Skyrim, but I thought up the Skytrim pun and had to crowbar it in. I’m not sorry.