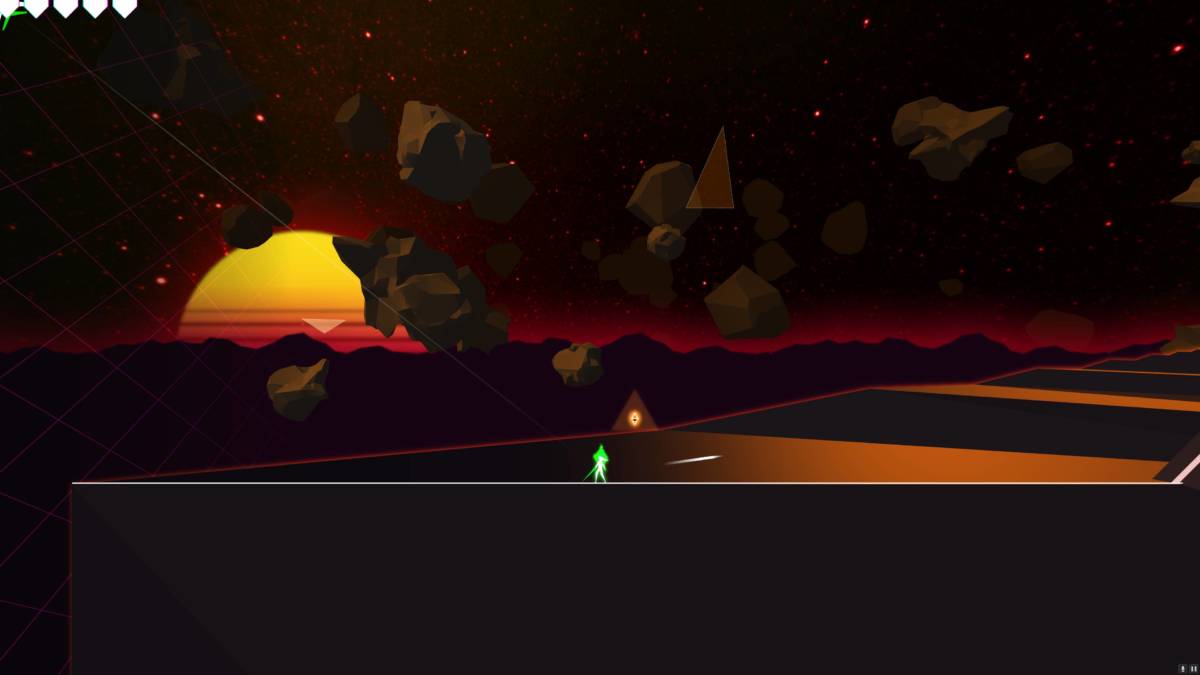 Synthwave is back, and if you blink, it’ll be gone. Rifter is the newest game to take on the 80s inspired aesthetic, using it as a backdrop for an unforgiving game that will kick your ass back to the future if you’re not careful. With a large variety of enemies, several types of hooks and ways to get where you need to be, and a soundtrack that just powers on, no matter how many times you’ve failed on the same level, it’s a hell of a time.

The main gameplay in Rifter is Indiana Jones on acid if Indiana Jones had a small cute robot companion that can speak in emoticons. With the synthwave soundtrack pounding along in the background, you grapple from hook to hook and dash your way to freedom, navigating lasers, enemies, and everything in-between. The further you go along, the more the game adds in terms of complexity: more methods of propulsion, more enemies, more complex versions of mechanics you’ve had for a while.

That’s exactly how the game stays fresh with every level, always finding a different combination of mechanics in a different environment. It’s the small changes that make it interesting, when suddenly things don’t work that worked two levels earlier because of slightly different placement you’ll have to start to think about what you’re doing. In some games, this might cause annoyance, but it’s implemented quite well in Rifter. 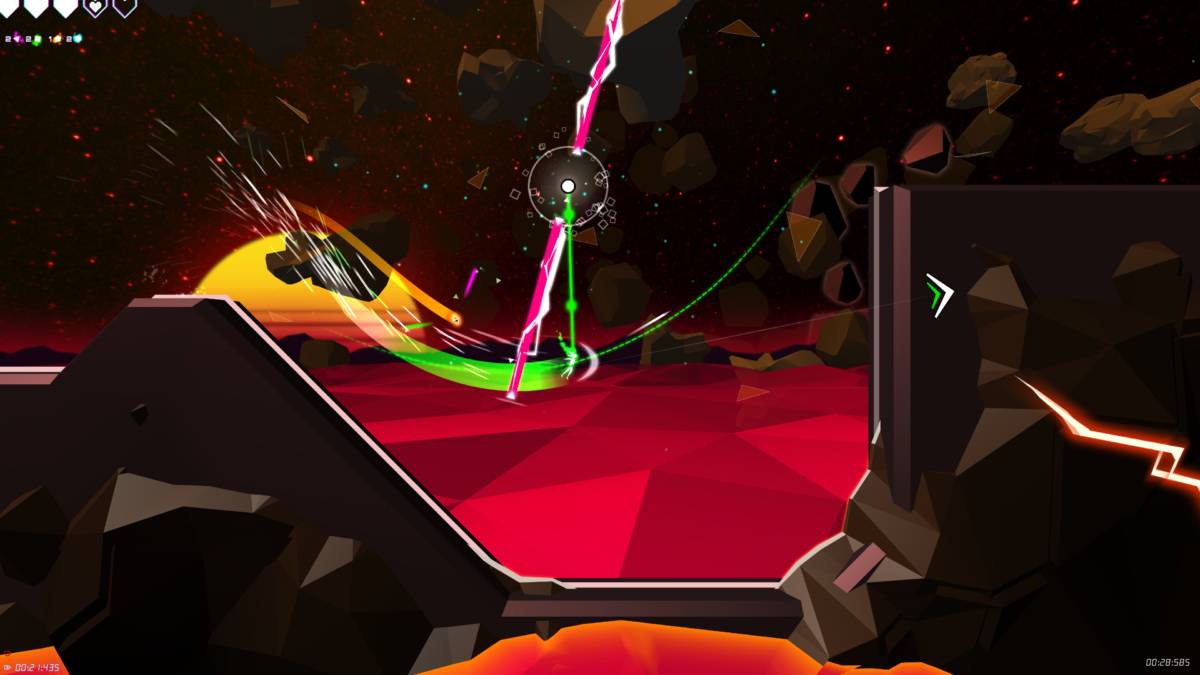 Although it doesn’t really seem to be the case at the start, Rifter is a lot about the enemies, too. As you progress through the game, you’ll bump into and rush through new enemies with different weak points and special weapons of different speeds and trajectories. You always have to make sure you’re ready to react quickly, but not rashly, because not thinking is the best way to die in Rifter, despite what the speed of the game might have you think.

Some games just chuck more of the same enemies with more health and different colouring. Instead, this game forces you to use mechanics you only just learned about on new enemies that occasionally even combine a few of them. Earned a new dash? Have fun with this. Unlocked a whip? Have fun getting close enough to these guys. Without missing a beat, this game stays refreshing and punishing until you’ve beaten the final boss. 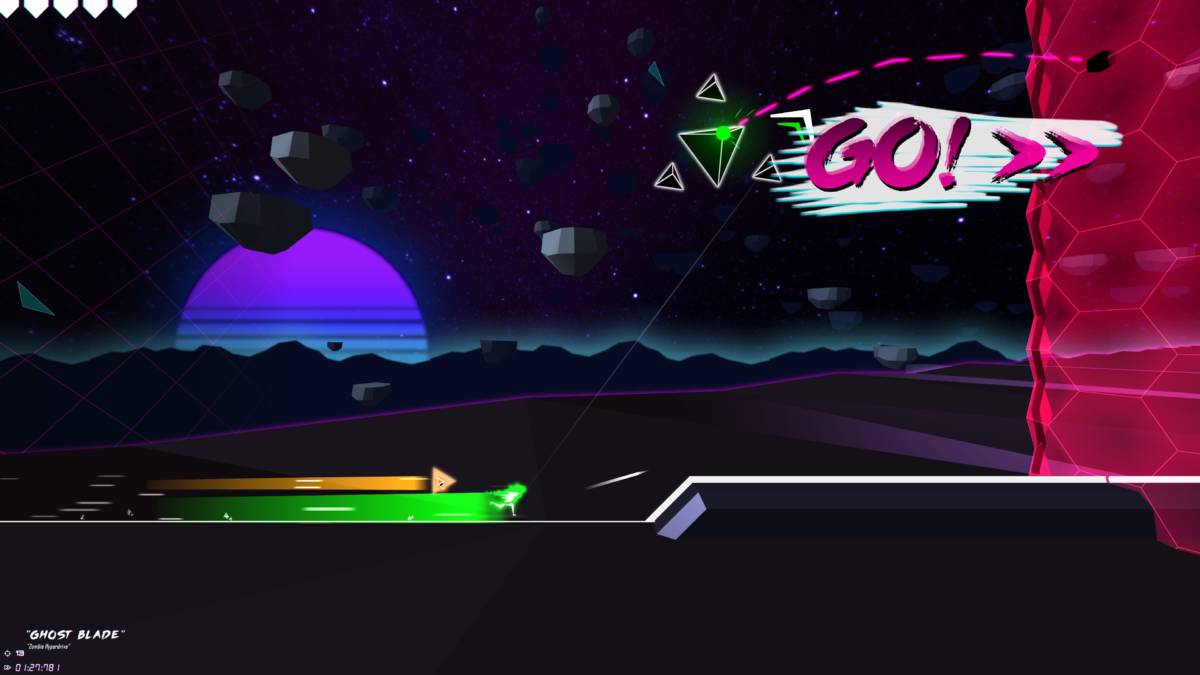 Generally, Rifter is a very fast-paced game. However, the further you go through the game, the more it becomes about precision on top of that. Countless levels will relentlessly slam you to hell and back if you let go of the hook early or start the swing with too much momentum and don’t react quick enough. If this were to change from one level to the next, it’d be horrible, but instead, the game does it quite well by slowly getting you used to smaller and smaller spaces to swing through.

Rifter has a very steep difficulty curve, but it’s still not an unfair one. The game never holds your hand, it pushes you into danger like a mother does a baby bird. You have to learn to fly before you can learn to climb or attack, and if you don’t keep up to speed, you’ll be left behind without a second thought. 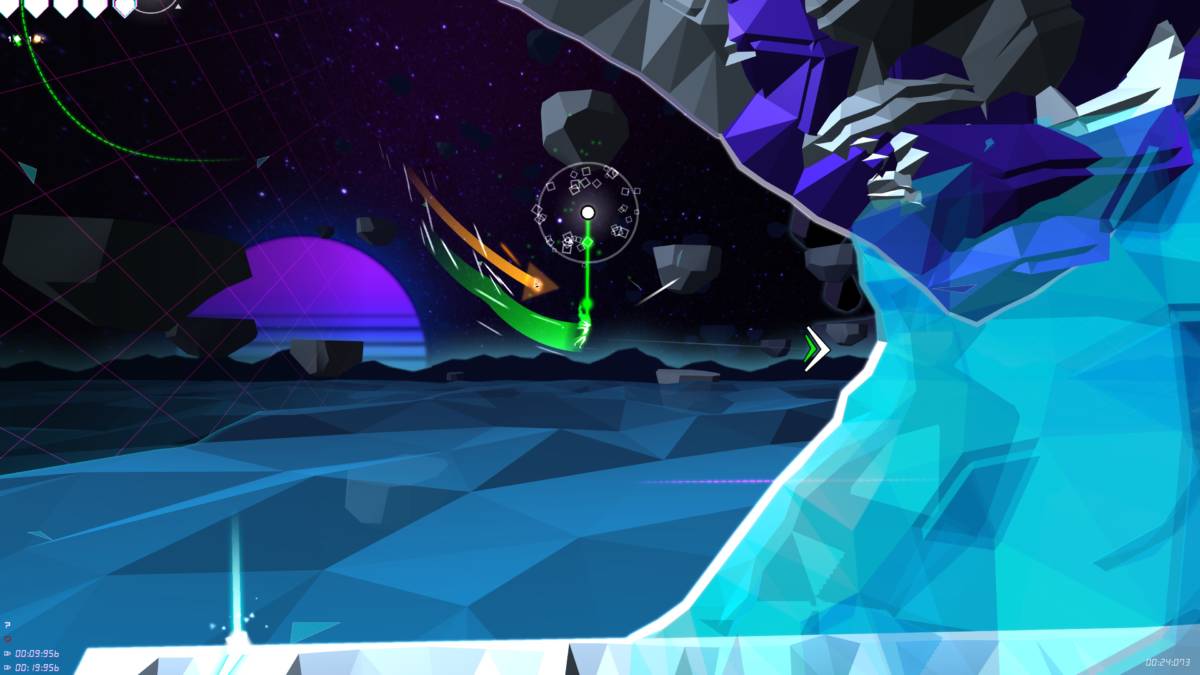 The game itself is split up into three different planets, each with a different style and environment. Each planet is split up into four sets of five levels and an accompanying tower. The tower levels are usually small boss levels, the accumulation of everything you learned up to that level pushed up a notch, with fewer checkpoints. They can make for a serious challenge, depending on how well you did with the previous levels.

On top of the normal progression of levels, you have different series of challenge levels, given to you by the giant, Zip. These can range anywhere from controlled swinging through a tight snaking tunnel to using split-second frames where one mechanic can be used as another. They really test how good you are at the game, but they also greatly reward you. Although you get some in normal levels, the bulk of so-called “shards” that you get, you get from these challenge levels.

There are four different colors of shards: Blue, pink, green, and orange. The first color is used for unlocking more information about the universe you’re in, while the other three are each for a specific branch of skill upgrades with A and Z, which are incredibly useful, to the point where the game is almost impossible if you don’t get at least some of them. Not completely impossible, though, in case you’re feeling up to the challenge. I really don’t recommend it though. 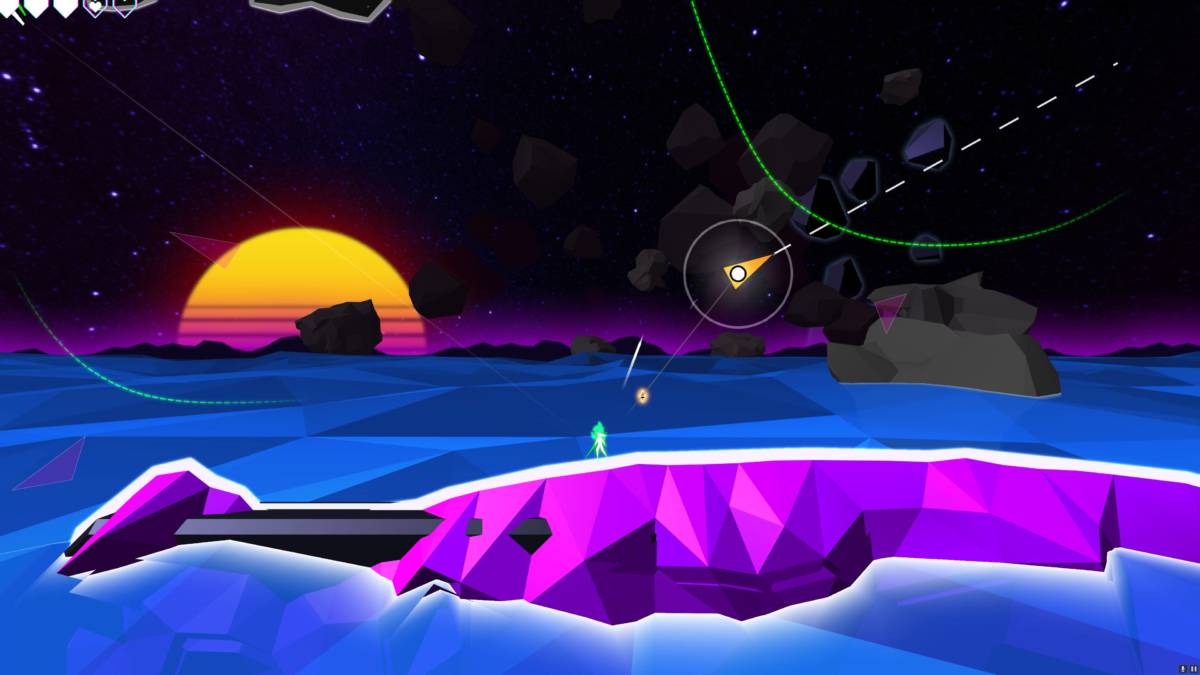 The blue shards are for the optional part of the story, which is actually the bulk. Despite the game not necessarily needing a story, or even seeming like it had one, the game starts to tease you with its narrative, then makes you work for it. You can end the game without really paying attention to the blue shards, you’ll get through just fine, but you’ll be left with a nagging feeling saying: “what if I found out the truth?” As mentioned, the game would have already worked splendidly as just a collection of levels, but by hiding further endings behind a progression barrier, it doesn’t let you go until you’ve mastered every inch.

Rifter is a whole lot of fun because everything works so carefully together. The whole game relies on making you better, then forcing you to rethink your strategy, and this wouldn’t work without the constant changes in level structure, mechanics and enemies. It is really fun to play, unforgivingly difficult and packed to the brim with replay value and well thought out levels. It knows exactly when it is about to get repetitive and veers off that path every time at just the right moment, plunging you right into unfamiliar waters again.

Verdict
Despite, or maybe even because the game is so relentless, Rifter is such a rewarding experience, making each level a cause for celebration while simultaneously hitting you with your next eulogy. Microtransactions: none
9