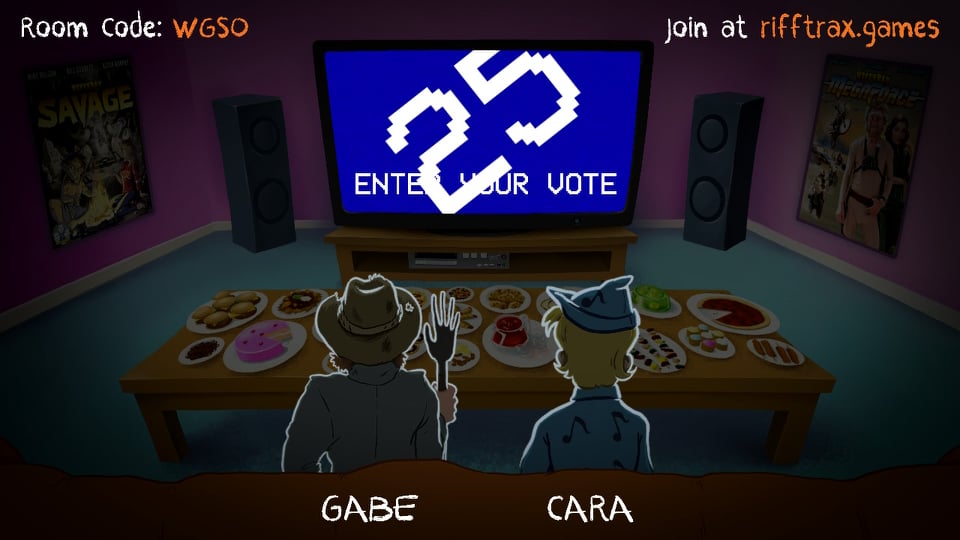 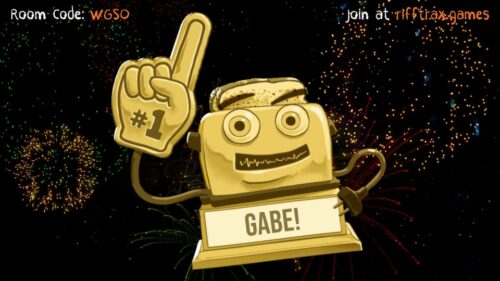 Replay value is everything with party games. An enjoyable hour with a game that brings together your friends is great, but there also needs to be enough actual content to bring you back later. RiffTrax: The Game answers this with a surprisingly deep library of clips from 15+ years of riffing on everything from Hollywood hits, to old industrial/educational short subjects, to schlock horror in the vein of the group’s Mystery Science Theater 3000 heyday.

For those who don’t know, RiffTrax is a group of writers and performers who have enjoyed long careers in the art of watching and reacting to some of the worst movies ever made. If you’ve heard of Mystery Science Theater, then you’re already familiar with the core of what RiffTrax brings to movie riffing (which is responding to something you’re watching with quips and jokes).

RiffTrax: The Game itself focuses on their B-movie and short subject output, with over 250 clips available at the time of this writing (more are expected to be added as time goes on). From there you have over 2000 pre-written riffs (featuring the talents of RiffTrax writers/performers Michael J. Nelson, Kevin Murphy, and Bill Corbett) that can be used during a round. If you don’t want to choose riffs, you also have the ability to write your own, which makes up the second mode.

Between the two modes, which can feature up to 6 additional players (either in-person or online), with an additional 12 slots for participating audience members, you’re not going to be bored anytime soon. Across several sessions with members of my household, we never saw the same clip twice in either mode. Riffs occasionally reappeared, but this was more often than not a good thing.

RiffTrax: The Game could be compared to What the Dub?!, as both were created by the same company, and both revolve around responding to random film clips with personalized or preloaded quips. However, RiffTrax: The Game differs in several ways, including deeper gameplay options, a truly unique collection of clips, and the inherent humor of the RiffTrax brand itself. Fans of RiffTrax in particular are going to love how brilliantly Wide Right Interactive has built something around what you know and adore about some of your favorite movie riffers.

At the same time, this game can even be enjoyed by those who have never watched RiffTrax before. Your mileage may vary if you’re one of these people, as the humor generally plays a little dryer than something like What the Dub?!, but the designers and RiffTrax both clearly went to great lengths to make the game as inclusive as possible. You don’t need to know the movies themselves, or any sort of context for these clips. They work well on their own, and you’re generally going to find it easy to come up with humorous responses.

The two main gameplay modes offer two distinct and entertaining approaches to the same basic concept. If you choose to write your own riffs, which proved easy for everyone who participated in my sessions, you’ll find the clips are versatile to the tone of the people you’re playing with. The robot voice that reads your masterpiece out is adept at complex sentences and words. It rarely stumbles, although the times in which it does just adds to the entertainment.

The game naturally works best with as many people playing as possible. Playing through several 2 and 3-player sessions, I found RiffTrax: The Game to be extremely enjoyable. There’s still a distinction between the fun of 2 players and 3 players, and that difference only increases as you add more people. Luckily, the game includes both online and in-person players to join the fun. It won’t be hard to get a regular game going with your friends, if you’re looking for a party game you could introduce them to. The ability for audience members to participate in just voting for the best riffs is also a nice touch. 2-player games can even get in on the voting feature by allowing the game’s “Riff Bot” to participate in submitting its own riffs. Just keep in mind that you may find yourself voting for the bot a lot of the time.

Keep in mind as well that the game supports Twitch stream integration. While this wasn’t tested for this review, the options and features for this mechanic were myriad and straightforward.

Combining a massive collection of clips and jokes (as well as the ability to craft your own), and two entertaining modes with cross-play, remote gaming, and in-game voice chat makes for an attractive package. RiffTrax: The Game is a must-have for fans of RiffTrax, MST3K, or movie riffing in general. Casual players won’t care if they’re playing as Torgo or Mr. B. Natural — they’ll be too busy writing or choosing riffs to be bothered.

You may even feel compelled to watch some of the RiffTrax releases these are drawn from. To be sure, nightmare fuel classics like Rollergator and Attack of the Super Monsters deserve to be experienced in all of their hilarious bad movie glory. The game doesn’t force you to riff them in their entirety, although that could be a fun idea for the future.

RiffTrax: The Game  is a rare party game that will appeal to two completely different groups of people. Fans are going to be happy to have the chance to write or choose a riff for some of the worst movies ever riffed by the group. Pretty much everyone else will have fun coming up with things to say about some of the most bizarre clips they’ve ever seen. You may find that your sense of humor is vastly preferred to the dryer tone of the written/performed riffs. Really, the only vaguely negative thing about this game you can say is that if you don’t at least chuckle after a session of choosing from preloaded riffs, you’re probably not going to try out that part of the game very often. That still leaves you with a pretty good game, though.

Everyone will certainly like the game’s pleasing presentation, filled with easter eggs for fans and an engaging announcer played by RiffTrax writer/performer Bridget Nelson. You’re also going to be glad the game provides you with a variety of options to give you more or less time to write a riff, how many times a clip is played, and more.

RiffTrax: The Game proves how good a party game can be when just about everyone can play. You’re likely to find a style within one of the two modes that works for you, and the game promises the same fun regardless. This is an ambitious effort with a good deal to offer.

Verdict
In the realm of party games, RiffTrax: The Game can be an absolute blast with your friends. However, its particular brand of movie riffing may not be for everyone, as the tone of the written material is a bit drier than something like What the Dub?!
8
Cultured Vultures is a pop culture website established in 2013 covering all things gaming, movies, and more. We eat your words.
All The News On The Biggest Games