Sofia Coppola's debut film is still as lush and mesmerising as it was two decades ago. 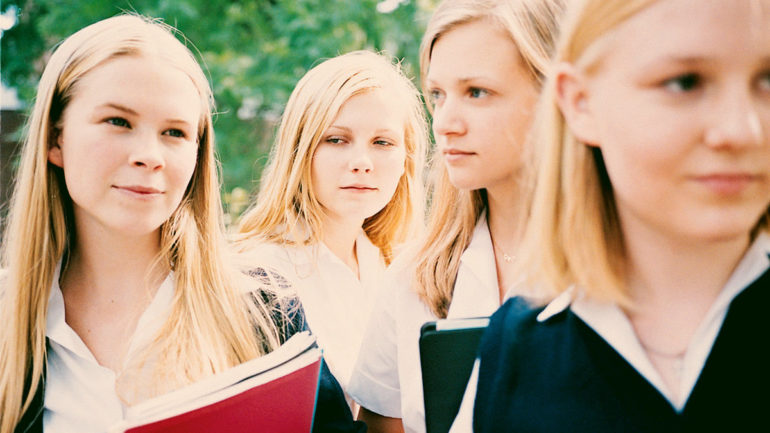 Most would view Lost in Translation as Sofia Coppola’s definitive work, considering the critical acclaim it received when first released; it is also a movie that won Coppola an Oscar for Best Original Screenplay. The Virgin Suicides is Coppola’s first attempt at filmmaking, and while it is certified fresh on Rotten Tomatoes, there are some that feel that this film hasn’t yet showcased what she can do as a filmmaker, claiming that The Virgin Suicides is all style and no substance.

This never made sense to me because Coppola’s stylish flourishes and mesmerising visuals actually help carry the weight of the narrative. It is the film I prefer between the two, rewatching it every few years, haunted by this poignant tale of female adolescence.

The film begins on a tragic note, with the youngest Lisbon sister Cecilia (Hanna Hall) taking her life about fifteen minutes into the movie. Having watched the film before and knowing what comes after, this time I watch Cecelia carefully during the party scene, trying to find a reason behind her jumping to her death from her bedroom window. The symbolism of her clothing must be noted, a vintage wedding dress chopped off at the knees, the white of course to symbolise her purity but at the same time, it is also a wedding dress, as if Cecilia has lived a whole life within her head, therefore making her feel too exhausted to deal with the one she actually has to live out.

We see her looking so detached and distant from everything, everyone else enjoying themselves at the party that was thrown for her. She has to pretty herself up and cover her bandaged wrists (from her first suicide attempt) with bracelets, but at the end we see her requesting to leave the party, removing these bracelets from her hands, showing the wounds her parents want her to cover up, refusing to pretend any longer.

Coppola’s choice to give us short glimpses of Cecilia’s body impaled on the fence before cutting away to show the family’s reactions, as well as the reactions of the boys who were at the party, cements the whole event as a tragedy above all else; we lament Cecilia’s loss more than gape at the sheer horror of her death. Her passing becomes a haunting that is unshakeable, conveyed to us through the ghostly sightings of her in the neighbourhood.

If the Lisbon girls are the centre of the film, then the group of boys enamoured and curious about them linger in the peripheries, collecting souvenirs associated with the girls, trying to decode their feminine mystique. They manage to get their hands on Cecilia’s journal and spend hours on it, desperate for insight into the lives of the Lisbon girls.

Therein lies the problem, for they see the girls as extensions of their own desire, and not as agent individuals. While the girls dominate the film visually, wrapped in idyllic golden images of frolic and lush sunshine, they don’t really have voices in a film that is supposed to be about them. The narrator is a man, and Coppola gives us snippets of interviews with boys who had interactions with the girls, which come across as immensely unreliable. The idealisation of the girls is noted here, where they are placed on pedestals constructed on illusive perceptions.

The film showcases this most prominently with Trip (Josh Harnett) and Lux’s (Kirsten Dunst) relationship, his pursuit of her driven by her indifference and her beauty, the former the one aspect making her stand out in an assembly of girls who desire Trip so ardently. Coppola sets up erotically charged atmospheres between the two, the first in a theatrette in school, where the two sit side by side in silence with the briefest touch of hands, and later on when Trip visits their home to ask Lux out, and the family just happens to be watching an animal documentary, making us laugh into our hands as we see the lions involved in their mating rituals, Coppola basically spelling out for us what is obviously on Trip’s mind.

Mr Lisbon agrees that Trip will be able to take his daughter to homecoming if his other daughters can go too, with Trip tasked with finding other boys to take Bonnie (Chelsie Swain), Mary (A.J Cook) and Therese (Leslie Hayman). The boys are all too eager to help Trip out, and once again we see that the girls are treated as commodities, passed off to each boy without any sense of interest on their end. The boys don’t know anything about them and vice versa. The girls make an effort to go beyond the superficial interactions, seen in how Mary tries to engage in small talk with her date and Bonnie kisses hers, but none of this culminates into anything meaningful.

The prom scenes are portrayed as this romantic dream – Trip and Lux are crowned king and queen, ‘Come Sail Away’ plays as they share their first dance, a flurry of blue and white balloons filling the moment with enchantment and magic. We fly with them on such heights only to be brought to the lowest of lows in the following scene. All the romantic blue visuals turn into a bleak despair when we see Lux abandoned by Trip in the middle of the field. You see, when Lux was distant and out of Trip’s reach, she was a desirable object to him, but the moment she becomes an active agent in her own desire, giving herself physically to him because she wants to, he has no need for her after.

Coppola’s revenge comes in the form of older Trip, who had a chance to live the years that Lux never got a chance to, yet we see that he remains maladjusted as ever, stuck in rehab and still reminiscing over the love he shared with Lux that he labels once in a lifetime despite knowingly walking away from it.

After Lux’s indiscretion, the rules and boundaries that surround the girls tighten, suffocating and smothering rather than nurturing and understanding. Their stance on parenting is based solely on protecting, that their job is to shield the girls from external situations that may harm them, but with very little understanding of their interior world. After Cecilia’s suicide, they remove the fence, as if the fence is the offending object that killed her, when it is really Cecilia being unable to cope with her physical reality. Mr and Mrs Lisbon throw down the full force of their protective ring around the remaining girls after homecoming, removing them from school, creating a prison in their home space.

Their refusal to deal with the girls’ emerging sexual identities is to the detriment of all involved. Lux’s increased sexual promiscuity is a cry for help as well as a show of rebellion, a way for her to have a little sense of agency in her life, even when it rings with hollowness. However, the boys treat this as a spectacle, all clamouring to see who she is consorting with on the roof each night. What I notice instead is Lux’s deep sadness, an ennui working its way deep into her soul, to eventually cement itself as ineradicable.

The final symbolism lies in the sick tree that stands at the front of the Lisbon house, the tree Cecilia imprinted her hand on before she died. The girls protest the cutting down off the tree, and the parents question how these men even know that the tree is sick. The protests are in vain, for the tree is cut down because of fears that its sickness will contaminate the rest of the trees in the community. The intent here is clear; because Mr and Mrs Lisbon were in denial about Cecilia’s mental health struggles, this ennui eventually took the other girls as well, as they end their lives in a suicide pact.

There is irony in the concluding moments, for the boys think they are rescuing the girls in some way, white knighting their way into their lives. They sneak over to the house, promising the girls a night of fun on a full tank of gas, and they finally get to enter that hallowed space where the girls exist, only for Bonnie, Mary, Lux and Therese to exit that space immediately after. And just like that, all five Lisbon girls were lost, dispersing through the wind like fallen petals.

The recognition here is that they never needed anyone to rescue them, all they needed was the space to be girls allowed to grow into women, their bodies not subjected to the male gaze or the smothering eye of parental authority. But this was not to be, and that is the tragedy we are meant to reflect on. Coppola achieves much depth with her stylistic touches, allowing us to grieve what the girls never got to be, as well as lament that we never really knew them, but oh how we wish we did.