REVIEW: Wish I Was Here 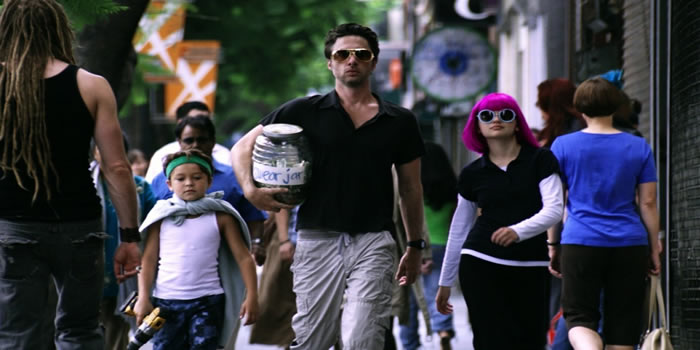 When the low budget, independent Garden State was released over 10 years ago, it was hard to fathom that Zach Braff, well known for playing goofy Dr. John ‘J.D.’ Dorian on NBC’s Scrubs, was the man behind the camera. Garden State was met with overwhelmingly positive reviews, complimenting Braff’s directorial style for his big screen debut, the solid script and casting, as well as the film’s soundtrack, which eventually picked up a Grammy Award.

In April 2013, Zach Braff launched a campaign to fund his latest project, titled Wish I Was Here – an original story based on real life experiences, co-written with his brother, Adam Braff. What followed was arguably the most successful Kickstarter campaign to date (although, perhaps Veronica Mars could take that title too), with an ambitious goal of $2 million reached within the first 3 days. The end product is a film as rewarding for the man who imagined it as for those who financed it.

Wish I Was Here follows Aidan Bloom (Braff), a struggling actor and father of two as he navigates the difficulties surrounding ambition, religion, family and death. Wife Sarah (Kate Hudson) steadies the family as she works a tedious office job in order to provide for their kids, Grace (Joey King) and Tucker (Pierce Gagnon), whilst Aidan’s father Gabe (Mandy Patinkin) offers financial support in the form of the children’s education.

The film picks up as Gabe reveals his cancer has returned, and has so opted to put the remainder of his money into his treatment, meaning his grandchildren can no longer afford to attend their Orthodox Jewish school. Faced with the difficult decision of giving up his acting ambitions and the prospect of sending his children to a different school, he begins home-schooling his children, and so the plot unfolds from here.

Ultimately, it shouldn’t be just the plot that viewers take away from this film, as Wish I Was Here refrains from large set pieces and instead employs genuine character issues and emotions, brought fantastically to life by the on screen performances. For instance, Patinkin is exceptionally brilliant in his portrayal of a dying grandfather, Hudson is in her best role since Almost Famous, and King is such a fine talent that it’s hard to believe she’s only 15. Elsewhere, there’s room for a performances from some of Braff’s friends too; Jim Parsons (Sheldon Cooper – The Big Bang Theory) features as fellow struggling actor Paul, whilst Donald Faison (Chris Turk – Scrubs) cameos as a car salesman.

It’s hard not to draw comparisons to Braff’s other big directorial feature in Garden State, given that both films carry a heavy personal weight to the director. Whilst Garden State explores the nature of ‘self-discovery’ – so to speak – in Braff’s home state of New Jersey, Wish I Was Here largely concentrates on religious (and in particular, Jewish) values which were no doubt instrumental throughout his childhood and upbringing. Having been jointly penned with his brother, the script itself holds great sentimentalism too, and Braff’s opening narration detailing his childhood memories of pretending to be superheroes further underlines the genuine and personal qualities of this film. Even the music, which serves as a beautiful accompaniment to the film’s more tender moments, features largely the same tone – and in some cases the same artists – as Braff’s hand picked numbers on Garden State‘s soundtrack.

It wouldn’t be far wrong to suggest that Wish I Was Here walks a familiar narrative line that has been well trodden in recent years – the likes of (500) Days of Summer and Away We Go spring to mind especially – and you can’t help but feel the decade-long wait between Braff’s two main releases haven’t helped this cause either. Indeed, WIWH delves deep enough into a range of different relationships and issues – childhood, parenthood, dreams, careers, education, religion, death – yet it’s hard to shake the feeling that the film comes up just a bit too short in some of these areas, and is outweighed by its own ambition, which is a shame, given Braff’s audacity in the first place.

Despite all of this, Wish I Was Here largely succeeds overall – it’s touching yet funny, the casting is superb, and although it only verges on the brink of originality, it’s a real credit to Braff to deliver another moving film, especially with the added pressure of his Kickstarter success.

This film is more than just a situational feel-good flick for fans of Zach Braff’s previous features; in truth, it offers a lot more than that. Wish I Was Here details the journey of a man facing an identity crisis, as he struggles to balance the dreams of his youth with the realities of his present. This is a film that takes the most basic principle of human coexistence – family – and teaches us to remember the importance of this. Whilst it’s almost too obviously spoonfed at times, it’s the honesty and truthfulness of this outing that will resonate with all who see this film.