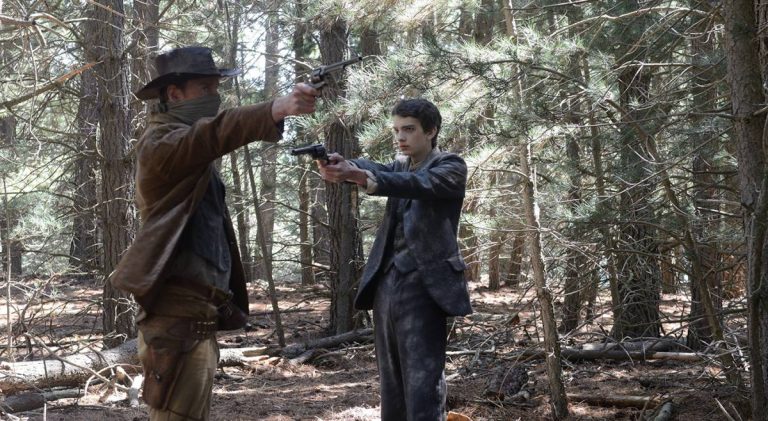 In Slow West, the violence is sparse, and doesn’t bog down the story. Maclean’s core commitment is to telling a deceptively nuanced story in a personable manner. For the most part, the film balances its quirky, off-centre approach with a structural adherence to the classical vein of a minimalist Western.

As-of-late, the Western has had a mini-renaissance. Neo-Westerns are a hybrid genre; heavily injected with tones of non-Western mysticism, while alluding to the cosmic scope of Greek tragedy. While this has always been inchoate in the genre’s capacity for subtext, recent efforts have fulfilled this potentiality.

Neo-Westerns transcend the standard trope of familial dynamics confronting the existential risk of frontier living. Instead, these films are canvases for lucid meditation on human destiny. This intellectual gravitas can be found in films like John Hillcoat’s The Proposition, Jim Jarmusch’s Dead Man, and, more recently, Kristian Levring’s The Salvation. Fresh and visually compelling, these films improve on the parochial predictability of classical westerns.

Slow West clearly falls into this kinetic sub-genre with its poised, metaphysical musings. The film’s story centres on a precocious, aspiring intellectual Jay Cavendish (Kodi Smit-McPhee) as he pursues the apple of his eye, the robust, pugnacious Scottish darling, Rose (Caren Pistorius). Bumping into an outlaw named Silas Selleck (Michael Fassbender), the plot thickens when Silas decides to accompany Cavendish on his journey, privy to the bounty that hangs over Rose’s head.

As the plot unfolds, the voice of experience, Silas, looks to temper Jay’s child-like idealism. Jay, ultimately, suffers a Goethean case of unrequited love – with his journey enacting as both a deterministic path (in his visions), and a hard learning curve (Silas imparts a crash course on the hard reality of life). Implicit in their union is the life lesson that the man of action is a pragmatic survivor, a realist, while the man of letter, all too often – vulnerable to external threats and the vicissitudes of time – must adapt or die.

At times the film teeters on stilted indie low-fi territory; with its jovial music and self-knowing flashbacks, but the film remains quietly sincere and much of its arthouse aesthetic isn’t the kind that demands attention via film student signalling cues. The film’s pacing is clever, episodic, and graphic novel like in the clarity of its story telling. The acting across the board is strong, and the emotive hooks never feel forced, in fact they’ll surprise you with their understated power.