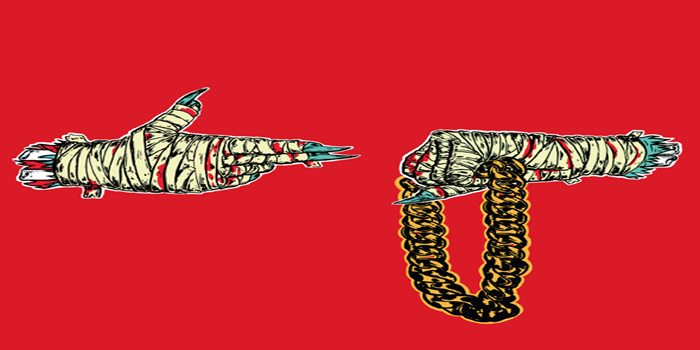 “I’ve been here making raw shit and never asked to be lauded/ Run The Jewels is the answer, your question is WHAT’S POPPIN?!” –El-P, Jeopardy

For the past few months, I’ve woken up almost every day with “Blockbuster Night Part 1” stuck in my head, putting me in the zone to tackle any challenge my day might bring.  Before that single was released, I’ve had the first Run The Jewels album in heavy rotation since it came out in the spring of 2013.  In the realm of hip-hop, I think Run The Jewels has indeed been “what’s poppin’” for a while now.

It started in 2012, when El-P produced one of Killer Mike’s most successful solo albums, R.A.P. Music.  They then formed the group Run The Jewels, with El-P keeping his producer title while also joining Mike on the mic.  The collaboration looked weird on paper at first, because they had such contrasting styles as solo artists, but the first album turned out to be gold (despite being released on Fool’s Gold Records, hehe).  The marketing plan for the album was brilliant too, with the option of downloading it for free, the hilarious music videos, and the awesome tour where they both performed as their own opening acts (with solo sets).  I don’t know the details behind how well it worked out financially, but it made being a Run The Jewels fan easy and enjoyable.

A year after that first album, they’re now back with the sequel, and a similar yet updated marketing plan. They drew attention with a bunch of expensive, ridiculous pre-order packages that seemed like a joke, but have gathered enough interest to make at least one of them a reality.  The album itself had a release date of October 27th on Nas’ new Mass Appeal Records, but always ones to put their fans first, Run The Jewels made it available for free download almost a week early.  You would think the option of a free download would cripple them, but Run The Jewels are setting an example of how to grow a loyal fan base.  I’m excited to catch them on tour in November, but for now, let’s just get into the album!

The way this album starts is like being slapped awake with a bucket of Red Bull, as Mike gets himself turnt up in the booth and lets us know we’re about to witness history at the start of “Jeopardy”. He then proceeds to spit one of the greatest braggadocios verses of his career over a bass-heavy El-P beat, progressively getting more aggressive as the beat builds.   The album then continues into the previously leaked singles, all high-energy tracks with “Oh My Darling Don’t Cry”, “Blockbuster Night Part 1”, and “Close Your Eyes (And Count to Fuck)”.  While the first three songs showcase lyrical mayhem as Mike & El-P trade verses, the next three are more structured with addicting choruses.  Zack De La Rocha provides a Run The Jewels anthem with his sampled hook on “Close Your Eyes”, “All My Life” has a more mellow, sung chorus, and there’s the addicting chant backed by chipmunk vocals on “Lie, Cheat, Steal”.

Halfway through the album, it seems to have the same theme of sex, drugs, and rock n’ roll from the first album; but then they show a more conscious side on “Early”, a song about police brutality. The production also gets progressively larger-sounding as we move towards the end of the album.  We get another braggadocios track with the Travis Barker-assisted “All Due Respect” before the highly sexual “Love Again (Akinyele Back)”.  The ridiculous chorus on this song repeats the lyrics “she got that dick in her mouth all day”, but it was a nice touch having Gangsta Boo bring the female version of this at the end of the song.  It’s probably my least favourite track on the album, but I get that they needed something like this to cover all their bases.

The last couple songs have that epic feeling to them that El-P has mastered as a producer. “Crown” sounds like an acid trip, like they hijacked the Beatles’ Yellow Submarine and flew it into outer space.  Even though the sound is a trip into space, the content of the song is really down to Earth.  Fittingly enough, after the acid trip is the closing track: “Angel Duster”.  It’s a more serious ending similar to “A Christmas Fucking Miracle” on the first album, but has a larger sound to it.

Overall, I think Killer Mike & El-P have done it again! There are many similarities between Run The Jewels 2 and Run The Jewels.  Both albums are less than forty minutes, but there isn’t one minute wasted as they’re both entertaining from front to back.  The sequencing on Run The Jewels 2 is brilliant too, as it doesn’t feel like playing a collection of songs, but sounds more like a continuous stream of music.  Each song flows effortlessly into the next, and if you don’t have a screen in front of you, it may be hard to tell when one song ends and another begins.

El-P and Killer Mike continue to complement each other well as emcees, and I think they let more of their individual styles shine on this album. They gave us the same ignorant style from the first album, but also brought more of their deep, thought-provoking sides they’re individually known for.  It’s too early to say whether I like this better than the last album, but I can say it’s at least on par with it.  Just as last time, I think this is a contender for Album of the Year, and I’m left feeling excited to see what Run The Jewels does next.